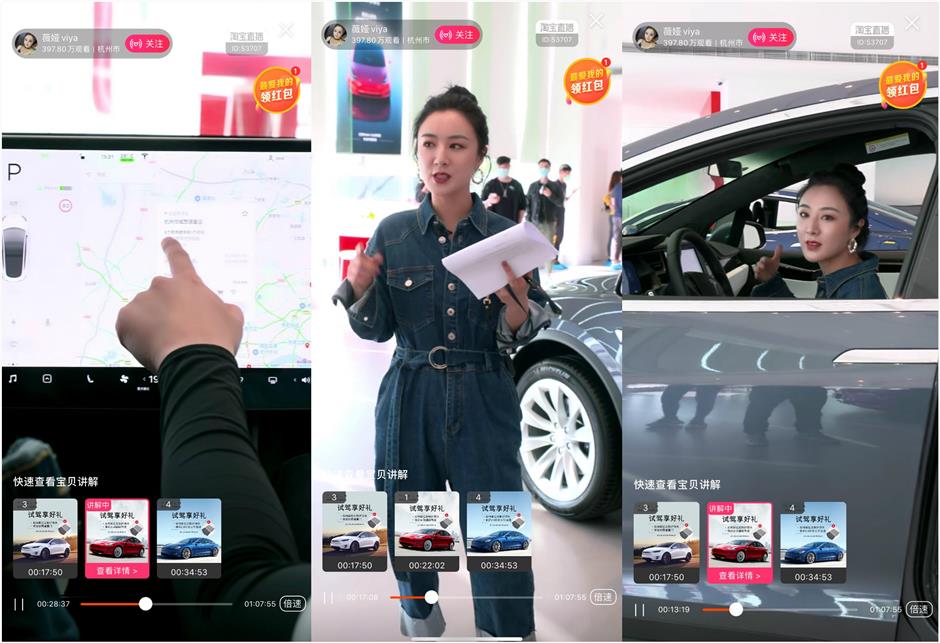 Wei Ya hosts a livestream to introduce Tesla vehicles to almost 4 million viewers.

US electric carmaker Tesla recently invited Wei Ya, who sells products on Alibaba’s Taobao, to promote its vehicles online.

Wei Ya enjoys huge popularity and record-breaking sales on the online retail site. Her broadcasts sell a wide range of goods, from cosmetics and clothes to film and concert tickets.

On April 28, Tesla invited Wei Ya to host an hourlong livestream. Her presentation of its vehicles, their performance and prices attracted nearly 4 million viewers.

The broadcast was not selling cars, but test drives and accessories such as interior kits, performance pedals and road safety and rescue kits.

According to Tencent Auto, Tesla sold 3,863 test drives for its Model S, Model X and Model 3. Test drives cost just 1 yuan (1 US cent). The Model 3 proved the most popular with 1,883 people applying for a test drive.

Tesla opened its virtual store on Alibaba Group's Tmall website on April 16, its first official sales channel on a third-party platform in the Chinese market.

Even before the COVID-19 outbreak, carmakers were embracing livestreaming as a way to sell vehicles. They have been opening accounts on platforms such as short video sharing app Douyin and Taobao since last year. The COVID-19 situation has accelerated the pace to sell products and services online.

Car brands such as SAIC Motor, BMW and NIO are among those who have introduced models and accessories online.

An industry insider said there were advantages and disadvantages in selling cars via livestreams.

On one hand, they allow consumers to have a deeper understanding of the cars.

On the other hand, the impact might be limited as many people may be watching but few really purchase vehicles. Customers still needed to go offline to complete transactions and car purchase involves a series of licensing, inspection, insurance and other after-sales procedures. Once consumers encounter problems, it will be difficult to solve them online.

Eileen Ren, vice president of digital customer experience at J.D. Power China, told the Global Times that "rather than sitting and waiting, automakers are trying to communicate more with potential car buyers via livestreaming. The biggest advantage is to shorten the distance with customers and accumulate some potential customer leads.”

Ye Shengji, deputy secretary general of the China Association of Automobile Manufacturers, said: "Live broadcasts will promote the digital transformation of automobile circulation. It will also accelerate the pace of innovation and further improvement in the field of marketing and service for automakers and car dealers."