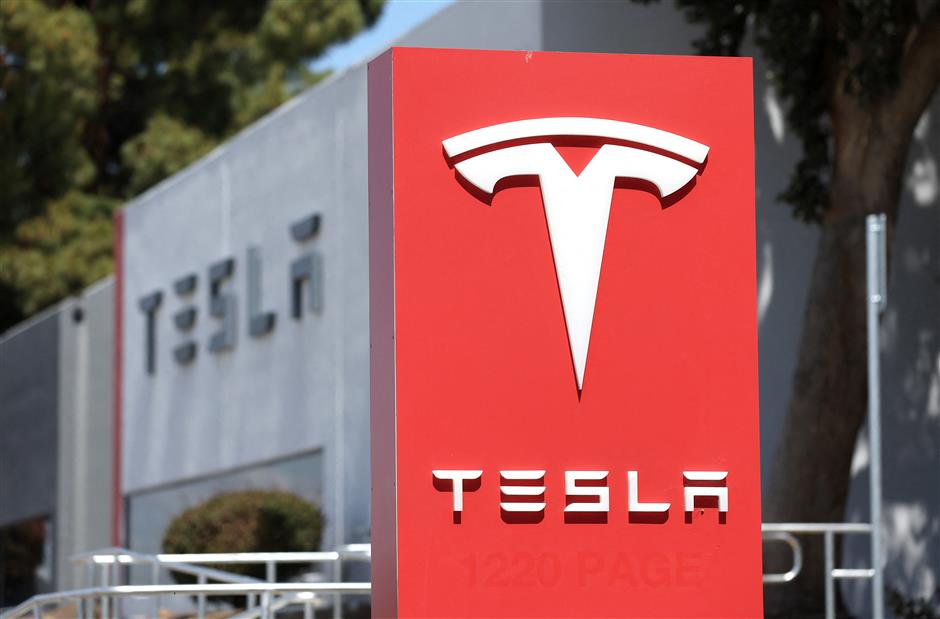 A sign is posted in front of a Tesla service center on April 20, 2022, in Fremont, California.

Tesla reported another banner quarter of profit growth on Wednesday on pricier vehicles and said its 2022 output plan was on track despite ongoing supply chain problems and a hit from recent COVID-19 lockdown measures in China.

Elon Musk's high-flying electric vehicle company notched a new record in quarterly profits of US$3.3 billion following the unveiling of new factories in Germany and the US state of Texas that have begun commercial deliveries.

Headwinds facing the company include increasing raw material costs, as well as a weeks-long outage at the Shanghai plant following the COVID-19 restrictions.

"Our own factories have been running below capacity for several quarters as supply chain became the main limiting factor, which is likely to continue through the rest of 2022," Tesla said in its earnings press release.

Still Musk said it "seems likely" the company will produce more than 1.5 million vehicles in 2022, which would be above the company's long-term target of at least 50 percent output growth.

"We are growing very rapidly year over year and remain confident of exceeding 50 percent growth for foreseeable future," Musk said on a conference call with investors and analysts. "The future is very exciting."

But the Model 3 Tesla currently lists for a starting price of US$42,690, putting it beyond reach for many households.

Musk, who has long spoken of the need to make electric vehicles affordable for the masses to combat climate change, insisted "we absolutely want to make EVs as affordable as possible."

"It's been very difficult when inflation is at a 40-or 50-year high" said Musk, who noted how suppliers have sought 20 to 30 percent price increases for parts.

For the latest quarter, Tesla reported profits of US$3.3 billion, up 658 percent from the year-ago period on an 81 percent jump in revenues to US$18.8 billion.

The company produced 305,407 autos in the period, slightly below the level in the prior quarter, but enough to push output above 1 million over the last 12 months.

Chief Financial Officer Zach Kirkhorn said Tesla's Shanghai plant "lost about a month of built volume" due to the lockdown, but that manufacturing "is resuming at limited levels working to get back to full production as quickly as possible."

Kirkhorn said cost inflation on raw materials had accelerated during the first quarter, and second-quarter costs are trending "slightly higher" than that.

As supply chain problems have persisted, auto analysts have cautioned that the EV build-out could be constrained by limited raw materials.

ISeeCars analyst Karl Brauer cited rising costs for lithium, palladium and nickel as a challenge for Tesla and the auto industry more generally.

Musk acknowledged some of these challenges for EVs, calling for entrepreneurs to focus on building lithium supply.