Hong Kong will lead a US$5 billion rescue of Cathay Pacific Airways, which like other airlines has been hit by a global travel slump triggered by the coronavirus pandemic.

The government’s involvement in the recapitalization follows the double blows of Hong Kong’s social unrest and the coronavirus outbreak, which Cathay said meant it was burning through about HK$3 billion (US$387 million) a month in cash.

Around the world, states have been bailing out airlines and in some cases, such as Germany’s Lufthansa, taking direct equity stakes to keep them flying.

“The alternative would have been a collapse of the company. Commercial debt markets are effectively closed to airlines today who do not have extensive government shareholder support,” Cathay Chairman Patrick Healy told reporters yesterday.

Cathay has grounded most of its planes, flying only cargo and a skeleton passenger network to major destinations such as Beijing, Los Angeles, Sydney and Tokyo.

Like Singapore Airlines, which received an up to US$10.1 billion rescue package led by state investor Temasek, Cathay has no domestic market to cushion the international loss.

Under the rescue plan, the Hong Kong government will be issued HK$19.5 billion (US$2.52 billion) of dividend-paying preference shares and HK$1.95 billion of warrants, giving it a 6 percent stake.

It would also provide a HK$7.8 billion bridging loan and would have the right to two non-voting observers at board meetings. Chan said they would be seasoned business professionals.

The deal includes a HK$11.7-billion rights issue to existing shareholders, led by Swire Pacific Ltd and Air China Ltd, which had halted trading yesterday morning alongside Cathay, pending the announcement.

Swire, which holds 45 percent, Air China which owns 30 percent and Qatar Airways with 10 percent plan to participate in the rights issue, Cathay said. Their holdings will fall to 42 percent, 28 percent and 9.4 percent, respectively, due to the government stake.

Cathay said that a fall in passenger revenue to only 1 percent of the previous year’s levels meant it had been losing cash at a rate of HK$2.5 billion to HK$3 billion per month since February. 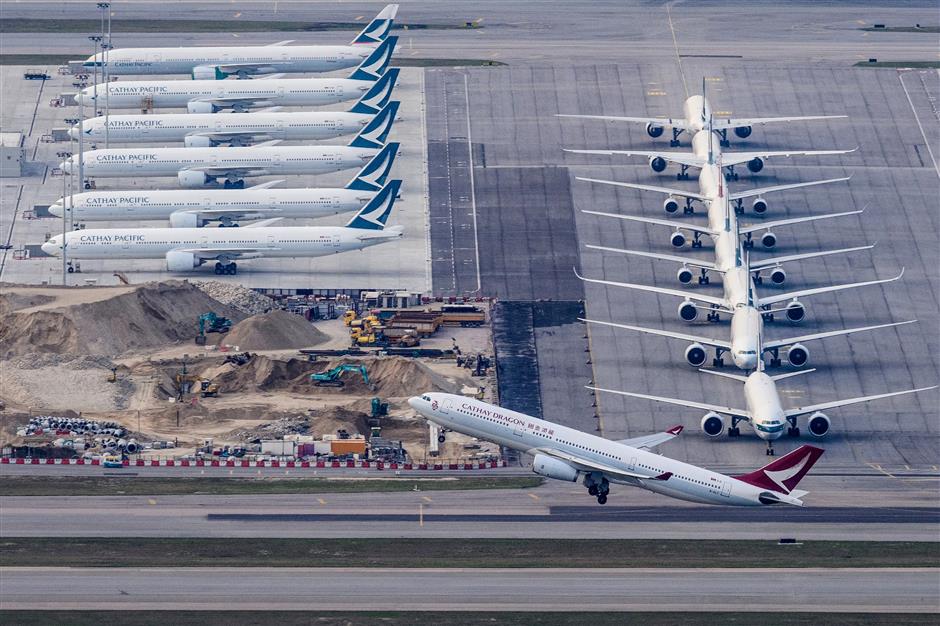 A Cathay Dragon flight takes off as Cathay Pacific planes are seen parked on the tarmac at Hong Kong’s Chek Lap Kok airport. Hong Kong will lead a US$5 billion Cathay Pacific rescue.