Zhoushan, an island city of 1.2 million people off the northeastern coast of Zhejiang Province, plans to become a world center for bunkering and other marine services.

Bunkering is the supply of fuel for ships, including loading and storage. The term originated in the days of steamships when coal was stored in bunkers.

A 300,000-ton crude oil terminal on Aoshan Island belongs to Sinochem Xingzhong, one of the largest and oldest oil storage and transportation companies in Zhoushan. 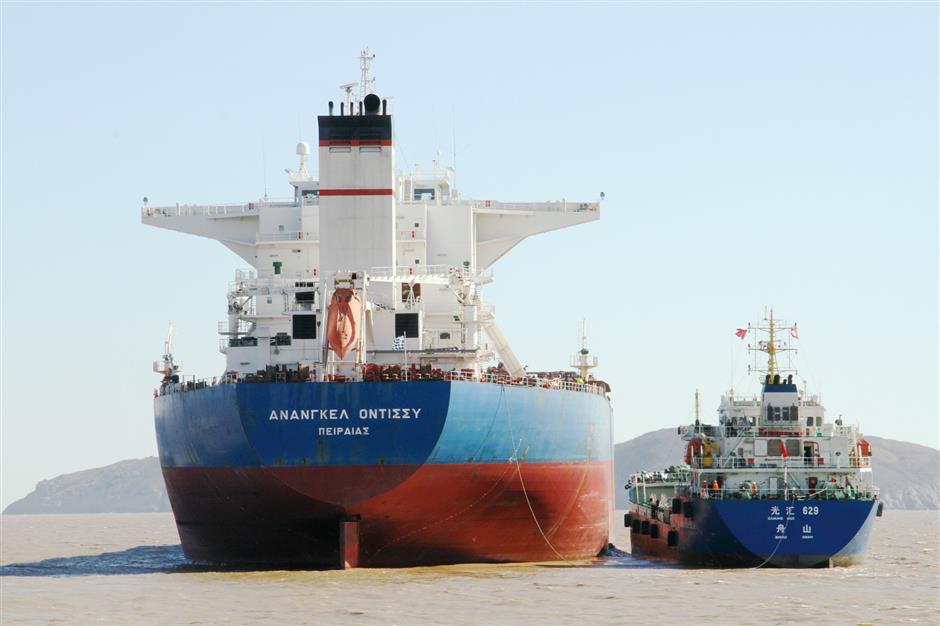 Bunkering at the sea 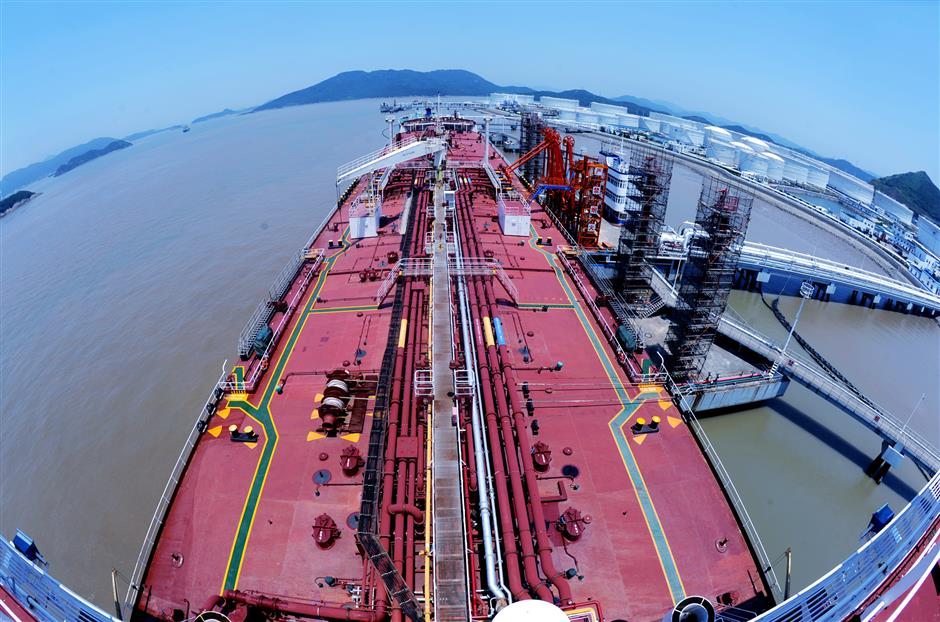 Parallel white and green pipelines deliver oil and water straight from the shore, while a 20-meter loading arm endlessly transfers oil onto bunker barges. These barges go to an anchorage where foreign vessels are supplied with fuel.

In 2018, Zhoushan supplied 3.6 million tons of bonded marine fuel, making it largest bunkering port in China, and one of the top 10 globally. In comparison, Singapore, the number one, provided 50 million tons in the same year. Zhoushan plans to supply 7 million tons in 2020, with a long-term aim of 20 million tons each year.

“We’re saying that we benchmark ourselves against Singapore, but it’s not easy,” said Xia Wenzhong, deputy head of the management committee of the China (Zhejiang) Pilot Free Trade Zone. “We’ve a lot of policy incentives and favorable measures, but there is still a long way to go. ”

In 2017, Zhejiang FTZ was established in Zhoushan and several outlying islands to accelerate reform of the oil and gas industry, and efficiency has since greatly improved. It covers an area of 119.95 square kilometers. Through a paperless single-window declaration system, the time required for customs clearance has been reduced from 16 hours to two hours, and a single bunker barge is now able to refuel multiple ships simultaneously, a procedure not allowed under previous regulations. 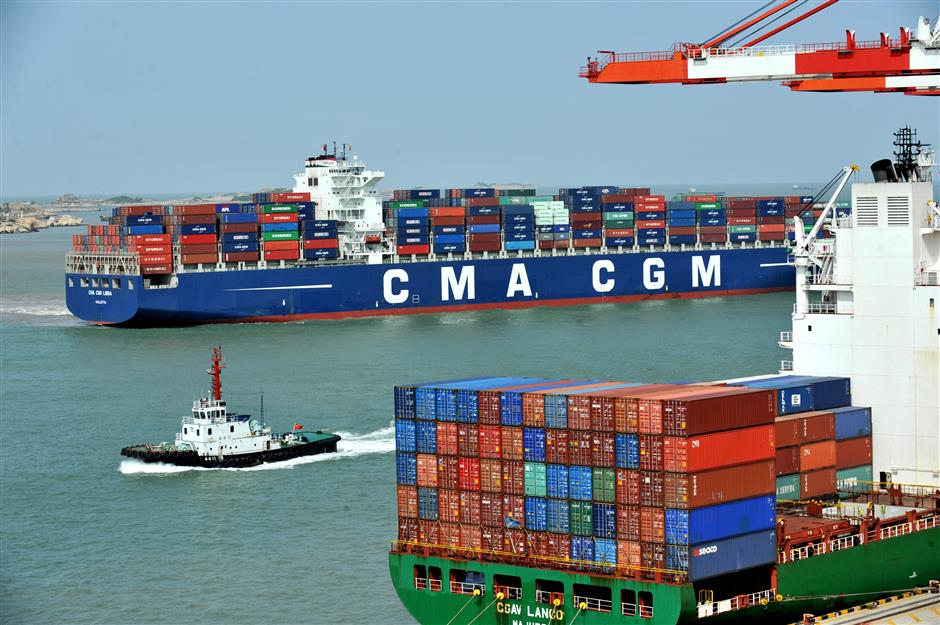 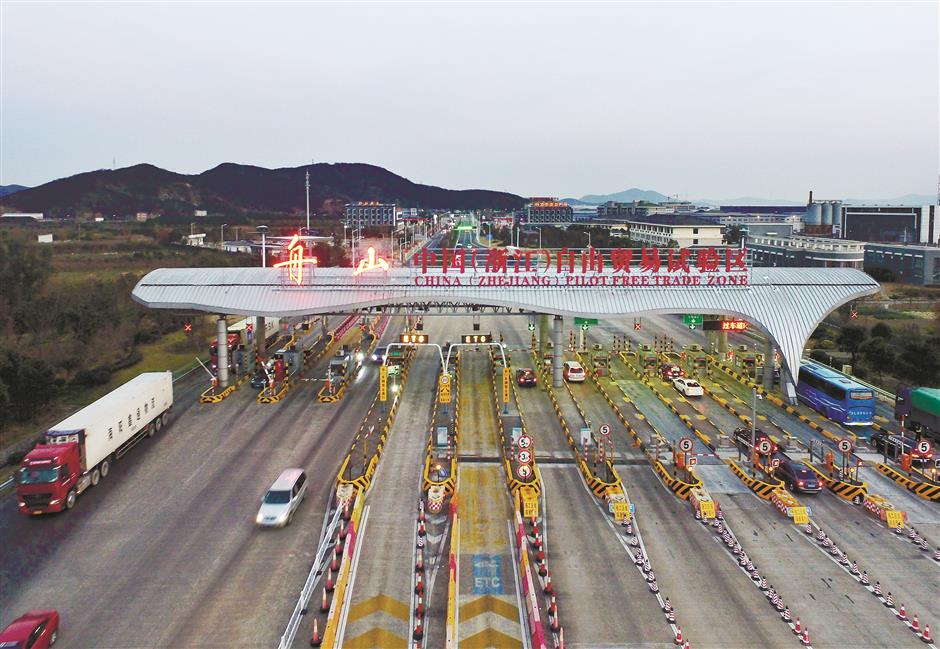 At present, bunker fuel in Zhoushan is about US$6-8 per ton more expensive than in Singapore, partly because of extra transportation costs.

The introduction of low-sulphur marine fuel regulations by the International Maritime Organization may be an opportunity for Zhoushan.

“The IMO requires that by 2020 sulphur content in marine fuel should be cut to 0.5 percent instead of the 3.5 percent standard we have now,” said Ying Zhongmin, head of policy and regulation department at the Zhejiang FTZ. “I think that puts us and Singapore on the same footing. ”

China should have a larger capacity for producing bunker fuel and other oil refinery products. Domestic refineries processed 600 million tons of crude oil in 2018, but production capacity exceeds 800 million tons.

“We do not produce any bunker fuel for export,” added Xia.

Refineries do not have any incentive to produce bunker fuel, mainly because of a lack of export tax rebates, leaving prices uncompetitive in the global market.

“Bunker fuel is simply not included in our export tax rebate directory,” said Ying. “But IMO 2020 is beneficial to the environment, and deals with overcapacity in our refineries. ”

Another way to cut the price is by blending imported oils. In August 2018, Sinochem Xingzhong began blending two kinds of bonded oils imported from Malaysia, making 45,000 tons of bunker fuel. In February this year, another 7,000 tons of blending was done at the Zhejiang FTZ using domestic oil. By blending, the bunker fuel price in Zhoushan may fall by US$6.5 per ton.

A total of 12 bunkering companies have set up business in Zhoushan, including the state-owned Sinopec Group and Consort Bunkers Pte Ltd, the first foreign bunkering supplier in the Chinese mainland.

The Singapore company supplies around 3 million tons yearly through large bunkering ports including Singapore, Fujairah in the United Arab Emirates and Jebel Ali in Dubai. 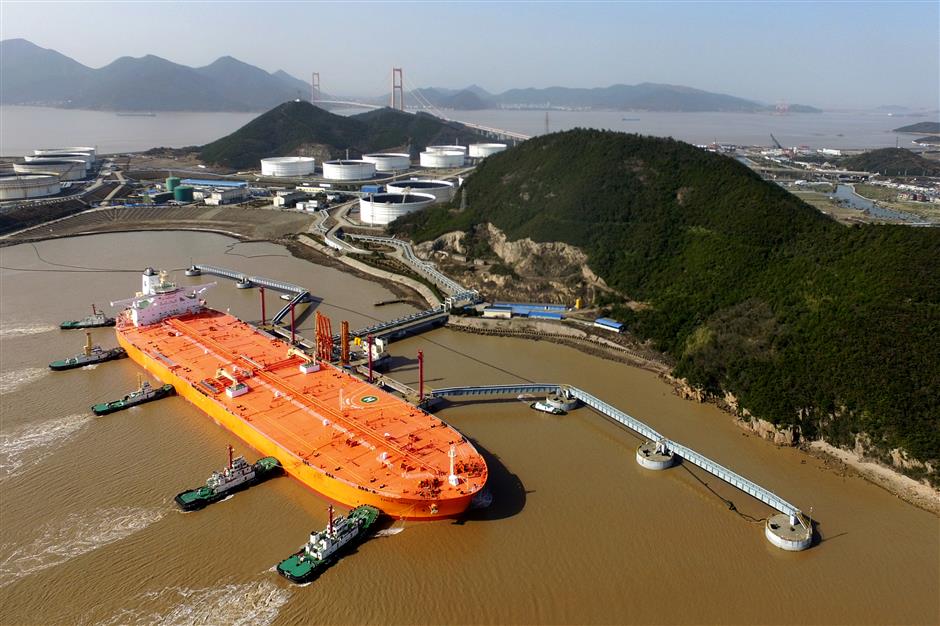 Bai Yongchao, general manager of the Consort Bunkers (Zhoushan), said that since starting business last December, they had supplied more than 20,000 tons and expect to supply 500,000 tons within three years.

“Zhoushan is our next growth point. IMO 2020 will probably affect supplies in Singapore, ” said Bai.

Singapore has 51 bunkering companies. Marine services account for 7 to 8 percent of the country’s GDP. The large vessel flow and cargo throughput have been instrumental to the growth of local financial services.

“In the end, it is a competition between countries, and between ports,” said Cheng Quanxiang, deputy general manager of Sinopec’s global bunkering business center in Zhoushan.

Crude oil trading in China is still a very restricted market. The import of crude is based on a quota system, and imports and trade are monopolized by state-owned conglomerates CNOOC, PetroChina, Sinochem and Sinopec.

In March, the petroleum subsidiary of Wuchan Zhongda Group became the first private company in Zhejiang to get a license to import and trade crude.

“The FTZ can license two or three companies to import and trade crude,” said Huang Bo, an FTZ official. “That is a great breakthrough as previously there weren’t any rules or procedures at the provincial level.”