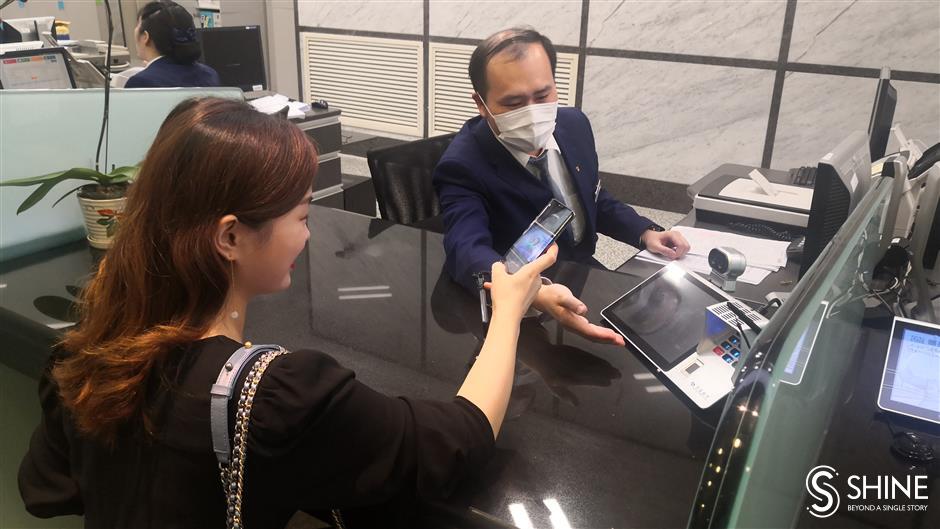 A company representative opens a business account by cellphone at an outlet of the Bank of Communications on Tuesday.

Companies in the city can now open bank accounts with their electronic operating licenses and seals at 131 outlets of the Bank of Communications in Shanghai, the city's market watchdog announced.

Authorities began synchronous free issuance of e-versions of licenses and seals in April due to the coronavirus pandemic, enabling companies to sign contracts and conduct business operations online and apply for affairs such as publishing annual reports, handling tax affairs and employees' social insurance online with e-licenses and seals.

Legal representatives of 140,300 companies in the city have downloaded e-versions of business licenses by cellphones since April and 110,800 businesses have used e-licenses to apply for various government services, the administration said on Tuesday.

Previously, companies were allowed to apply for electronic seals only after they received physical licenses and seals, which are mandatory in order to operate a business.

Applicants were also required to present original paper licenses, as well as copies, before they could get an e-version of their seal.

The Bank of Communications is the first bank in the country to apply e-version business license and seals in the opening of business bank accounts.

"The new practice replaces the paperwork of about 10 services such as the collection of business license information in paper versions, exempting the prints of five materials such as the application letter and authorization letter when companies apply to open a bank account," said Shi Yi, an official with the registration department of the administration.