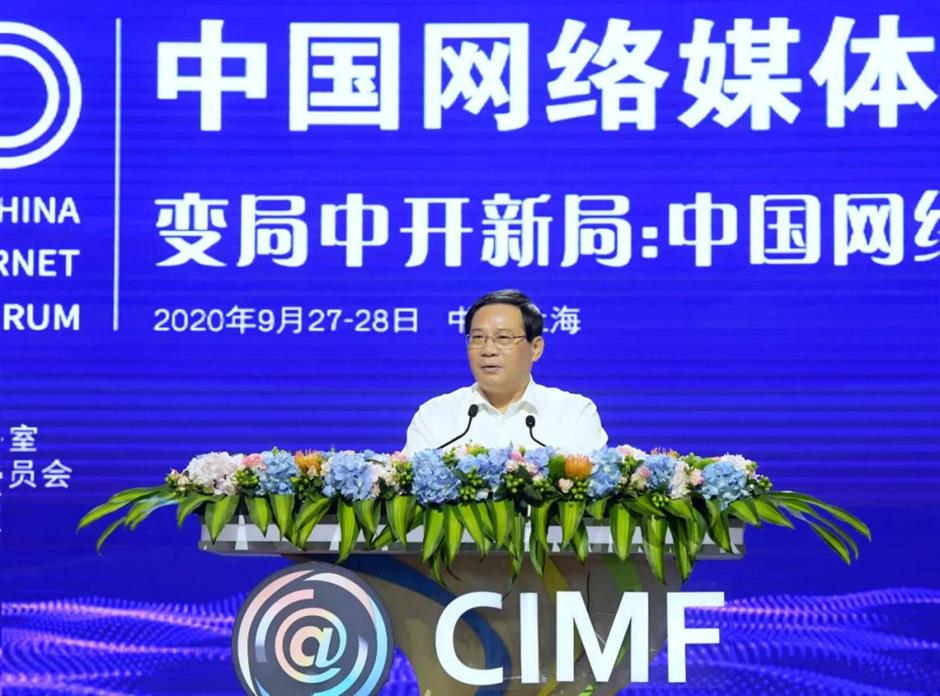 Government bodies, major media outlets and digital platforms have pledged to forge closer ties, actively embrace new changes in the market, and gain a stronghold of information communication in a complex media environment.

Online media have demonstrated their ability and actively voiced messages in stabilizing social status in bringing together people's hearts during the fight against the coronavirus pandemic, he told the opening ceremony of the China Internet Media Forum on Sunday.

"They should continue to give full play to their advantages in information, talent, technology, platforms and other resources to drive further media convergence," Li added.

Director of the Cyberspace Administration of China, Zhuang Rongwen, urged online media publishers to shoulder responsibility, explore new means and to tell better stories that are suitable for online distribution.

Media outlets shall not blindly pursue every technology upgrade but shall focus on those that are most suitable for the specific needs of news publishing and content production.

At the next stage, media outlets shall better use technology to produce more content, for example those with standard formats like listed companies' financial earnings releases.

He also reiterated that media outlets shall remain cautious about early stage technology development, and shall seek convergence based on the special features of news and media content publishing.

It should also focus on the actual benefits, instead of just playing with concepts and buzzwords.

There's still huge growth potential for a wide range of areas where AI converges with news media coverage, he noted.

"As algorithms are having an increasingly bigger influence toward online information distribution, tech companies and digital platforms should bear a greater responsibility to actively learn consumers' higher demands instead of simply pursing their basic instincts for the sake of more clicks," he said.

Traditional and digital media publishers have been at the forefront of the industry shift brought by AI and new technologies, and the combination of new media and AI will be a big trend amid the integration of different types of media formats, he noted.

Online media has also played a crucial role in offering  information during the coronavirus crisis and the latest information about health-care protocols.

Major online portals and social platforms like Tencent, Baidu and Sina have set up special pages to offer real-time updates on the fight against the pandemic.

Sun Yusheng, a member of the editorial committee at the China Media Group, the parent group of China Central Television Station, China National Radio and China Radio International, noted that new media coverage and on-site live-streaming coverage have been providing important news material for TV stations and overseas media amid the pandemic outbreak.

The general offices of the Communist Party of China Central Committee and the State Council on Saturday released a guideline to further beef up the country's media convergence, calling for the integration of new media and traditional media formats in terms of mechanism, policy actions, management procedures and talent.

It also stresses the need to better use 5G, big data and artificial intelligence, among others.

New digital tools like blockchain have been used to bring together individual charitable donations for larger philanthropic deeds.

Liu Changle, chairman and Executive President of Phoenix TV, also said that media still holds a crucial role to link common human feelings and also as an alarm for potential risks in times of uncertainty.