A retired woman who has been trading Shanghai shares for almost three decades won the right to buy 500 shares in China Railway Signal & Communication through a recent online subscription. She paid 5.85 yuan (86 US cents) a share.

The company is one of the 25 making their debut today on the new STAR Market in Shanghai.

The lucky grandmother, surnamed Zeng, said she expects she could earn about 10,000 yuan if she sells the shares after trading begins. The price-to-earnings ratio of Railway Signal shares is 18, compared with an average of 53 for all 25 new shares.

The shares could trade a lot higher than Zeng expected because the STAR Market has no daily price limits during the first five days of trading.

That is in contrast to the mainstream Shanghai trading board, where price gains are capped at 44 percent on debut days and trading swings are limited to 10 percent a day for the duration of trading.

“I don’t know,” Zeng said of the decision awaiting her. “I need time to observe the new market further before I decide when to sell.”

Zeng is among millions of Chinese stock investors, including both retail and institutional, who face a new market environment with the advent of STAR. They could face frenzied demand and some eye-popping valuations until the market settles down.

The STAR Market is China’s newest board geared to technology companies and startups, ranging from chipmakers to biotech firms. It is aimed at giving companies involved in cutting-edge science and technology greater access to funding.

The Nasdaq-style board is a testing ground for several securities market reforms, including a registration-based initial public offering system never tried before in China. In the past, new share offers were shaped by regulatory authorities, not market forces.

STAR is seen as a major step in China’s campaign to reform its capital markets and promote innovation in science and technology. It was first proposed by President Xi Jinping last November, only eight months before the official start of trading.

To participate in the new market, individual investors must have 500,000 yuan worth of financial assets in their A-share trading accounts, as well as two years’ trading experience.

Foreign investors will be able to buy into STAR stocks through China’s various Qualified Foreign Institutional Investor programs, instead of the Shanghai-Hong Kong Stock Connect and Shenzhen-Hong Kong Connect — market links allowing foreigners to invest in A-shares on the mainstream Shanghai and Shenzhen boards.

In place of the daily 10 percent allowable swings in share prices on those two bourses, STAR shares will have a 20 percent limit.

And shares will be temporarily halted after swings of 30 percent in a single trading day — a sort of “cool down” warning to investors.

Sponsors of an IPO on the new board, which are usually investment banks or brokerage firms, are required to buy 2-5 percent of the new shares they handle. It’s a rule designed to prevent them from overpricing deals.

Zeng, who started trading in 1992, is a veteran retail investor in China. But she is cautious. She said she won’t buy any STAR shares in the initial days of trading. Instead, she said she plans to “wait and see,” until she can understand how rules of the market affect trading.

Market players have hailed the onset of STAR.

“We believe it will be an instrumental fundraising channel for high-tech companies and will drive more innovation in China, while at the same time, open up further participation to international institutions and investors,” said Toshiyasu Iiyama, head of the China Committee at Nomura Holdings.

STAR listings focus on companies in technology and emerging sectors, such as next-generation information technology, advanced equipment and materials, green energy and biomedicine, according to the China Securities Regulatory Commission.

STAR is not China’s first Nasdaq-style board. Ten years ago, the ChiNext board began trading on the Shenzhen exchange. It, too, was aimed at high-growth technology startups in need of capital.

Speculative money poured into ChiNext shares, and the resulting volatility ended in a market nosedive in 2015. It has since recovered and stabilized, but remains an underperformer among Chinese stock indexes.

Investors will be closely watching to see how STAR’s different structure will work.

To date, the Shanghai Stock Exchange had accepted listing applications from 148 companies. The first 25 companies to list raised about 37 billion yuan through their initial public offerings.

Despite high valuations, the IPOs were heavily oversubscribed among retail investors.

The average price-to-earnings (PE) ratio of the 25 firms was 53 times their 2018 earnings. By comparison, the PE ratios of previous IPOs on mainstream Chinese boards were no greater than 23. 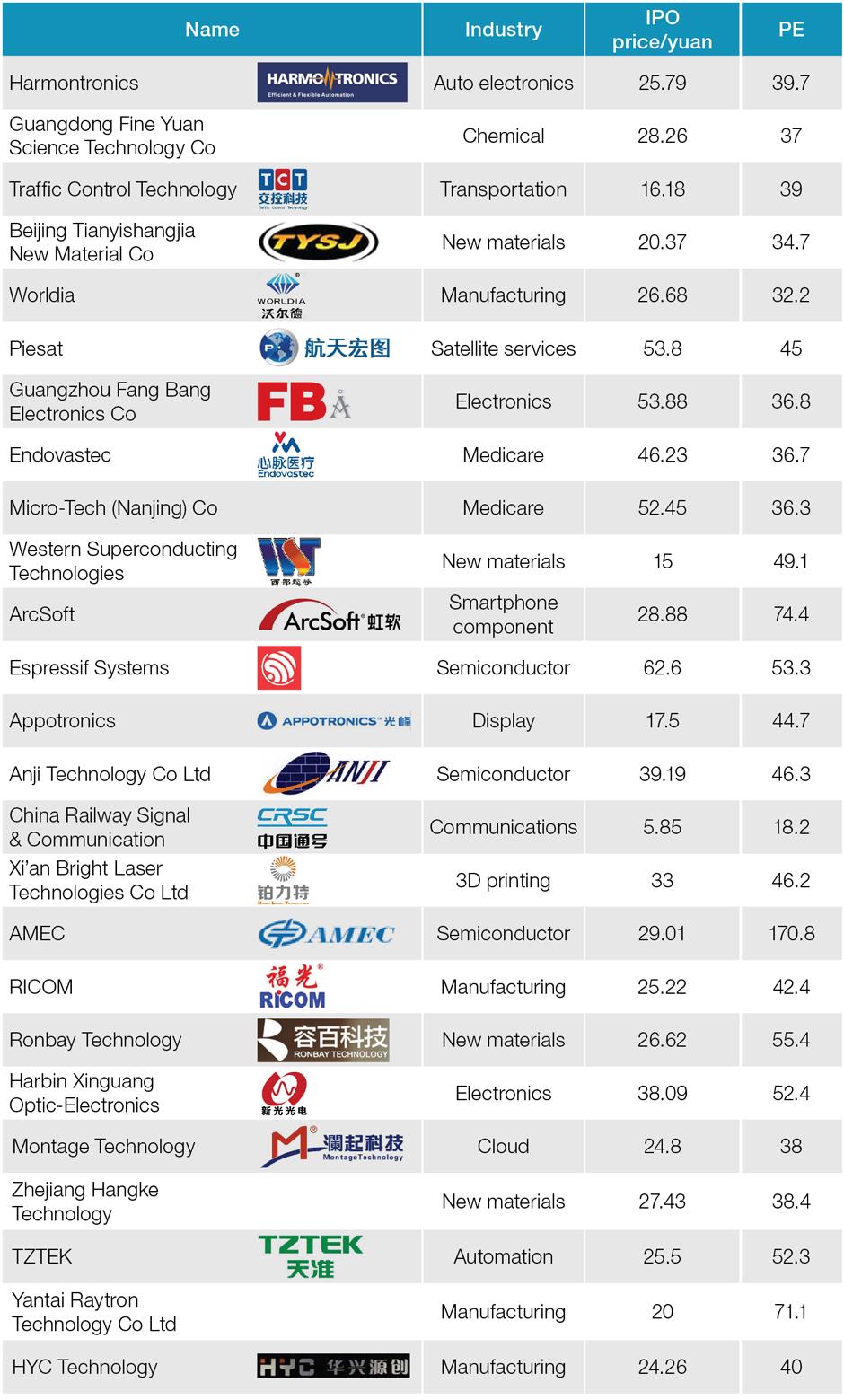