Income from delivery services on increase 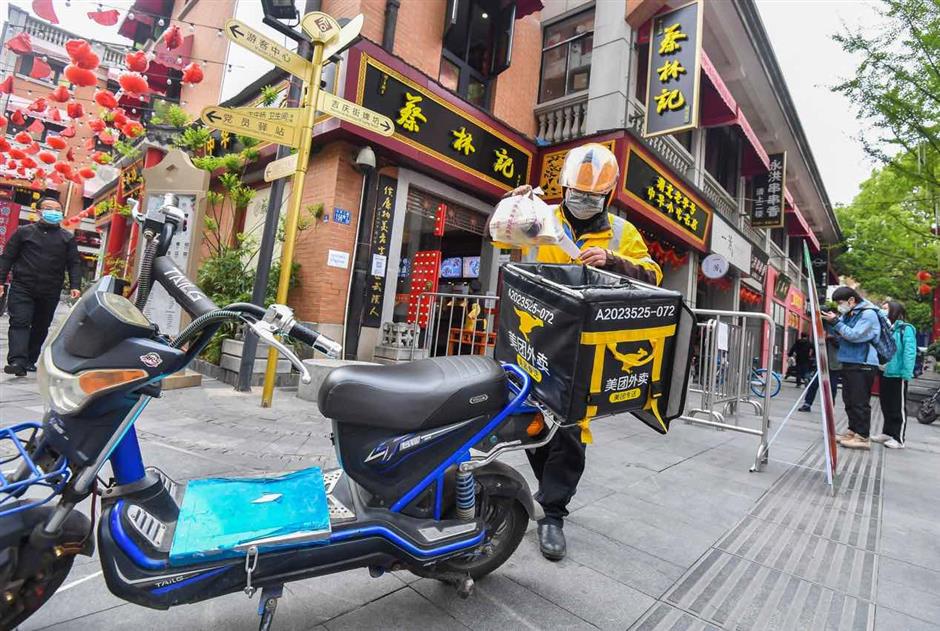 Demand for food deliveries boomed during the lockdown period.

The income from deliveries is estimated to account for 20 percent of the total catering market in the near future, according to a report by Meituan and the China Hospitality Association.

In 2019, the food delivery market made up about 14 percent of total food catering business, which stood at 4.67 trillion yuan, according to the National Bureau of Statistics.

Light food and bento boxes are the most popular choice for takeaway, making up 23 percent of total orders, while orders for fruit juices and milk tea saw an annual increase of 83 percent of Meituan, the report found.

It estimated the total of takeaway delivery service users to be around 460 million in China. Eateries in cities like Shanghai, Nanjing and Hangzhou reported around a 20 percent increase of delivery income in the previous two weeks after a promotion organized by the association along with delivery platforms.

The 10-day promotional activity covered some 4,000 eateries in five cities and is expected to have brought 2 billion yuan in sales.

According to a survey of more than 13,000 merchants in February this year, 86.8 percent said they managed to increase their income through delivery services offered by third-party platforms, with around a third adding income by less than 20 percent.

Nearly 40 percent of eateries have one or two dedicated delivery staff but over 52 percent said they have not employed additional staff to handle deliveries.

Meituan added some 1 million new staff in the four months to May 24 as demand for delivery boomed during lockdown periods.

More than 82 percent of consumers in the survey said delivery services had expanded their dining choices.

A separate survey of Meituan food merchants in April suggests 55 percent would see integrated development of online and offline businesses.

Shanghai shoppers' nighttime spending in June has returned to the same level compared with a year ago and also recorded a 10 percent increase from May, according to a separate report by Alibaba's local services unit and the Shanghai Chain Enterprise Association.

Shanghai consumers are favoring coffee and light snacks, while local steamed bums are the most popular items for takeaway orders on Alibaba's Ele.me food delivery site.