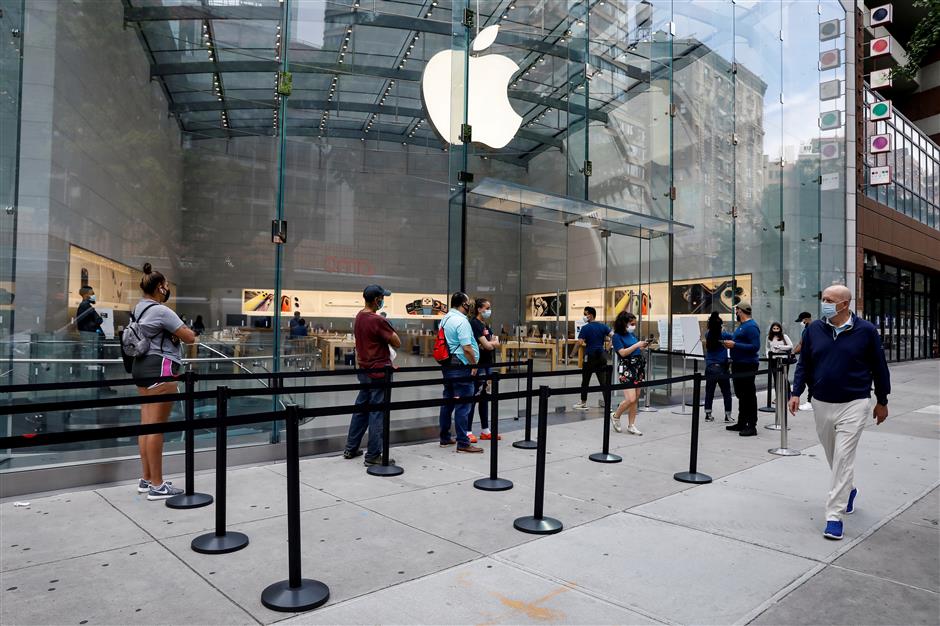 Customers keep their distance before entering an Apple Store during phase one of reopening after the COVID-19 lockdown in New York.

Apple Inc is expanding a new physical store format as it tries to get iPhone 12 models into customers’ hands, its retail chief said.

The new “Express” stores come as COVID-19 rates are rising around the United States and Europe. The new format has a wall in front of the main store with sales counters protected by plexiglass and a few shelves of accessories such as phone cases and AirPods. Customers make an appointment to pick up orders placed online or interact with Apple’s technicians for customer service.

For Apple, which has 271 retail stores in the United States, the new format could help it navigate a holiday sales challenge.

The company is launching its biggest-selling product of the year as the pandemic flares up again in key markets such as the United States and Europe. Apple has taken a cautious approach to re-opening its retail stores, using a team that includes medical experts to make its own calls on a county-by-county basis and sometimes shuttering stores again when local rules would otherwise allow them to operate.

The new “Express” stores give Apple another option in areas where troubling COVID-19 rates might force it to consider reducing service to curbside pickup.

That option does not work as smoothly for Apple stores in shopping malls or busy downtown shopping districts where the “curb” may be far away from the storefront, said Deirdre O’Brien, senior vice president of retail and people at Apple.

Apple has about 20 such stores in the US and Europe and plans to expand to 50 by the end of the month.

“It’s a swifter way for us to serve customers,” O’Brien said. “It allows us to maintain all the appropriate social distancing and maintain all of our health protocols within our stores.”

Carolina Milanesi, an analyst with Creative Strategies, said customers who buy iPhones today are unlikely to be put off by not being able to handle demo devices at the “Express” stores.

“People who are buying this early in the cycle, they know what they are buying,” she said.

Gene Munster, a longtime Apple analyst who is now a partner at Loup Ventures, said Apple will likely face about 5 percent fewer iPhone sales because of the current retail environment.

But that loss has been offset by Apple’s customer service, which Munster said helped drive higher revenues in Apple’s most recent quarter.

“When you’re a parent trying to do school from home or an employer trying to do distributed technology, that’s a positive force,” he said.