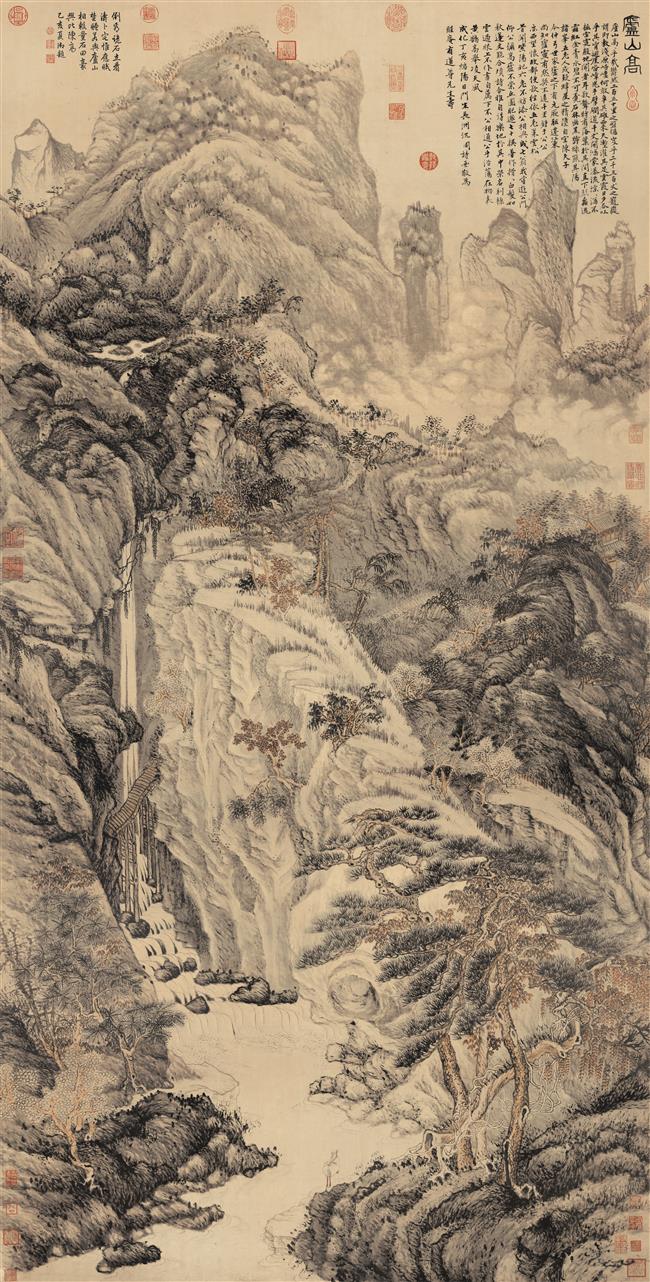 Shen Zhou painted “Lofty Mount Lu,” to mark the 70th birthday of his teacher, Chen Kuan. Mount Lu, towering about 1,500 meters above sea level and known as one of the most popular scenic mountains in the country, is located in Jiangxi province, where Chen hailed from. The painting is seen as a representation of Shen’s respect for his teacher.

Many art critics agree that the Ming Dynasty (1368-1644) was a golden age of landscape paintings in China.

Always a popular genres in traditional Chinese painting, landscape became more diverse in terms of style, brush work and aesthetics during this time than ever before.

After the Mongolian-governed Yuan Dynasty (1271-1368) was toppled and the ethnic Han majority began to rule again, imperial court artists strove to revive the descriptive style of the painting academy of the Southern Song Dynasty (1127-1279), also a Han regime. Eventually, they formed the so-called Zhe School.

Meanwhile, another group of painters formed the Wu School, based in today’s Suzhou in east China’s Jiangsu Province, to practice the more expressive and calligraphic style of the Yuan Dynasty literati painters. Painters of this school used painting as a vehicle to express their personalities and feelings about different subjects or events.

Shen was born into a wealthy family in Suzhou. Both his father and uncle were renowned poets, essayists, calligraphers and painters. Thanks to a fortune he inherited, Shen never needed to sit the imperial civil examinations. He also never tried to earn a living by selling his art like many other scholars and painters of his time. Instead, he devoted his life to reading, writing and painting.

The scholarly upbringing and artistic training Shen received in his early years helped establish him as the quintessential literati painter of the Ming Dynasty.

After refining the techniques he learned from those masters of earlier dynasties, Shen created his own simplified brush style featuring bold lines and monumental compositions.

Art critics have also noted that Shen tended to paint small scenes before 40, but then switched to large works.

In the painting, Shen employed Wang Meng’s brush work to depict rocks and trees and used traditional hemp-fiber texture strokes to create the mountains and slopes. In order to achieve a three-dimensional effect, the artist shaded the surfaces of slopes with light ink and later added layers of darker ink.

Here, Shen also displayed his calligraphic training in the rendering of a high waterfall with fine, smooth and vigorous lines.

Landscape paintings in China are often used to express the mind and emotions of the artist rather than simply portray the external world. For this reason, such paintings are usually filled with symbolism. “Lofty Mount Lu” is no exception.

Shen painted “Lofty Mount Lu” to mark the 70th birthday of his teacher, Chen Kuan, who hailed from east China’s Jiangxi Province. Mount Lu, towering about 1,500 meters above sea level and known as one of the most popular scenic mountains in the country, is located in that same province along the Yangtze River, the longest river in China. 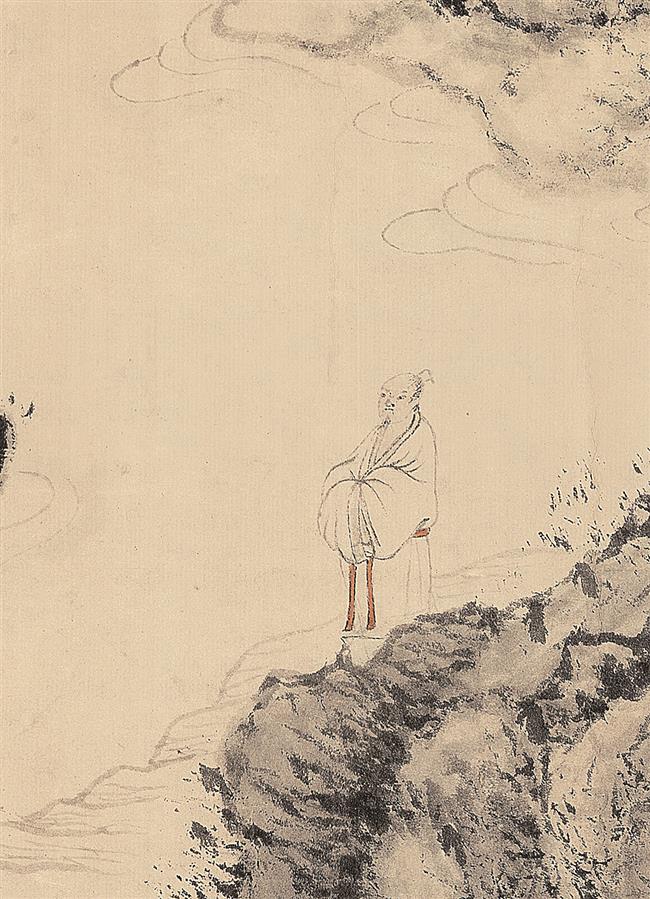 A tiny, lone figure at the bottom of the painting looks up toward the peaks of the mountain. Critics believe this figure represents the artist himself.

Looking carefully, one will find a lone figure at the bottom of the painting, looking upward at the peaks of the mountain. Many critics believe this figure represents the artist himself.

This scene will remind many of a famous and frequently-quoted Chinese saying: “gaoshan yangzhi,” or literally, “beholding a high mountain with awe.” This phrase is actually a metaphor for admiring a man of great virtue.

“Lofty Mount Lu” was perhaps not only a birthday gift, but also a representation of the artist’s reverence for his teacher.

Today, this masterpiece is housed in the National Palace Museum in Taipei.

Type: Ink and color on paper