On initial observations there seems to be no link between Harvard University and a luxury hotel in Shanghai. However, recently CAMLab (Chinese Art Media Lab of Harvard University) announced Nan Shufang, sited in Amanyangyun Resort, as its first project base.

Sited in Minhang District, the story of Amanyangyun actually began 700 kilometers away in rural Fuzhou in the northeastern part of Jiangxi Province. Fuzhou, an ancient town, has nurtured several talented artists and literati in its deep cultural heritage past.

Due to plans for a much-needed reservoir, approved in 2002 in Fuzhou, the fate of a cluster of “Old China” remnants were to be destroyed, including 10,000 camphor trees and many old dwellings in the neighborhood.

Ma Dadong, the owner of Amanyangyun, and also a native of Fuzhou, made a bold plan to relocate as many Ming Dynasty (1368-1644) and Qing Dynasty (1644-1911) villas as possible, plus a forest of camphor trees to the suburbs of Shanghai.

His primary task is to save the “essence of ancient Chinese cultures” until Aman (a luxury hotel group founded by Indonesian hotelier Adrian Zecha) joined the restoration project in 2009 with the emergence of Amanyangyun.

Meaning “nourishing cloud,” yangyun is a reference to expanding the “cloud” of your mind with knowledge — a philosophy borne by the story of the trees and dwellings at Amanyangyun’s heart.

The ethereal camphor forest sets the tone for a peaceful, introspective retreat, where old and new, natural and man-made, coexist in perfect harmony.

Amid a flourishing forest of camphor trees near a tranquil lake, 26 heritage villas have been carefully moved brick-by-brick from Fuzhou to become an integral part of Aman’s fourth destination in China. 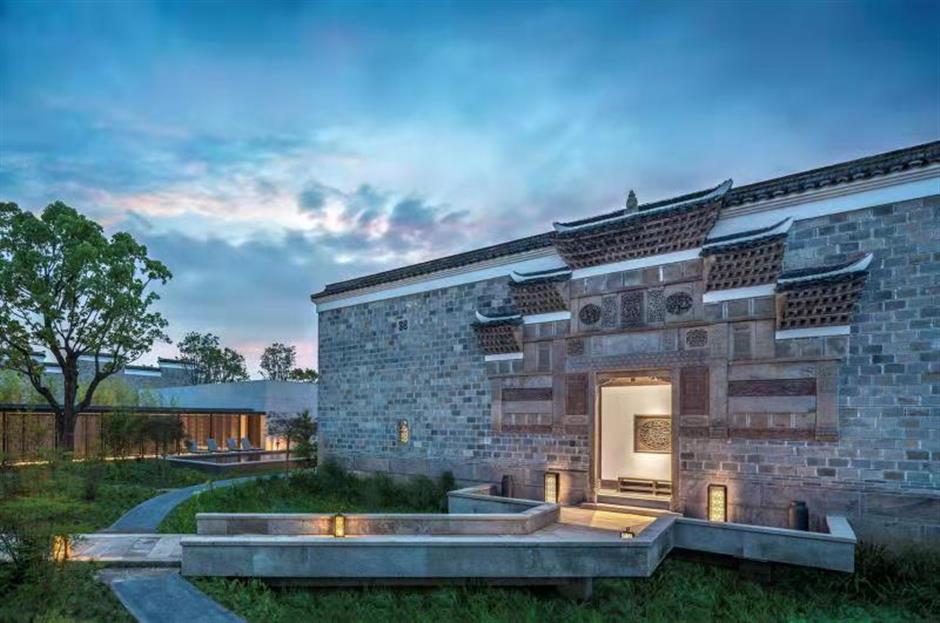 Nan Shufang, the spiritual heart of Amanyangyun, is named after the royal reading pavilion in the Forbidden City. 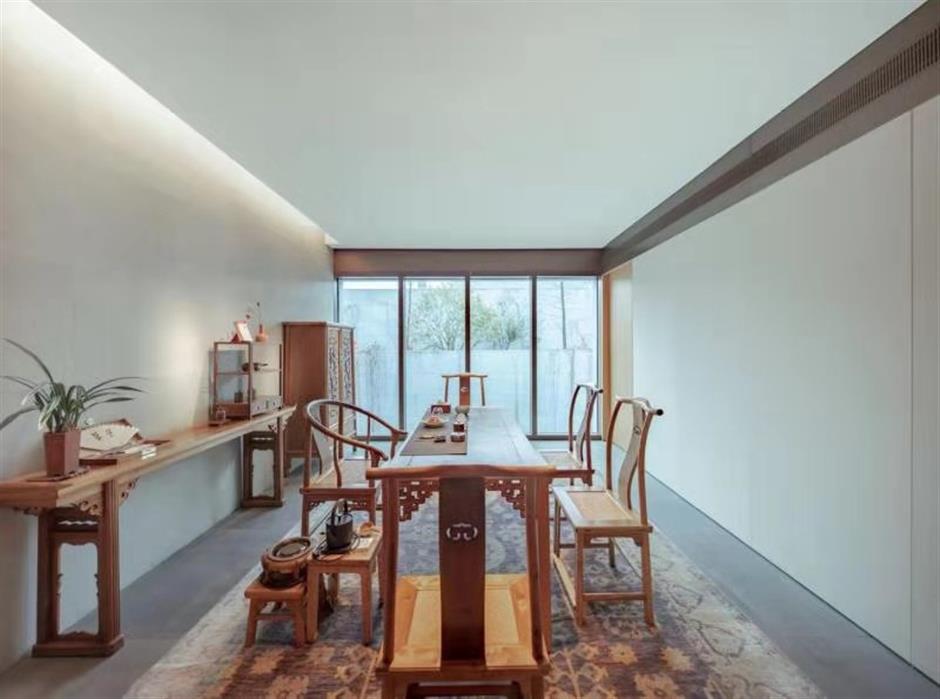 Nan Shufang, the spiritual heart of Amanyangyun, is named after the royal reading pavilion in the Forbidden City. The restored antique villa, which used to be a private school in 17th century in Fuzhou, is now a modern-day recreation of the scholars’ studio of ancient China’s literati.

Perhaps the charisma of Nan Shufang and its philosophy of letting people return to traditional Chinese scholar culture, by experiencing and spreading its heritage through study, unwittingly coincides with the philosophy and values of Harvard CAMLab.

Within the Faculty of Arts and Sciences at Harvard University, CAMLab is led by professor Eugene Wang, with an aim to allow the integration between advanced Chinese academic research and creative media art.

“Peony Pavilion” is one of the highlights on the project list of CAMLab. It is “an object play,” — rather than the familiar Kunqu Opera — which integrates architectural modeling, craftsmanship and video mapping, constituting a conglomeration of media across the spectrum of materiality.

“This project hopes to introduce the inter-transformation of reality and illusion, which is central to traditional Chinese theater, into the 21st century prospect of artificial intelligence and virtual reality,” Wang said.

One of the future project bases of CAMLab will be implemented in the forest park within two years, opposite the Amanyangyun Resort.

Current projects at CAMLab include the production of an epic art film, many immersive installation designs, research-based curatorial projects and digital publications.

Wang is the Abby Aldrich Rockefeller Professor of Asian Art. A Guggenheim Fellow in 2005, he is the art history editor of the Encyclopedia of Buddhism (2004), and the author of many publications ranging from early Chinese bronzes to contemporary art. 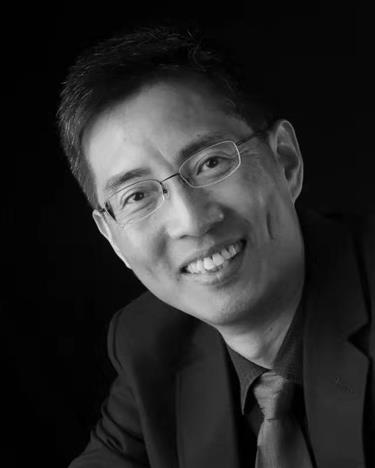 Q: What initiated you to establish the Harvard CAMLab?

A: We are stepping into an age when words cannot fully grasp the power of an image. In other words, only vision can emulate the power of vision and only “post-visionary” language — amplified by cutting-edge technology like AR, VR and more to come — can unveil the imaginative space even beyond vision. Thus, to uncover the visual scheme of a Chinese vision, we chose to found a Chinese art media lab, who — built upon the solid humanities and academic foundation of Harvard University — aims to utilize new media technology of the global present, to reconstruct an artistic narrative of the Chinese past, and drive the imagination of the human future.

Q: Why did you choose Nan Shufang as your partner in Shanghai?

A: Rather than CAMLab choosing Nan Shufang, or vice versa, it is more like our shared perspective chose us. The call to rediscover a Chinese tradition and reconfigure its imagination has brought CAMLab and Nan Shufang together. CAMLab as a “newly born baby” strives to find partners who resonate with our vision and share our ambition. Nan Shufang has joined our journey and we welcome more onboard.

Q: What functions do you vision to realize for CAMLab?

A: “CAMLab” speaks for us. One way to understand it is: “C” stands for “Consciousness,” “A” stands for “Aesthetics” and “M” stands for “Materiality.” There can be many ways to interpret the three letters yet they nonetheless all speak to what we care about at the moment. Aside from content-wise, CAMLab hopes to provide a collaborative space for young talent and cultivate a vibrant culture for creative minds.

Q: What’s the biggest challenge that CAMLab has encountered since its establishment?

A: We wouldn’t call it a challenge but an exciting point to discover and bring together young talent across the globe. Beneath the big names of an educational background and titles, we look for creative minds who are keen to innovate and have a bigger care for humanity.

Q: Different from other art projects based in China, what are the advantages for CAMLab?

A: We collate first-hand academic resources from leading institutes in this world, including but not limited to Harvard, MIT, Columbia, Tsinghua and more. CAMLab’s creative projects along with technology and media methods are deeply situated in an international perspective and consolidated by thorough academic research. Meanwhile, we keep an open mind for innovative ideas and technological currents in the art world and beyond.

Q: How does the visual version of “Peony Pavilion” differ from the traditional one?

A: It is usually the most simple that is most touching. Peony Pavilion tells many elemental aspects of the beauty of human nature: The love of a teenage girl, the search for a spiritual home, the convergence and inversion of a dream and reality, and much more. At CAMLab, we delve into the mental-searching process in this theatrical classic and map out its dreamy aspect onto art objects. Augmented by cutting-edge media and projection technology, it is the experiential aspect of what we call an “object play” that resonates with a universal audience and calls for an all-inclusive joining-in.

Q: When will the “Peony Pavilion” be presented to the public? In what kind of mode?

A: CAMLab is in constant discussion with Nan Shufang on an ideal and feasible deliver date for “Peony Pavilion” and we encourage the media and audiences to stay tuned.