As the nation walks on eggshells amid virus, an artisan carves them 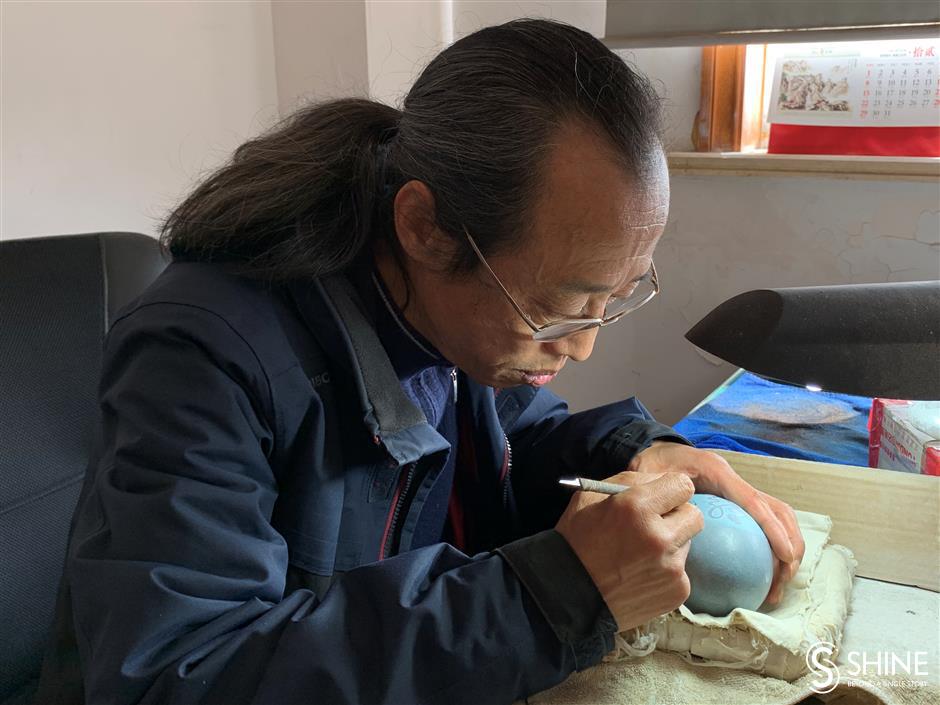 Yuan Jiazhao, 62, has dedicated himself to eggshell carving for 40 years, with exquisite results.

Yuan Jiazhao, 62, has paid tribute to the national fight against the coronavirus outbreak in a more unusual way than most. He used an egg and engraving tools.

Yuan belongs to the centuries-old tradition of artists who turn eggshells into delicately carved artworks. It has been called China’s “most fragile art.”

His egg dedicated to the epidemic features two hands, symbolizing the solidarity of the Chinese in a time of trouble; clouds signifying the spread of the epidemic; thunderbolts and fire epitomizing the forces that will eradicate the virus; and Shanghai’s Oriental Pearl TV Tower and Wuhan’s Yellow Crane Tower, exemplifying the comradeship of the two cities.

“I don’t have the opportunity to work at the front line of the epidemic, but I can use my skills to encourage people to keep up the fight,” said Yuan.

Yuan’s latest work pays tribute to the spirit of solidarity the Chinese have mustered amid the epidemic.

The skill of eggshell carving traces back to the Spring and Autumn Period (770-476 BC) in China.

Indeed, many traditions are associated with eggs in China.

On lixia, known as “summer begins” on the Chinese calendar, children keep bags of cooked eggs around their necks for a whole day. And one of the customs during the Dragon Boat Festival is to make eggs “stand up,” which is believed to bring good luck. What’s more, red-dyed eggs are sent to relatives and friends to announce the birth of a baby.

In a sense, one man’s trash is another’s treasure. Yuan turns a commonly discarded item into a stunning piece of art.

He uses eggs of any size, from small quail eggs to large ostrich ones. Most commonly, he uses chicken and goose eggs, whose shells range in thickness up to 0.2 millimeters and 0.5mm.

First, he selects the eggs. This step requires close scrutiny. For chicken eggs, Yuan looks for those with a dark, smooth and spotless appearance. Shape also matters. The eggs must be neither too wide, neither too pointed. The ideal egg has a bottom about the same size as its top, Yuan said.

It is hard to imagine how a sharp, steel engraving tool can be used to carve on such a delicate surface. Yuan invited me to touch one of his completed works, but I dared not.

“Eggshells, if they are processed correctly, aren’t as fragile as people commonly think,” Yuan explained.

Before carving, a craftsman uses a needle to poke small hole in the bottom end to drain the contents. The inside of the shell is then rinsed and left to dry naturally in shade.

“The Mohs hardness of dried eggshells reaches 3.1 to 3.2, which is similar to that of Shoushan (pagodite) stones,” said Yuan, referring to a commonly used scale of mineral hardness.

The sharp, steel gravers used to carve on eggshells 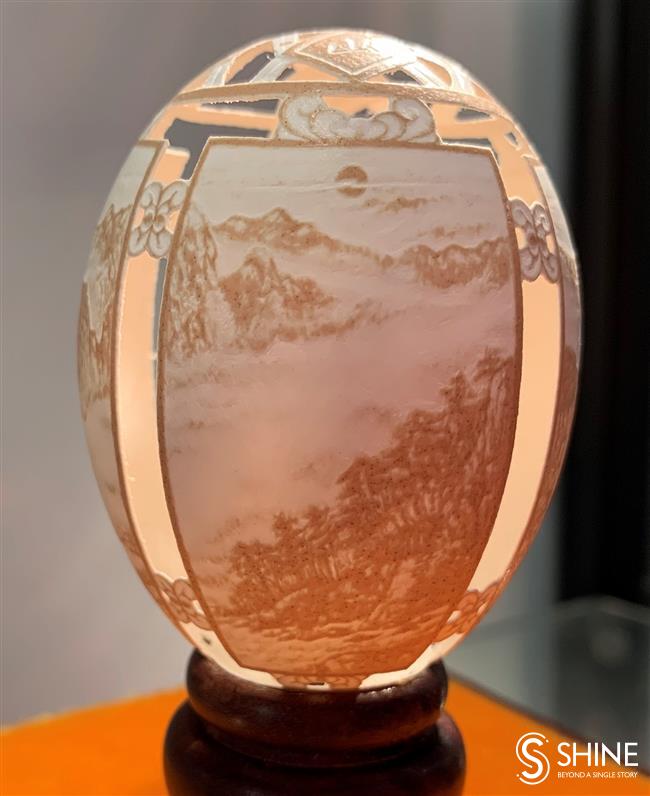 One of Yuan’s works is inspired by the traditional Chinese folding screen. Carved on a chicken egg, it features four panels, connected by four pairs of butterfly-shaped hinges. The panels portray majestic mountains and rivers.

The intricate art incorporates carving, painting, and calligraphy — all skills Yuan learned to love as a child.

“I was small and thin when I was young,” he said. “I dared not engage in chases and rough-and-tumble with other boys. Therefore, I painted and wrote calligraphy at home instead.”

When the textile mill where he worked closed in 1999, Yuan was left without a job. He opened a custom-made clothing shop for a while, and later worked as a hairdresser.

One day in the 1980s, Yuan took a business trip to the northeastern city of Dalian in Liaoning Province. While there, he encountered a street peddler making and selling egg artworks. Intrigued, Yuan observed the man’s art process for a whole afternoon. That night he tried engraving five eggshells by himself. The endeavor ended in failure.

The following four evenings, Yuan revisited the peddler and learned the basic techniques.

Returning home, Yuan took up eggshell carving as a hobby.

He said he always cherished the Chinese New Year when he was younger. But it wasn’t only the family reunions that excited him. It was eggs.

“Almost every family made egg dumplings for the New Year’s Eve dinner at that time,” said Yuan. “I helped them extract the yolks and kept the whole eggshells.”

That was 40 years ago, and he has become a skilled artisan in that time.

It has never been about money or fame. In fact, his artistry never drew public attention until 2007, when his community held a craftsmanship competition and his works drew widespread admiration. His carvings themed on the Beijing 2008 Summer Olympics and the Shanghai Expo 2010 expanded his notoriety.

Every Friday afternoon, Yuan teaches eggshell carving in a primary school in the Baoshan District town of Songnan.

“Most importantly, it allows them to achieve a sense of accomplishment.”