Opera painting, a unique art form in China, has obscure origins. Though there is no clear written record of its genesis, some unearthed cultural relics provide clues to its evolution.

An early colored pot discovered in Qinghai Province depicts three sets of dance patterns in clean, clear shapes on the inner wall of the pot. Five dancers in each of the three sets hold hands and face to the right, dancing with hair and accessories swaying.

Parallel patterns at the feet of the dancers are like ripples of water, giving the impression of dancing around a pond. This cultural treasure might be among the earliest opera paintings, which draw their inspiration from scenes of music and dance. 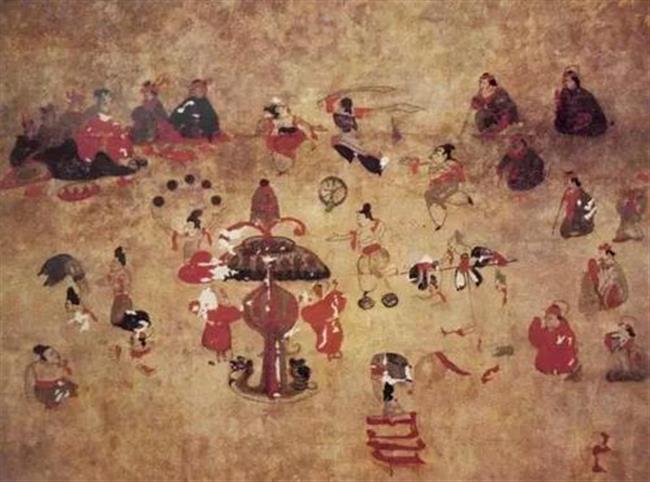 The mural “Hundred Plays,” done in the Han Dynasty (206 BC-AD 220), was discovered in Shandong Province. It shows a series of dances that include a sword dance, a dance with sticks and a phoenix dance. It also depicts three horses pulling a performance wagon, where musicians play and women perform acrobatics.

A bronze painting called the “Jiaodi Opera” was discovered in a tomb of the Warring States Period (475-221 BC) in Shaanxi Province. It shows people performing a Jiaodi Opera, which is similar to the sport of wrestling. In the picture, two topless men wrestle as two horses behind look on intently.

“Dance Picture” is divided into two parts. In the first, “Sword and Vase Dance,” the dancer holds a sword and handles a vase while other people dance around him.

The second part tells a story of a fairy and the devil. Women with small waists, wide sleeves and bloomers fly in the sky like fairies, holding colored ribbons. A muscular, fierce-looking man observes them from below.

During the Tang Dynasty (AD 618-907), masked performances called Damian Opera were popular. “King Lanling” is a masterpiece of that genre.

Lanling, the fourth son of King Wenxiang of the Northern Qi (AD 550-577), was a brave warrior who often wore a mask in battle. He was called the God of Fight.

His story was later adapted into Chinese opera. Actors performing the role wore a purple mask and a golden belt, holding a whip as they ordered soldiers to fight.

It is a pity that the play has since been lost in China. Today, the brave king’s costumes and postures can be viewed only in the artwork “Dances and Music,” by Japanese painter Takashima Chiharu.

In the Tang Dynasty, there were many theaters and music halls. Dancing was also a popular entertainment in the royal court. The painting “Night Revels of Han Xizai” by Gu Hongzhong portrays the spectacles in the Southern Tang Dynasty (AD 937-975).

In the Song Dynasty (AD 960-1279), painter Zhang Zeduan’s “The Riverside Scene at the Qingming Festival” depicted the theaters and concert halls, showing that opera performances had become an indispensable part of city life.

According to Meng Yuanlao’s “Dongjing Dreams Record,” there were more than 50 theaters and concert halls, and the biggest could house almost 1,000 people. Another account records about 280 different operas and dramas of the time.

The rising popularity of opera fostered the development of opera painting, or art derived from opera scenes and characters.

A book from the Song Dynasty, housed in the Beijing Palace Museum collection, includes two opera paintings. One, the “Zaju Opera Painting,” depicts a man and a woman telling jokes in a play, while the other, “Eye Medicine,” was painted to promote the opera “Eye Drops,” about 200 years before Western poster art emerged.

In the Yuan Dynasty (1271-1368), Chinese opera reached a golden age and gave birth to Yuanqu Opera.

There were more than 80 Yuanqu artists who turned out more than 500 works. The famous names include Guan Hanqing, Bai Pu, Ma Zhiyuan and Zheng Guangzu, with masterpieces such as “Snow in Midsummer,” “Rain on a Parasol Tree,” “Autumn in the Palace of Han” and “A Young Lady’s Soul.”

A mural found in the Shuishen Temple in Shanxi Province depicts Yuanqu artists performing on the stage. A banner in the upper part of the painting reads: “Artists are giving performances here.” 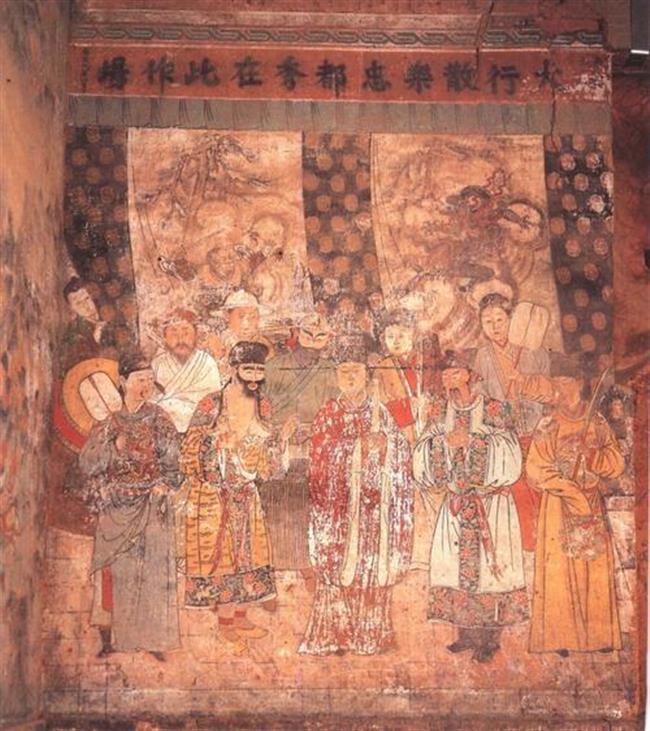 The mural found in the Shuishen Temple in Shanxi Province

In the Ming Dynasty (1368-1644), Kunqu Opera appeared, greatly advancing vocal, acting and script-writing techniques. It became fashionable for painters to illustrate the scripts. The operas “Peony Pavilion” and “Legends of the Purple Hairpin” both had illustrated script books.

Woodblock printing by that time had evolved into a fine art. Different schools of woodblock painting appeared with clean, smooth lines and vivid characters. Chen Hongshou was the best-known painter of that era. His works included “Leaves of Water Margin” and “West Chamber.”

Operas were requisite at the royal courts of the Qing Dynasty (1644-1911). A big stage was set up in the court. Southern House was established and later renamed Shengping Department to oversee performances and opera training.

Peking Opera became all the rage, both at court and among the populace at large. Opera artists and opera painting mushroomed. 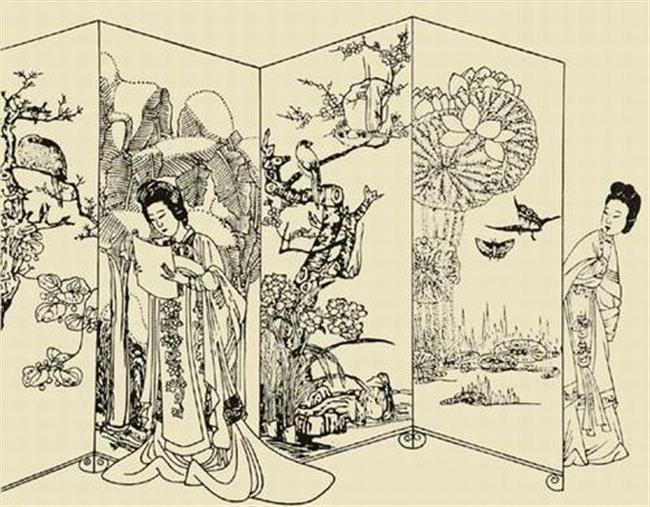 In more modern times, opera painting hit another peak. By 1840, Peking Opera had spread throughout China. Many newspapers published sketches drawn from the operas, vividly depicting performances of star artists.

Shanghai was the first city to publish a professional opera newspaper called “Paintings and Operas.”

After the founding of the People’s Republic of China in 1949, the environment of art changed. Opera paintings survived many challenges.

A fan of traditional opera, he never paints from stage photos. Instead, he watches live dramas and operas, and then talks with artists behind the scenes to understand the plots and become acquainted with characters.

This new series will introduce Zhu’s artworks and provide a fun, easy way to explore the traditional art forms of both painting and opera.

‘Great beauty’ immortalized in both music and painting 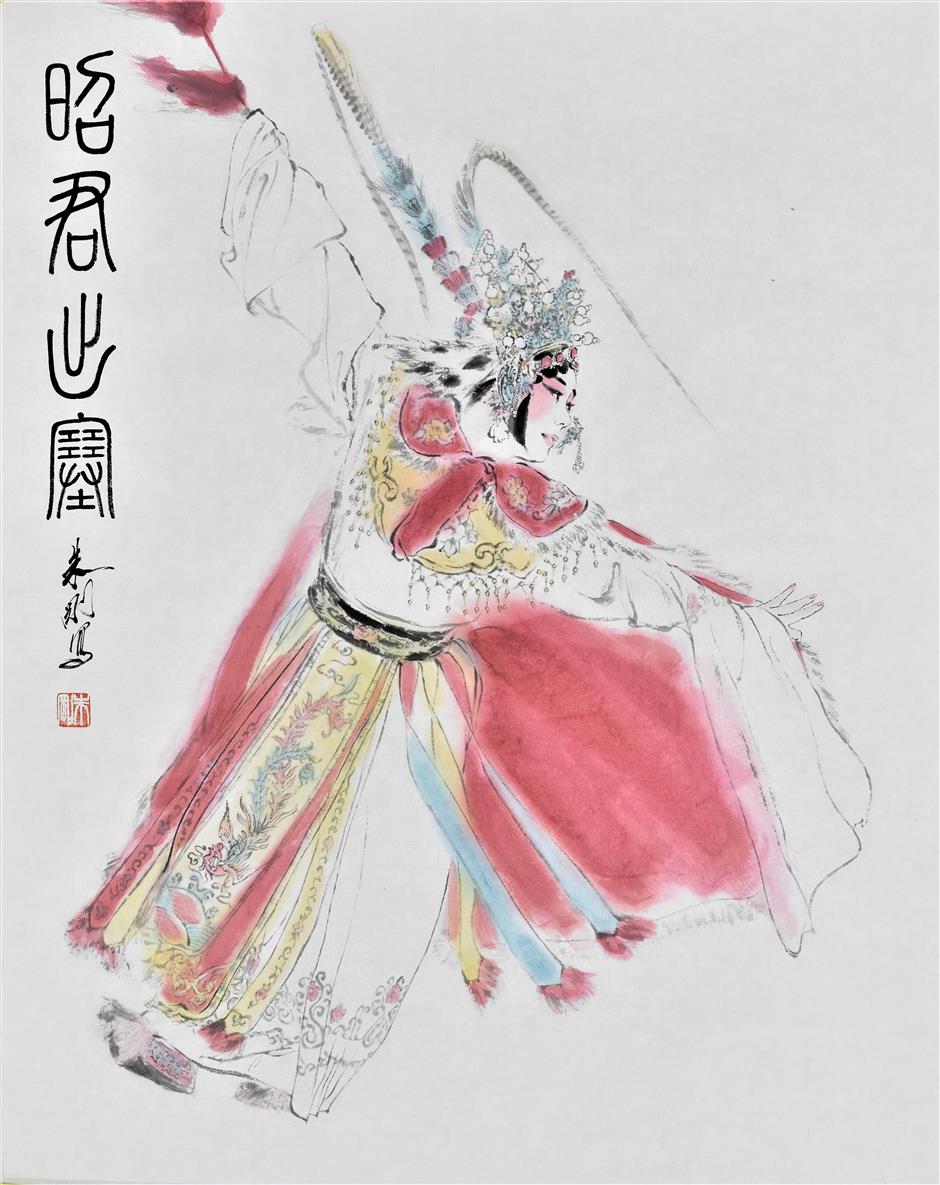 “Zhaojun Goes Beyond the Great Wall” by Zhu Gang

“Zhaojun Chu Sai,” or “Zhaojun Goes Beyond the Great Wall,” is a painting drawn from a famous story that has been adapted into various operas, novels and dramas over the centuries.

It tells the tale of Wang Zhaojun, one of the four great beauties in China, who was chosen to become a concubine of a Han Dynasty emperor.

But she refused to bribe the royal painter Mao Yanshou, who was in charge of painting the emperor’s concubines. Consequently, he deliberately painted her as ugly, and she never caught the eye of the emperor.

In the year 33 BC, Huyanye Chanyu, supreme leader of the Xiongnu, a nomadic tribe and empire beyond the Great Wall, threatened to invade Han territory. In order to defuse the crisis at the lowest possible cost, the Han emperor agreed to marry one of his daughters to the Xiongnu leader.

The emperor was crafty, so he chose Wang, who was painted as mediocre-looking, to pass off as his daughter. When Wang, gorgeously dressed, showed up at court, the emperor finally discovered her true beauty.

“Zhaojun Goes Beyond the Great Wall” recreates a classic scene as Wang starts her journey to the northern realm of the nomads.

In Zhu Gang’s painting, Wang looks far into the distance, with her whip in hand on the horse, and her neckwear and skirt fluttering in the wind. But her feet are pointed in the direction from whence she has come.

Using that device, Zhu lets viewers into the mind of Wang, who is filled with sorrow when she is about to cross the border.

“With tears in my eyes, how can I leave my home?” she laments.

In the work, Zhu cleverly teases out the feelings of sadness and homesickness.