A symbol of ancient Changsha 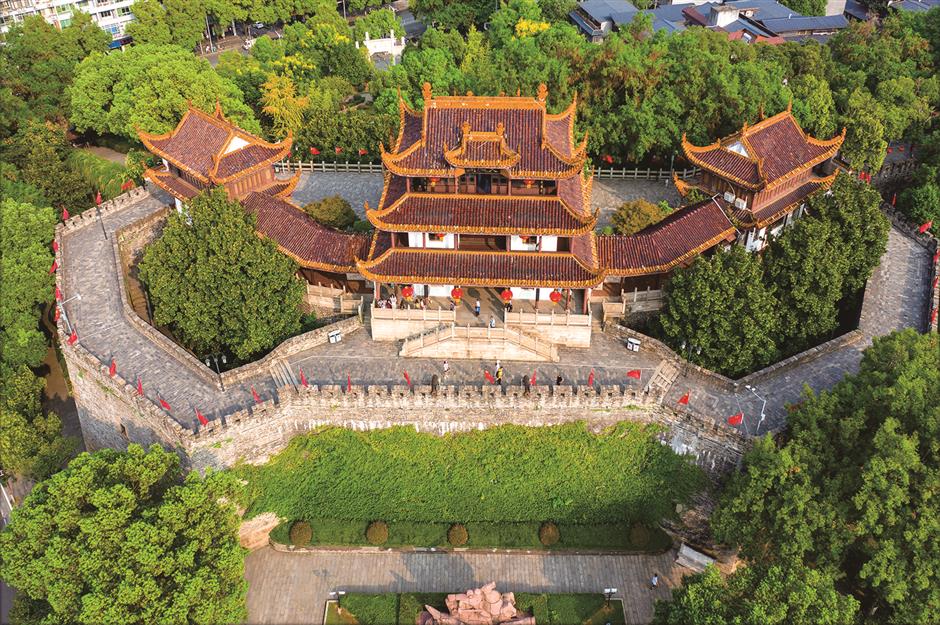 Past the eastern gate, along the old brick wall, patched with moss and steps up to the top, people get a bird’s-eye view of the city. Visitors can also idle away a sunny afternoon, listening to opera singers go through their vocal exercises on the rampart.

The city wall dates back more than 2,200 years.

The wall and the pavilion stand as a symbol of ancient Changsha and remind us of the city’s past glories and tragedies.

There was a citywide fire in 1938, known as Wenxi Fire, that burnt down more than 90 percent of Changsha’s buildings, killing about 30,000 people in the process.

Tianxin Pavilion was constructed in 1746 on the city wall.

As Changsha’s highest building at the time, the wooden structure featured three halls connected with corridors.

It was supported by 60 wooden posts with the carvings of 32 soft-shelled turtles’ heads, 32 bronze bells and 10 dragons. There are 62 stone statues of lions, horses, bamboos and carriages scattered around the halls.

Echoing with the Changsha Star constellation, the pavilion was first built as a place to observe astrology and hold sacrificial rites. Locals came to worship and pray at the foot of the city wall.

During Emperor Qianlong’s reign (1736-95), the Chengnan Library was relocated to Tianxin Pavilion.

The pavilion then become a cultural center for scholars and poets, who left a number of classic poems there.

Two statues of the Wenchang God and Kuixing Star, both gods of literature, education and learning in Chinese Taoism, were worshiped in the main hall by students who wanted to get the highest official rank through the national exam held every three years.

The structure may have been used as a star observation platform, or sacred religious site, but Tianxin Pavilion was mostly remembered as an important military rampart.

It was a battlefield in 1852 when Xiao Chaogui, one of the leaders of the Taiping Rebellion (1850-64), led his troops trying to overthrow the Qing Dynasty (1644-1911). The army were defeated at the corner of the city wall. The coup failed.

Even today, you can still spot bullet holes and shot marks in the old, mottled bricks of the city wall.

The city wall was built from soil as Changsha’s first line of defense.

It was reinforced by bricks and stones in 1372. And in the following 600 years, the wall was expanded, heightened and strengthened for military purpose.

Tianxin Pavilion was set up on the highest section of the wall.

There was no city gate on this section, which meant people had to take a detour to get into the city, a design rarely seen in ancient Chinese architecture.

The entrances, often called “Moon City,” were on the wall’s two sides, protecting the wall and working as a buffer zone to station troops.

This is another exception in Chinese architecture because a “Moon City” was built outside the city wall to guard the city gate. However, Tianxi Pavilion’s Moon Cities were within the wall, which could puzzle intruders, who would get lost in a maze without a gate.

Eight holes were carved for cannons on the wall, the upper four for long-range ones and the lower four for the short-range.

Two secret tunnels that linked the two moon cities were found underground. One at north led all the way to Changsha’s largest grain barn at the time, or today’s Wuyi Square.

It was built by the Qing’s official army in one month to fight the troops of the Taiping Rebellion.

The tunnel saved the lives of many Changsha people.

Two iron cannons still stand on the city wall and in front of the Tianxin Pavilion. They were made from iron Buddhist statues in a local temple and beat back attacks from the rebels.

The pavilion survived the civil wars, but it did not escape the big fire in 1938 that burnt down almost the whole of Changsha City.

The fire may have destroyed a city, but it did not smash the city’s spirit and civilization.

The Tianxin Pavilion we see today was reconstructed in 1984. Monuments have been set up to remember what the city has gone through since its construction.