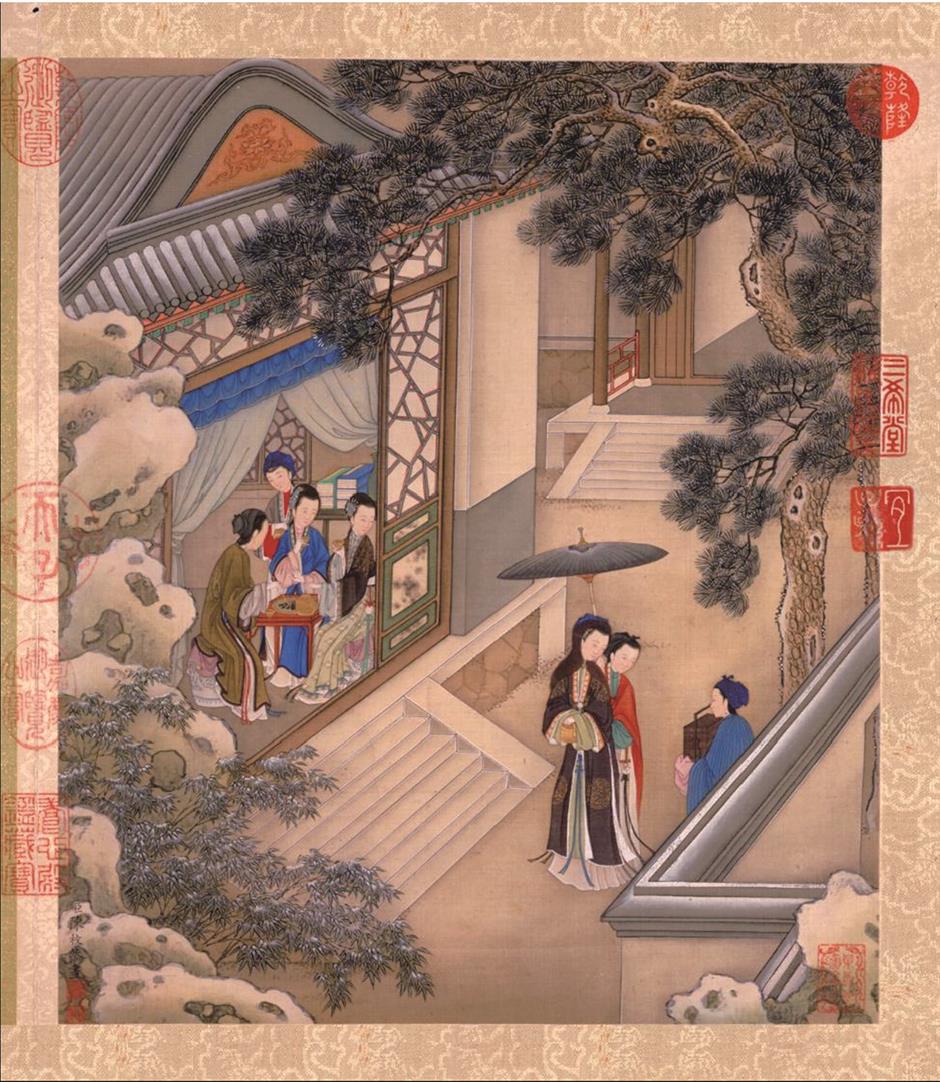 The Palace Museum in Beijing

The twelfth painting of the album of “Ladies’ Seasonal Activities of Twelve Months” by Chen Mei.

An album of paintings created by Qing Dynasty (1644-1911) artist Chen Mei has opened a window into the leisure life of ancient concubines inside the Forbidden City.

Chen, who was born in today’s Shanghai, served as a court painter for both Emperor Yongzheng (1678-1735) and Emperor Qianlong (1711-99). One of his most famous works is the Qing version of “Along the River During the Qingming Festival,” which was created by him and four other court painters.

Painted in the third year of the reign of Emperor Qianlong, the album named “Ladies’ Seasonal Activities of Twelve Months” (Yueman Qingyou Tu) consists of 12 works.

In the first month of the lunar calendar, concubines admire plum blossoms in the imperial garden, which is decorated with lanterns to celebrate the Chinese New Year. They wear colorful robes and tian-tsui hair accessories, which are made of iridescent blue feather of kingfishers.

The second painting depicts a scene of the court ladies playing a game of go in a pavilion, which is surrounded by plants and stones. Several attendants serve them with tea and snacks.

In the third lunar month, new leaf buds appear on willows, which signals the beginning of spring. A concubine plays with a swing under the tree while others watch from a nearby bench.

In the fourth lunar month, court ladies admire flowers, such as peony blossoms and magnolia flowers in the garden. They cut flowers and put them in a porcelain vase.

One woman, who wears a pair of golden bracelets, washes her elegant hands in a washbowl. To the left of her, another woman in a blue gown smiles into a mirror. It seems that she is very satisfied with her appearance.

When the weather becomes warmer, in the sixth month of the lunar calendar, court ladies row on a lake and pick seedpods from a lotus.

In the hot seventh month of the lunar calendar, concubines celebrate the Begging for Skills Festival, or Daughter Festival, which is a custom related to the Qixi Festival, also known as Chinese Valentine’s Day. They pray for wisdom and supreme skills.

In the eighth month of the lunar calendar, the court ladies climb a terrace and enjoy the glorious moon.

In the deep autumn, in the ninth lunar month, the ladies admire the beauty of chrysanthemum flowers, which is one of the Double Ninth Festival customs, climb a high mountain, drink chrysanthemum liquor and wear cornel twigs.

The tenth work depicts concubines’ delicate craftsmanship as they embroider flowers in silk.

In the eleventh month of the lunar calendar, court ladies gather to discuss artworks indoors.

As the weather gets colder, they set up several braziers in the room to keep warm. Although the work portrays an indoor scene, a plum tree, which can be seen through a round window, reveals that winter has arrived.

In the freezing twelfth month of the lunar calendar, snow falls. The bamboo and pine tree leaves are covered with snow. Wearing a thick coat, a concubine goes outside to get some inspiration to write poetry. The other four women stay indoors to drink tea and eat snacks.

The harmonious relationship among concubines is different to what is portrayed on the TV in Chinese palace dramas, which usually witnesses concubines scheming against each other.

Chen used the paintings of feminine beauty created by Tang Yin and Qiu Ying of the Ming Dynasty (1368-1644) for his aesthetic standards. They look slim and graceful, which is different from the full-figured fashion in the Tang Dynasty (AD 618-907).

Emperor Qianlong adored the album and asked his court craftsmen to make it into an ivory artwork. The father and son team of Chen Zuzhang and Chen Guanquan, with three other craftsmen, spent over a hundred days carving the paintings, which are made of ivory and decorated with jade, ruby, sapphire, agate and turtle shell.

Each painting is accompanied with a poem written by Emperor Qianlong. In the carving version, Chinese characters are shown through a mother-of-pearl inlay technique.

There are 103 figures featured in the ivory carving, which reflects China’s superb carving and inlay technique in the 18th century.