For precious art in poor health, the doctor is in

Wei Wenfu, who specializes in restoring ancient treasures, thinks of himself as a healer.

“I am a general practitioner, and my patients are historical paintings and calligraphy,” he said.

Wei’s studio is hidden away in a residential area near Qibao ancient town in Minhang District. A large red wooden desk roughly equivalent to the size of two ping-pong tables sits in the center.

Slips of paper, the remnants of back layers of paintings and calligraphy works, are pasted on the planked walls to help restorers supply missing strokes.

The studio may seem look disheveled, but it’s actually a humble treasure trove, with five security cameras keeping an eye on every corner of the room.

This wealth of artworks sits in Wei’s studio, waiting to be brought back to life.

“My studio is rarely open to the public mainly to guard the security of the artifacts and the privacy of customers,” said Wei.

He said he is afraid that visitors might take photos of some of the artworks and seek to have them forged. Besides, many artworks are auctioned after being restored, and prices could be affected if their previously poor condition were revealed.

“We can’t show off our skills to the public, but we can renew the vigor of worn artworks with discretion,” said Wei. “Skill and reputation are very important in our small circle.” 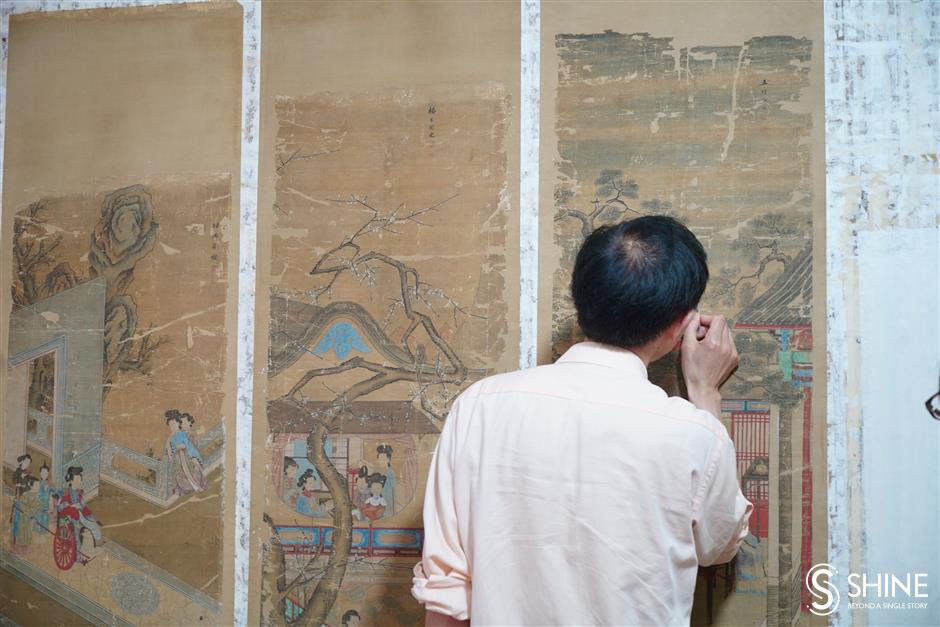 Ancient paintings are pasted on the planked wall, waiting for Wei to supply missing strokes.

Wei is a native of Danyang in Jiangsu Province. In 1979, he was apprenticed to Dou Xiangyun, a retired restorer at Shanghai Museum who returned to his hometown to become a mentor. Dou was known as the “master of handscrolls,” specializing in restoring antique handscrolls. From Dou, Wei inherited the techniques of both Suzhou and Yangzhou styles of mounting, which were combined into the Shanghai style.

Moving to Shanghai in 1983, Wei worked at a bus company at first. Four years later, he quit his job and opened a studio dedicated to art restoration.

“Restoring the original appearance of an ancient treasure is the basic principle,” said Wei. “Flat, clean, firm and appropriate color matching are the basic requirements.”

The day I visited his studio, Wei was about to restore a calligraphy work created in the Ming Dynasty (1368-1644).

The first step was to wash the artwork. Gently placing it on a concrete table in his courtyard, Wei poured boiling water directly over the paper. I was aghast and could hardly believe what I was seeing. In the minds of ordinary people, if paper gets wet, it becomes wrinkled or spotted with water stains.

“With xuan paper, that does not happen,” explained Wei, referring to an ancient type of paper renowned for its softness and fine texture. “Made of the blue sandalwood bark and rice straw, xuan paper already goes through washing in the process of making it.”

“The washing step both cleans the ancient artwork and softens its glue, which is needed for the next step — the peeling off of backing layers,” said Wei. “It is the most difficult step in the whole process.” 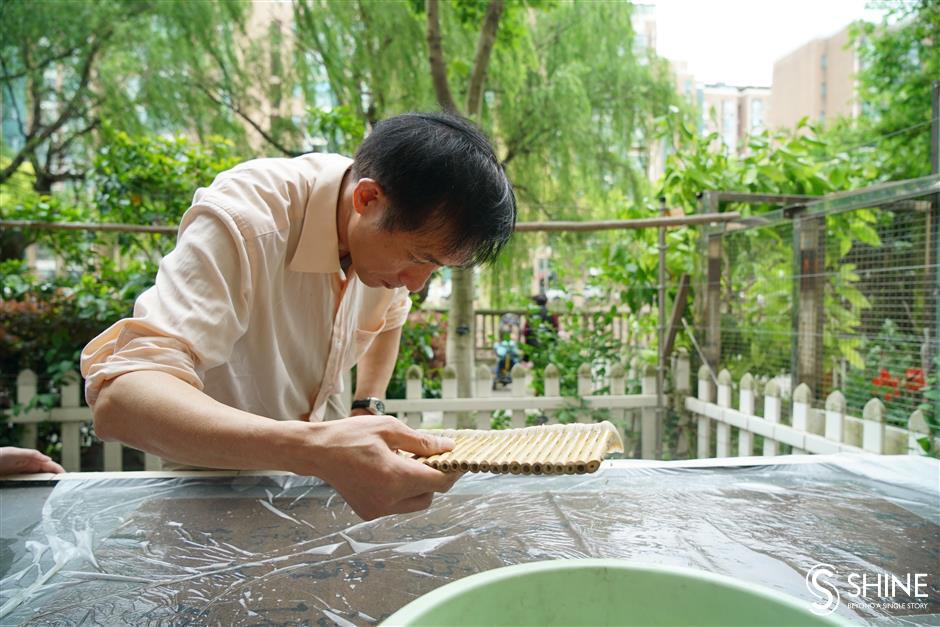 Wei uses a paibi, an ink brush made of goat hair fixed on a row, to wash a calligraphy work.

Ancient paintings and calligraphy works are inseparable from their mountings. To better preserve them, mounters paste several layers of paper or silk brocade on the back of the artifacts.

To restore a painting, the old back layers must be peeled off, which is akin to treading on thin ice. Moving the calligraphy work to the large red desk indoors and putting it face down, Wei closed the courtyard doors to keep out any wind and used a tweezer to peel off the layers, piece by piece.

The layer directly attached to the painting is called mingzhi, which Wei likens to a human heart because it holds the essence of the life of a painting or calligraphy work.

“It will take three days to completely remove the mingzhi of the calligraphy work,” said Wei.

To demonstrate the steps after that, Wei switched to the restoration of an ancient painting on silk, probably created in the Yuan Dynasty (1271-1368). Unlike artworks on paper, those on silk are mounted on silk brocade. Wei applies different techniques according to the needs of each artwork.

“As a ‘doctor,’ I check each artwork first and then suit the remedy to the case,” said Wei.

The third stage is mending, which mainly consists of pasting a new mingzhi on the back of an artwork and filling in the color. The painting on silk suffered from rifts, so Wei mended them with silk of similar texture and color.

Ancient Chinese painting is done with a brush dipped in black ink or colored pigment. Wei said artwork in black ink, which has six tones, is the hardest to restore.

The final stage is mounting, by which paintings and calligraphy works become hanging scrolls, handscrolls or folded albums. Wei used a wax and a pebble to polish the back layer.

“The wax makes artworks insect-resistant,” said Wei. “Rubbing against the back layer, the pebble is used to make paper smoother. By doing so, the friction between the back layer and the painting is reduced when the handscroll is rolled up.”

Over the past 40 years or so, Wei has restored thousands of paintings and calligraphy works, mainly from private owners. Many museums have also sought his help to restore collection pieces.

“There are less than 30 authentic restorers in China, with hundreds of thousands of artworks waiting to be restored,” said Wei. “I have around 15 apprentices. It’s hard to develop talent. Many want to become restorers only because of the money they can earn. Restoration is extremely dull work, requiring patience and some skills in calligraphy and painting.” 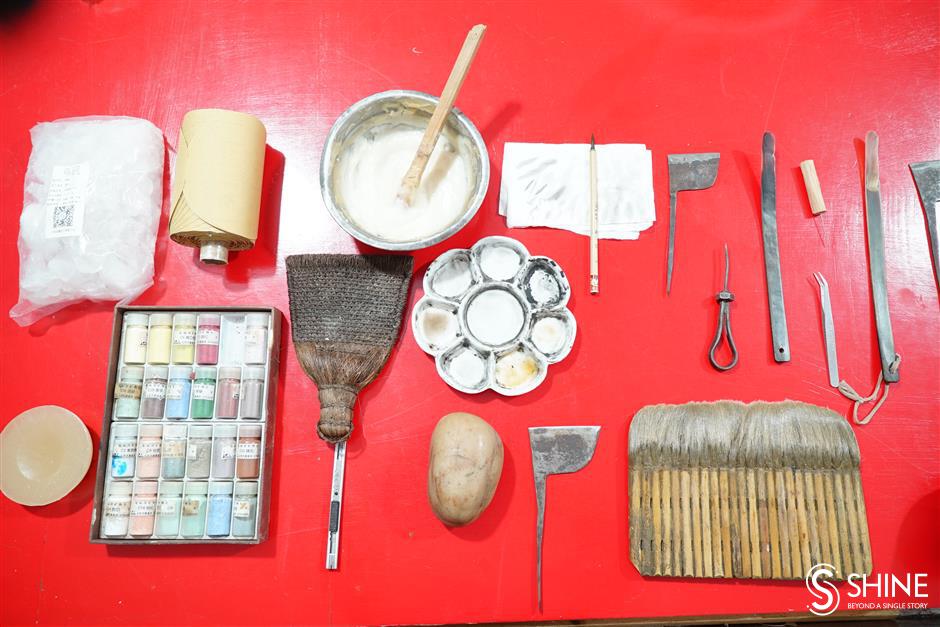 Tools used during restoration of paintings and calligraphy works

﻿
Special Reports
﻿
61843
,
National treasure unearthed by tomb raiders
Artist develops a distinctive style for capturing the world of opera
An ancient deity is kinder than he looks
Chinese poetry set to song moves out into a broader realm
Zhao Puchu calligraphy show under way at Shanghai Museum
Culture of the Silk Road goes on display
Tilling and weaving a fabric of life
For precious art in poor health, the doctor is in
Metacollage: where East and West intertwine
Iconic red-brick facade reminiscent of former glory of innovative hospital in city
EXPLORE SHINE