Chinese poetry set to song moves out into a broader realm

When baritone Liao Changyong was taking part in vocal competitions around the world while still a student, he couldn’t help but notice that Chinese songs never appeared in the choices given to contestants.

“Since then, I have been determined to try to promote Chinese artistic songs so they would appear on international stages,” said Liao, who is now president of the Shanghai Conservatory of Music.

Liao hasn’t failed in the promise to himself. In collaboration with Germany’s Breitkopf & Hartel — the world’s oldest music publishing house — the conservatory this year is publishing “Sixteen Chinese Ancient Poem Art Songs” in English, French, German and Italian. 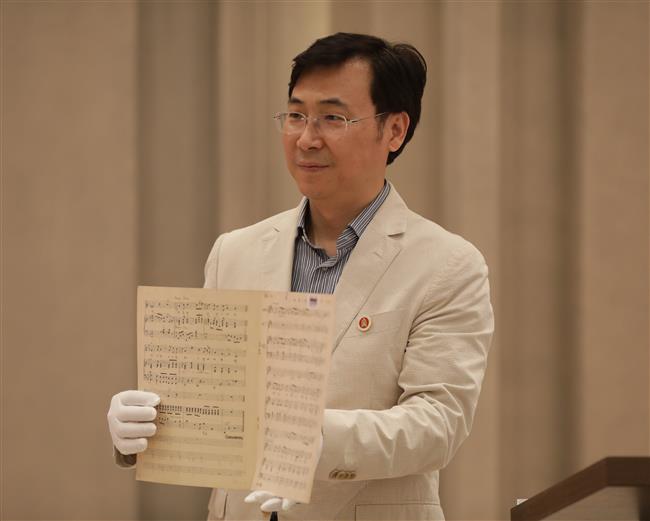 Liao Changyong poses with the original musical score for the Chinese art song “Three Wishes for A Rose,” which was created in 1932.

Songs based on famous Chinese ancient poems include “Night for Maple Bridge,” “River of No Return” and “Phoenix Hairpin.”

Liao will give personal demonstrations of the songs, to be recorded and released together with the book.

“The cacuminal, front and back nasal tones in Chinese pronunciation can be confusing for foreign singers,” he explained. “My demonstration will help the songs become proper international selections.”

Introducing Chinese artistic songs to music followers around the world through international performances and other activities is nothing new for Liao and the conservatory.

Conservatory singers have received invitations from the Savonlinna Opera Festival, the RheinVokal festival and the Royal Welsh College of Music and Drama this year, but performances had to be postponed to 2021 due to the coronavirus pandemic.

The publication of “Sixteen Chinese Ancient Poem Art Songs” is among a series of academic and promotional events the conservatory is organizing this year to mark the 100th anniversary of the Chinese art song.

It began in 1920, when Guangdong Province native Liao Shangguo composed the song “River of No Return” during his study in Germany. He borrowed Western composing techniques but based the lyrics on “Reminiscence of Red Cliffs,” by poet Su Shi (1037–1101).

“Chinese art songs had a very high starting point, given the depth and excellent combination of vocal and piano techniques featured in ‘River of No Return,’” said composer Lu Zaiyi, former president of the Shanghai Musician Association.

“Despite a devious development path, Chinese art songs have a solid foundation.”

According to Feng Lei, vice president of the Shanghai Conservatory of Music, the Chinese art song is a combination of poetry and music, which speak of changing eras and their people.

“A lot of songs have revolutionary themes and served as encouragement for people during difficult times in China’s history,” said Feng.

Poetry and music have been entwined for centuries. That association is reflected in the Greek verse sung to the playing of the lyre, European troubadours of the Middle Ages, the lieder of Schubert, the tone poems of Sibelius and Strauss, and even opera librettos based on Shakespearean works.

The Shanghai conservatory plans to organize art song-themed forums in the second half of the year. The conservatory is also taking part in the publication of “Musical Scores of Chinese Art Songs over 100 Years,” compiling an art song dictionary and a book series on the history of the songs.

In November, a Chinese Art Song International Vocal Music Contest will be held for contestants from home and abroad.

The inaugural competition took place in 2018, attracting applications from around 600 singers from five countries for the first round of selection.

Special Reports
ADVERTISEMENT
Chinese poetry set to song moves out into a broader realm
In stages, live theater makes a tricky return
Zhao Puchu calligraphy show under way at Shanghai Museum
Culture of the Silk Road goes on display
Tilling and weaving a fabric of life
For precious art in poor health, the doctor is in
Metacollage: where East and West intertwine
Iconic red-brick facade reminiscent of former glory of innovative hospital in city
Women wear their hearts on their sleeves
Only surviving 'safe' held empires' top secrets
EXPLORE SHINE