The essentials of artwork: ink and brushes

A shabby building amid a heap of ruins hides a treasure that even nearby residents don’t know about. The inner-city building facing demolition houses part of China’s cultural heritage.

Located on Nanshan Road in Jing’an District, the building is home to the ink factory of Cao Sugong and the calligraphy brush factory of Zhou Huchen. Ink and brushes are essential components of Chinese art.

The timing of urban renewal plans to raze the building, where the factories moved from the Old City of Shanghai in 1956, is still uncertain. Before the workshops are relocated to a new location, I decided to pay a visit. 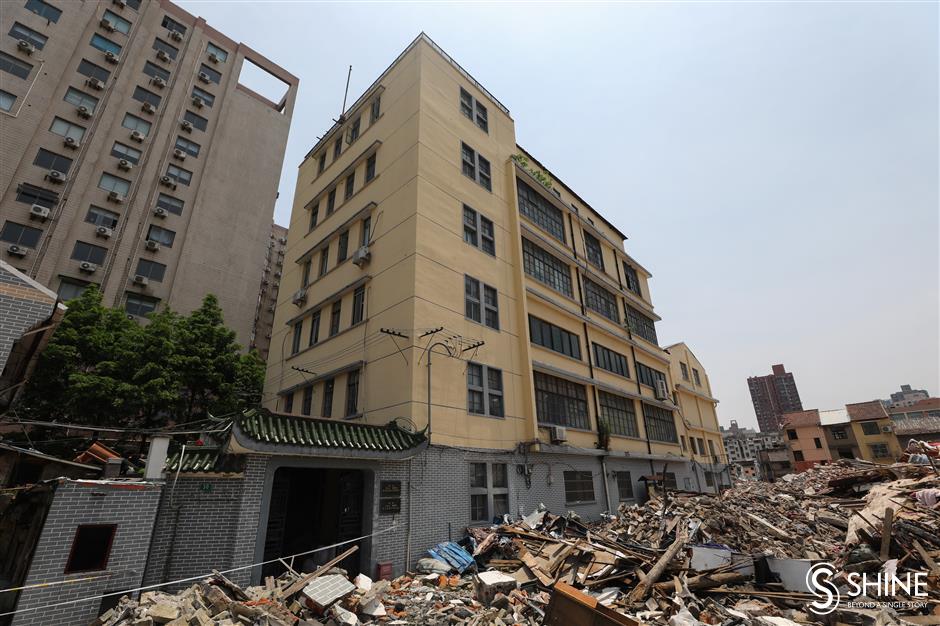 A shabby building amid a heap of ruins houses the ink and brush factories.

A waft of ink scent greets me when I enter the building. An endorsement letter for the Cao Sugong Ink Factory, signed by many well-known people, hangs in the hall.

Established in Anhui Province in 1667, the factory is named after its founder. It moved to Suzhou before settling in Shanghai in 1864, where it attained a high reputation for top-quality ink.

The factory has made customized inksticks for many important figures, including Li Hongzhang (1823-1901), a Chinese politician, general and diplomat of the late Qing Dynasty (1644-1911).

Mei Lanfang (1894-1961), a notable Peking Opera artist, ordered an array of Cao Sugong inksticks as gifts for foreign fans before leaving for New York. A group of famous Shanghai-school painters, such as Wu Changshuo (1844-1927) and Ren Bonian (1840-1896), worked with Cao Sugong to create patterns and improve ink tones.

“A tiny inkstick requires four kinds of artists — an ink maker, a carver, a calligrapher and a painter,” says Xu Ming, master of inkstick making at the workshop.

Xu is the 15th generation of Cao Sugong inkstick makers. He also serves as director of the current factory.

“Materials of superior quality are the characteristic of Cao Sugong inksticks,” says Xu. 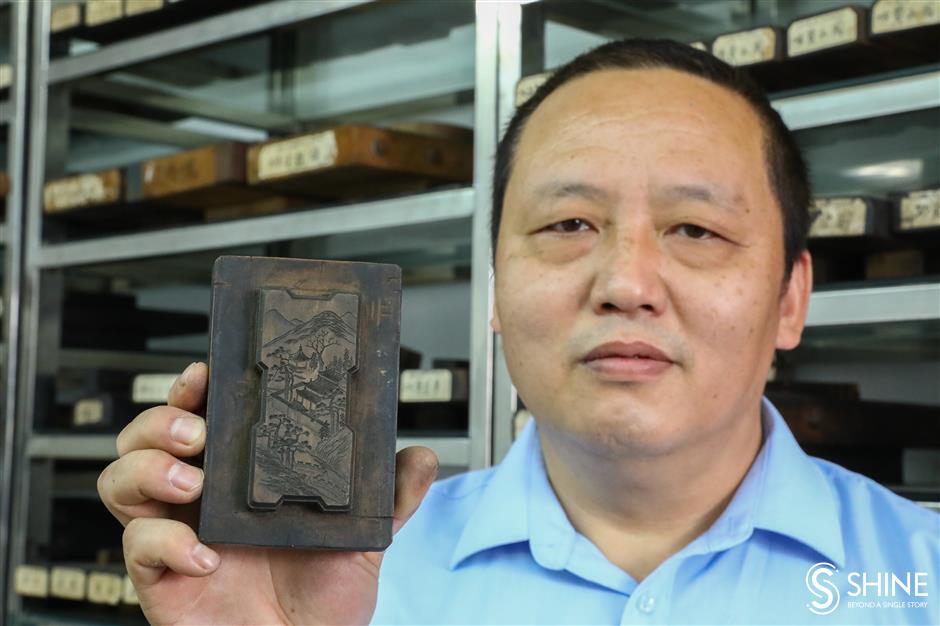 The glue used in the process is primarily extracted from the skins and bones of cattle and then stirred with soot from tung seeds. To improve the fragrance, luster and insect resistance of the inksticks, more than 20 kinds of Chinese medicinal herbs are added, along with gold leaf.

According to Xu, some materials used in the traditional recipe have had to be changed due to the wildlife protection measures. For example, musk has been replaced by civet secretion.

A craftsman named Tong Yijun is beating warmed raw material repeatedly with a hammer weighing dozens of kilograms. With such strenuous movements, I am not surprised that the room’s air conditioner is set on low. Tong’s blue shirt is smeared with ink and sweat.

He divides the pounded paste into pieces and weighs each of them, using screws rather than counterweights on a scale. The pieces are placed into different molds made of briar and then pressed by machine.

There are typically three categories in terms of weight: 1 liang (equivalent to 31.25 grams) needs to be dried in the shade for six to eight months; 2 liang, which needs to be dried for eight to 12 months; and 4 liang, which requires up to two years of drying. During the drying period, craftsmen turn the somewhat wet inksticks over every day.

When the drying is complete, craftsmen polish the inksticks and color them with patterns. 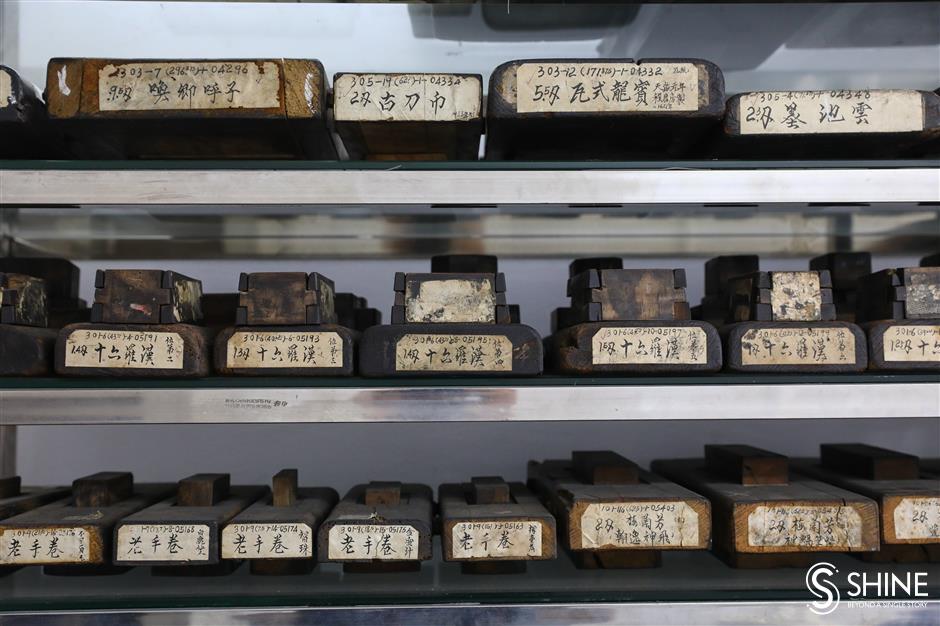 Thousands of antique molds are stored in the building.

The dilapidated building is more than just a workshop for making inksticks; it also houses a storeroom of thousands of antique molds. The earliest one was made by Cheng Junfang, a renowned inkstick maker of the Ming Dynasty (1368-1644).

“These are cultural relics,” says Xu. “In order to protect them, we are making a rubbing of each of them. The rubbings will be given to experts who will study the patterns and texts carved on the antique molds.”

The Zhou Huchen brush factory also has a long and illustrious history. It was founded in Suzhou in 1694 and moved to Shanghai in 1862.

Wu Qingchun, 59, an inheritor of the art of brush making, has dedicated himself to the craft since 1979.

“A good brush maker needs not only to master techniques but also know calligraphy,” Wu tells me in an office filled with calligraphy works. “Only by using a brush can a craftsman improve his products.”

Among the locations where the brush factory has operated is Huzhou, a city in Zhejiang Province famous for its silk production. Silkworm “food scraps” — mulberry leaves — are used to feed local goats, giving the animals a white, glossy goat hair ideal for the making of brush tips. 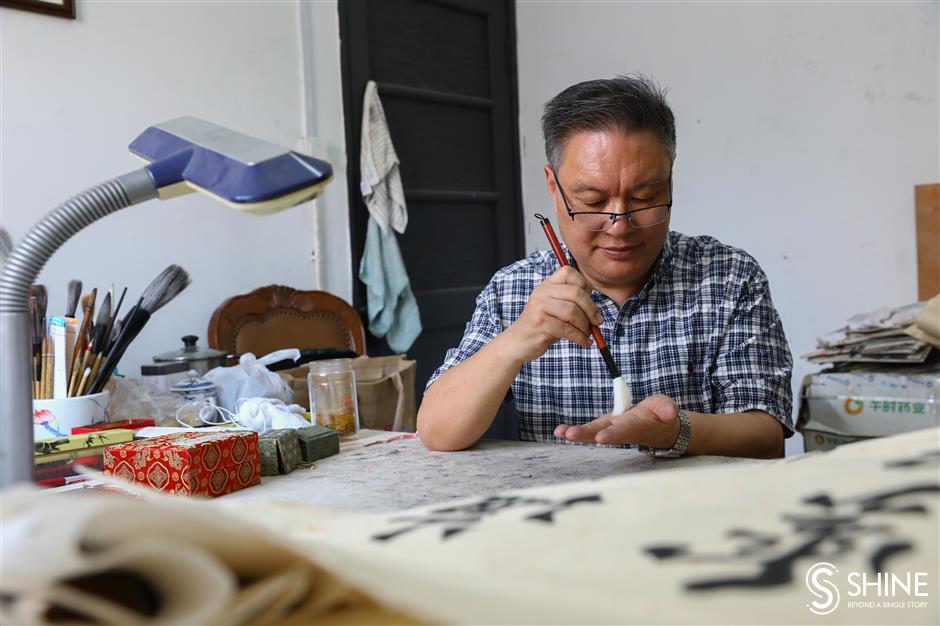 Wu Qingchun, 59, an inheritor of the art of brush making

The ink and brush brands have both been seeking to upgrade their products through innovation and to increase awareness of their skilled arts among younger generations.

They are using online channels, including live-streaming, to promote products. They also adjusting manufacturing processes to accommodate changes in writing habits.

Xu and Wu are both excited and worried about the future. Excited in the sense that their workshops will be moving to a new site that will allow them to add a studio, museum and shop. Visitors will be able to see how inksticks and brushes are made and, at the same time, try their hand at calligraphy.

They are worried, however, that the new location might be far from the city center, making it harder to hire and retain craftsmen.

“Talent is the backbone of passing on heritage skills,” says Xu.

“Some of my work colleagues initially expressed concern about the relocation, but now they seem to accept it. The most important thing for us is to protect traditional techniques.”