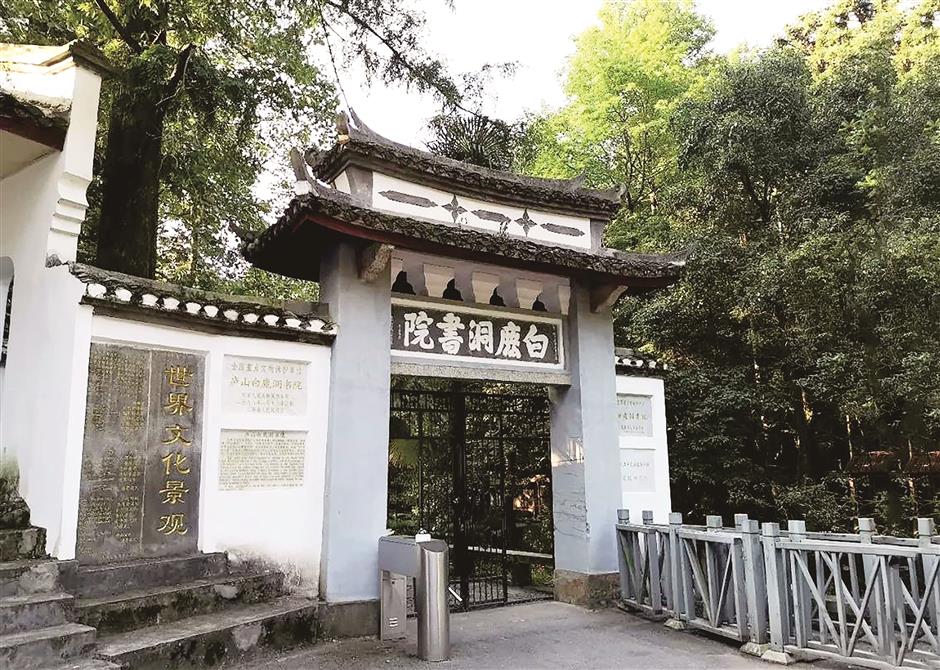 It is said that in AD 785, scholar Li Bo and his elder brother Li She swotted in the valley in seclusion. They raised a white deer, so clever and tactile that it often tramped miles to buy paper, books, brushes and ink downtown and then brought them back to its masters.

Years later when promoted as governor of Jiangzhou (today’s Jiujiang City), Li Bo set up a kiosk and planted flowers in the valley and named the place after the deer to remember the days when the brothers studied hard.

In AD 940, the kiosk was renovated into a school and became the only educational institution sponsored by central government outside the capital. However, it wasn’t until 1179 that White Deer’s Grotto Academy started to shine as a center of learning.

Zhu Xi (1130-1200), one of the most influential Confucian scholars, visited the academy one day and found broken walls overgrown with weeds. As the governor of Nankangjun (in today’s Lushan City) at the time, Zhu ordered the workers to rebuild and expand the academy.

Zhu hired teachers, set down school rules, enrolled students and allocated land for the academy. Within years, Bailudong Academy became one of the most prominent education institutions in China. It attracted a steady flow of famous philosophers, historians and scholars who gave lectures and fostered a large number of outstanding graduates.

The school was involved in the instruction, collection and preservation of books, religious sacrifices, development of curricula and lectures. The way they taught students and managed the school had a profound and lasting influence on the development of Confucianism, not only in China but also in Japan, South Korea and Southeast Asia.

In the late 19th century, China’s politics and economy radically changed and an educational revolution kicked off to abolish traditional Chinese classics and learn Western civilization.

The academy was shut down in 1903. And a big fire, after the 1911 Revolution, destroyed most of the books it had collected.

In its heyday, Bailudong Academy, which was built based on the layout of the Temple of Confucius in Qufu, Shandong Province, had more than 360 architectural features.

Today there are only five compounds left and about 150 ancient stone-carved sculptures marking the school’s golden past.

Past the front gate hangs a plaque of the academy’s name, inscribed by calligrapher and poet Li Mengyang (1473-1530).

The memorial hall of Zhu Xi, built in 1709, is a tribute to the great scholar, who made contributions to Chinese philosophy and has been described as the second most influential thinker in Chinese history, after Confucius.

On the right side of Zhu’s statue is a stone stele engraved with Bailudong Academy’s doctrines. It’s still enlightening today to read them: “Do not do onto others what you do not want others to do onto you; keep your promise to the friend, have respect to the elders and stay loyal to the emperor/country; study extensively, ask questions in detail, think carefully, and practice thoroughly.”

Lisheng Hall was a place where students worshiped Confucius. The great philosopher’s painting is hung high on the big wall, surrounded by stone vases and incense burners. On the back wall is a wooden board hand-written by Zhu with four Chinese characters of “loyalty, filial piety, honesty and abstinence,” which has been instructing the Chinese-speaking world for centuries.

Further into the academy, at the left foot of the mountain, with Wulao Peak in the distance, is the Lonely Pavilion, where Prime Minister Li Wan of the North Song Dynasty (960-1127) revised books. A few steps away in the east is Zhenliu Bridge, where Guandao Creek runs through the academy.