Thousands of years in blue-and-white color

In cooperation with Nantong Blue and White Cloth Museum in neighboring Jiangsu Province, Jiading Museum has launched an exhibition on the culture and art of Nantong’s blue-and-white cloth through September 12.

It was created by a woman in Anting Town surnamed Gui, according to the old documents. The production was in its heyday in Jiading during the Ming and Qing dynasties.

Making the blue-and-white cloth is a traditional handmade technique, using natural bluegrass as a dye. The beauty of blue and white colors is the result of seven processes that include weaving, carving, gluing, painting, dyeing, fixing colors and drying.

In Nantong, the blue-and-white cloth industry prospered due to its natural environment.

The cloth was listed as a national intangible cultural heritage in 2006.

Showcased at the Jiading Museum exhibition is exquisite craftsmanship, including bags, sheets and clothes with blue-and-white patterns, taken from the Nantong Blue-and-White Cloth Museum. They have been collected from Jiangsu and Zhejiang provinces and Shanghai. Around 180 pieces of the latest creative designs, from traditional to modern styles, are also on display.

The exhibits represent the highest level of Chinese blue and white cloth-making techniques.

The economy of ancient Nantong relied mainly on agricultural fields which were perfect for growing cotton. Then, the cotton industry pushed forward the development of weaving.

Since then, local women were busy weaving at home instead of farming in the fields. 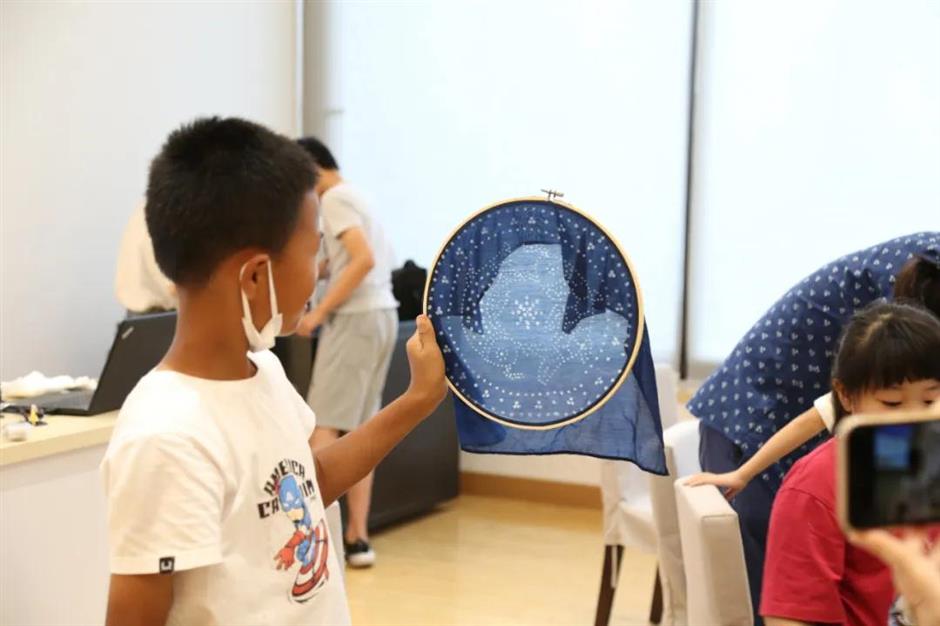 A boy is proud to show off a handmade blue-and-white cloth he learned to make at a workshop in Jiading Museum, part of an exhibition to promote the traditional handcraft.

The profound culture and diversified custom of Nantong was the reason why the cloth became all the rage.

Only a city full of culture and history could produce such cloth with various patterns of profound meanings.

For example, the peony means rich, while the vase means safe, literally in Chinese. So the pattern of peony in a vase has the moral of auspiciousness, rich, peace and prosperity.

The exhibition aims to introduce the beauty of the traditional artwork and spread knowledge of the intangible cultural heritage through these exhibits to achieve the goal of passing down techniques and protecting this traditional craft.

The curator of the exhibition is Wu Yuanxin, dean of Intangible Cultural Heritage Institute of Nantong University and curator of Nantong Blue and White Cloth Museum. He has been focused on the rescue, preservation, collection, research and inheritance of arts and crafts for a long time.

Wu was born into a family making a living by producing cloth. He witnessed his grandmother spinning, his mother weaving and his father dyeing at home when he was a little kid. He started working in a blue-and-white cloth production plant when he was 17, worked as an apprentice for five years in a dyeing house and studied carving for another five years.

Residents are required to make an appointment through Jiading Museum’s official WeChat account before visiting the exhibition.

“Culture and Art of Blue and White Cloth in Nantong”