Exploits of the Monkey King beloved by Chinese young and old

"Journey to the West,” which chronicles the adventures of the Monkey King, or Sun Wukong, is a household classic novel well-known by Chinese young and old.

Written by Wu Cheng’en in the Ming Dynasty (1368-1644), the novel has been adapted into countless operas, movies, TV series, video games and animations.

The Monkey King is a legendary hero of immense strength. He can run with the speed of a meteor and adopt 72 earthly images. He fights devils and monsters, helps those in need and brings justice to the wronged.

He fulfills the rich imagination of children but also exemplifies the general Chinese sense of right and wrong, and their image of what constitutes a hero.

Painter Zhu Gang’s brush works have captured the Monkey King as portrayed in many traditional operas.

There are seven segments in “Journey to the West” describing the great chaos created by the Monkey King. Born from a magic stone by the sea in the Aolai Kingdom, the character leads a carefree life with his furry brothers on an island. But in order to live happily ever after, he sets off one day to find an immortal tonic for himself and his tribe.

He meets mentor Puti Master in a Taoism temple, where he learns how to fly through the clouds and undertake the 72 earthly transformations.

With the magic skills mastered, the Monkey King ventures into the Dragon Palace at the bottom of the East Sea to seek a weapon from the Dragon King. He almost destroys the palace in seizing the jingu bang, or golden cudgel, which can be changed from a small needle to a big pillar reaching the heaven.

Then he breaks into hell where he cancels all the monkeys’ names on a death list there.

With the havoc he creates, the Dragon King and the King of Hell go to heaven and petition the Celestial Emperor to punish the monkey. But the God of the North Star suggests that the monkey be given a minor post in heaven so that he could be kept under close supervision.

The god then travels to the mountain where the monkey lives and tricks him by telling him he has been honored with a high-ranking post in heaven. In reality, the job is just a low-end task of tending the heavenly horses.

On the way to the heavenly Peach Banquet, the monkey overhears how he has been bamboozled and learns he has not been invited to the banquet.

Feeling humiliated and furious, the monkey disrupts the banquet with his magic powers. He eats all the peaches of immortality and drinks all the dinner wines.

The Celestial Emperor flies into a rage and sends a heavenly army of 100,000 soldiers to the mountain to do battle with the monkey and his well-trained monkey troops. 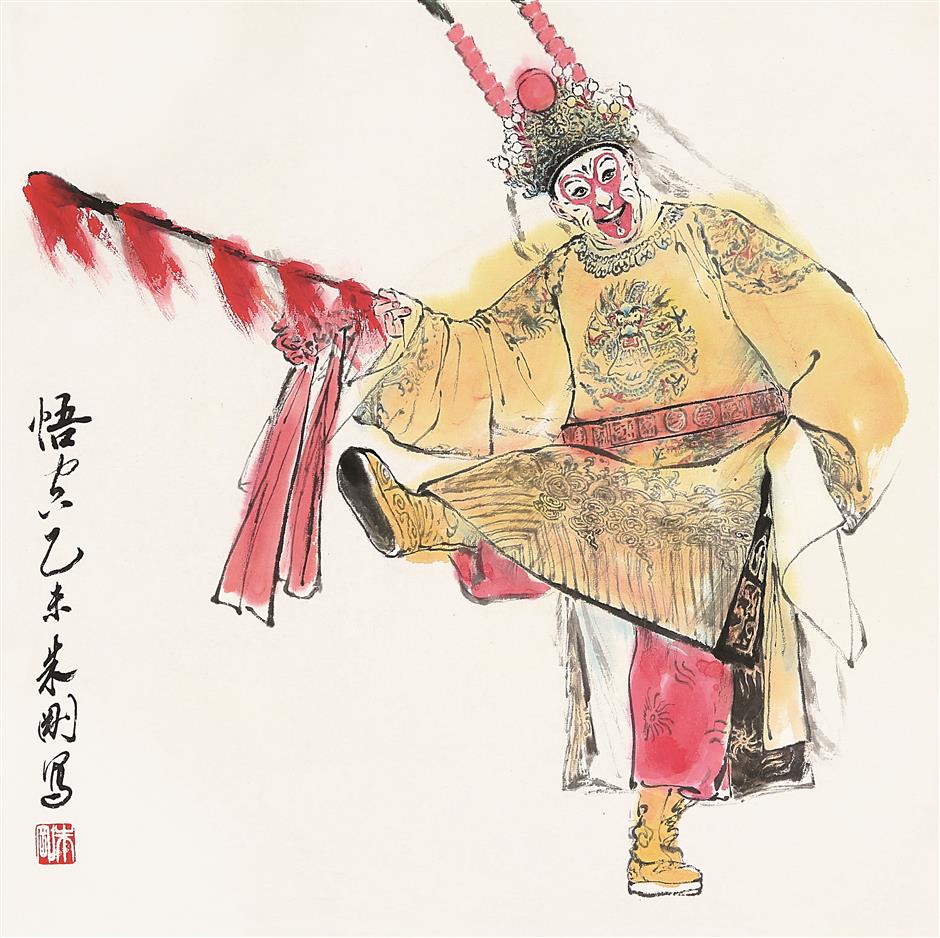 The painter Zhu depicts the freed, lively Monkey King with one raised leg. He tilts his head, and a mischievous look crosses his face. He might just have come from the banquet, drunken and pleased with what the havoc he caused.

‘Head of the Stables’

The God of the North Star lures the monkey to heaven by promising him a job as head of the stables, portraying that as a high-ranking duty.

The Monkey King accepts the job, but then sets the heavenly horses loose to roam freely. When the general of the Imperial Cavalry comes to the stables and finds all the horses gone, he shouts at the monkey, who then realizes the job is actually a minor one. He feels anger and humiliation. 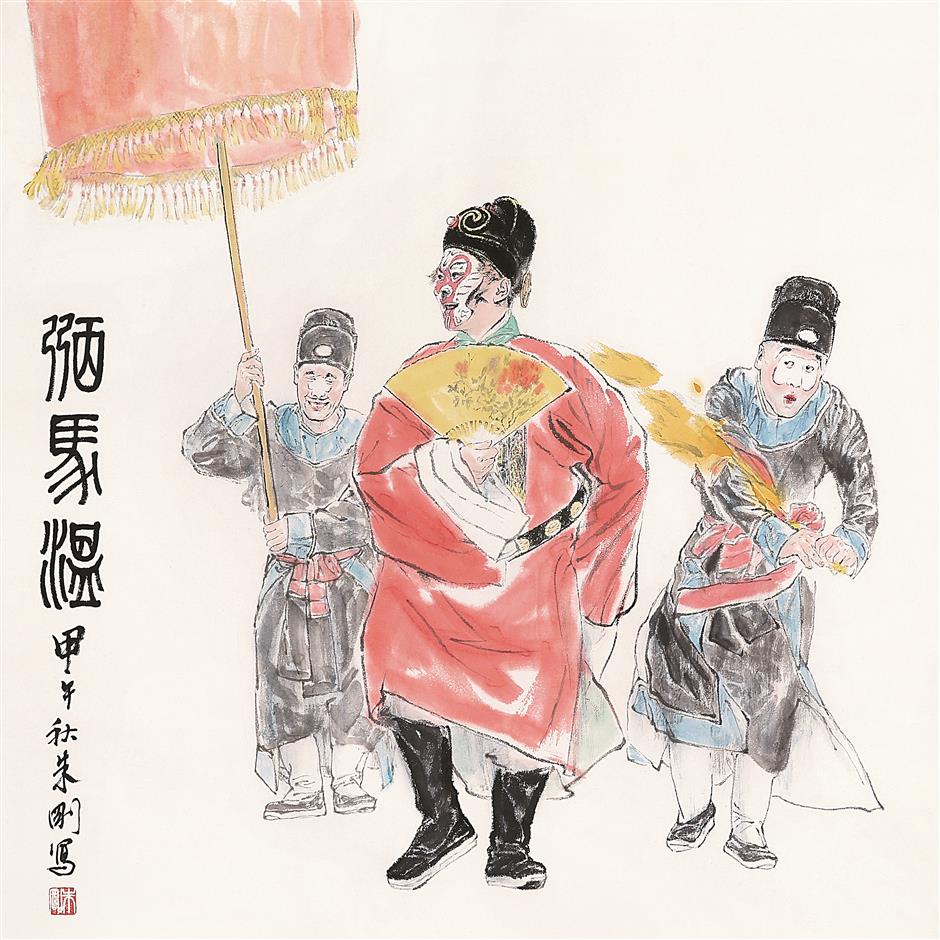 "Head of the Stables"

The Monkey King, under Zhu’s brushes, is dressed in a bright red robe as he goes to take on his new job as head of the stables. He is cocky and ignorant of how he was duped. He is almost smirking, in sharp contrast to his subsequent rage.

The monkey causes great havoc in heaven, and no one can catch him. The Celestial Emperor asks the Rulai Buddha for help. The Buddha extends his hand to Sun and says: “If you can jump out of my palm, I let you go.”

The monkey takes up the challenge. With his flying skills, Sun travels as far as his superfast speed takes him until he reaches the end of heaven, which is supported by five pillars. He urinates by one of the pillars to mark his presence.

Then he returns to the Buddha and tells him he has traveled to the border of heaven. With a big belly laugh, the Buddha turns his hand over and presses Sun under two celestial mountains for 500 years. The five pillars the monkey saw, in fact, are the Buddha’s five fingers.

One day, Guanyin Buddha visits the monkey, who has been imprisoned under the mountains for five centuries. She shows mercy and tells him he can come out if he agrees to guard Monk Xuanzang on a journey westward to Buddhist sutras.

Tamed and chastened, the monkey agrees and sets out on the journey. 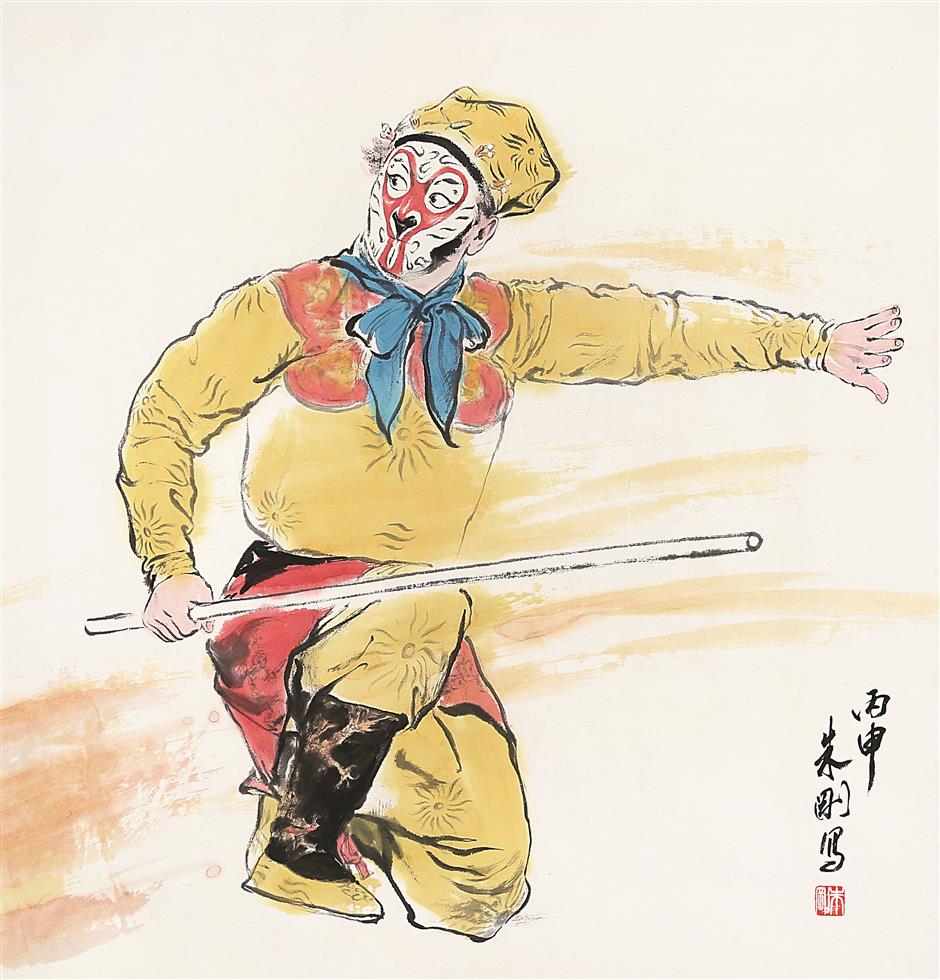 Zhu brings out the monkey’s inner character with his brush. He shows the Monkey King dressed in a yellow robe for battle and then staring into the distance with the golden cudgel in his hand. The monkey is fearless when confronting demons and ghosts along the route, showing a warrior’s determination to “sweep away all the devils in the world.”

The Monkey King and Monk Xuanzang reach Fire Mountain in what is today far northwestern China. Heated by an ever-burning fire, the place is dry, scorched and barren. The local God of Land tells the monkey and his companion that they have to borrow a fan from the Tieshan Princess to extinguish the fire if they want to pass through.

Due to some misunderstanding, the princess refuses to lend them the fan. The monkey then mutates into an insect and sneaks into the princess through the tea she is drinking. His presence in her stomach causes her great distress, and she finally agrees to lend him the fan. 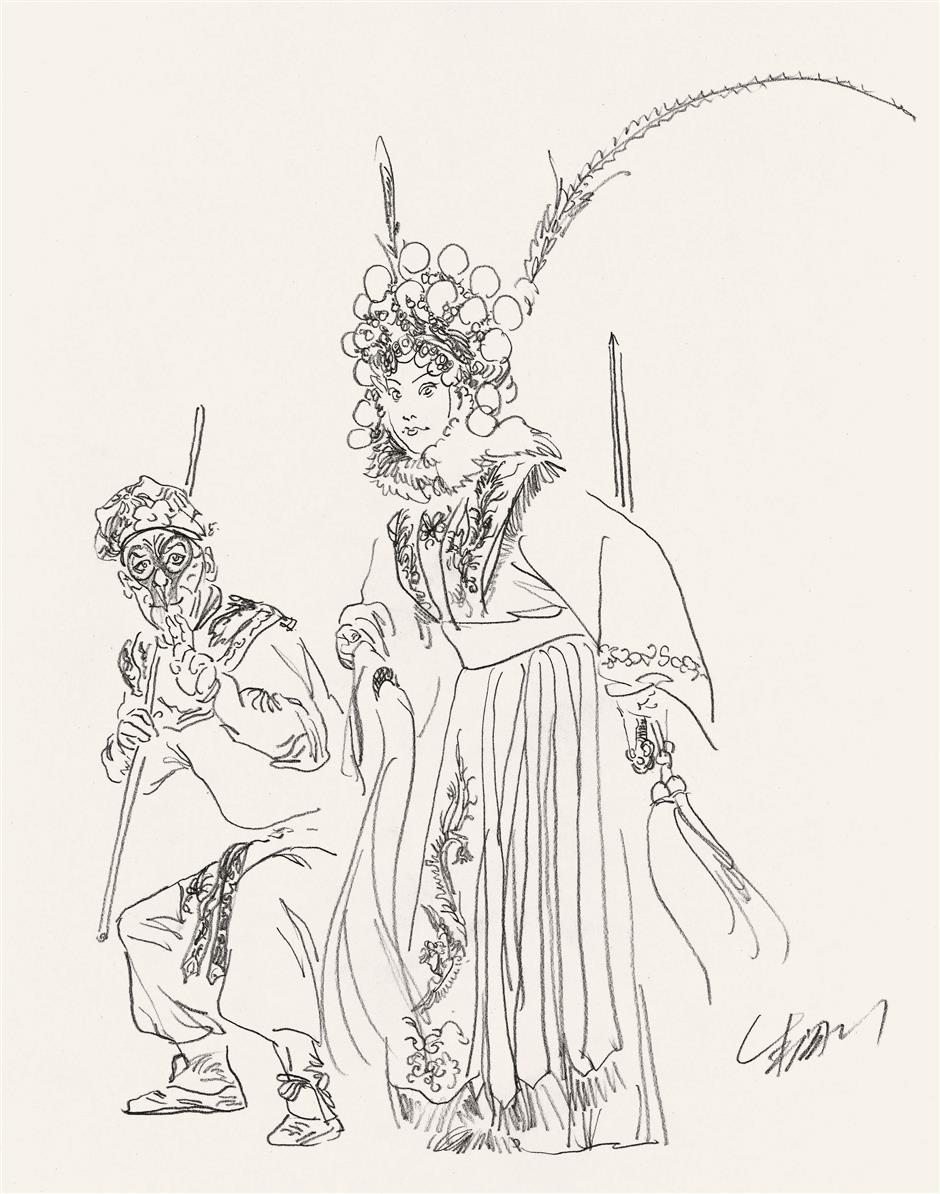 Zhu’s sketch on the incident captures the different features of the two characters. The cunning monkey is drawn with a sharp mouth, big eyes and thin cheeks, while the princess, holding a sword, looks indifferent and a little angry.