China’s achievements in poverty reduction have been incredible — especially in face of the coronavirus pandemic challenge — thanks to no small part to government intervention and innovators such as Li Fujun.

Born on a farm in Shandong Province, Li came to Shanghai to study at the Shanghai University of International Business and Economics. After graduation, he started a small trading company in hardware business. In 2013, at the age of 36, he had an idea to switch to farm products from the rural areas.

Since the company’s inception, it has created nearly 100 poverty alleviation products in about 15 counties across the country — including Honghe County in southwest China’s Yunnan Province.

On a visit to Honghe County, the agricultural trader was moved by the picturesque Samaba Rice Terrace Fields — the largest linked pieces of terraces in the world. The Hani people, one of China’s 55 ethnic minority groups, have grown the red rice for more than 1,300 years. And Li thought it a good food to be put on the dining tables of Shanghai, more than 2,000 kilometers away.

Now, he has done it. 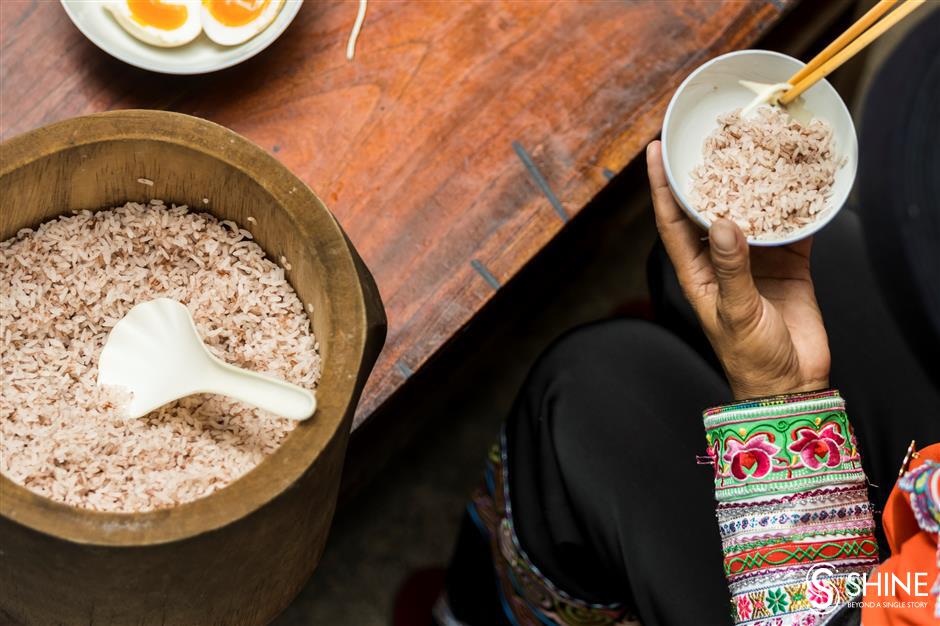 Red rice is a staple for Hani people in Honghe County, Yunnan Province.

“It’s not easy to reach the fields at an altitude of about 1,800 meters,” said Li, after a flight from Shanghai to Kunming City in Yunnan Province, plus an eight-hour drive through a winding road up the Ailao Mountains.

“My idea was to introduce a plateau specialty from the western mountainous area to the eastern coastal cities,” Li said, adding he also wanted to increase the income of local farmers so they could live a naturally sustainable life in these fields, helping to uphold the traditional knowledge, wisdom and cultural values of the community.

In June 2013, the Honghe Hani Rice Terraces was included on the World Cultural Heritage List.

Red rice is generally planted at an altitude between 1,400 and 1,800 meters. Its growth period is about 200 days, which is two months longer than rice from northeast China. With no pesticides and no chemical fertilizers, red rice is an ecological product, which can be planted only once a year. Compared with ordinary rice, red rice has a higher content of nutrients, such as trace elements, amino acids and protein.

Hani people accounts for 76.5 percent of Honghe County’s population of 340,600 and red rice, of course, is their main food crop.

Ma Minu is a typical Hani woman working in the terrace fields. Her husband works away from home all year round, while her three children study at school. She has a three-acre red rice paddy field to look after which yields nearly 300 kilograms each acre.

“I need someone to share this burden,” the 43-year-old said. 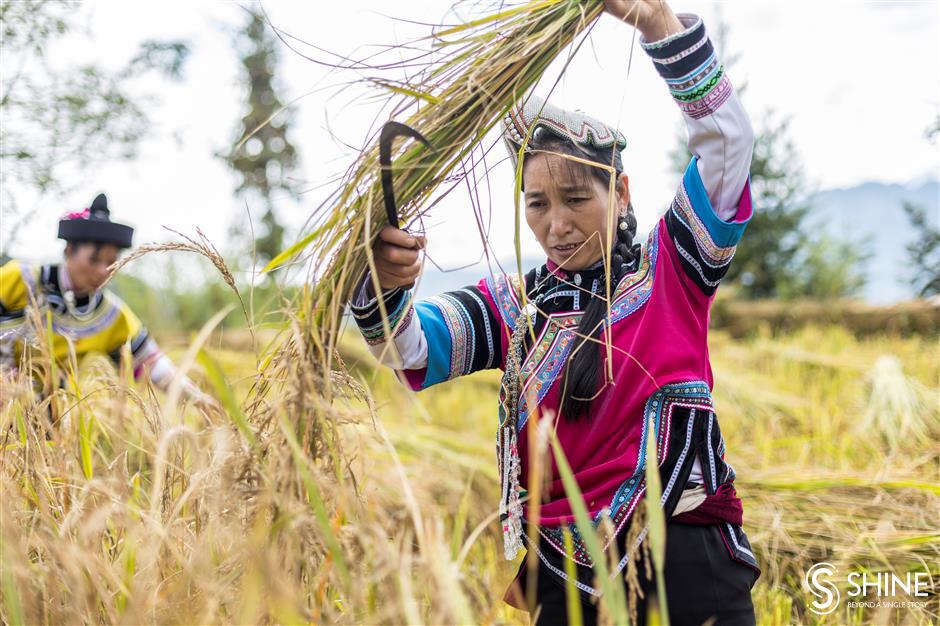 Ma Minu harvests red rice with a sickle in the field.

There are more than 13,100 women, like Ma, in Honghe County. To increase income, most people in their 20s and 30s leave home to study or work in cities, leaving only the elderly and women to cultivate terraced fields.

“If I do not improve the value of the Hani terraces, they will be deserted and we will have no world heritage,” said Yang Jianwen, the founder of a local red rice production and processing enterprise.

Yang also had worked away from the families for over 10 years before he returned to his hometown and started the company.

Yang has hired hands from more than 1,270 households to work on their fields and increased their income by purchasing the red rice from them.

He Ying is another who returned home to work. She is boss of the Sama Sunshine Hotel and Inn. She returned to her hometown in 2016 to start selling red rice and other sideline products in the inn.

“I’m proud of being a Hani ethnic. The terrace fields have been passed down to us by our ancestors for generations,” said the 26-year-old innkeeper. “In my shop, terraced red rice is a must buy for tourists and a very popular food on the table.”

She also sells red rice and the sideline products on Taobao, Weidian and other online platforms.

Even so, it’s still not enough. 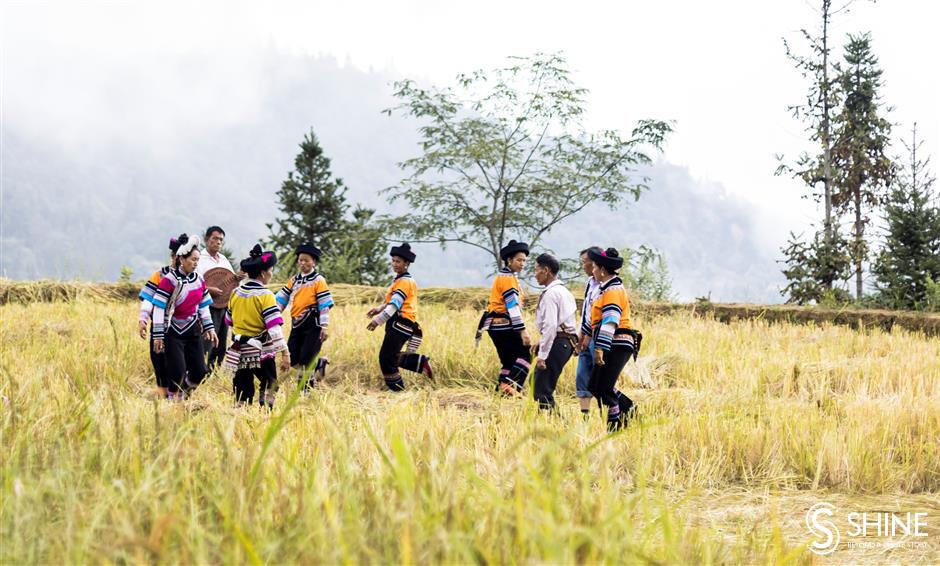 Hani people sing and dance in the terraced paddy fields, a harvesting ritual performed to this day.

Deputy director of the Honghe County Poverty Alleviation Office Wei Wei believes that “the local people in Honghe are very hardworking and Honghe has many good things.” To lift people from poverty, they need platforms and to learn how to promote their produce.

Li Fujun and his colleagues have worked hard on transportation and branding issues to promote red rice.

“Planned planting and production will not cause a waste of land resources,” said Li, who revealed that they have 1,300 acres of fields dedicated to the growth of Hani red rice that would, under contractual arrangement, be sold to target customers.

Pinduoduo, the largest agriculture-focused technology platform in China, is on board, as is Shanghai’s Changning District, which has opened six offline sales stores. They conducted five live online broadcasts, which attracted over 1 million people online, generating sales of more than 1 million yuan (US$154,700).

“I feel everyone has more interest and confidence in planting now. Moreover, their enthusiasm is higher,” Yang said. “Especially those who plant red rice, the value of which has increased by more than 100 percent on the original basis.”

Li and his team have increased the income of more than 1,000 registered poor households through planting red rice. In 2017, Honghe County had nearly 18,000 households with 81,000 of them registered as living under the poverty line. They were all lifted out of poverty at the end of last year.

But that’s not all. Li is still looking for new ways to improve the lives of rural folk by using modern technology and cooperating with Shanghai scientific research institutions, to turn primary agricultural products into refined products, such as extracting the nutrients of red rice. In the future, there may be high-tech products such as red rice facial masks and red rice meal replacements.

Li also wants to take children living in cities to the terraced fields, letting them see how red rice is grown.

“Then they will be able to experience the meaning of ‘do not waste every grain of rice,’” said Li.