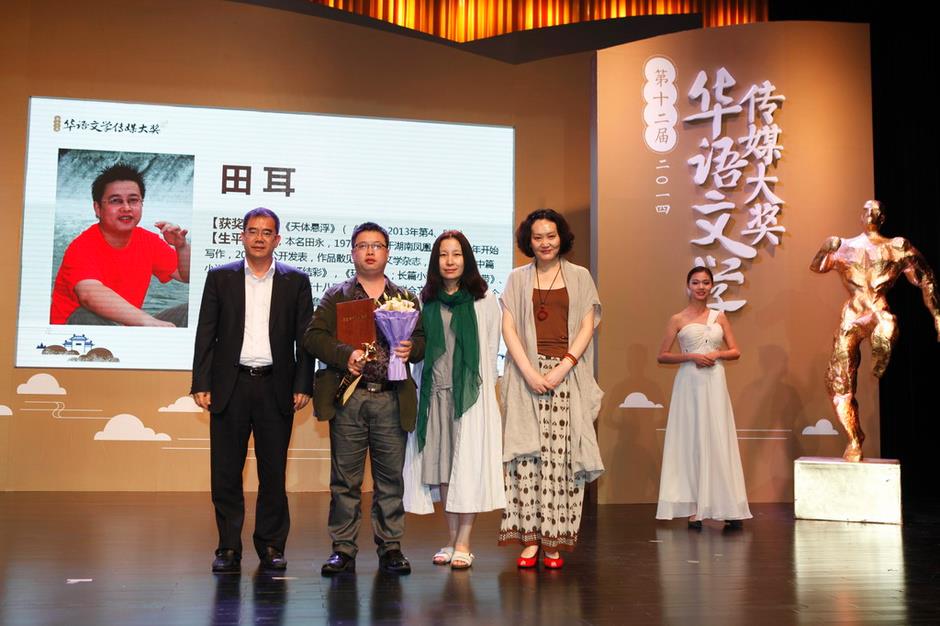 Tian Er (second from left), best known for his novellas, has won all the top literary prizes in this category in China.

ONE evening a restless Tian Er wondered whether a dead corpse had been in his bed. At the time he was staying at a writing camp in Shanghai’s suburban Qingpu District, which was once used as a home for the elderly.

“Someone must have died here, naturally,” he thought to himself. It was an idea that provided the inspiration for a book.

He thought of a plot: The elderly residents would pass the time of day by betting on who would be the next one to die in the home. One old man in particular was frighteningly accurate in his death forecasts. His bets were always correct.

Frightened, all of the elderly in the home then try to appease him with money or favors so he won’t bet on them. And then a power struggle began.

“A magician wearing a mask who tells thrilling stories,” said one judge at a recent literary prize award winning ceremony. It echoes the comments given to Tian when he became the youngest writer to get Lu Xun Literary Prize in 2007, at the age of 31. Awarded every three years, it is China’s top literary prize for short stories and novellas.

“Nobody knew who I was,” Tian told Shanghai Daily. “I was selling air-conditioners not long before I got the Lu Xun literary prize. I wasn’t in the circle of writers. I was an outsider.”

Tian wanted to be a writer from the age of 10, in his hometown of Fenghuang in Hunan Province. The place is famed as the hometown of Shen Congwen, one of the most established contemporary writers in China.

After years of limited access to foreign culture, Chinese people read compulsively when literary works such as “One Hundred Years of Solitude” was translated and published in China for the first time in the 1980s and 1990s.

Many domestic writers, particularly those born in the 1950s and 1960s, finally had a stage for their long-awaited talents. A generation of Chinese writers reflected on what happened and looked for answers in the future.

Many born in the 1970s, like Tian, had aspirations to become writers.

“But we, writers born in the 1970s, were overlooked, compared with those born in the 1950s and 1960s who shot to domestic and international stardom,” the 42-year-old said nostalgically.

“It’s not because we are less talented. In every generation, you have some with more talent than others and some with less. It’s the overall atmosphere. When we started writing, that overall fever for literature was gone. The country has quickly shifted to focus on economy.

“Naturally, individuals started thinking more about how to make money than what’s the next book to read.”

For years he felt discouraged. Most of his friends and relatives didn’t think he was a good writer. He also got little feedback from editors.

“Well, I could always go back to selling air-conditioners again. But I am lucky I don’t have to,” Tian said. “There were times when I wasn’t sure whether I was a good writer. But I was always confident I could tell a good story.”

He was reassured when working as a manager in an air-conditioner shop.

The shop is very busy in summer and quiet for the rest of the year. Shop assistants easily get bored. To keep them engaged, Tian started making up stories about people passing the shops.

“That’s a complete misunderstanding. But it’s also true that many serious Chinese writers don’t know how to tell a good story. So now, even fewer people are reading serious literature, unlike when I was young.”

Years later, Tian turned those thoughts into a novella: “The Person Who Was Guessed Dead,” an absurdly realistic tale with a strange tone of humor that takes place in an elderly home.