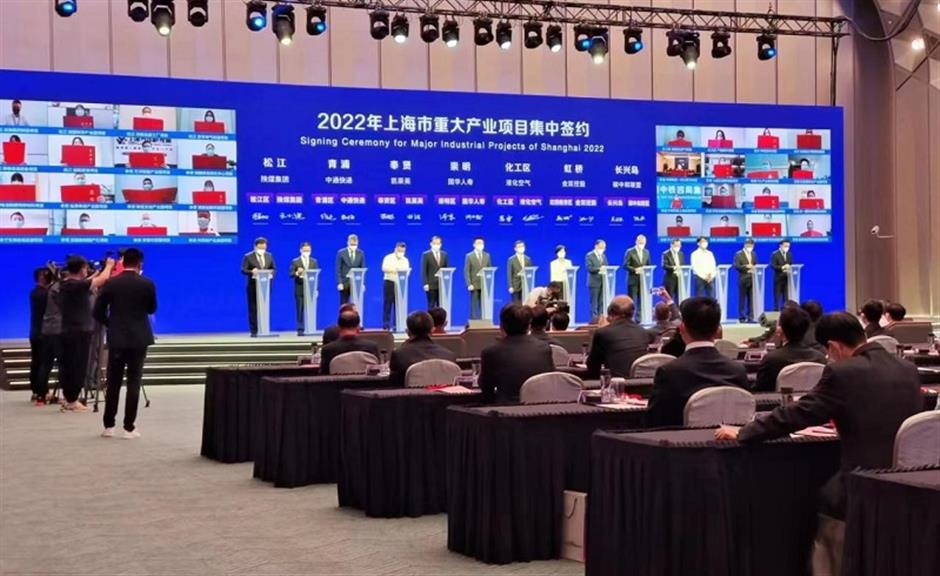 The signing ceremony for major industrial projects of Shanghai 2022

Agreements on 25 projects were inked by the Songjiang District government during the Shanghai Global Investment Promotion Conference on June 16.

The projects, with a total investment of 26.5 billion yuan (US$3.96 billion), show a mutual trust between the suburban district with its G60 High-tech Corridor vision and various companies.

The project, to be constructed in three phases and occupy a land area of 169.73 mu (11.31 hectares), will include a headquarters building, a research and development platform and a sci-tech fruit transformation platform. Its research and production will be in the field of high-end chemicals, new materials, new energy, smart equipment and life health.

Construction of five other projects, with an investment of 2 billion yuan, also kicked off during the conference.

In addition, the Songjiang G60 information technology industrial base was named among the third batch of 13 industrial parks with unique elements declared at the conference.

﻿
Special Reports
﻿
61771
,
Songjiang signs agreements on 25 projects at investment meet
Phase Two of Rafael Sky City now in full swing
5,000 vie for 40 reserve talent placements
The good and the bad for business owners
It's hot out there, so hit the water at InterContinental Shanghai Wonderland!
The perfect season for tasty yellow crabs
Disability no hurdle for this Songjiang athlete
A showcase of Song splendors in Songjiang District
Enjoy blooms and farm fun in Songjiang parks
Revolutionary hero transformed electronics
EXPLORE SHINE