The coronavirus pandemic may have stopped several foreign theater troupes coming to China but domestic plays at local theaters are on the rise.

Staggered training and rehearsal started at the Shanghai Acrobatic Troupe in March. The acrobatic performers, wearing face masks, are working on two artistic shows, the “Battle of Shanghai” and the multimedia spectacular “Era 2.”

The original acrobatic play, “Battle of Shanghai,” tells a touching story of soldiers who fought for Shanghai’s liberation in 1949. Stunning acts filled with diverse elements of acrobatics, magic, dance and traditional Chinese theater are featured in the play.

It turned out to be a big success when it debuted at last year’s China Shanghai International Arts Festival. The troupe is now preparing to take it on a more condensed and appealing show for a national tour.

Yu Yigang, director of the Shanghai Acrobatic Troupe, revealed the troupe has already received invitations from a dozen of provinces and cities around the country. He attributes the play’s popularity down to its cultural and historical charm, as well as having a good balance of story and acrobatic choreography.

“It has been more than 20 years since our troupe went on a national tour,” Yu said. “We aim to break people’s stereotypes about acrobatics with superb storytelling, multimedia methods and impelling scenes on stage.”

At the same time, the resident show “Era” will begin its second season with new acts and choreography.

Since its debut at Shanghai Circus World in September 2005, the daily-running show has been hailed by both domestic and foreign audiences for a creative blend of traditional Chinese acrobatics and Western entertainment. The show has become a remarkable cultural and tourist must-see spectacle.

Yu says that two-thirds of the show’s acts will be newly designed and created. But the new season will keep its international interpretation of Chinese culture, art and stories.

The troupe’s directing team is having online discussions with a French team about certain details about the show’s scenes, music, costumes and choreography. Some popular acts in the first season will be retained with a new look.

On average the Shanghai Acrobatic Troupe presents around 1,000 performances every year. But due to the coronavirus pandemic, the troupe had to cancel more than 400 performances in the first half of this year.

“Now our directors and performers have more time to create and practise new acts,” said Yu. “The epidemic has also changed our traditional way of marketing.”

Yu was surprised and excited to see that the troupe performers’ short videos were so well-received on the Internet. 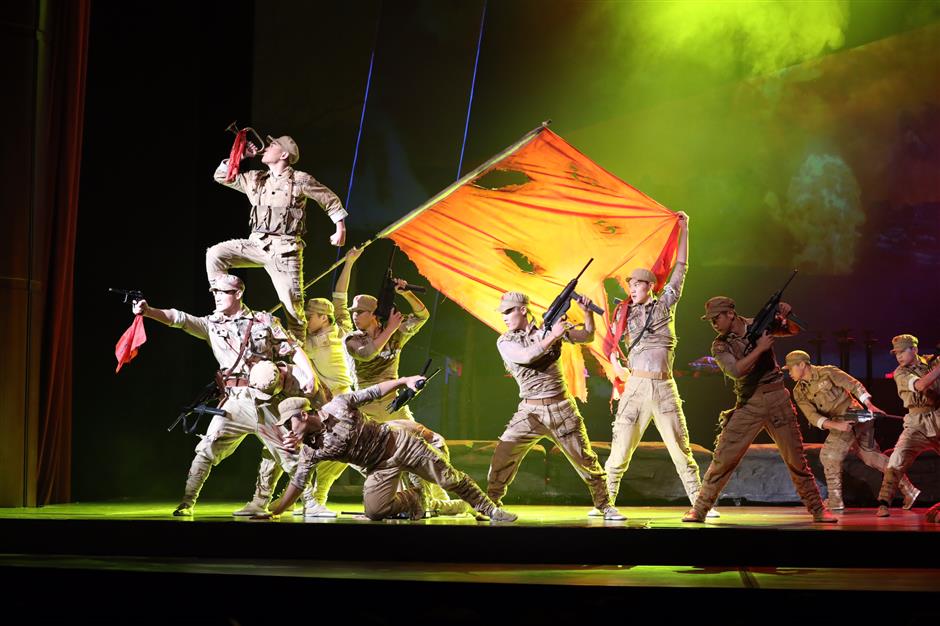 Stage scenes from the original acrobatic play “Battle of Shanghai”

Qiu Dawei, on of the troupe’s performers, recently uploaded several short videos of her acrobatic training, like the “Russia Bar” and “Silk Ribbon Hanging in the Air.” Every video received tens of thousands of thumbs-up on Douyin, the Chinese version of TikTok.

The 28-year-old performer, who started to learn acrobatics at the age of 13, said the popularity of the exercises, especially among young Netizens, went way beyond her expectations.

“Acrobatics is about extraordinary human feats of balance, agility, and motor coordination. It is never less than entertaining, and mostly it’s wonderfully so,” Qiu said. “I feel honored and fulfilled to help promote the charm of acrobatics to the young generations.”