An architect's vision of autumn

Marshall Strabala, chief architect of the Shanghai Tower, features in a short film that’s part of the “Shanghai, Through the Seasons” series.

The films showcase the seasons through the memories of various professionals.

The short film, the second chapter in the series, depicts the most impressive autumn scenery of Shanghai in the architect’s mind.

“The autumn in Shanghai, it’s the greatest time of the year to take pictures of the building. It’s a softer light than spring, it lights up the whole of the city by the setting sun,” Strabala said.

“One of the first dishes I had when I came to Shanghai was hongshaorou (pork braised in soy sauce), and I still think that’s one of my favorites. I love xiaolongbao (steamed bun) and hairy crab. The food of autumn in Shanghai is unbelievable,” he added.

Follow iDEALShanghai reporters to explore the places in front of the camera and the stories behind the filming.

Fuxing Park on Yandang Road is one of the best places to enjoy the colors of autumn.

Designed by Papot, a French horticulturalist in 1909, the park maintains the French classic style, which is characterized by plaids and patterns. The construction of Fuxing Park combines French and Chinese layout styles. The north and central parts of the park focus on the French style and includes a carpet flower bed, central fountain pool and China rose flower bed. The southwest part of the park presents the Chinese style and includes a rockery, lotus pond, stream, winding path and lawn.

Plane trees grow throughout Fuxing Park, with over 1,700 of them said to be over 50 years old. Stepping in the gate on Yandang Road, the small road is flanked by tall plane trees. This week, they reached peak foliage season, presenting a great golden scene.

Among the trees, one beside the south gate is the most famous, and is called “Shanghai No. 2” for its huge trunk.

There are some other famous trees, such as a European horse chestnut which is rare in Shanghai. Conkers appear and fall to the ground as they ripen in autumn. The last plant to change hue is the red maple, and the best time to appreciate it is late November and early December.

Fuxing Park is famous for its huge central lawn. A tai chi class for foreigners is held there every week, and Strabala took part in it during filming.

It’s a great place for both residents and visitors to enjoy autumn. 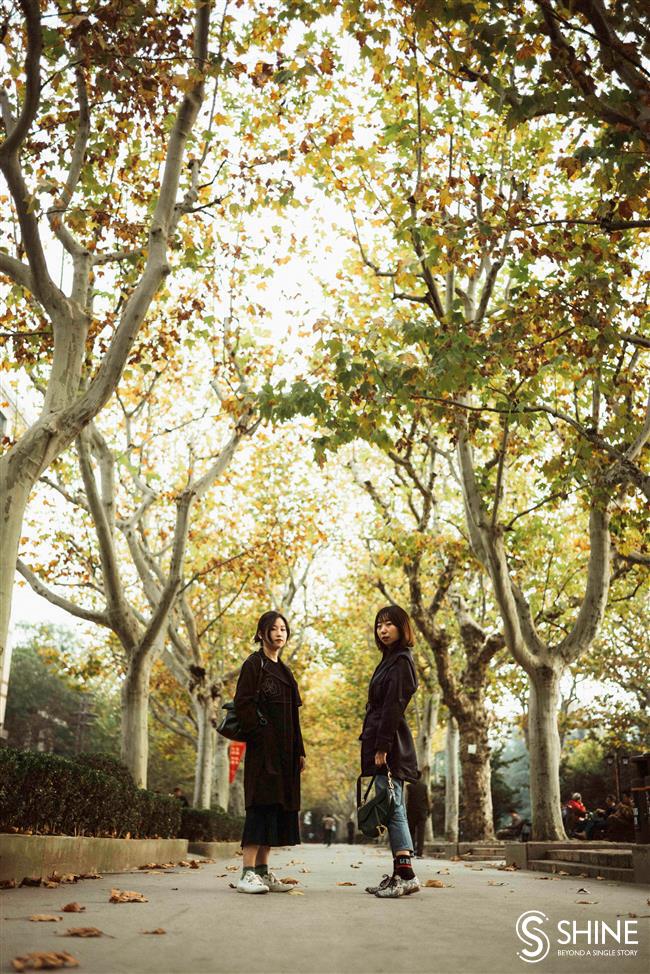 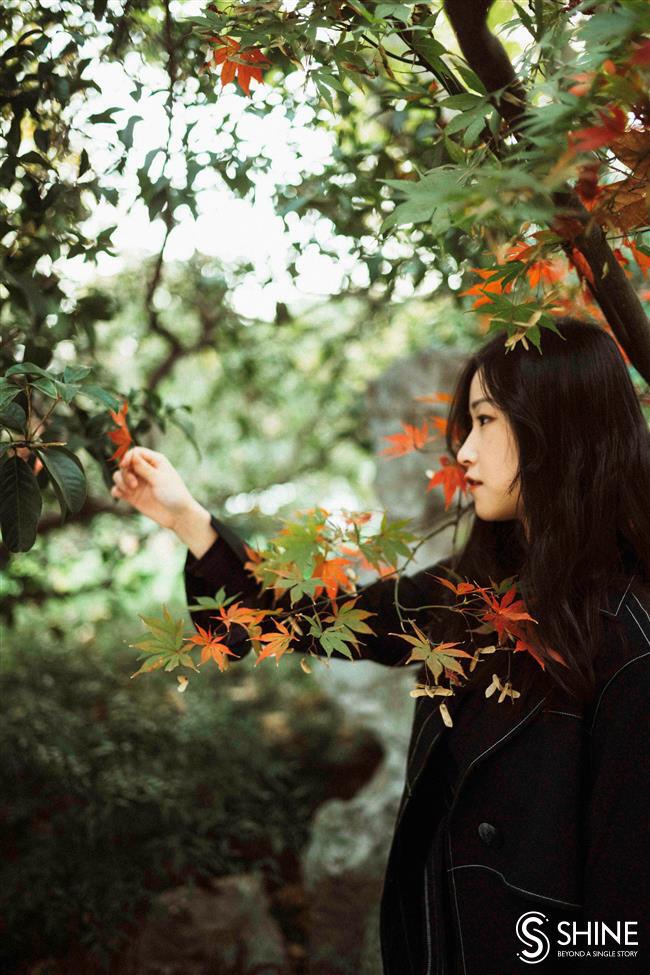 Shirlene Gu with the red maple in Fuxing Park

A toddler passes as reporters enjoy the autumn hue. 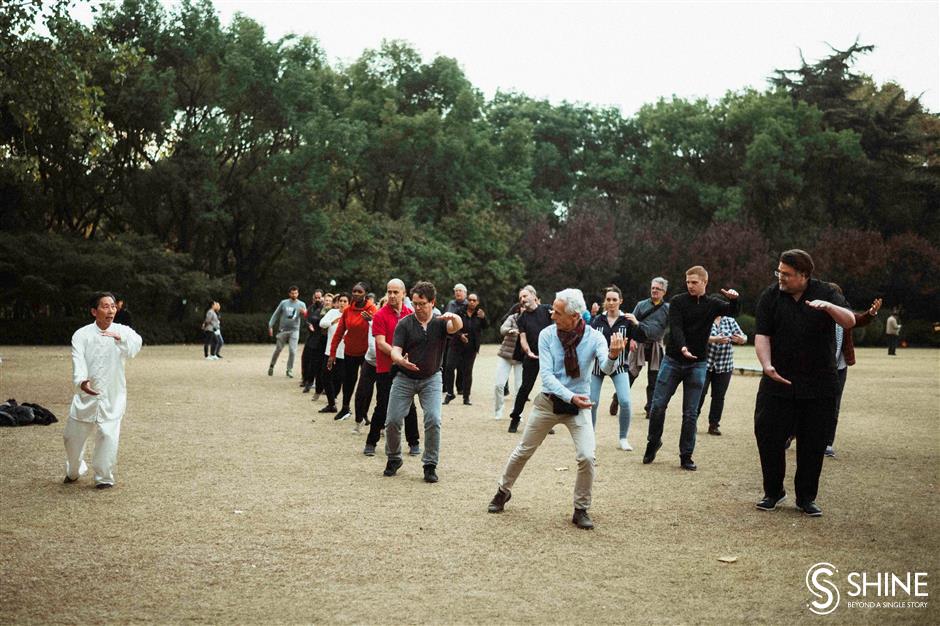 A cup of hot tea is the perfect choice in a cold autumn, especially Pu’er, the famous fermented tea produced in China’s Yunnan Province.

In the autumn chapter of the series, one of the settings was the Dak Town Pu’er Teahouse on Xiangyang Road S. Specializing in Pu’er tea, it is not only famous for its rich collection of tea, but also the historical building.

Built in 1933, the three-story villa hidden in an alley has a garden with a magnolia tree older than the house. It has an asymmetrical layout, with a porch downstairs and a tower facing the garden. Decorated with a belt line, a stone-like surface, a brown brick surface and a geometric facade, the Art Deco decoration creates a unique architectural style which existed in Shanghai in the 1930s.

It was originally an official residence, and was once a kindergarten. Then it became the office building of Shanghai Burlesque Troupe.

The teahouse provides old teas from the 1970s to the 1990s, the most recommended being Chitse Beeng tea , which was a famous kind of Pu’er produced in the Menghai Tea Factory from the late 1960s.

In the film “Shanghai in Autumn,” the Dak Town teahouse was transformed into Strabala’s studio. 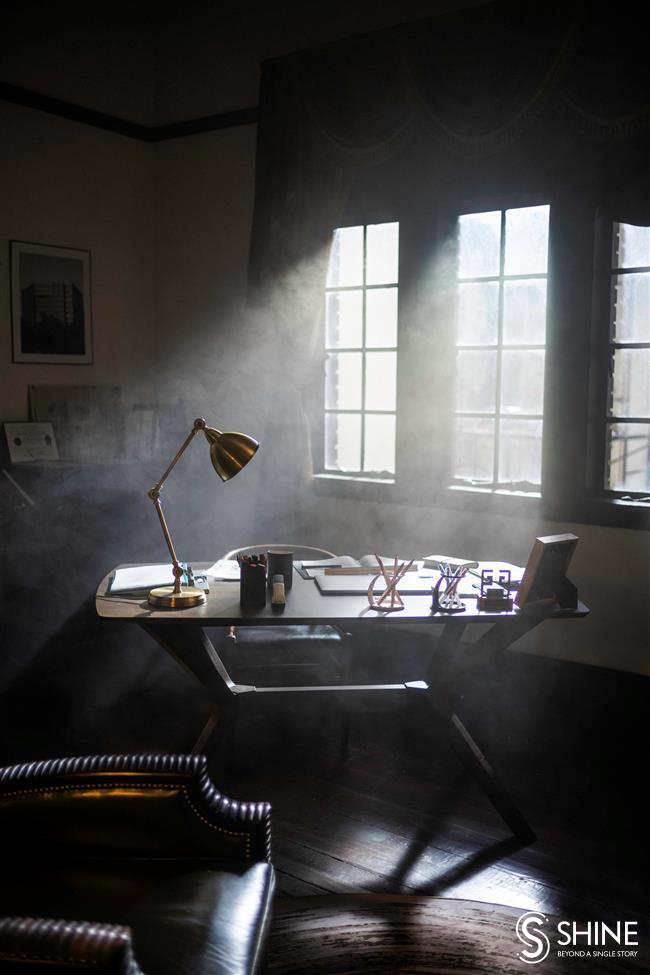 An office desk inside the antique villa 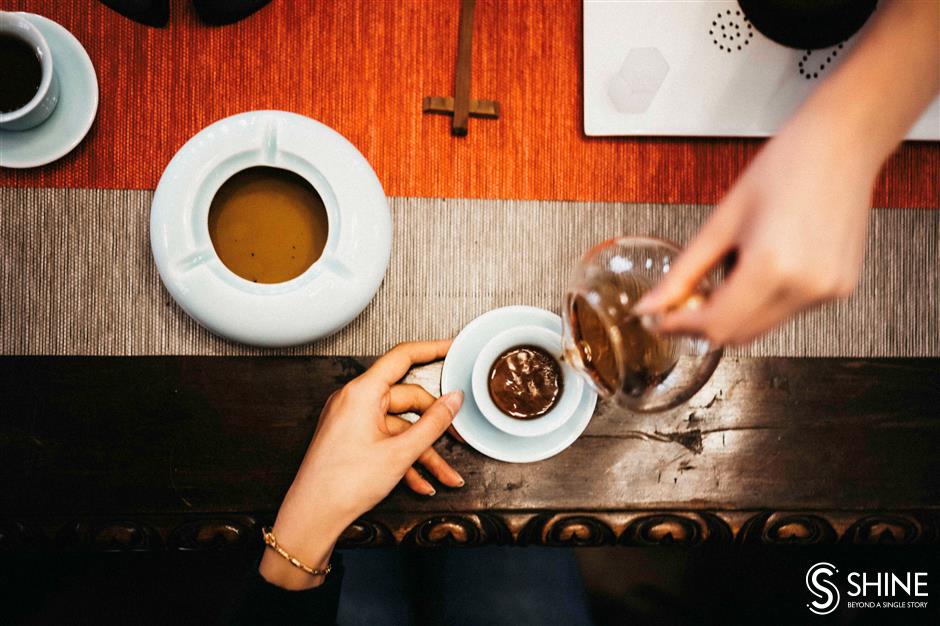 A lady makes a cup of tea.

Golden plane trees and fallen leaves are features of the autumn in Shanghai.

With exquisite houses and tall plane trees edge on both sides of the road, Sinan Road has more than 20 old Shanghai-style garden houses which make it a unique attraction.

In this season, fallen leaves were left on 42 streets in 12 districts to create a colorful seasonal spectacle. Sinan Road was one of them.

The part of Sinan Road that Strabala chose to take pictures in the film was the section beside Sinan Mansions, in which there are 51 historic villas. They also bring together a variety of architectural styles.

The autumn scenery on this road attracts lots of visitors and photographers.

The setting sun shines through the golden tall plane trees, the dappled light and shadows lend themselves to perfect photographs of the historical buildings. 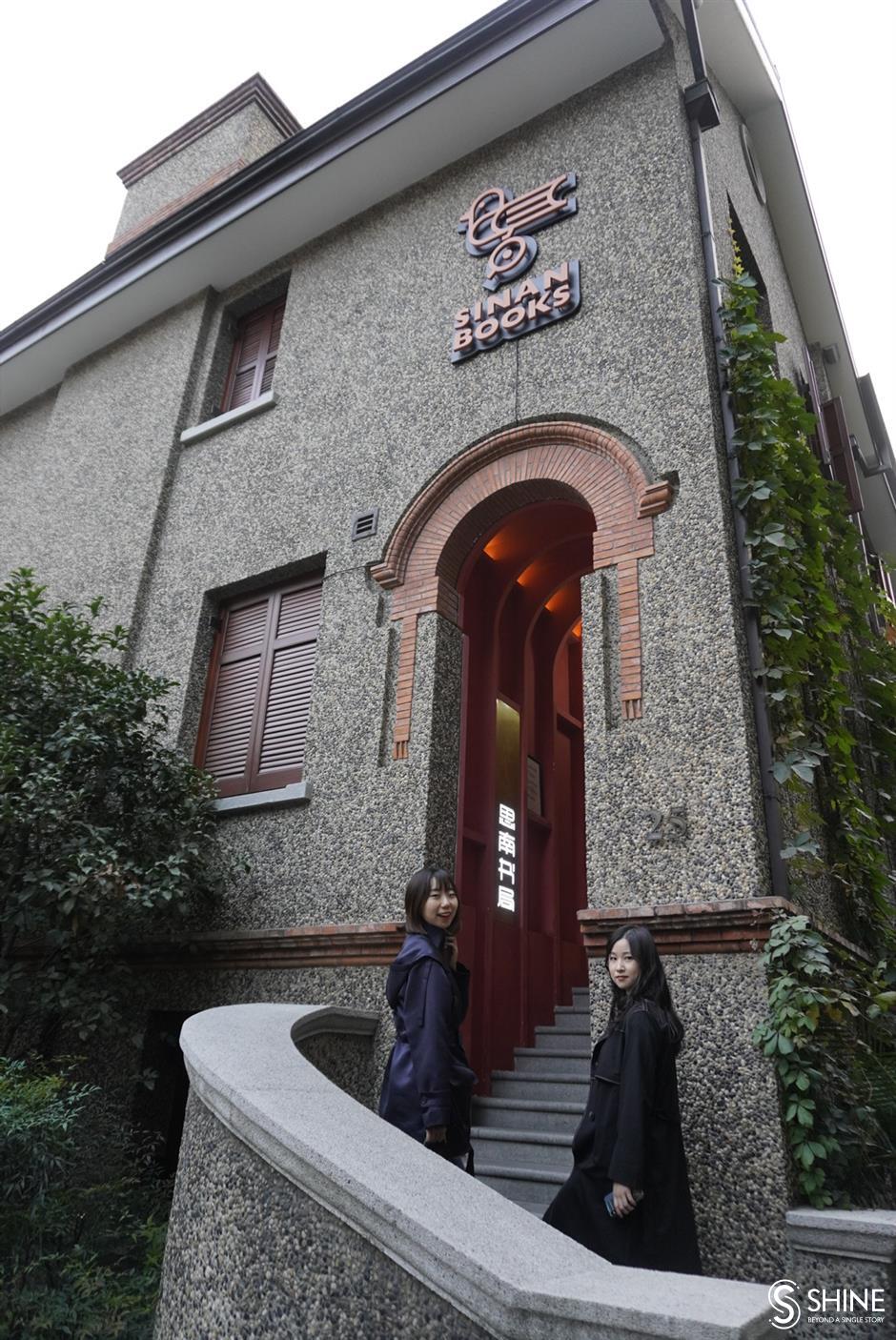