End of an era: a swan song for pioneer pedaling project

Raymond Pei, who has lived in Minhang District for half of his life, is planning a bicycle trip as a final lap, of sorts, in the decadelong public bike-rental program that winds up by the end of May.

Pei, 30, was among the program’s earliest users. When it started, he was a junior college student studying in Fengxian District. Every weekend, he took a long-distance bus back to the Minhang station, which was about 20 minutes’ walk from his home.

“At that time, people called it ‘the last kilometer,’ which referred to the distance between home and a Metro or bus station,” Pei says. “Without the rental bikes, I would have had to walk or, if the weather were bad, take a taxi.”

Minhang was a Shanghai pioneer in rental bikes, devising and implementing an innovative idea long before commercial bike-sharing companies came along and flooded the market with two-wheel transit.

Started from 2009, the district program was conceived as a way of filling the blanks of public transport and even helping reduce the number of cars on the road.

At the time, some people nostalgically mused about a return to the city’s past, when bicycles, not cars, dominated the roadways.

Pei still remembers the early days, when the Minhang program was free and utilized an “honesty card” that could be flashed to unlock the bikes from their parking poles. Users were required to return the bikes to the poles, and a deposit sum was registered on the card.

The program’s bright green bikes looked distinctively different from other bicycles on the street, raising the profile of an innovative idea that attracted quite a following.

“At that time, such a service was a brand-new concept for us, and everyone was talking about it,” he says. “We talked about how to obtain the ‘honesty card’ and wondered how long such a free public service could last.” 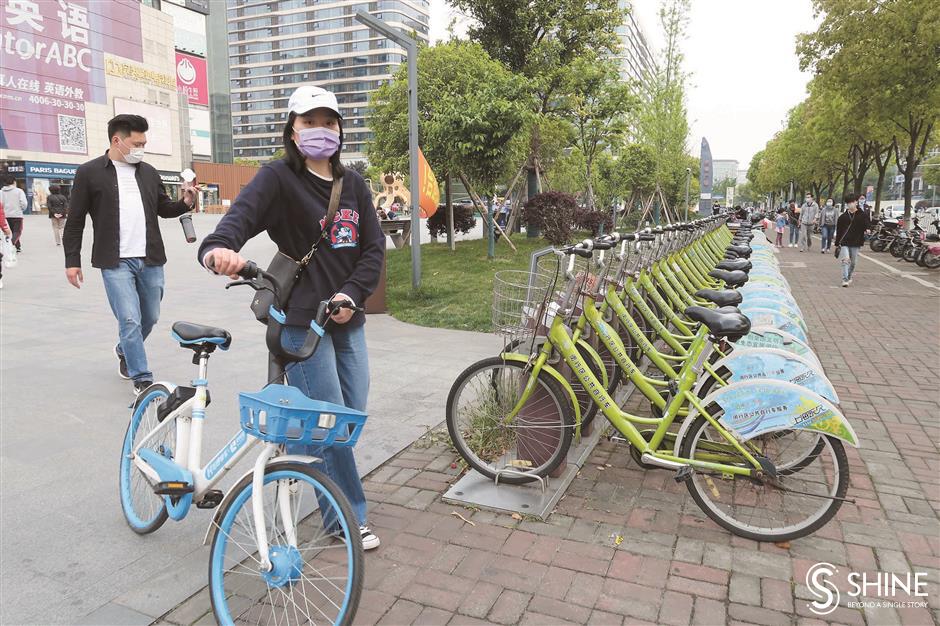 A shared-bike user passes a row of Minhang District’s public rental bikes. The decadelong service terminates by the end of next month.

The program endured because of strong public support and the participation of the 80-year-old Forever Bicycle Co.

The company, with government subsidies, has been responsible for providing the bikes, arranging parking places and doing general repair and maintenance.

For Pei, the free bike-rental program produced bittersweet memories. He recalls how he met his first girlfriend in 2010 and they often rode the bikes on dates.

“After each date we took the bikes home, hoping to prolong the evening as long as possible,” he recalls. “We talked and laughed as we rode, often disturbed by our parents’ angry phone calls telling us it was late and we should already be home.”

The relationship didn’t last. About half a year later, Pei and his girlfriend broke up, and he has never ridden rental bikes with anyone else since.

Just like Pei’s love story, the rental bike service itself hasn’t been all roses and rainbows.

According to Minhang data for the first four years of the program, more than 230,000 “honesty cards” were issued but only about 10 percent were activated. Only half of the available bikes, or some 20,000 bikes, actually wheeled down streets. Nearly 1,000 bikes went missing.

Therefore, in 2013, new rules were announced. Users henceforth needed to pay an annual fee of 10 yuan (US$1.40) plus a deposit. The “honesty card” was replaced by a bank card issued by the Agricultural Bank of China.

The bikes were still free for up to one hour’s usage. After that users were charged 1 yuan per hour, up to a limit of 5 yuan a day.

“I do remember the change, but at that time, I was using the rental bikes less,” Pei says. “I had graduated and found a job in downtown Shanghai. We had a car, and I either drove to work or my father drove me to the nearest Metro station.”

In recent years, as shared bikes boomed all over Shanghai — and China — as part of the “sharing economy,” the public service in Minhang lost its uniqueness. The yellow, blue and orange bikes operated by rental companies don’t require a bank card. Users can rent bikes with apps on mobile devices, and they could leave them at designated places at their destinations. No parking pole is needed anymore.

Although the commercial shared bikes aren’t as low cost as the Minhang program, they are more convenient.

“Usually, a shared bike costs 1.50 yuan for every 15 minutes, and sometimes I use them as well,” says Pei. “It is not expensive, and it’s much more convenient to use your smartphone to unlock the bikes rather than having to dig out a bank card all the time.”

In 2018, the Minhang program released an app called Forever Bike on mobile devices. Under the new plan, users needed to deposit 100 yuan in the app and they could unlock the bikes with their phones or tablets. No bank card was needed anymore.

However, data last year showed that usage of the Minhang program was still continuing to decline. Bike parking sites also decreased to 600 from 679 in 2018.

Minhang traffic authorities say the demise of the service is a “natural contract thing” and declined further comment. Users can get deposit refunds through the Forever Bike app.

“I plan to use the bike one last time before the program ends, maybe just to go to the supermarket or something,” Pei says. “It feels like an era is ending for residents in Minhang, and I guess that’s just the result of technological development.”

Special Reports
ADVERTISEMENT
End of an era: a swan song for pioneer pedaling project
The divine nature of giving palliative care
Dynamic couple's cool, collected, wide-open space
Experimenting in art, design and investing in an ecosystem
A trip to new cultural and creative park
Mall offers new ways to shop amid pandemic
Chopsticks: Eating habits under scrutiny
'So many memories!' The changing face of Shanghai's east bank
Lingerie and watches with a global twist
Medic on call: from terrorism to COVID-19
EXPLORE SHINE