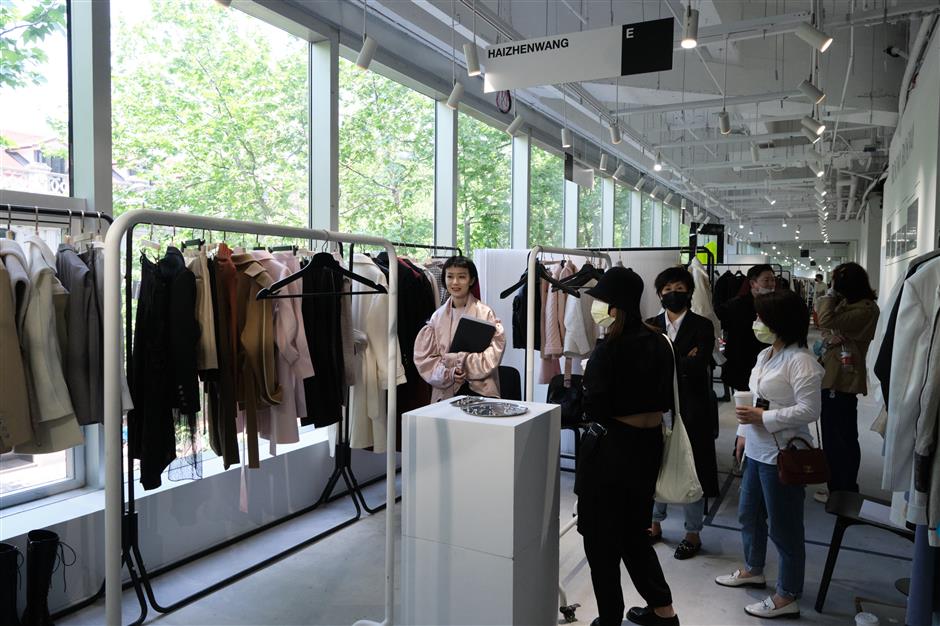 Ontimeshow fashion trade fair has reopened its offline showrooms as the industry grapples with difficult times.

With reduced size, a new location and screened entry, Ontimeshow, Asia's largest fashion trade fair, is back after a two-month closure with offline showrooms on Shanghai's Huaihai Road.

More than 80 fashion brands — including domestic names like Angel Chen, AlphaStyle, YES BY YESIR and CONCISE-WHITE — set up their showrooms in the newly opened TX Huaihai mall, a youth-oriented fashion center and curated retail marketplace.

Still, the global pandemic continues to leave its mark on the fair, with participating brands down from about 315 last year as most overseas labels without Chinese agencies are absent. The venue was also moved from the 25,000-square-meter West Bund, which has not reopened, to the smaller space.

“It’s a new challenge for us, but it also brings a new show experience for brands and buyers,” said Aroma Xie, co-founder of Ontimeshow. It’s the first time for the trade fair to be held in a retail shopping mall.

Under the gloom of the coronavirus, many independent designer brands are stuck in a desperate situation, where production cycles are badly affected, retail channels are blocked, inventories are piling up and the global travel ban makes fashion shows impossible. For those with their own stores, daily operating costs are hard to cover.

“We hope Ontimeshow can help designers and brands get through these hard times,” Xie said. The current fair is focused more on winter collections because of the compressed production cycle for autumn lines. The event's online store on Siku e-commerce mall is also helping brands and select shops sell their inventory. More shows and trade events are being considered for the second half of the year.

Another major difference from previous fairs, the co-founder noted, is that this year buyers have clearer purpose and are making more deals.

At the same time, Ontimeshow has launched its online trading platform based on data from the past five years. “As a matter of fact, the platform was already developed one year ago, not specially for the pandemic,” the co-founder said. “We accelerated last-stage testing and the entire system was launched one quarter ahead of schedule.”

The online trading platform, Ontime Order, can meet the demands of brands and buyers who request personalized features and services by assessing their needs and matching them with the trade fair’s resources.

“It’s not meant to replace offline showrooms. It’s to make the entire B2B ordering process more efficient and data-based. We still have an overall arrangement. At present this system is just part of the blueprint,” the co-founder said.