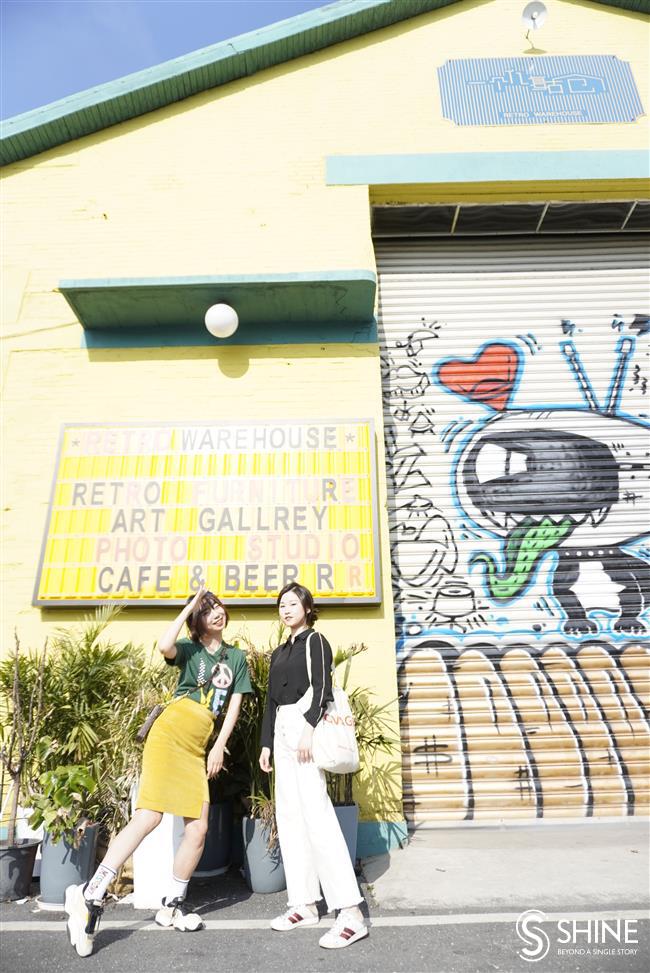 Fiona Li (left) and Shirlene Gu pose in front of a renovated warehouse which is now the One Hundred Million Retro Warehouse store.

A creative park in Minhang District has gone viral on social media thanks to a photo which looks like it was taken in Havana. The old warehouses in the park are painted in lemon yellow, pink and blue, adding a touch of Cuban flavor. Several 1960s-era cars in the parking lot in front of the colorful warehouses attract a flood of vintage lovers.

Follow iDEALShanghai to take a little adventure to explore the place in the iconic photo.

The old warehouses in the creative park used to be outdated and dusty, until a vintage furniture store, One Hundred Million Retro Warehouse, opened in one of them.

“When I rented the warehouse a year ago, the white paint of the outside wall had peeled off, so I decided to paint it in a new color. I chose lemon yellow, and drew lines in different colors on the eaves and door frames. Later, the management committee of the park saw my renovation and invited me to design the colors for the other buildings,” Double, the owner of One Hundred Million Retro Warehouse, told iDEALShanghai.

“I made use of some lines of the original structures and designed the current three groups of colors. However, I hope to keep the original style of the buildings, so I retained the red brick walls of the two buildings on the left,” Double added.

After Double’s renovation, the park has gradually became a hot attraction.

The vintage furniture warehouse itself, integrating art and installation, made it a great place to have a tour.

One Hundred Million Retro Warehouse features mid-century modern pieces. Over 70 percent of them are iconic chairs and sofas from the United States, France, Germany, Italy, Spain and Nordic countries. 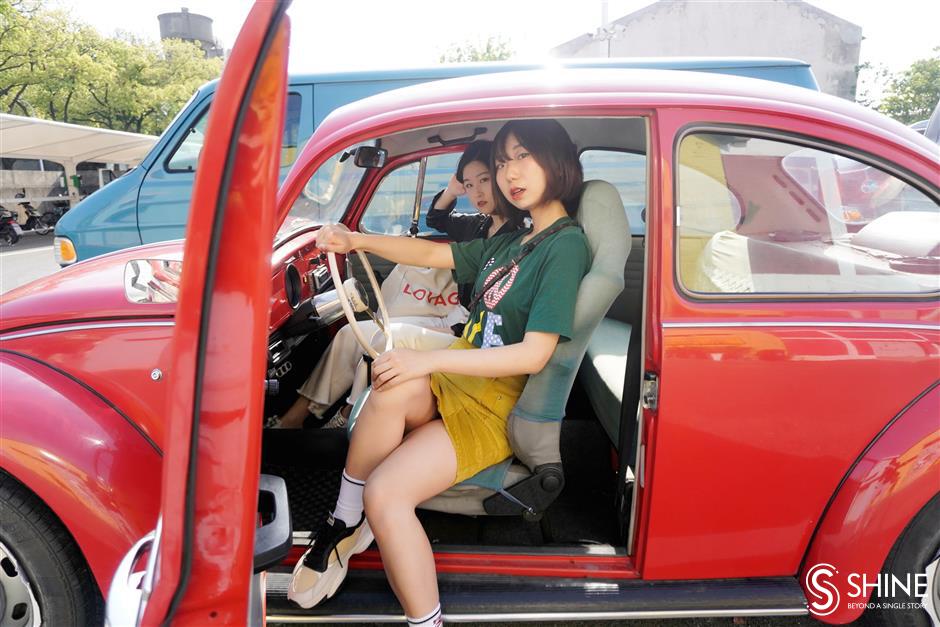 Fiona Li and Shirlene Gu sit inside an antique car. Double, owner of One Hundred Million Retro Warehouse, has filled the warehouse with his collections of antique cars over the past few years.

As an antique car lover, Double was attracted by furniture from the same era of the cars. His collections over the past few years filled the warehouse.

“The traditional material of furniture is mainly wood, including our traditional Chinese furniture. But in mid-century modern pieces, lots of new materials were used, including metal, even glass fiber reinforced plastics, which is really attractive to me,” Double said.

“The name ‘one hundred million’ doesn’t mean I’m going to make such a big amount of money. Actually, it is a small target for me, a small joke. It also has an extended meaning: The culture behind the items is invaluable. I hope to bring more beautiful things for everyone, also a kind of lifestyle.”

In the warehouse, visitors can find lots of unique chairs, such as iconic chairs by Hans Wegner, whose name is synonymous with Danish design the world over.

One of Double’s recommendations is the famous 1-2-3 system dining chair by Verner Panton, one of Denmark’s most influential 20th-century furniture and interior designers. The S-shaped chair on a chrome butterfly has already become a classic.

There are several eye-catching items, including a “car sofa” refitted from the back half of a 1960s Mustang.

Some displays have gone viral on social media, attracting visitors from a long way to come to take photos.

First of all is a dark red 1941 Ford Model A convertible, an ancestor of the modern industrial assembly line car, parked in the middle of the warehouse. 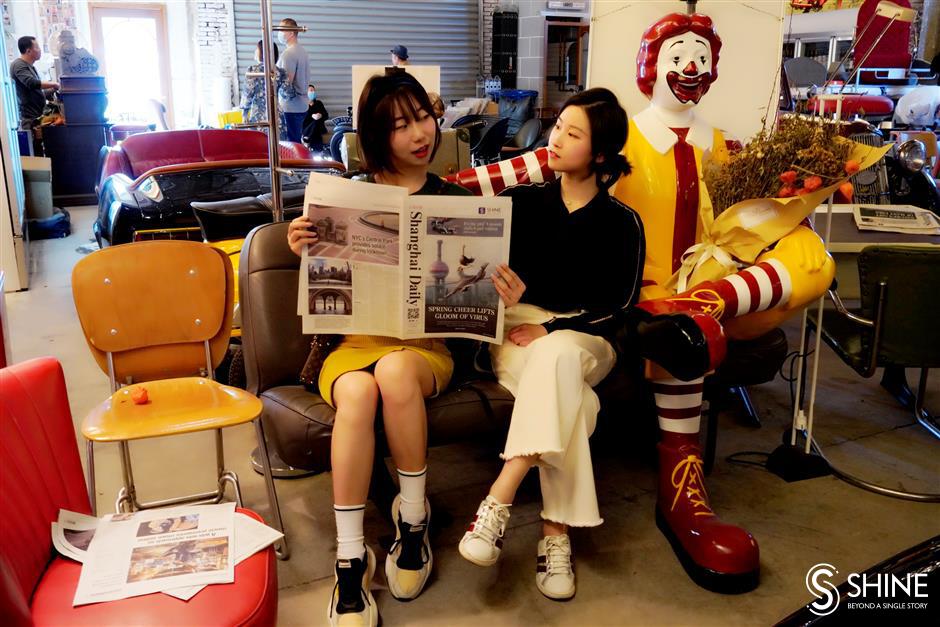 Fiona Li and Shirlene Gu sit on a sofa with a McDonald statue beside them.

Another popular display is a vintage Ronald McDonald life-size statue sitting on a sofa. Beside it is a row of arcade machines.

Behind a mountain of chairs, each wall of the warehouse shows its own iconic style, such as the geometric elements from Piet Mondrian’s works, or mid-century posters.

“For me, all visitors are welcome. You can take pictures as you like, only don’t trample on or damage the furniture,” said Double .

For visitors who want to have afternoon tea in the park, another warehouse serving coffee and dessert are in Double’s plans. “There will be some master works for display, like an art studio,” he said. 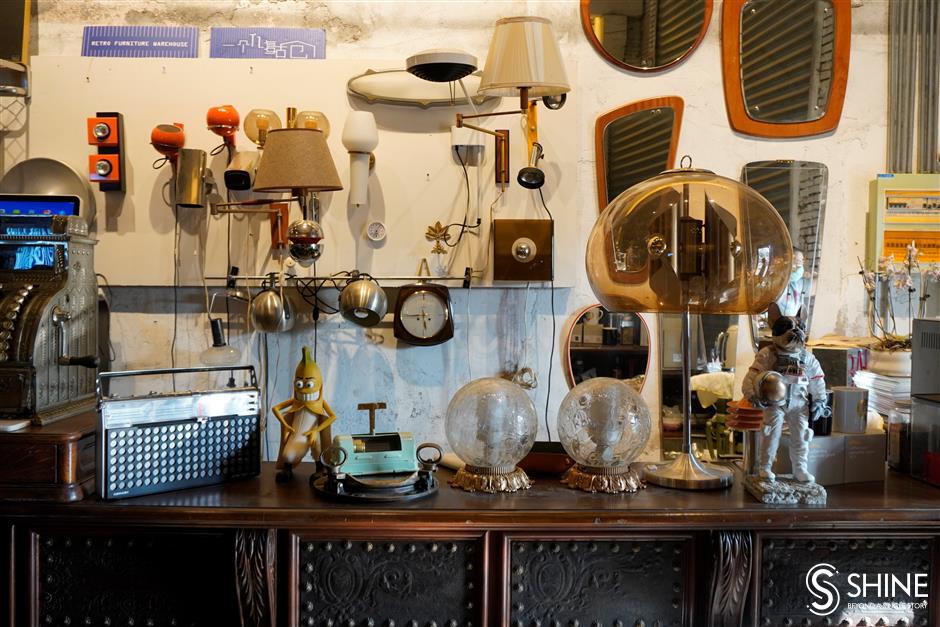 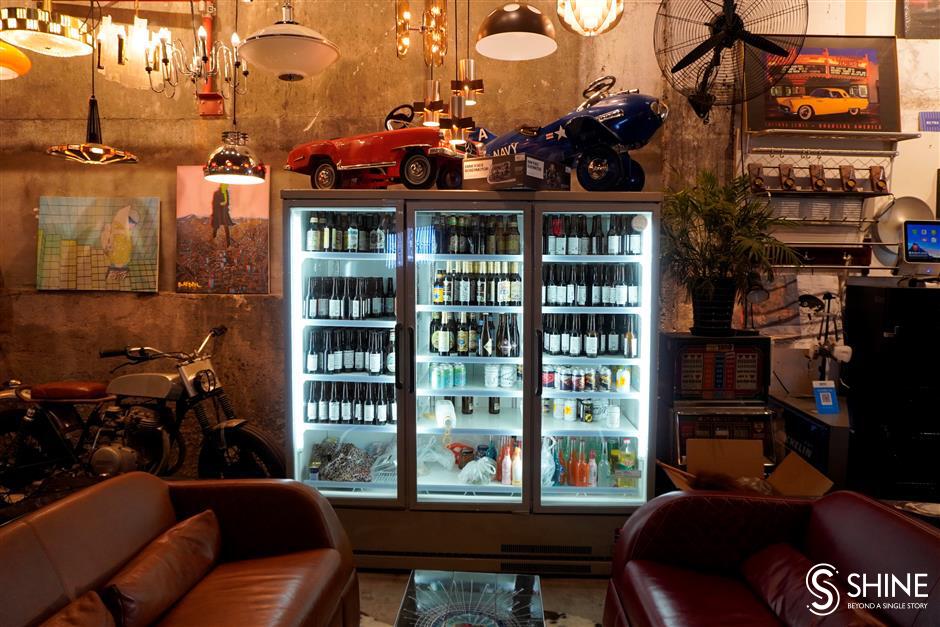 Beers and other drinks are served at One Hundred Million Retro Warehouse. 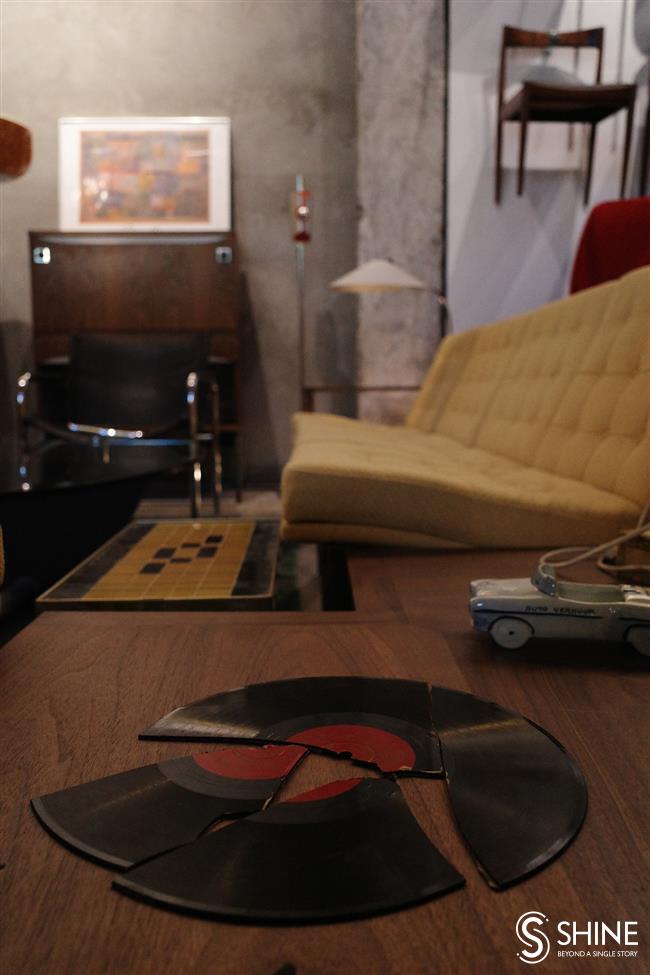 A broken vintage phonograph record is on a desk as a decoration.

Special Reports
ADVERTISEMENT
61908
,
At trendy Minhang vintage shop, photos are definitely welcome
Something for everyone at Jiading's festival for shoppers
Snoopy the Dog
Buyers are back! Retail in post-pandemic mode
Hei Dou the Cat
Milk the Cat
'Silent baristas' find respect and hope for better lives
Service with a dimpled smile and a flower
He gives the dearly departed a caring farewell
Father saw the Party as hope for the future
EXPLORE SHINE