For one survivor, variety is the spice of life 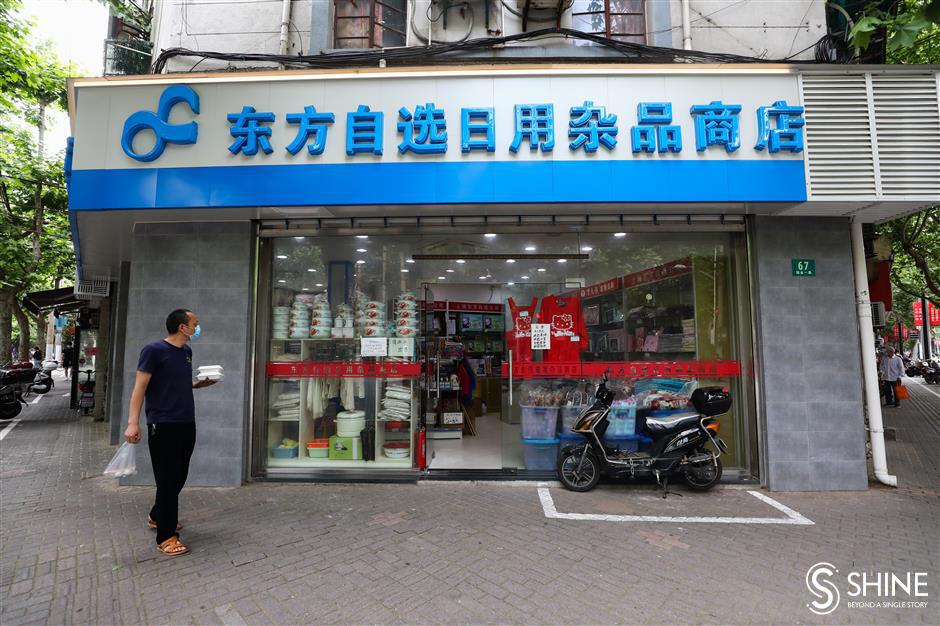 The shop at the intersection of Julu and Ruijin roads is the only remaining outlet of the once popular Dongfang Zixuan variety stores.

A reader named Chen Yongbao asked where to buy a rat trap. Wang Jianhua wanted to know where to find made-to-order bamboo mats. Li Wen needed something as simple as a bathtub drain stopper.

In each instance, the answer was the same: Go to Dongfang Zixuan, a variety store.

The digital era, when we can find almost everything we need at online shopping sites, makes the questions seem a bit quaint. But for many older residents, brick-and-mortar variety shops remain indispensable for buying the trifles of life.

Dongfang Zixuan was established in 1993 and became the first store in Shanghai to trial self-service shopping. Its once dozen branches have fallen victim to urban renewal, except for one remaining shop, located at the intersection of Julu and Ruijin roads.

Even a person of the digital generation like me found the store interesting to visit.

What’s on offer? Well, among other items, a bag of roach-killer pellets for 3 yuan (42 US cents). A pair of sleevelets for 3 yuan. An old-fashioned washboard for 20 yuan. A dish cover for 10 yuan, and a spittoon for 35 yuan.

“The cockroach bait is very useful,” store manager Chen Yong, 59, told me. “Just one pellet can kill a whole family of cockroaches. Some customers living in the Pudong New Area and in the Pengpu Xincun area tell me they spent hours to get here to buy cockroach bait.” 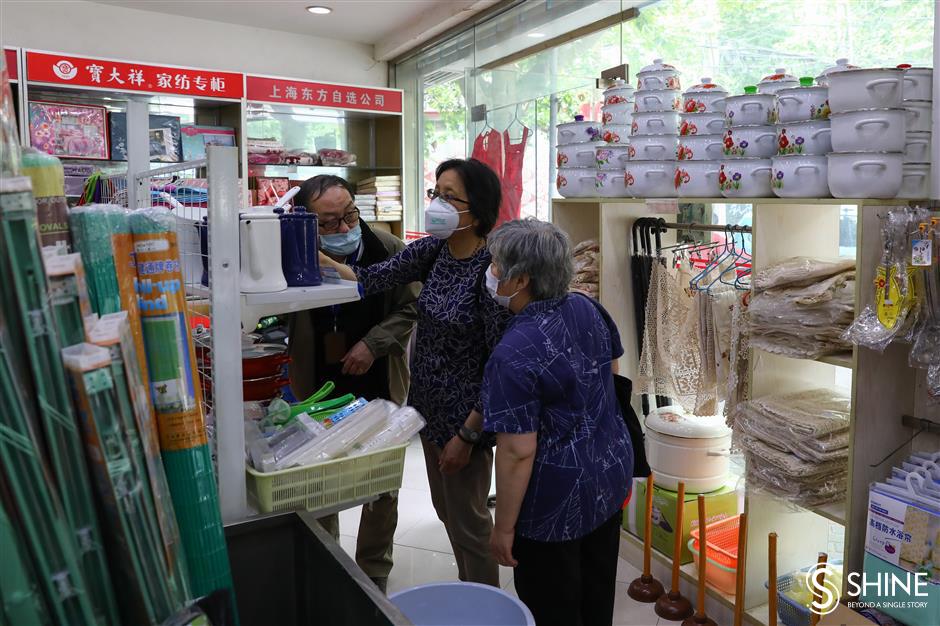 According to Chen, this surviving variety store had its origins about 80 years ago, before becoming state-owned. It was later an innovator in self-service, ending the long tradition of merchandise stacked behind counters, with consumers having to ask shops clerks for what they wanted.

“Self-service retail allowed customers to help themselves to the products that they wished to purchase, which is more efficient,” Chen told me.

He recalled that before the existence of this business model, consumers might contend with surly shop assistants who sometimes made them feel ill at ease in asking for help.

After graduating from high school, Chen began working at the variety store in 1981 before it became state-owned. It looked completely different back then. Instead of today’s large green public space out front and surrounding upmarket residences, it rubbed shoulders with old neighborhoods and a wet market.

“It was like today’s convenience store at their doorstep,” said Chen.

“We once delivered merchandise as far away as Hongqiao by e-bike,” he said.

Cotton quilts, which are rare to find in the city’s modern shopping malls, are a signature product at the shop. The quilts cost 70 yuan per kilogram, and the price hasn’t gone up in seven years.

In the old era of China’s planned economy, purchasing a cotton quilt required ration coupons. For parents of brides-to-be, eight to 10 quilt coupons had to be collected because such bedding was part of traditional dowries, along with other practical items such as tableware, enamel washbasins fes­tooned with fish, mandarin ducks or dragons and phoenix, and spittoons with the Chinese character xi, symbolizing happiness.

All such old paraphernalia can still be found at the variety store. The merchandise attracts not only older residents but also curious foreigners who live nearby. According to Chen, one expat recently purchased an enamel mug imprinted with the figure of Lei Feng, a young army officer who died and became a national symbol of selflessness, hard work and devotion to country. A novelty purchase? 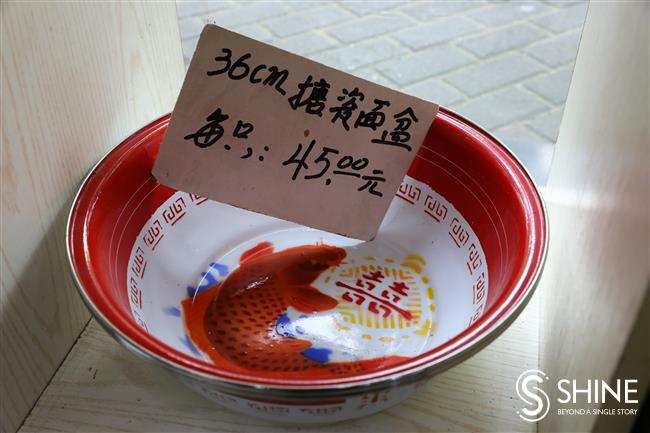 Enamel washbasins were once essential for bridal dowries.

Walking with a bamboo crutch, a 95-year-old man surnamed Gu came into the shop to buy a thermos bottle. Living several blocks away, Gu said he has been patronizing the variety store for a long time. Chen informed him how to use the container and then kindly told him to walk safely.

A woman in her 60s came in to buy a replacement lid for a spittoon.

“Although our home has a bathroom,” she explained, “we older people use spittoons in the bedroom if we have to get up in the middle of the night to pee.”

A couple in their 50s, who were on their way to a nearby restaurant, stopped by to have a look at the shop’s enamel cookware — a nostalgic reminder of their younger days.

“It looks exactly the same as the one my family used in the past,” said the woman. “The pattern is still peony. Food left in the enamel cookware wouldn’t turn bad overnight. When I was young, my mother often kept braised pork with bamboo shoots in the cookware and ladled out a little every day in the winter. The favorite Shanghai dish would last for a week.”

The variety store thrived in the 1980s, with more than 30 shop assistants. Compared with those bustling times, the shop today seems very lifeless, Chen said.

“The business slowed with the rising popularity of supermarkets in the 1990s,” he explained. “The bigger blow came from online shopping in the 21st century. However, we won’t close our shop as long as it doesn’t become the target of urban renewal.” 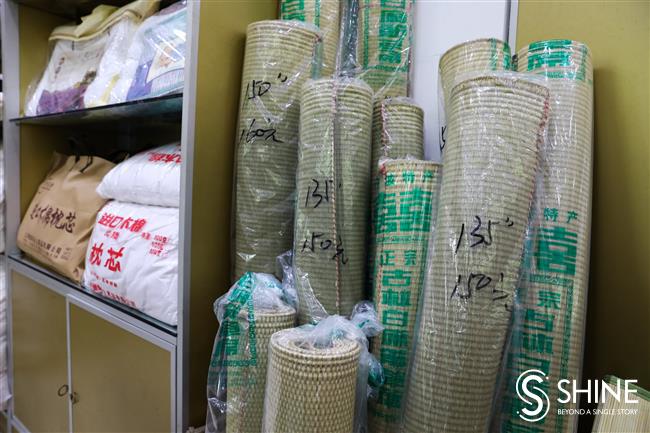 Rolls of straw mats made in Ningbo in Zhejiang Province are in great demand in summer.

Special Reports
ADVERTISEMENT
61838
,
For one survivor, variety is the spice of life
Sino-Italian fashion event focuses on unity, resilience
10th flower expo countdown springs into life
Countdown to 'Blossom with a Chinese Dream'
Vlog: Checking out what's cool and chic on the North Bund
Library branch focuses on vocational skills
Whose surname should a child be given? Aye, there's the rub
Unlocking music appreciation with 88 keys
An unbridled approach to diverse, creative ventures
At trendy Minhang vintage shop, photos are definitely welcome
EXPLORE SHINE