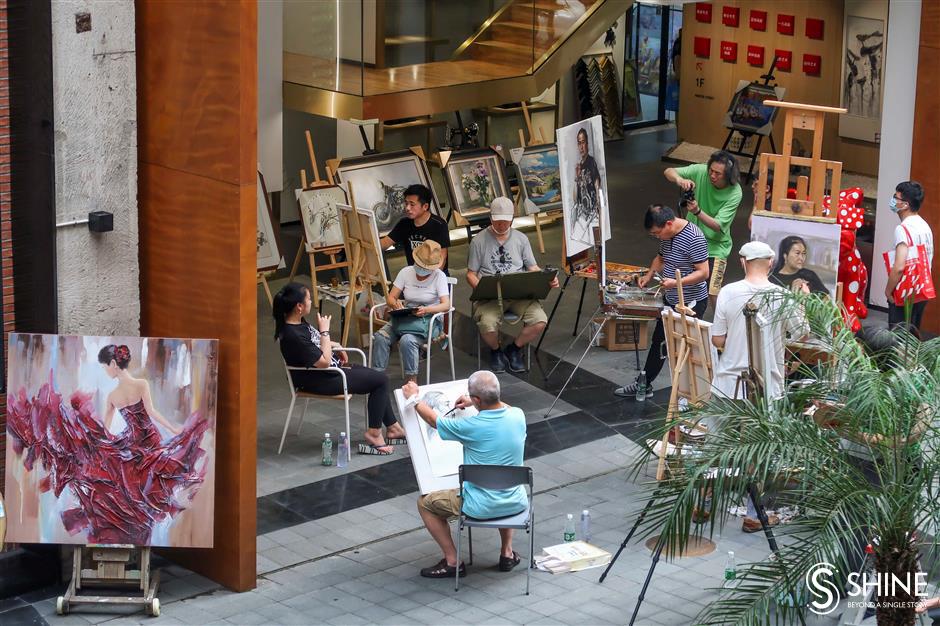 Painters draw a female model as part of an art fair held every Saturday afternoon on Painter’s Street.

A 360-meter-long street in Xuhui District has become an artists’ hub. From traditional Chinese painting to abstract, impressionistic, surrealistic and even graffiti art, Painter’s Street is creating original works of interest and quality.

The stretch of street on Wending Road is near the Tou-Se-We area, which is known as the “cradle of Western-style art in China” because so many Chinese art pioneers, including Xu Beihong (1895-1953), once studied at an art school there.

A large sculpture of a girl with closed eyes blowing bubbles from chewing gum stands in front of the entrance to the street. Tropical fish in a big aquarium also welcome art lovers. Several picnic tables equipped with patio umbrellas are placed in the middle of the street, flanked by rows of galleries and studios.

A number of sewing machines and balls of yarn used to decorate a large wall remind visitors of the history of the location.

The precursor of Painter’s Street was Shanghai Yongxin Raincoat Weaving & Dyeing Mill, the only one of its kind in China at the time and one of the earliest manufacturers of raincoats in Asia.

Renovated by Shanghai Garment & DoBe We” International Hub, the street with a history of around 20 years reopened with a new look last summer.

“It was transformed from what was essentially a flea market into today’s creative park,” says painter Shen Li. “I am happy to see the changes. It is like witnessing a child coming of age.” 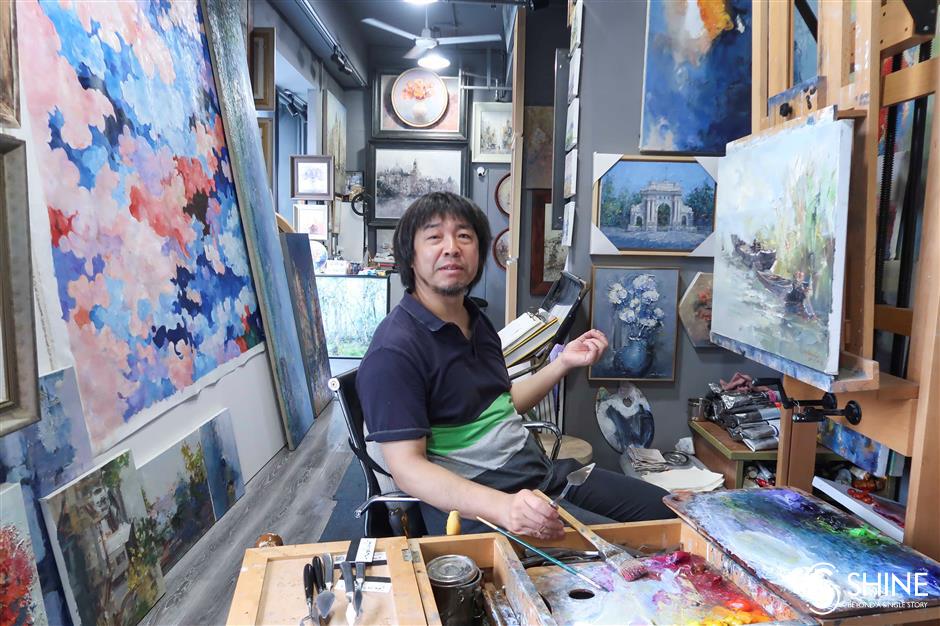 Shen Li’s gallery is filled with his original works.

Shen, who hails from northern China, has been operating a gallery-studio on Painter’s Street for more than 10 years. I first meet him on a rainy weekday when there are few visitors around.

Moving from Beijing to Shanghai in 2003, Shen has developed a deep affection for the city. His gallery, named after himself, is filled with his original works capturing the beauty of Shanghai.

One of his recent works portrays a community worker taking a resident’s temperature at the gate of a lane of old red-brick houses. He caught a glimpse of the scene in a walk there and froze the moment on canvas.

“I like walking in the city,” says Shen. “I once enjoyed the view of the Bund in Pudong for a whole day, and then took the last ferry back to Puxi. It was about 11 in the evening. I wandered in the city until dawn. I walked from the Bund to the Painter’s Street.”

For Shen, Shanghai is his muse. To capture his ideas, he always carries a leather sketchbook and several exotic fountain pens. The coffee lover likes going to cafes and even uses coffee as pigment in his artworks.

Sitting with a cup of coffee in his gallery, he sometimes watches people walk by and tries to imagine what their lives are like. That often gives him inspiration.

“Unlike other high-end galleries, this street is down to earth,” says Shen. “Art imitates life. In my gallery, I can communicate with customers and share life experiences with them.”

He also uses his gallery as a window to popularize art appreciation for those without much art knowledge or any formal training.

Since Painter’s Street is surrounded by furnishing stores, many people come here to find paintings for their homes. Ranging from hundreds to tens of thousands of yuan in price, works for every pocketbook can be found along the street.

According to Shen, a lot of foreigners visited Painter’s Street before the renovation. About 50 percent of his customers were previously foreigners. However, the coronavirus epidemic slashed their numbers down to three since the outbreak.

An Australian customer in his 60s, who taught chemistry at an international school in Shanghai, keeps in touch with Shen on WeChat since he moved to Italy. They have known each other for more than 10 years. They became friends and, despite the language gap, once visited the Qibao ancient town in Minhang District together.

“He wanted to drink coffee and I led him to KFC, which he rejected,” says Shen. “Finally, we found a bakery. The owner from Taiwan could speak English. He sat down with us and told us about the old town area.”

He adds: “Just thinking about all the friendly people I have met and the amazing things that have happened here, how can I not love the city?”

Huang Yi and Chen Yishui, founders of Red Wall Art Gallery, are also the old friends on Painter’s Street. Running the gallery there for 17 years, the couple admits that the epidemic has dealt a severe blow to the local arts. Fortunately, none of the galleries has had to close yet, according to Chen.

All the tenants on the Painter’s Street were given two months rent-free during the height of the epidemic and lockdown, which eased the burden on them.

“Painter’s Street is a cradle for artists,” says Chen. “Every gallery is associated with dozens of painters who are young and unknown. They eke out a living by creating artworks. Most painters have to go through that early stage. For them, Painter’s Street is essential. If galleries close, this talent will be lost to other jobs.”

Huang says that one of the owners of a gallery on the street jokingly told her that he might have to return to his hometown in Guangdong Province and run a food stall.

Red Wall Art Gallery acts as an agent for around 40 artists. Apart from several famous artists, like Zhang Zhanzhan, most of them work in obscurity. The feeling of anxiety has hung over them since the coronavirus outbreak.

To attract people to visit the street, an art fair has been held every Saturday afternoon since April.

I return to Painter’s Street on a Saturday. The street is lined with artists’ works. Around 10 artists, mainly owners of the galleries on the street, are busy at their easels on one corner. They are drawing a female model. Many visitors, including children and foreigners, stop to watch.

I ask a painter about why he does art.

“Why do people always pay mind to the purpose of painting?” replies the painter, who is drenched in sweat. “I simply enjoy its process.”

In the current heat wave, stalls selling oil paintings, traditional cheongsam dresses, folding fans with bamboo ribs, embroidery and jewelry are ensconced inside a building of curios on a street adjacent to Painter’s Street.