Hard work behind the scenes at grape park 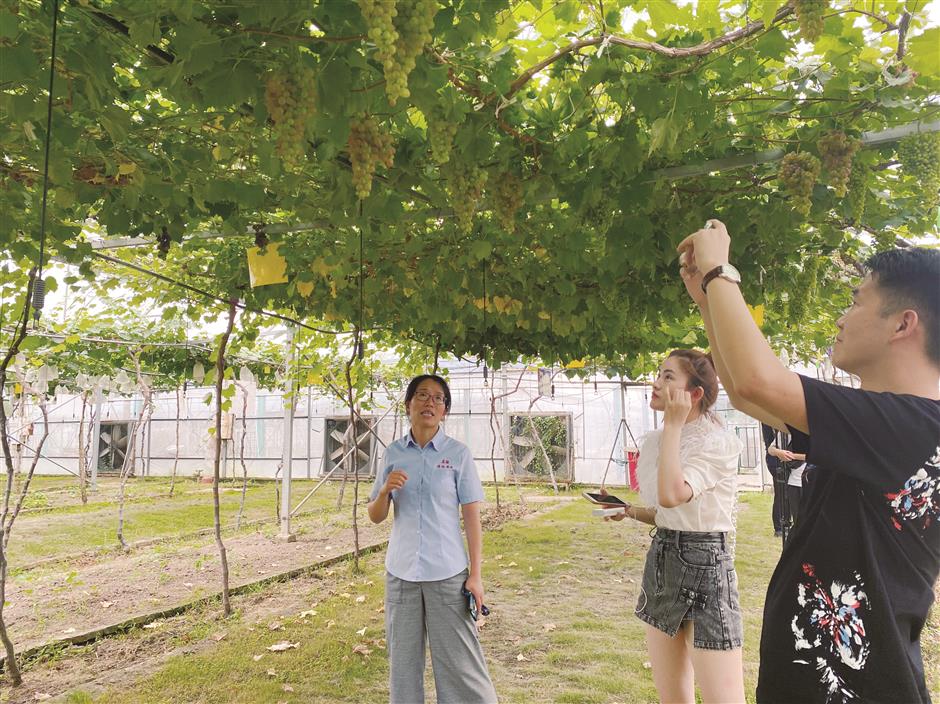 Wang Suqing (left), vice manager of the Malu Grape Themed Park, briefs visitors about the park’s grapes. Every bunch has its own “ID card” with details such as the species, color, taste and planting patterns.

As summer is the season for grapes, it is the busiest time of the year for the Malu Grape Themed Park with a great many visitors flocking to the park to pick the fruit and take boxes back home.

The prosperity of the park is a credit to the growers.

Wang Suqing, vice manager of the park, is one of the backstage workers who have been constantly improving cultivation methods and providing grapes in high quality for visitors for 12 years.

When she was about to graduate from Huazhong Agricultural University in 2007, she applied for a job at Shanghai Malu Grape Research Center and was given an interview.

She recalled the interviewer — Shan Chuanlun, chief of the center — asking: “We are a front-line agricultural center which requires staff to go into fields instead of sitting in an office to write reports or compile files, even though you are a girl. Are you still willing to work here?”

The tough environment didn’t dampen Wang’s strong desire to work at the center and she immediately responded “Yes.”

In fact, Wang was a perfect match for this position because her family made a living by planting grapes. Born into a peasant family in Jiyuan in central China’s Henan Province, her childhood was filled with farmland and grapes.

“When my parents put the old-style atomizer on their back to spray pesticide, my brother and I would follow with the water pipe. The grapes grew in the open air, so they were vulnerable to insects when they became ripe, especially scarabs which would eat the grapes up. So we had to sell them as soon as possible,” she recalled. “Maybe my personal experience and endurance of hardship appealed to chief Shan and helped me get the job.”

Wang credits her success to Shan. Her first position was to deal with paperwork, though she was not a good writer. Shan helped revise her drafts over and over again till he was satisfied.

Because of this, Wang’s writing quickly improved and her essays were frequently published in Grape Brief journal.

“People always see chief Shan wearing a smile on his face, but he is very strict with us and sometimes will lose his temper,” said Wang. “But thanks to his strictness, I could grow up so quickly and become the person he trusts.” 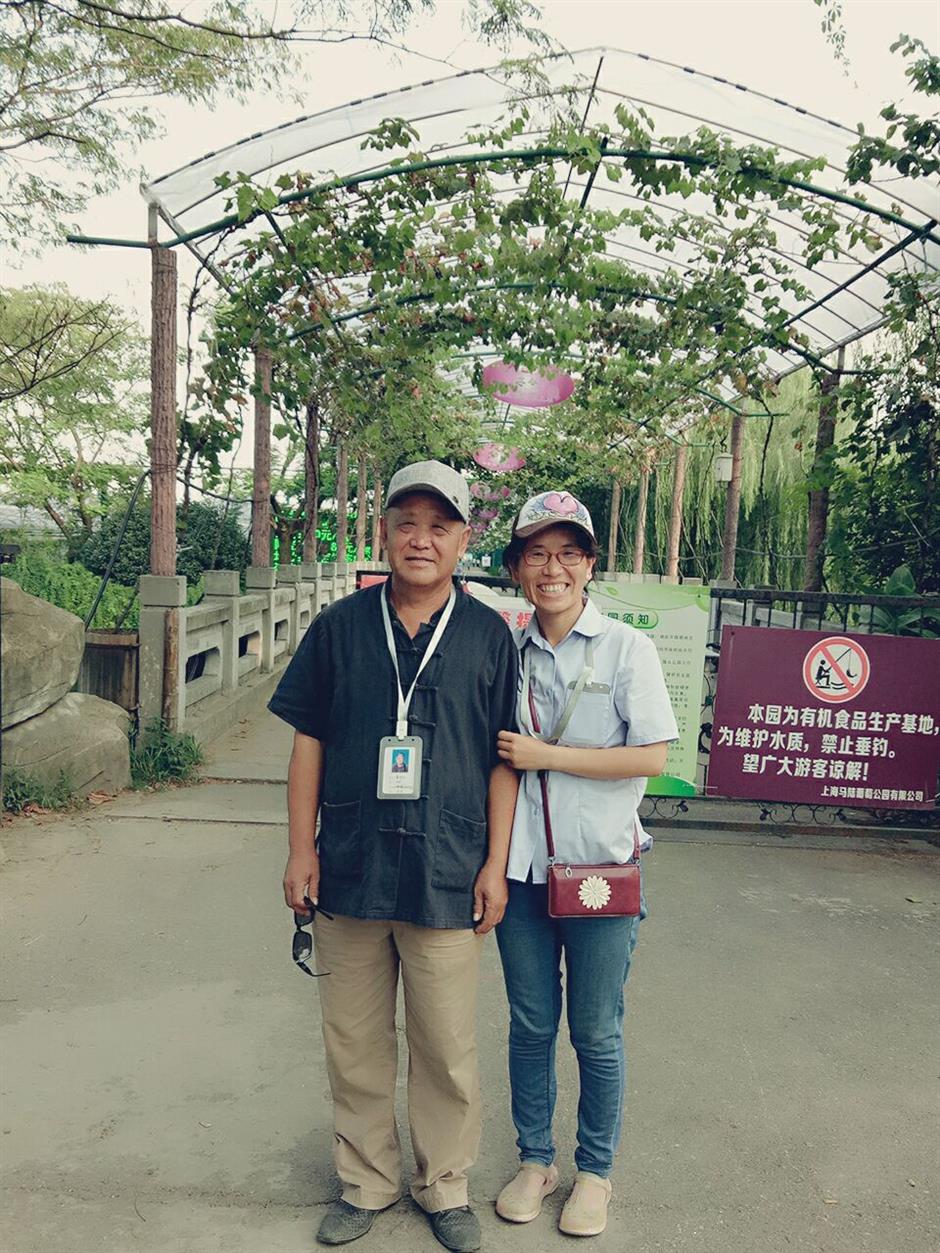 In the spring of 2012, Wang was assigned the task of arranging the flower clusters of the Jufeng grape in four-fingers wide. However, four fingers are around 5 centimeters wide, so if arranged the clusters according to Shan’s standard, they would be extremely small.

Wang was confused, but Shan told her she must do exactly what he said untill the grapes became ripe.

She followed the instruction and spent a whole day only arranging the flower clusters in one greenhouse with the help of her husband.

She tested the length of each inflorescence and paid attention to the weather every day until the length met the requirement. Under this arrangement, every bunch could bear 40 to 45 grapes and that’s why the grapes in the park seem smaller than those sold in the market — quality takes priority over size.

Wang has another important task these days — to cultivate grapes using the technology of the Internet of Things.

The park has completed the automation of 150 mu (10 hectare) of multi-span greenhouses and an intelligent renovation of a 4,000-square-meter greenhouse since 2018. The intelligent greenhouse can monitor the grapes’ growing environment in real time and has a series of facilities including automatic irrigation, water and fertilizer integration, automatic pesticide spraying and ozone water disinfection. 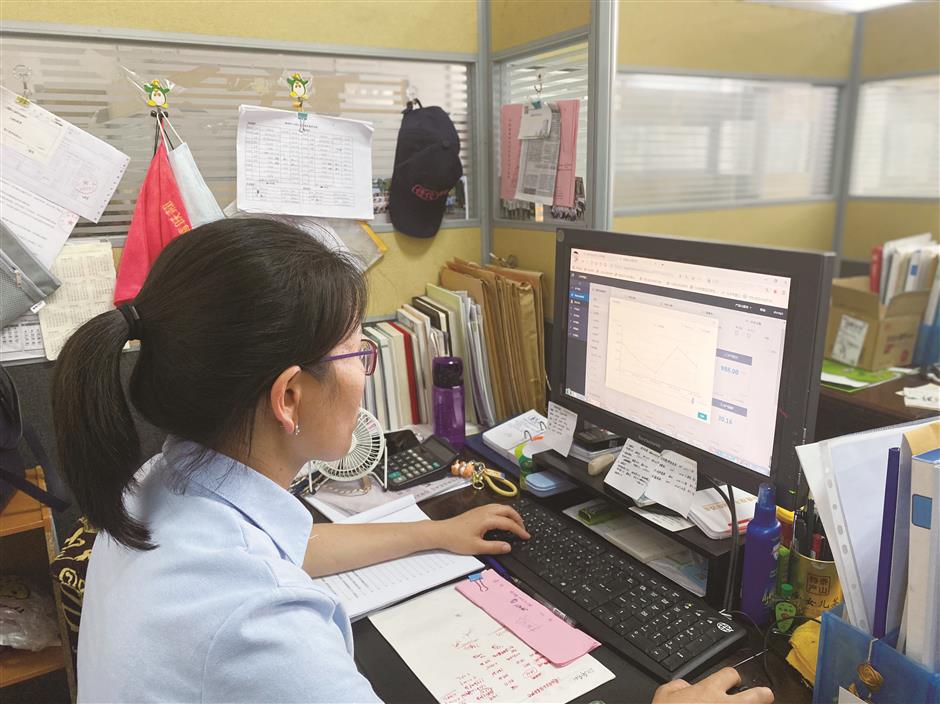 Wang checks data on a computer with piles of reference books and notebooks on her desk. She can monitor data in real time with the help of the Internet of Things.

“In the past, fruit growers had to go into the fields to check the status of the fruit. Thanks to IoT, work is less taxing. However, less interaction between people and fruit may cause problems at the same time,” said Wang.

“One time, the staff found that one greenhouse was shut tight and the grapes inside went bad because of the high temperature and lack of ventilation. We weren’t alerted through the IoT platform, and it turned out that a sensor had stopped working,” she said.

The park planned to apply for the “Shanghai Standard Fruit Garden” title two years ago. Then Wang optimized the planting technology, customized packages for grapes and promoted the Malu Grape brand on the market. She also stressed applying pesticides originating from plants or minerals and combining with organic and water-soluble fertilizer.

The park ranked the first among all fruit gardens at the end of last year.In the park, there is a greenhouse with more than 110 species of grapes. It was built to promote popular science. Every bunch has its own “ID card” with details such as its species, color, taste and planting pattern. Wang attaches those cards, climbing up and down a 3-meter ladder hundreds of times. She hopes visitors can not only pick grapes, but also pick up knowledge behind them.

The park recruits college students working in the grape fields every summer since 2013. Even though they are just interns, Wang is strict to everyone without exception.

“It was a tough job, but I met a good mentor, and my efforts paid off. So I use what I learned when I was young to treat these new graduates, hoping they can overcome the difficulties and stay in the front line of the agricultural industry even though it’s not easy.”

﻿
Special Reports
ADVERTISEMENT
61763
,
Here's life on the street in all its infinite variety
Hard work behind the scenes at grape park
Life Hub to savor the flavor of Spanish culture
Taiwan 'Chicken Little' meets fate despite cute helmet
Vlog: A mini IKEA, just across the road from Jing'an Temple!
Grandparents-turned-fashionistas become #Instafamous
Trendy shops add fresh vitality to historic street
Charity exhibition redefines the meaning of home
Get animated at the CCG Expo 2020 in Shanghai
Keeping the 'eyes on the street' wide open
EXPLORE SHINE