On Life And Death
Shot by Zhou Shengjie and Hu Jun. Edited by Zhong Youyang. Subtitles by Wang Haoling and Shen Ke.

When Wang Ying was given the devastating news she had cancer two years ago her world almost caved in. It seems to be an ugly, twisted irony to the news because Wang works as a hospice care worker.

The 41-year-old has worked in the health care industry for more than 10 years and led 1,380 volunteers to help more than 40,000 cancer-suffering patients through their trauma, providing hope and inspiration in the face of adversity.

Yet, despite her training and experience in dealing with the dreaded disease, she broke down into tears, though her boyfriend, Huang Weiping, provided some calm during the storm.

“When my mother was diagnosed with breast cancer in 2006, I managed to remain calm despite being upset. But to prepare for the worst, I asked Huang for support, so he could ask the doctor what I needed to do,” said Wang.

To each family with a cancer patient, the fatal illness is like an earthquake.

She is co-founder of Shanghai Hand in Hand Life Care Developing Center, a non-government life-care organization. They help advanced cancer patients, dying people and their families, by creating activities focusing on palliative and hospice care, social services and the promotion of life and death education to help them cope with it.

Huang, now Wang’s husband and also the center’s co-founder, proposed to his girlfriend after she was diagnosed with lymphoepithelial carcinoma, a malignant tumor, which temporarily paralyzed her left cheek and deprived her of her sense of taste.

“Being her husband makes it easier to sign so many medical files as a family member when she needs treatment,” Huang said. “I never felt so important to her. She trusts me enough to let me share life and death decisions with her, which has moved me enormously.” 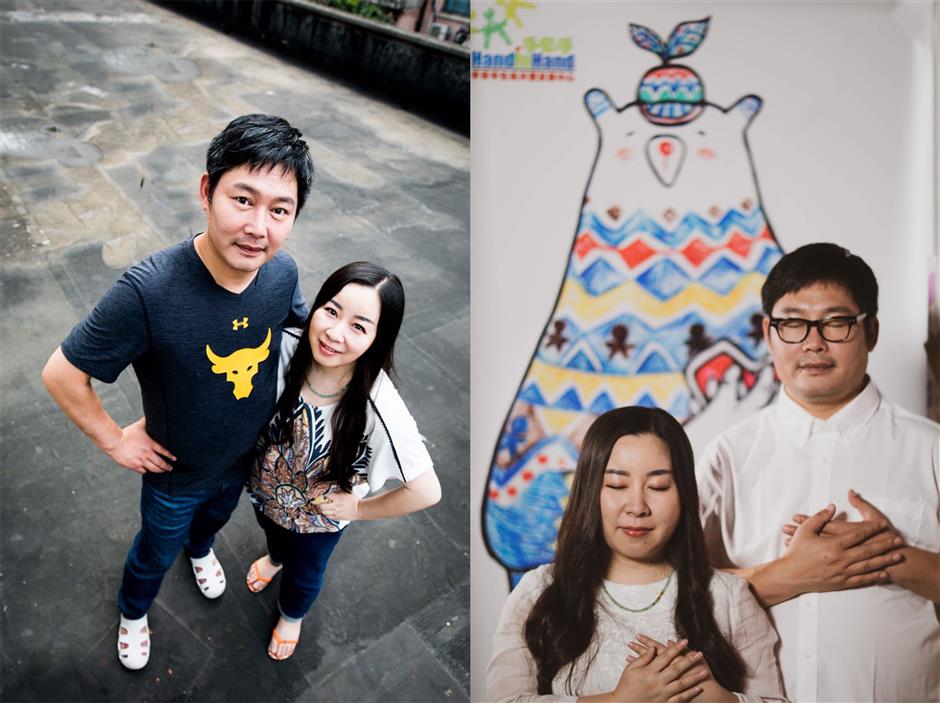 Wang and Huang’s story began in early 2008 when they met on a psychological consultancy course. Wang took the course because she wanted to help her mother get through her breast cancer treatment, while Huang was retraining after a failed trade investment business and his first marriage broke down.

One of their first volunteer jobs was providing psychological support for people when a devastating earthquake hit Sichuan Province on May 12, 2008 — almost 90,000 died or were counted as missing.

“I suddenly realized that when people face death, they feel isolated. It was just like my condition when I faced up to my mother’s illness. I wanted to help people feel warm,” said Wang, who spent two weeks in the disaster area with the Shanghai psychological and mental health aid team, while Huang remained there for three months.

Wang Ying comforts a teenager in Huagai Town of Mianyang City in May 2008 after a devastating earthquake hit southwest China’s Sichuan Province. She spent two weeks in the disaster area as a volunteer providing mental health aid. 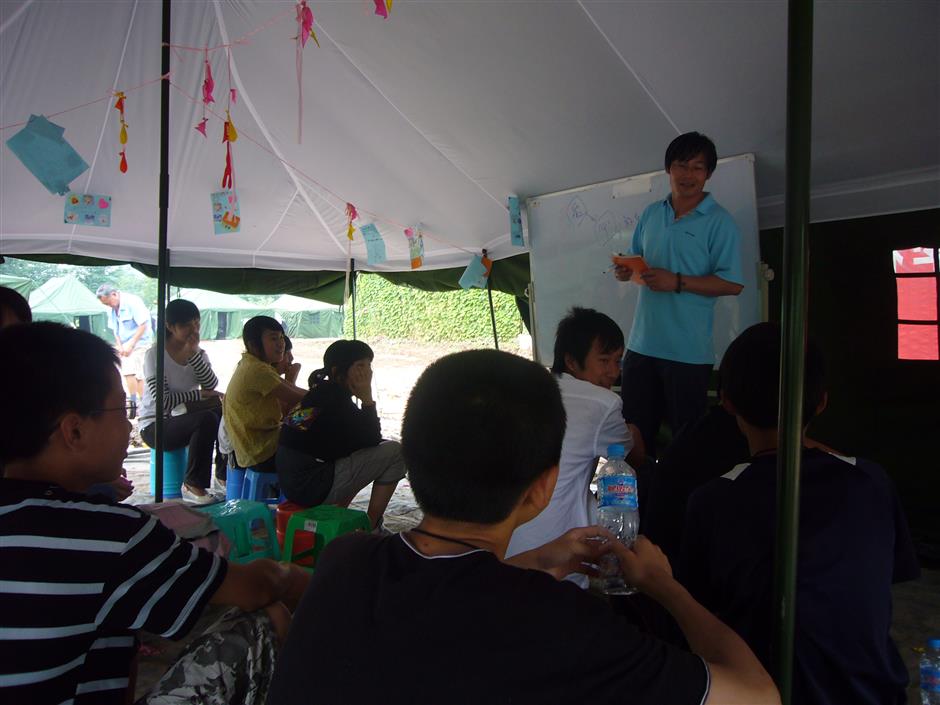 After coming back, the couple decided to use that experience to help people in Shanghai.

“To each family with a cancer patient, the fatal illness is like an earthquake,” said Wang. “When one gets cancer, every family member’s work and life schedule is scrambled and relationships change. We found most people did not know what to do, so we decided to help and support them.”

Wang, who left university with a vision design major, quit her job as an advertisement project manager after eight years, pooled her money with Huang and became full-time volunteers.

The couple had no income for three years after they founded Shanghai Hand in Hand Life Care Developing Center until they won a public welfare fund of 200,000 yuan (US$28,200) in 2011. It goes without saying it was tough having to survive on their savings while helping others.

Official statistics in 2008-09 revealed 28,000 cancer patients died every year in Shanghai, and yet only 60 palliative and hospice care beds were available in the entire city.

Wang and Huang, together with several lawmakers and political advisers, successfully lobbied to get more hospice beds and wards in the city. Now Shanghai has 76 hospitals providing hospice care services with about 2,000 beds. 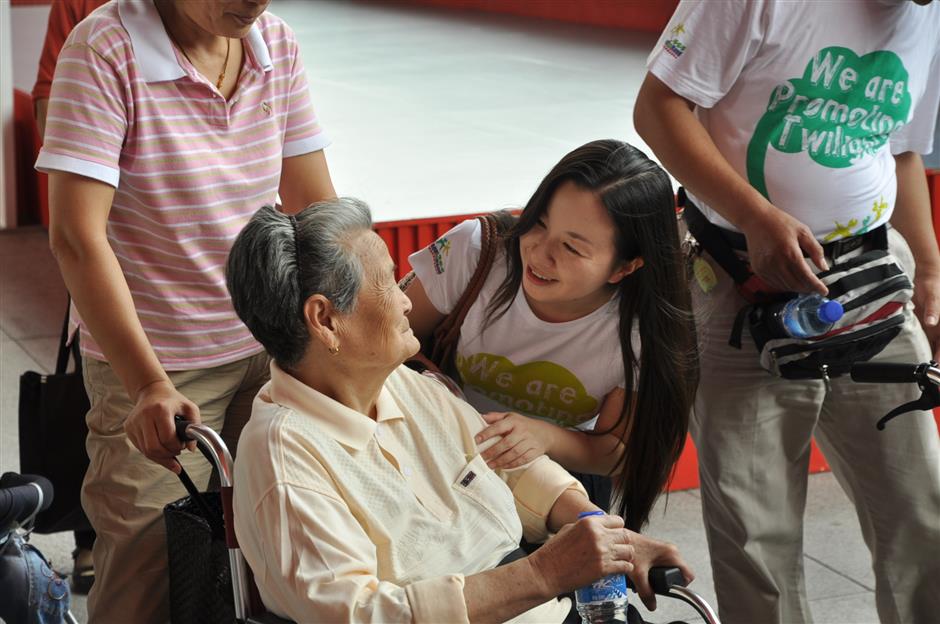 Wang continues to help people as a volunteer in Shanghai.

After that success, the couple investigated other options to help cancer victims deal with their illness. Wang discovered Death Cafe, which was founded by Jon Underwood in London in 2011.

It was an activity where a group of people, often strangers, gathered to discuss death “to increase awareness of dying with a view to helping people make the most of their lives.”

Wang introduced Death Cafe to Shanghai in 2013 to encourage more open discussions about death in a respectful and safe environment without any criticism or arguments.

“When my mother was diagnosed with cancer, we could not talk about it during our mealtime, no one mentioned death, because cancer is horrible, and so is death,” Wang said.

The topic of death is like a compressed package, and the Death Cafe provides a chance for people to decompress some of their pressure.

Huang added: “The topic of death is like a compressed package, and the Death Cafe provides a chance for people to decompress some of their pressure, which is good.”

The Economist Intelligence Unit published a quality-of-death index in 2015, which used 20 indicators to measure the effectiveness of end-of-life care in 80 countries — China ranked 71st. Community engagement is one of the indicators.

“The Death Cafe is a way to increase public engagement,” Huang said. “As a host over the last two years, I feel that talking about death is no longer a taboo, at least in a confidential environment like the Death Cafe.”

Thanks to Shanghai Hand in Hand Life Care Developing Center, altogether 540 Death Cafe events have been held in 15 cities across China over the past two years. 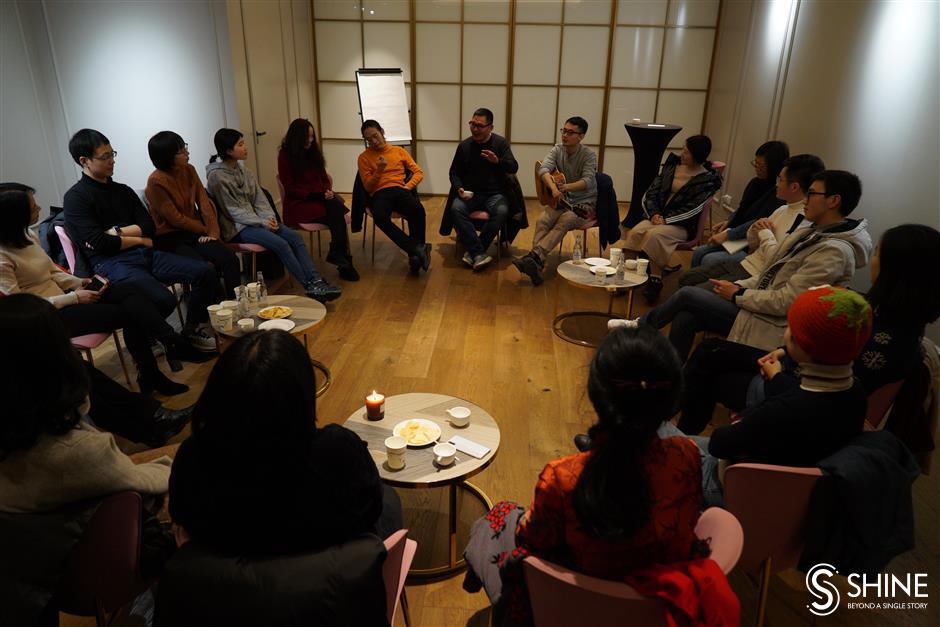 A Death Cafe is an activity where people get together and raise awareness of dying, which helps people make the most of their lives. 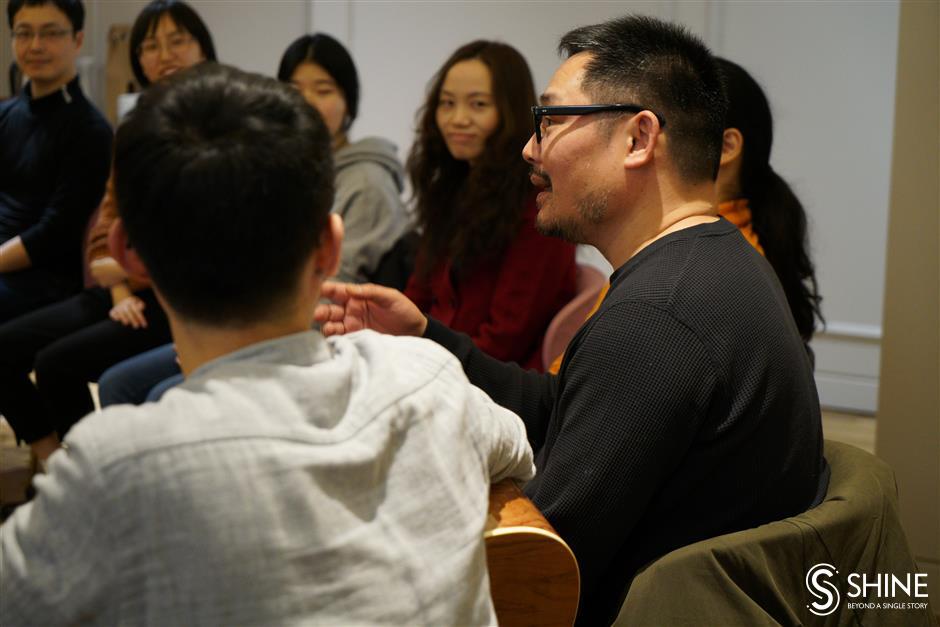 Wang is still being treated for cancer but selflessly spends most of her time providing support for those in need of help — and did so even during the coronavirus outbreak. The couple was busy during the Spring Festival and led 376 volunteers to donate epidemic supplies, worth 8.6 million yuan, to 128 hospitals at home and abroad.

Wang was relieved when her mother recovered from breast cancer but she still faces the inevitability of her own fate. The doctor told her that she might have one or two years left to live when she was first diagnosed, yet here she is two years on, still fighting the dreaded disease and helping others.

“When I got cancer, I knew I should try to do everything I could as quick as possible, while I still had the physical strength,” said Wang.

“The core of what we do is: face death and live better. After I got cancer, I knew more clearly than ever before what I wanted to do, and I feel happy.” 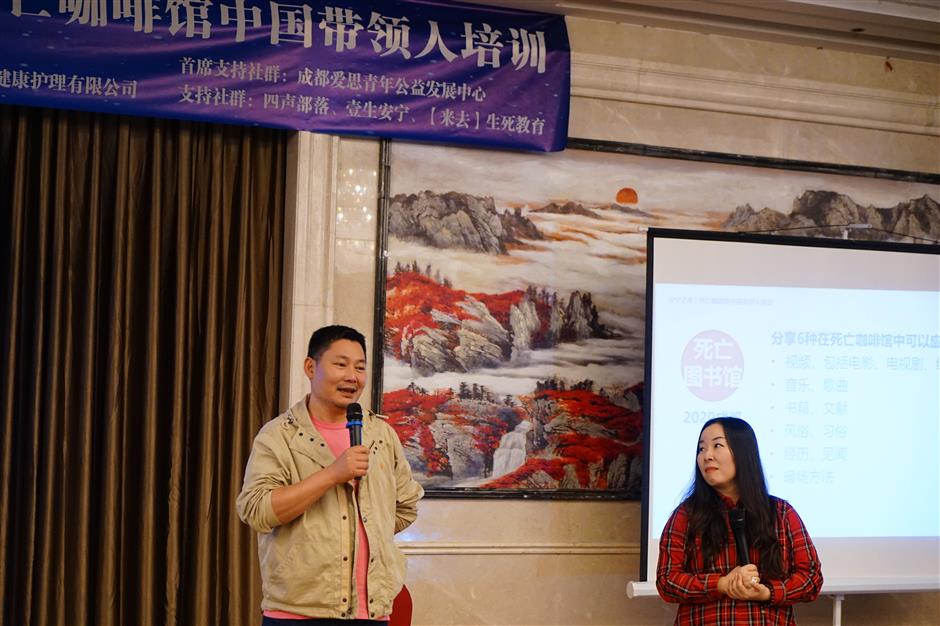 Huang shares his view while Wang is looking at him in a Death Cafe lecture recently in Chengdu, Sichuan Province. 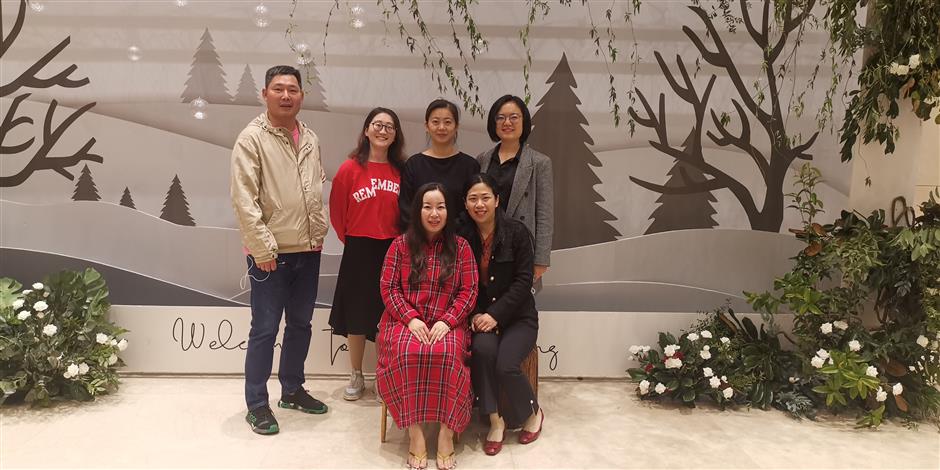 Wang: When my mother got cancer, as a daughter, I was at a loss and did not know what to do. But I listened to what the doctor said and could act on it.

My cancer affected me deeply at first, but I knew I could express myself, such as crying whenever I wanted. I wanted to continue having a good quality of life and I told the doctor to a set a conservative treatment plan, which was not recommended by doctor. The doctor suggested surgery, which was positive for my illness, but I wouldn’t accept it because the treatment would make me ugly.

Q: Can you give us some advice when faced with the fatal illness?

Wang: The most important thing is having the faith to go on living. If a patient has such belief in mind, he or she feels powerful. Don’t trust any folk remedy. When a tumor is developing, Western medical treatment is the most effective.

Before you go to a doctor, prepare a notebook and list all the questions you want to ask, because your conversation time, usually around three minutes, is limited. Try to make good use of it and get as much useful information as possible as what you need to do next.

Q: What problems did you discover during your decade as a hospice carer?

Wang: The concept and information of hospice care still needs to be promoted. Even now, people ask me where they have to go after a family member has been diagnosed with cancer and has no more than two months’ life expectancy. But after searching the Internet one guy found out we were doing hospice care and asked for help.

Huang: There are still problems with people’s concept of hospice care. Because the goal of hospice care is to give comfort and peace. It is not a cure. Many family members would feel they are giving up if they put their cancer relatives in such hospitals.

Q: What’s your next plan for the Death Cafe gatherings?

Wang: Outside of Shanghai we’ve been to Beijing, Guangzhou, Hangzhou and Chengdu, and we’ve given lectures and trained 563 new hosts.

Next, I am preparing a short course based on my experiences to share with more people.

China is big but I plan to go to different cities and chat with patients or people with cancer experiences there. I want to see what are their attitudes to death in their hometown and what is their customs and their understanding of death? We want to make more friends, and inspire people to do job together.

Huang: I have no plan all the time. I just like what I’m doing now and I will continue accompanying my wife doing hospice care.