The Beijing Department Store, a 66-year-old grocery store on Shimen No. 2 Road in Jing’an District, is attracting new customers with its collection of traditional Shanghai goods. 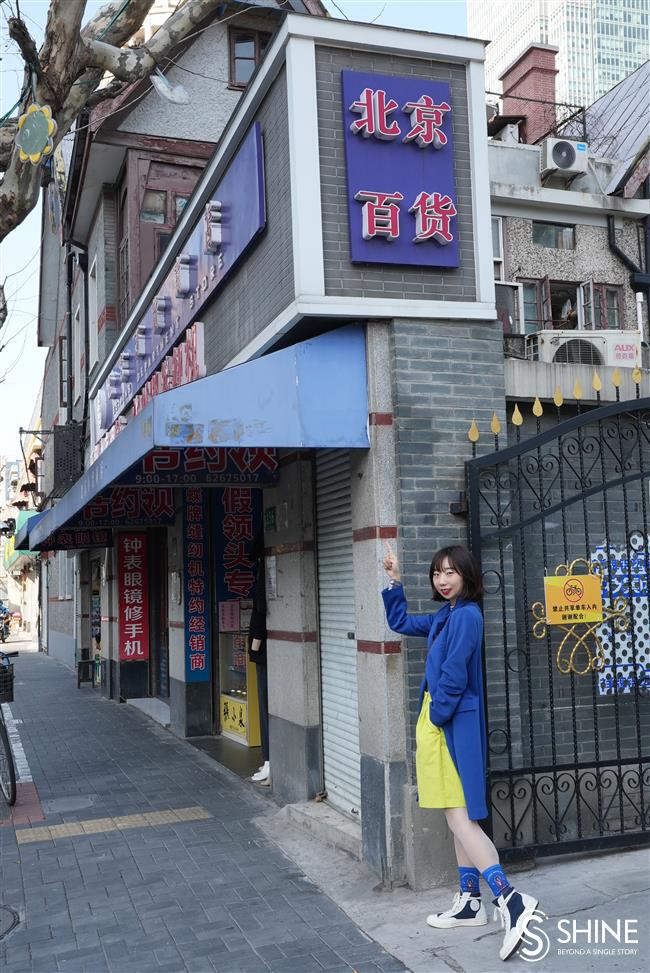 Fiona Li visits the Beijing Department Store, a 66-year-old grocery store on Shimen No. 2 Road in Jing’an District that is attracting new customers with its collection of traditional Shanghai goods.

After tanyu — an item used as a potty and spittoon in China — was sold on Amazon as a “traditional fruit basket” for US$61.96, many young people have visited the store for other traditional goods.

On Amazon, tanyu was advertised as a “table decoration” to store fresh produce, ice or wine. 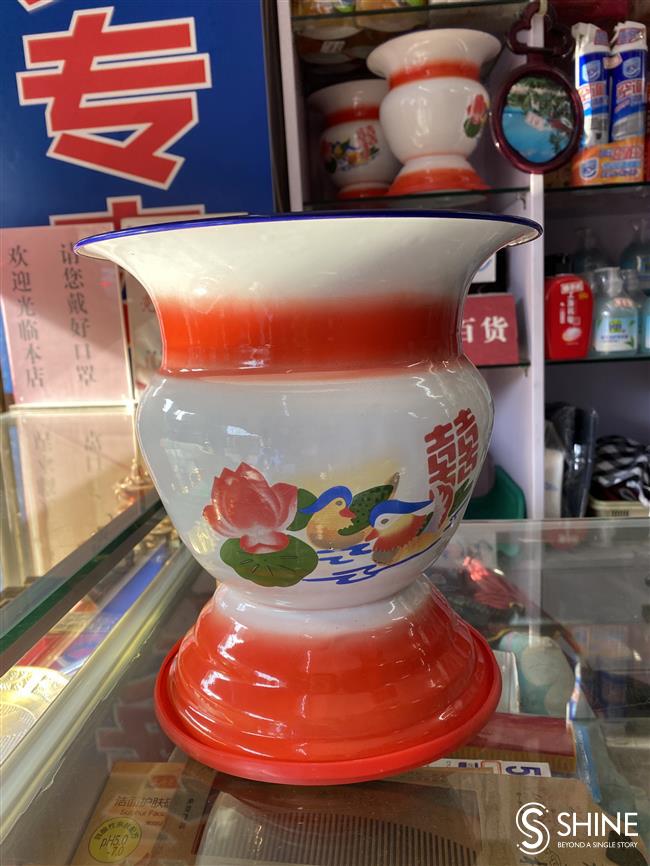 Tanyu that was used as a potty and spittoon in China becomes a lively debatable item recently as netizens express different opinions on whether it can be used to store food.

“I think this is the difference between East and West culture. Although older people living in old lilong (lane) still use it as a chamber pot, it also can be used for a variety of purposes as you like. Yesterday, a customer bought one to use as a flower pot,” said Zhang Lehua, owner of the store. 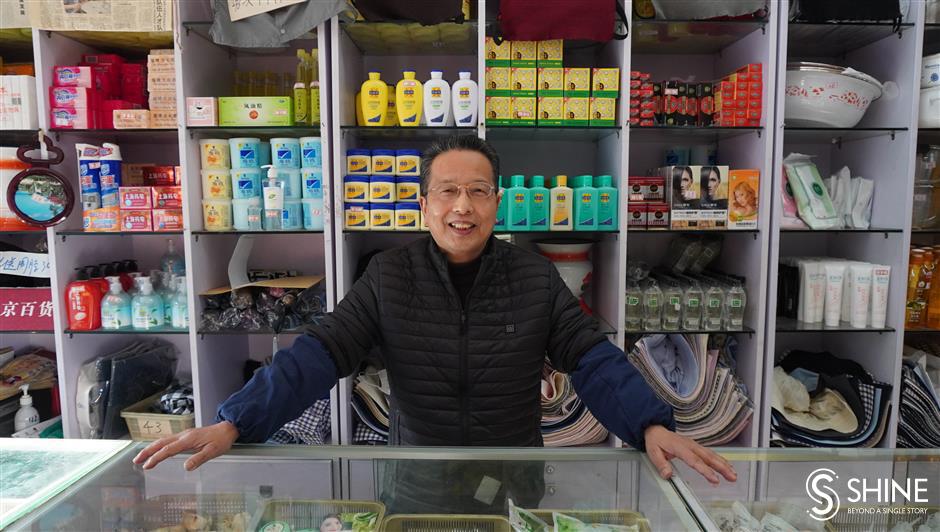 “For me, I think it is acceptable to store food if the tanyu is new,” said a 70-year-old customer surnamed Gu. “In the 1970s, the tanyu printed with the Chinese character xi (meaning happiness) and a couple of mandarin ducks was usually given as a gift to newlyweds, and were filled with Chinese dates, lotus seeds, peanuts and dried longan pulp to mean zaosheng guizi (wish you have a baby soon). So it can be a decoration in a new house.”

There are some luxury choices of tanyu in the store, a copper one is priced at 680-728 yuan. “Some customers buy copper tanyu to use as wastepaper baskets and put them in the living room as a decoration, ” Zhang added.

Many Shanghainese, especially the middle-aged and elderly, went to the store for “fake collars” — a short vest-like replacement for shirts. They were a way for people to save money and still be respectably dressed.

Zhang was wearing a fake collar under his jacket. “When I was young, people were afraid to be found that their shirt was a detachable collar, but nowadays, it has become a kind of fashion accessory, almost all of my customers are proud to show and recommend them to their friends,” he said.

For older people, fake collars were cheap and easier to wash when they got dirty compared to a normal shirt. 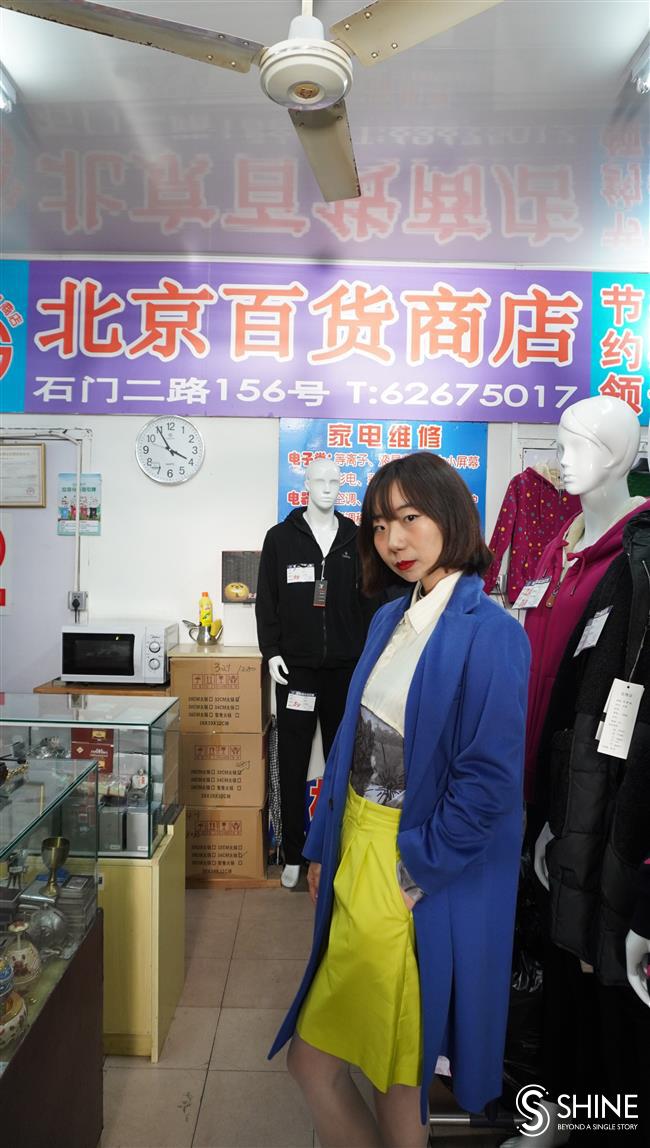 In response to demand, Zhang found a few factories to make collars for him branded with the name of the store. Compared with the fake collars from fashion brands, Beijing Department Store’s fake collars still keep the traditional Shanghai style of the 1930s — there are two rubber bands attached to the fake collar, securing it under the armpits. It was first used by Shanghai actor Zhao Dan in the film “Street Angel,” starring singer Zhou Xuan in her debut role.

Different colors and sizes can be found in the store, even pink and printed ones. Most of the shirt collars are for men, and the size is the same as a normal shirt. If you are not sure about the size, just ask Zhang, who can tell a customer’s neck size just by looking.

Zhang said the cashmere collar he was wearing is a new product that looks like a turtleneck sweater. It keeps him warm in winter and sells for 40 yuan.

The store sells more than 3,000 fake collars a year.

Many other traditional Shanghai goods that have disappeared from department stores can be found in this store.

“Many old products have been updated to a new packaging, but we only sell the original ones. Most of our customers have always bought the same product for decades, if the packaging changes, they would think it’s a fake one,” Zhang said.

He showed the reporter some traditional cosmetic products rarely seen nowadays, including geliyou, or clam oil — a traditional face cream stored inside a clam shell, and touyou — a hair styling product used by Shanghai celebrities in the 1930s. Both are printed with the store’s name. 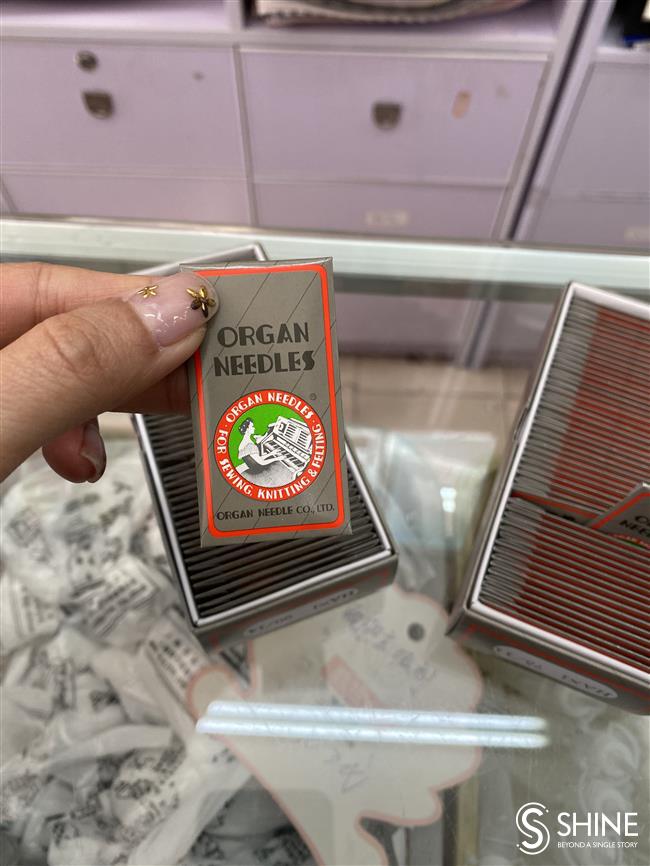 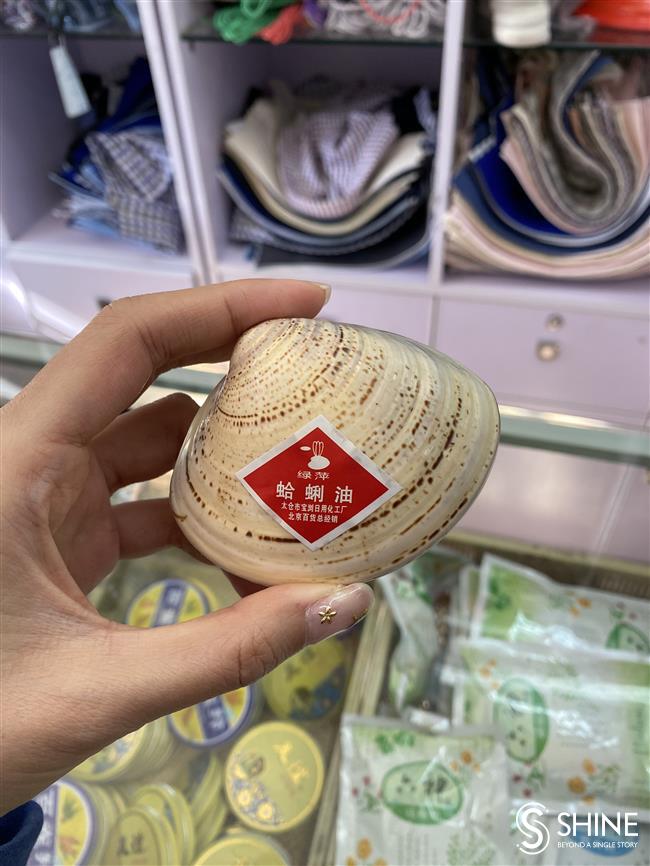 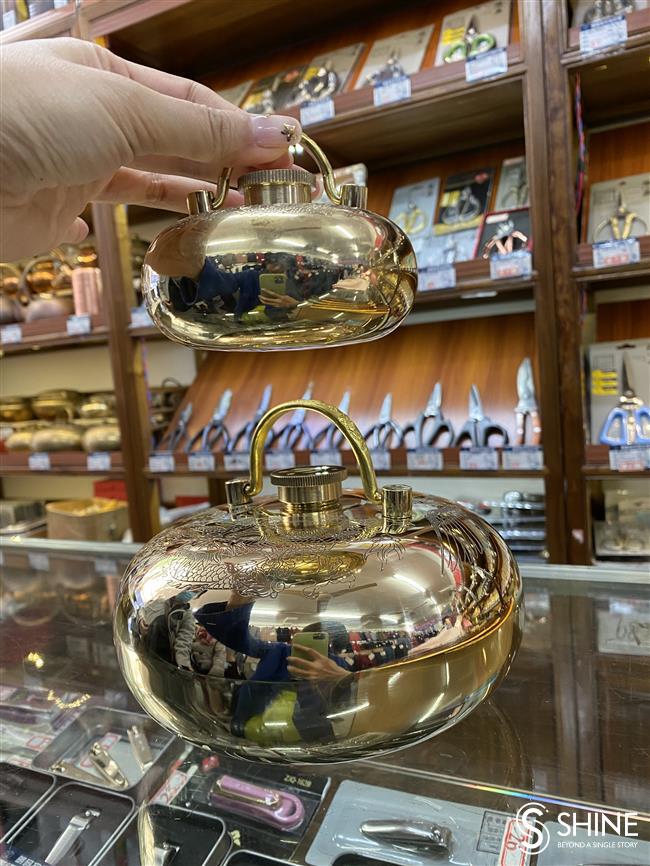 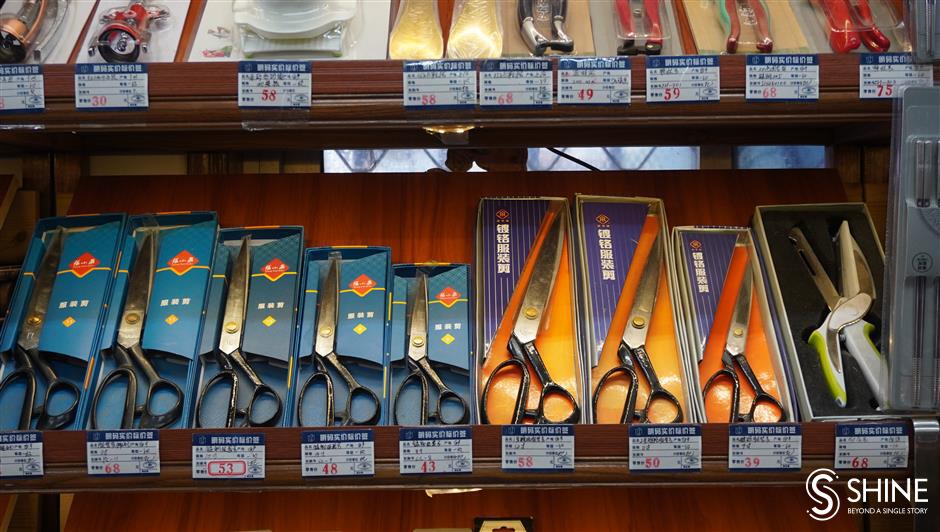 Scissors of different sizes are sold at the Beijing Department Store whose owner is trying his best to keep the store in business.

The reporter tried some geliyou on her hand. It’s a solid texture with a pleasant peppermint scent, priced at 20 yuan.

A staff member recommended “Snow Goose,” a time-honored Shanghai brand of mianmaoshan, a kind of long-sleeved inner shirt. “It’s loose and comfortable for older people at a low price. The brand was founded in 1928,” she told me.

Over the past six decades, the store has moved and downsized. At the beginning the store was called the Jing’an District Department and Repair Shop and had eight branches for things like broken umbrellas, rain boots and mianmaoshan, while selling some small grocery items. However, due to urban reconstruction, only one is left today. In 2002, the only store moved to its current location, and named because of its location.

To many older customers who lived nearby, the store contains all their childhood memories. Although most have moved away, they still drop by from time to time. It’s not only a store, but a place to talk with old friends.

Zhang has been working in the store for 44 years. “The lease contract will expire in May 2022, I hope we can still keep it in business,” he said. 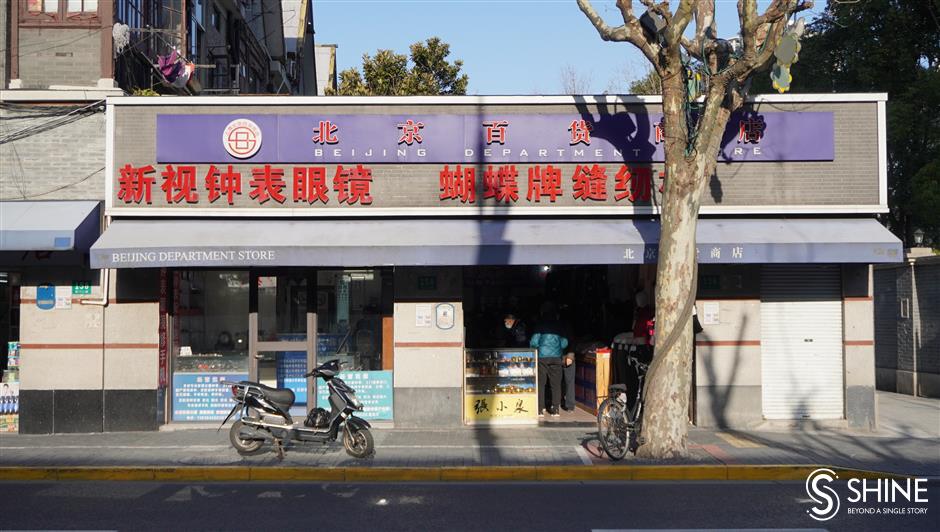 The facade of Beijing Department Store in Jing’an District