Have your mooncake and eat it too

As the Mid-Autumn festival draws near, mooncakes are taking center stage in the city’s food scene.

There are two major schools of mooncakes, the Cantonese style with soft, sugary crust and the Suzhou style highlighting fluffy pastry and succulent filling. The latter is more traditional and popular in Shanghai, and freshly baked mooncakes are always the best.

Packaged Suzhou-style mooncakes are also available in a variety of gift boxes, but the flavors are mostly sweet. The classic pork filled cakes can only be sold fresh.

In the ever-competitive market, finding new ways to sell mooncakes has always been a challenge. Shops and brands are creating new, innovative and sometimes bizarre mooncake flavors in order to stand out and gain the customers’ attention. Unless it’s Guangmingcun, the holy grail of mooncakes in Shanghai that sees six-hour-long waiting lines every year.

This week, we’ll take a brief look at the freshly baked Suzhou-style mooncakes in Shanghai as well as some new ideas.

The crust is composed of two layers of dough rolled with lard, one is called shuiyoupi that uses flour, water and lard, and the other is yousupi that uses no water.

If Xing Hua Lou is the king of wanghong (internet celebrity) qingtuan for the Qingming Festival, then Sunya Cantonese Restaurant (719 Nanjing Rd E.) is the leader in the fresh Suzhou-style mooncake market.

A few years ago, Sunya created the yanduxian mooncake inspired by the traditional Shanghai dish of the same name, a rich pork soup made with Jinhua ham, Chinese bacon and bamboo shoots. The creation was loved by customers. Then Sunya launched prawn and cheese mooncake that received mixed reviews for the East-meets-West concept. In 2019, Sunya is impressing Shanghai customers with a Peking duck mooncake, the filling of which is a proportioned combination of the roast duck meat and skin, all shredded finely and complemented with deep-fried spring onion bits, another element of the Peking duck dish. 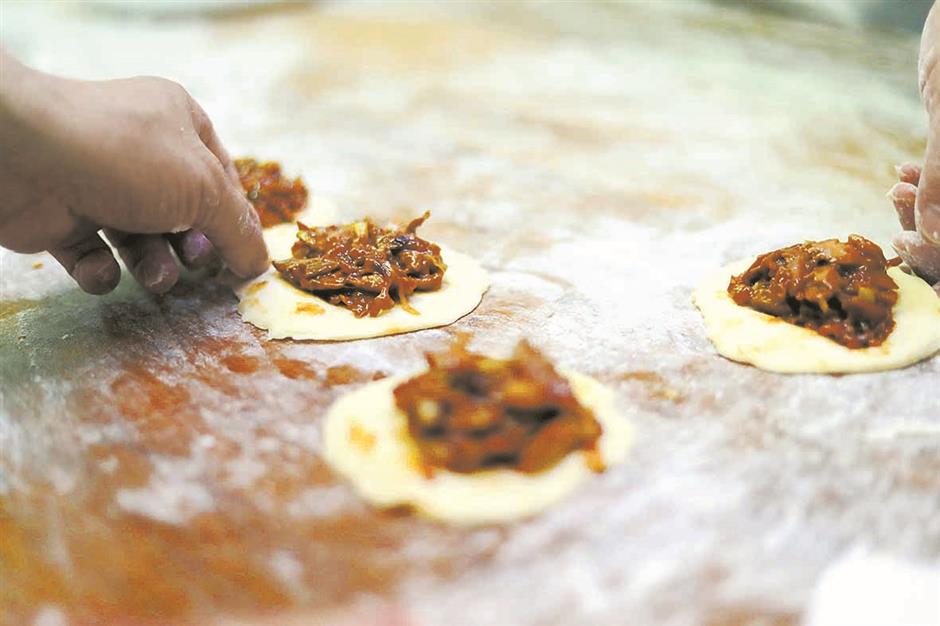 Compared to the prawn and cheese, the innovative new product is more logically put together but still draws attention.

Hema Fresh (online and multiple locations) started the mooncake campaign quite early and aggressively this year, with a few flavors that are really out-of-the-box thinking.

The salmon and wasabi mooncake is a new wanghong that wraps a chunk of boneless salmon fillet and wasabi sauce in the classic pastry crust. There’s also a little bit of egg sauce, fish roe and nori to create a layered flavor. 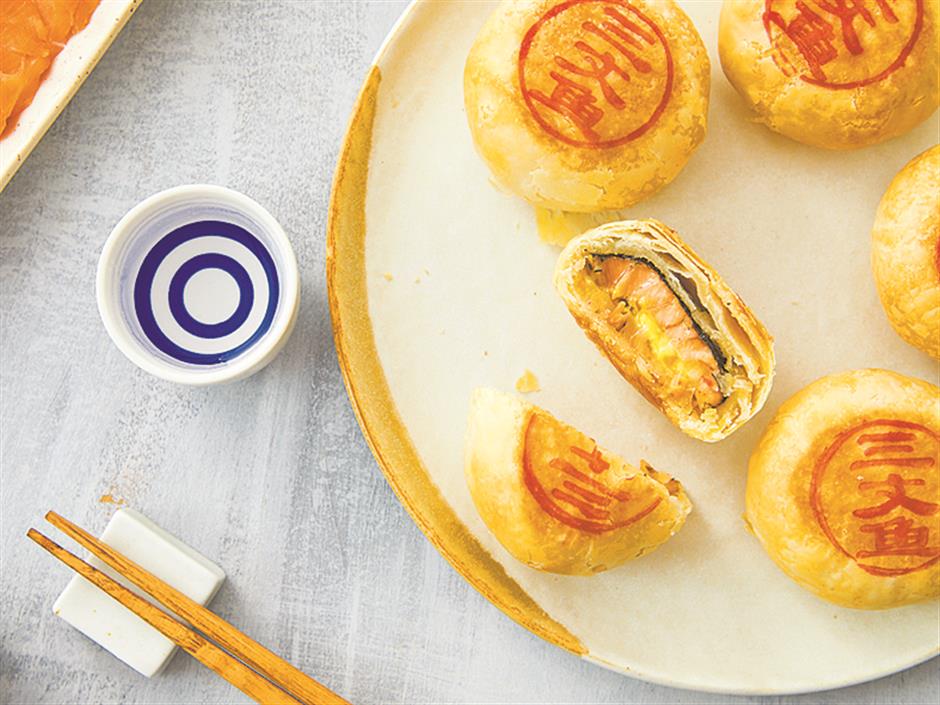 This year, they’ve created a suancaiyu mooncake, which stuffs the Sichuan dish of fish cooked with sour pickles in the puff pastry shell. Regrettably the flavor is not ideal — the fish meat and pickles are densely packed in the shell with little moisture, and it can get a little fishy when the temperature drops.

Time-honored brands aren’t the only option when it comes to buying freshly baked Suzhou-style mooncakes.

Andaz Xintiandi, Shanghai (88 Songshan Road) started to sell fresh pork mooncakes in 2015 in a silver food truck and it has been a huge hit in the city — a product from a five-star hotel at low cost. The lines were long and people used to wait three hours for a box of mooncakes. Since then, Andaz has been selling the fresh mooncakes every year, which are made with fatty and lean pork with their special sauce.

The box the mooncakes come in is traditional and simple, it’s made with environmentally-friendly materials like recyclable corrugated cardboard and hemp rope.

Three flavors are available this year, the original pork mooncake (eight for 50 yuan), the sea salt honey and black pig mooncake (eight for 128 yuan) and a sweet cake with red bean paste and salted yolk filling. The mooncakes are sold daily until the end of October. 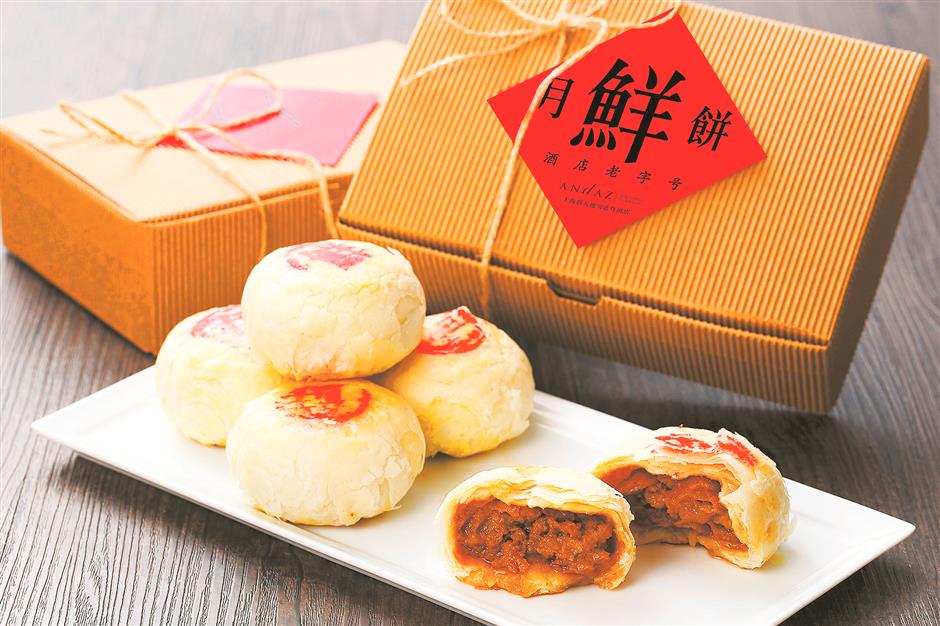 If you are not a fan of pork, Char, the steakhouse of Hotel Indigo Shanghai on the Bund (585 Zhongshan Road E2), has brought back the wagyu beef mooncakes made with Jack’s Creek’s beef. It’s almost like enjoying a high-quality beef burger since the minced filling has strong black pepper and buttery flavor, but with flaky pastry.

This year, there’s also a new truffle wagyu beef mooncake that added a generous amount of black truffle sauce in the beef patty. The regular beef mooncake is six for 98 yuan, while the truffle version is 118 yuan.

Savory Suzhou-style mooncakes are rarely made with vegetarian or vegan fillings. This year, Chinese startup Starfield and a lab from Beijing Technology and Business University will launch a vegan meat mooncake that imitates the traditional pork filling with plant-based protein in September.

It’s a new attempt after the vegan meat hamburger and sandwich trends in the US led by companies like Beyond Meat and Impossible Food.

The vegan meat mooncake uses proteins from soy and other plants to create similar textures, flavors and smells of real meat. They are cholesterol free. 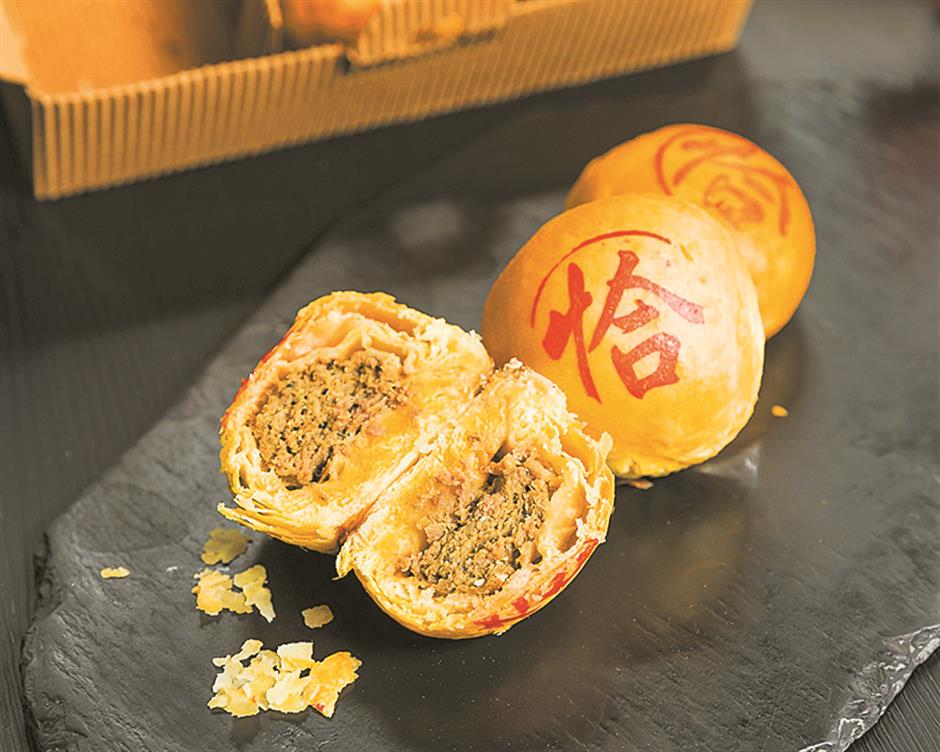