3 fruits to enjoy from peel to flesh

Fall is the golden season of citrus fruit — mandarins, oranges, pomelos and kumquats are arrayed neatly at fruit stands casting their delicious and refreshing aromas.

In China, affordable and abundant citrus fruits are very popular, enjoyed after meals to cleanse the palate, made into all kinds of desserts and beverages, and incorporated in bold-flavored savory dishes as a magic touch.This week, we’ll explore three popular citrus fruits in China and ways to use the fruits from peel to flesh. 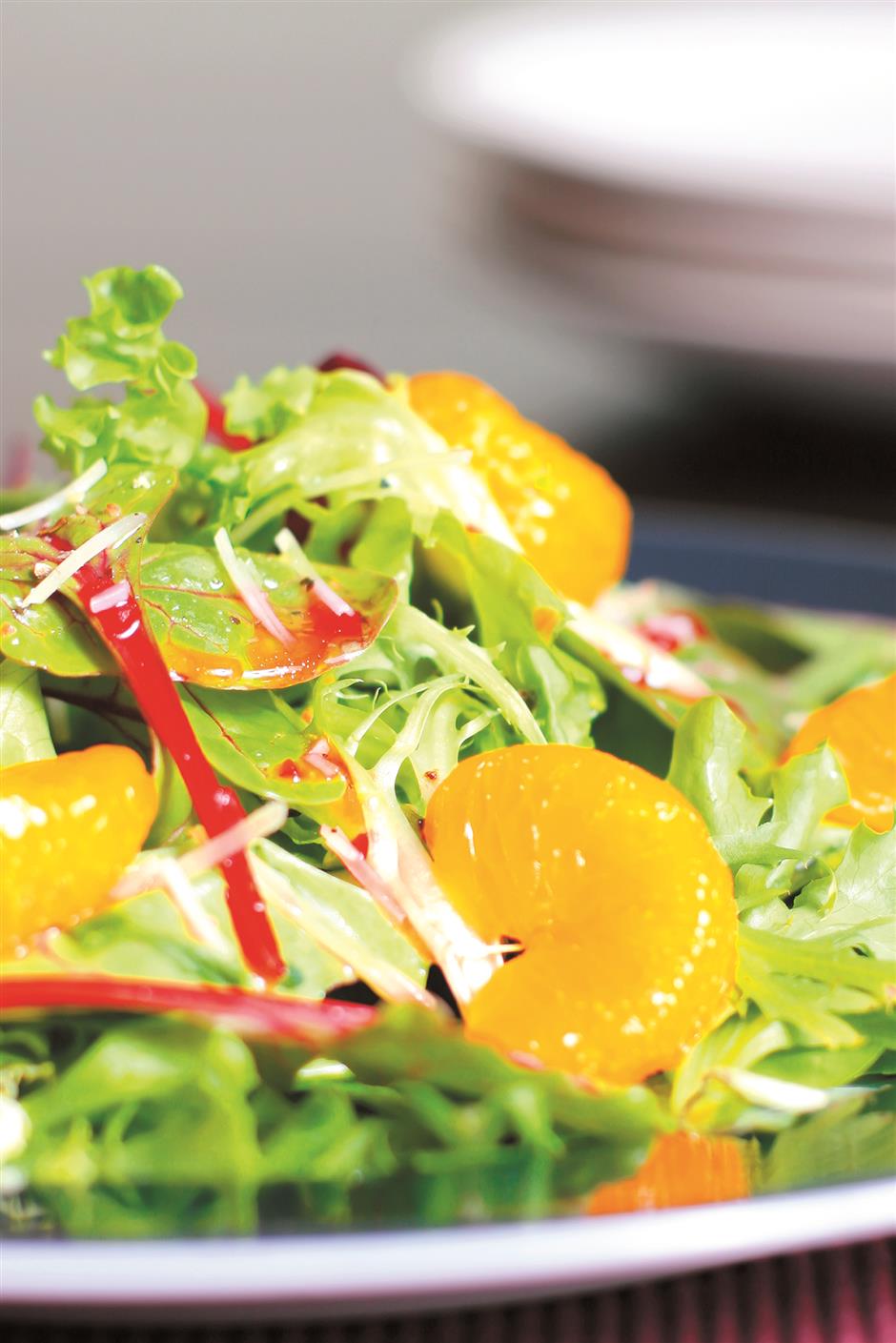 A salad topped with mandarin orange.

Among the varieties of citrus fruits, mandarin oranges, a native species, are well loved in China where the fruit has been grown for 3,000 years, mainly in the region south of the Yangtze River.

Mandarins preserved in light sugary syrup are a sweet treat that many Chinese people grow up eating. The soft flesh is much sweeter than that of fresh fruit, and the syrup removes the unwanted tartness. The sweetened mandarins are also made into jellies.

In Guangdong Province, bright orange mandarins are often placed in front of the door during Chinese New Year, as the pronunciation of ju is similar to ji, or luck. It’s a traditional gift in the holiday season that confers prosperity and good wishes for the coming year.

Buying fresh mandarins, however, is like making a bet, there’s a chance that the fruit will be too sour to eat. There are a few signs to look for when buying the fruit, and some cultivars are sweeter than others, like the varieties of honey mandarins.

The mandarins should have a quite bouncy feel, fruits that are too soft are over matured and lose moisture, the skin should be smooth and glossy, and medium-sized fruits are the best.

The peel of the mandarin is also a versatile and valuable product. The green peel of the young, immature fruit is used in traditional Chinese medicine for its properties of soothing the liver and reducing phlegm, or brewed in tea to boost fresh flavors and tonify the body.

Fresh peel can be sliced and candied by cooking the already boiled peel in water syrup over a low heat. A pinch of salt can further elevate the sweetness. The homemade candy can last a few days in a sealed container. 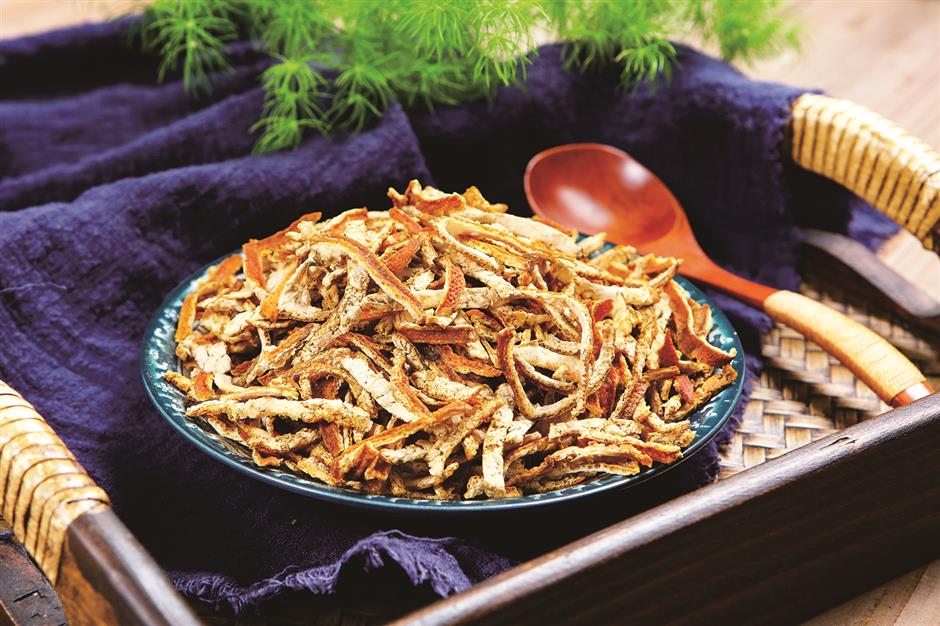 Small glutinous rice pearls can also be stewed in the red bean soup to add texture. With some patience, the dish can be made at home easily.

Pork ribs are an ingredient that welcomes some sweetness in flavor, and aged mandarin peel can add a sweet and sour flavor perfectly, the secret ingredient is used in marinating the ribs overnight before cooking so that the flavors are fully infused in the pork.

In Cantonese cuisine, aged mandarin peel can be stewed in various types of soups for the ingredient’s property of cough relief and moistening the body.

Sweetened aged mandarin peel is a traditional Chinese snack that instantly boosts the appetite and helps with digestion as well.

The whole peel of small green mandarins is preserved to make specialty pu’er tea known as xiaoqinggan. With the flesh removed, the peel of the famous Xinhui mandarin from Guangdong Province serves as tiny bowls to hold high-quality pu’er tea from Yunnan Province. The natural blend gives the rich and full-bodied pu’er tea a strong citrusy and floral taste.

Xiaoqinggan is usually wrapped in paper to preserve the aroma and protect the shape. There are different ways to enjoy the unique mandarin pu’er. An easy way is to remove the lid and infuse the whole product in water after rinsing with hot water first, then pouring hot water and let it steep to make golden-colored tea. Using this method, the flavors of the mandarin peel and pu’er tea are well blended and can last longer.

To highlight the pu’er tea flavor quickly, you can pour the loose tea leaves in the tea cup and then break the mandarin peel in small pieces before steeping everything together in boiling water. This allows a flexible pu’er-to-peel ratio in order to control the level of citrusy flavor, but it won’t last as long.

Making small holes around the mandarin before making the tea is more complicated to do, but it achieves a stronger tea flavor and more harmonious taste. 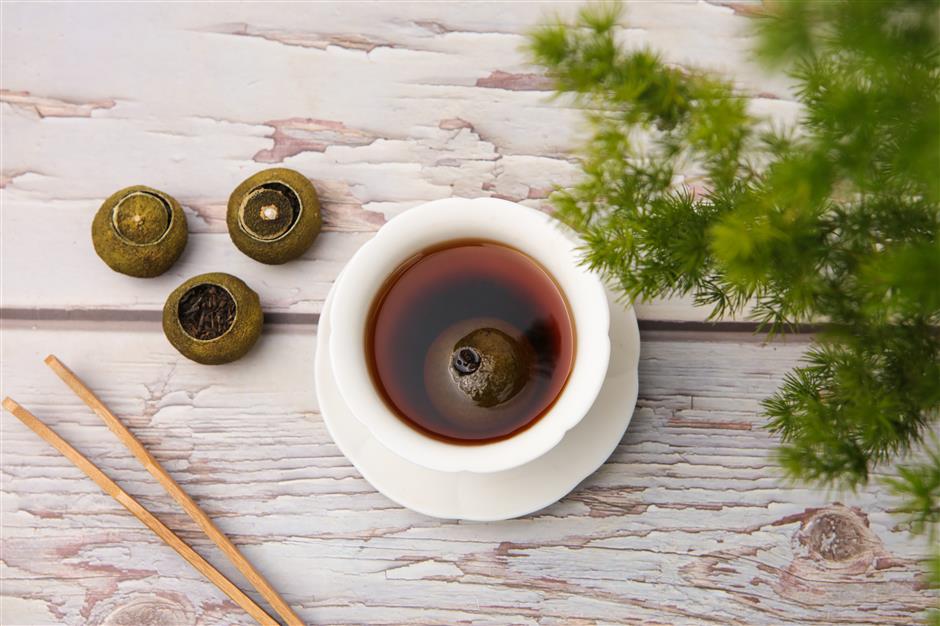 Pomelo, the large round citrus fruit sold in almost every fruit shop in the city, is a low-calorie and high-fiber fruit believed to boost immunity and aid digestion.

Closely related to grapefruit, pomelo has a very thick and tough skin yet it’s not as tart or tangy as the latter. The edible flesh inside has larger pulp that bursts into juice in the mouth.

The flesh of pomelo can be of different colors — white, pink or red, depending on the variety. The red ones are more expensive and generally sweeter than the others.

In Southeast Asia, pomelo flesh is added into salads to boost freshness and the citrusy flavor. The fruit is well paired with seafood such as shrimp or squid.

Although buying a whole pomelo means paying quite a lot of money for the not palatable peel, the outer peel of the fruit is actually very useful.

The spongy white part of the pomelo peel is where the bitterness comes from. Removing it will leave the highly citrusy and chewy skin. Finely slicing and boiling in water would further remove the tangy flavor, and then they can be candied in sugar syrup in a non-stick pan to make a pomelo peel candy.

Honey and pomelo tea is a crowd favorite in South Korea and China, and it can be cooked at home using whole pomelos at a much lower cost.

The thin skin without the white part is peeled off the fruit and then sliced very thinly. After rubbing in salt, wash thoroughly and then drain. Next, the flesh of the fruit is extracted and it’s crucial to remove the tiny seeds. Put the skin and flesh of the pomelo in a pot or electric cooker and then add rock sugar until the texture thickens and the color becomes darker. Honey is then added and stirred well before the mixture is sealed in glass jars. After a few days in the fridge, the honey pomelo tea mix is ready to be used by simply adding water.

The honey pomelo sauce can also be used in cooking, to bring a sweet and sour flavor to meat dishes, or in baking bread and cakes.

In some places, the peel of the pomelo is eaten as a vegetable. Both the outer skin and the white part are sliced and then made into spicy pickles or even stir-fry. The peel can be soaked in water for one or two days to remove the tanginess. 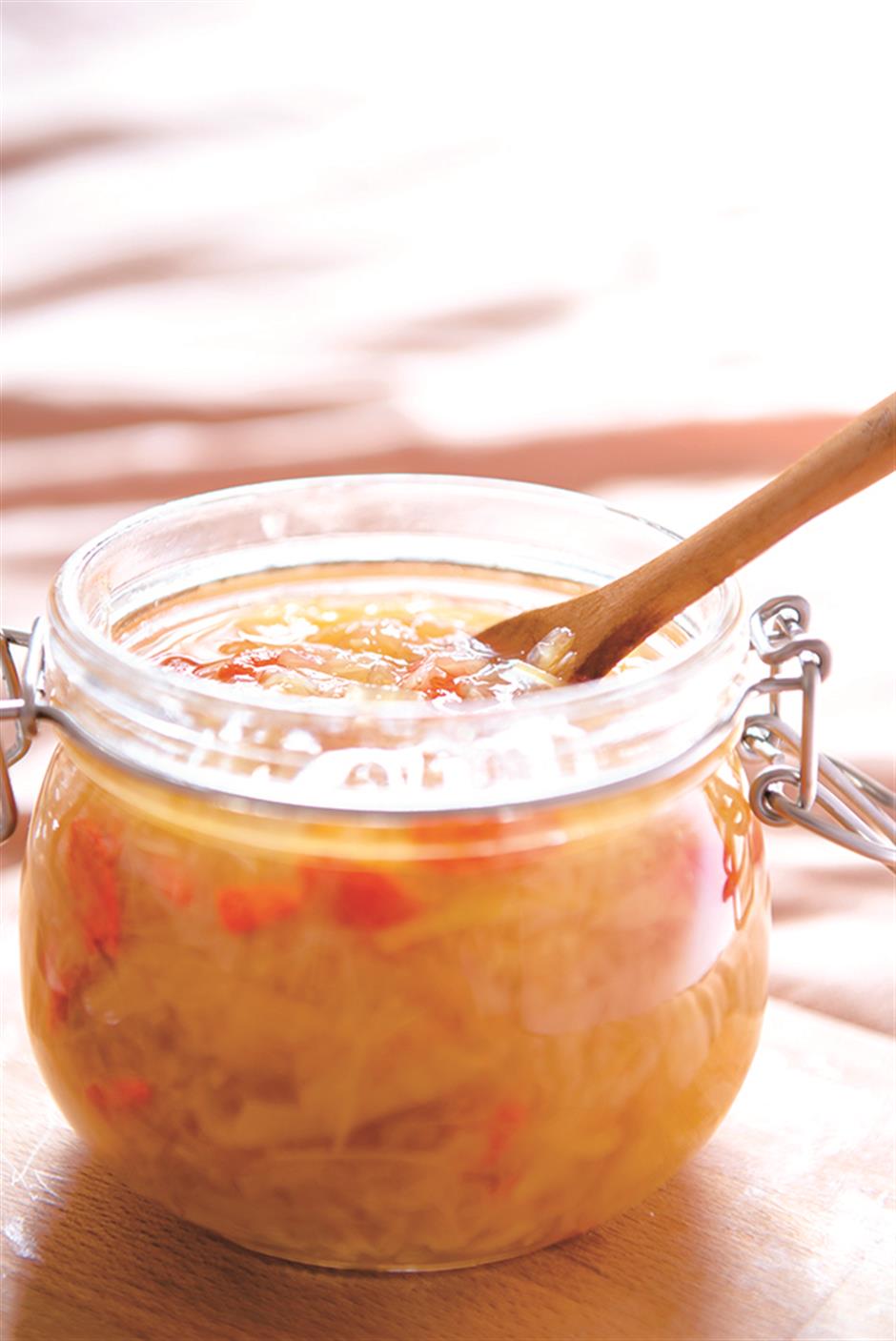 Kumquats, small bright orange-colored citrus fruits, come into season a little later than mandarins and pomelos in late October and early November, and will last until the time before Chinese New Year in late January or early February.

Fresh kumquats can be eaten whole. The peel is thin, fragrant and not as bitter as that of orange or pomelo. The fruit contains high amount of fiber that promotes digestion, and lots of vitamin C. If you are worried about the hygiene of eating the peel, washing them carefully with soda and salt is very efficient.

Kumquats shouldn’t be eaten on an empty stomach, however. The sourness can stimulate gastric mucosa in the stomach and cause discomfort.

Fresh kumquats are cut in half and then infused in water to make tonic drinks.

Candied kumquats and kumquat paste are two sweet creations made by cooking the fresh fruit with rock sugar. They are often consumed to relieve coughs and reduce sputum. Adding a few spoonful of kumquat paste in warm water makes a soothing beverage ideal for fall weather.

Salted kumquats made by preserving the fresh fruit in layers of salt inside sealed glass containers is another cough relief recipe in China. The salty kumquats are steeped in boiling water when they are ready.