So you think you know about rice?

For a rich feudal family in the mid-18th century living an extravagant lifestyle, rice, that everyday staple, was certainly not humble.

In Cao Xueqin’s “A Dream of Red Mansions,” a unique and precious rice was mentioned twice — yanzhimi, which translates directly as rouge rice. The red-colored rice is slightly longer than common white rice and was a tribute product for the imperial court because of its scarcity and value.

In the novel, Grandmother Jia once asked for some congee and was presented with a bowl of congee cooked with yanzhimi. She finished half and asked to share the congee with Wang Xifeng (Sister Feng).

In Grand View Garden where the Jia’s live, there were four grades of rice and yanzhimi was the most precious — only Grandmother Jia had the privilege of enjoying the delicacy.

Yanzhimi was said to originate in Hebei Province, where the strain was especially difficult to grow and had a very small yield. The rice had been a cultural legend in history and first appeared in the “Yutian County Records” during Emperor Kangxi’s reign in the Qing Dynasty (1644-1911). By the time of Emperor Qianlong, grandson of Kangxi, yanzhimi was already an imperial tribute and cultivated in Fengzeyuan Garden. It’s said that Empress Dowager Cixi (1835-1908) also favored congee made with yanzhimi.

A preferred way to cook yanzhimi was congee, since the texture of the rice is harder and a longer cooking time is needed to soften it.

Though Yutian County has been working to bring back yanzhimi, it’s not easy to buy authentic yanzhimi today and some vendors are selling red or purple rice under the name. 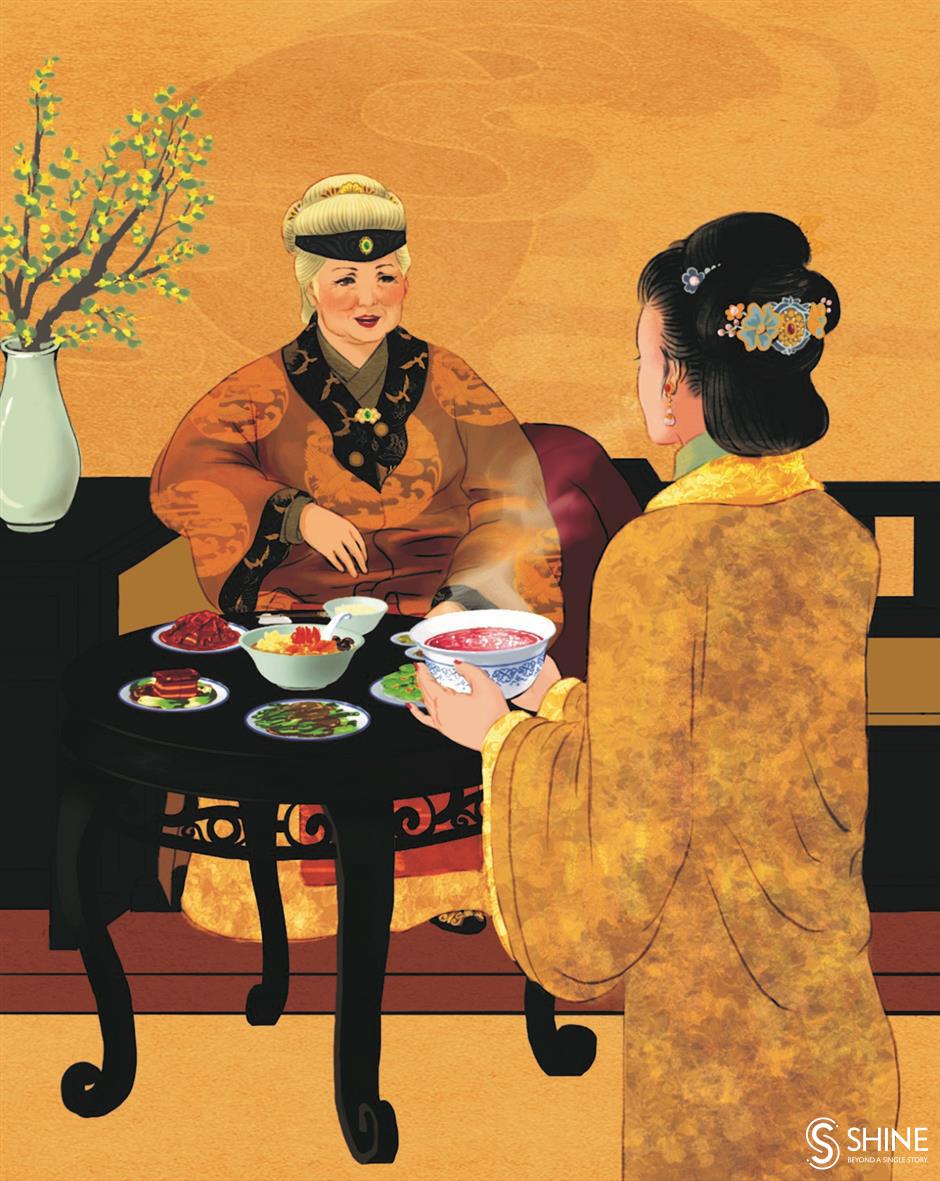 In “A Dream of Red Mansions,” Grandmother Jia is presented a bowl of congee made with the precious yanzhimi, or rouge rice.

Rice is consumed from breakfast to dinner in China. It can be a staple that serves as a fulfilling base for rich stir-fries or a comforting congee in the morning that soothes the stomach.

For something as ordinary as rice, there are multiple varieties which present slight differences in texture and taste. Some people may prefer soft rice that almost melts in the mouth, while others favor the chewier kind. But one trait should be shared by all excellent strains of rice: fragrance.

Rice produced in northeast China is regarded as high quality and delicious, thanks to the fertile black earth, good water and long growth period. Generally, the rice from that region is more aromatic, less sticky and rich in protein. It’s also glossier when cooked. 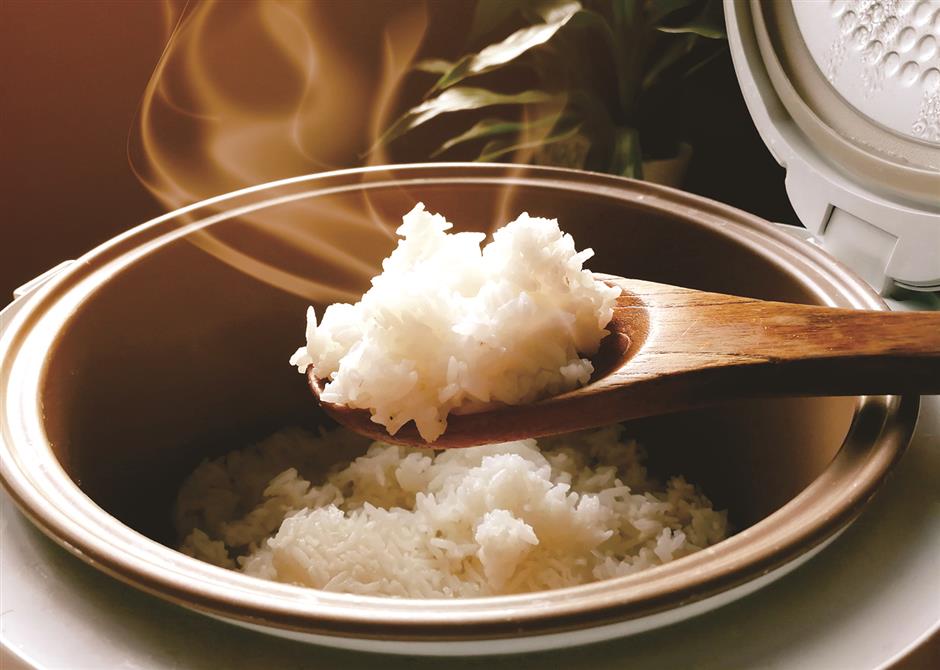 White rice in different regions can have distinct aroma, flavor and texture.

Wuchang rice from Heilongjiang Province is quite expensive, with a flavor that’s stronger than average polished round-grained rice. But, driven by profit, there were scandals involving people faking Wuchang rice by adding essence to low-quality varieties.

Brown rice, which is known as caomi, is gaining popularity in China as part of the healthy diet trend. Brown rice is not necessarily low in calories, but it’s considered beneficial for the body because of its higher nutritional value and rich fiber content. Mixing brown rice with regular white rice to make the everyday staple is a great way to balance the taste if you’re not accustomed to eating brown rice.

There are many more types of lesser-known rice in China, like the Shanlan rice planted in Hainan Province, a coarse grain that’s becoming popular as a healthy and nutritious choice. In the old days, Shanlan rice was poor man’s food as it could grow on dry hillsides. Now farmers are bringing the product to market as a high-end staple. They can sell the rice for five times the price of ordinary rice, according to a story from Xinhua news agency. The rise of Shanlan rice has helped 87 households in Qingsong Village shake off poverty. 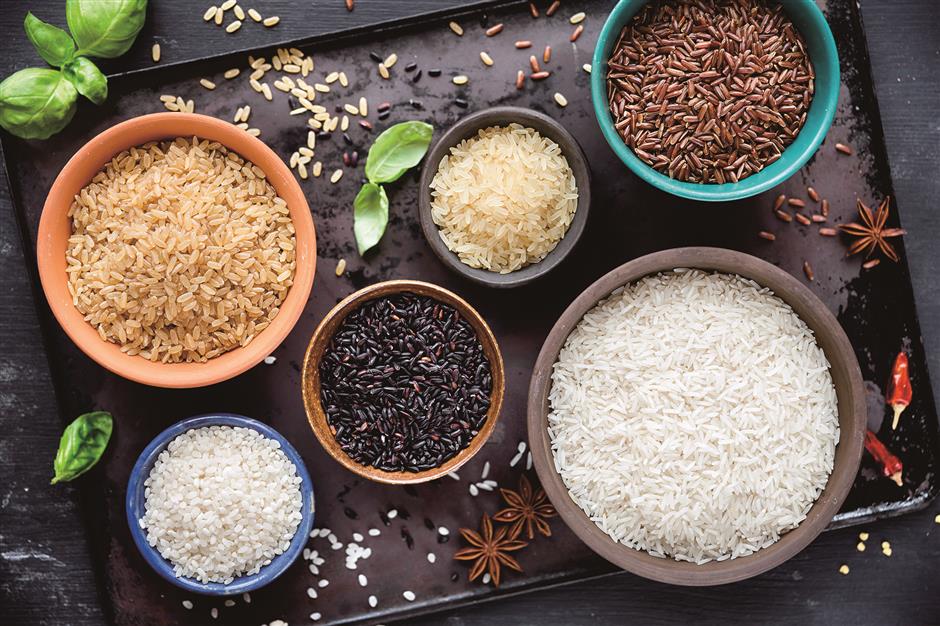 Various types of rice — from the ordinary white to colorful strains — are essential in the Chinese culinary tradition.

Sea rice is an emerging product that aims to produce rice in saline-alkali soil, and one project involves 87-year-old Yuan Longping, the “father of hybrid rice,” who’s developing a high-yield strain that’s saltwater tolerant. The brand Yuanmi, which is the sea rice developed by Yuan, was part of the 2019 Singles Day online shopping spree and consumers purchased more than 300,000 kilograms of rice in first 10 days of presale.

Strains such as yanzhimi, black rice and purple rice have natural colors. Purple rice is especially popular in making sweet dishes and desserts. Steamed purple rice is often added to milk or coconut milk to make a quick dessert that can be served chilled or hot depending on the weather.

Using sweet steamed purple rice as a filling for bread and buns is also a creative new idea, the stickiness of the rice actually working wonderfully with cheese and soft bread.

Xuenuomi, or blood glutinous rice, is a rice in a purple/aubergine color. When soaking xuenuomi in warm water, the red pigment from the skin can slowly dissolve. It’s also widely used in desserts and congee, and a popular local beverage is xuenuomi milk tea that adds steamed sweet rice to the beverage to boost flavor and enrich texture.

Black rice is sometimes called the “black pearl” of rice and is highly regarded as a nutritious staple. The coarse grain is generally cooked as congee with beans, oats and natural sweet ingredients like jujube.

Wumifan (which also translates as black rice) is a folk dish that’s made by staining ordinary glutinous rice with the juice of nanzhu (vaccinium bracteatum) leaves. It’s popular in Zhejiang and Jiangsu provinces and there’s a tradition of eating the delicacy on the eighth day of the fourth lunar month.

Making wumifan is simple — cook glutinous rice in a water made by boiling nanzhu leaves until it turns black. It can be served with sugared osmanthus flowers as a sweet treat.

In Yunnan Province, the Bouyei people would color glutinous rice with different types of natural food colorings to make five-color rice. The color red can be extracted from a plant called honglancao (red blue grass) and yellow comes from the corolla of huangfanhua (Buddleja officinalis). The plants are brewed to make different colorings in which the sun-dried rice is soaked until it is fully infused with the colors. The rice is then steamed and often plated as a colorful wheel.

﻿
Special Reports
ADVERTISEMENT
So you think you know about rice?
Double blend Scotch gets into Indian spirit
Cherries blossom in a glass of Sangiovese
Time to make the most of mussels
Marrakech, an exotic spice of culinary life
Hand mixers boom hits the nation
Serving up an authentic taste of Singapore
So you think you know noodles?
Michelin stars for restaurant's Taizhou cuisine focus
Restaurants find ways to adapt to outbreak
EXPLORE SHINE