"Summer Wine" is a classic song produced by Lee Hazelwood and sung by Nancy Sinatra. The song was released in 1967 as a B-side addition to their single Sugar Town. Two factors that made the song a hit: its haunting melody and suggestive content.

The most famous verse in the song is "Strawberries, cherries and an angel's kiss in spring, my summer wine is really made from all these things." Rolling off the tongue of The Chairman's daughter, these hauntingly melodic words also perfectly describe this week's summer wine pick. In fact, father and daughter were huge fans of Italy's most famous red wine grape.

Sangiovese is an ancient grape that many believe is a mutation between native varieties from the southern Italy region Calabria and the Tuscan Ciliegiolo grape. More recent DNA tests indicate genetic relation to several other native Italian varieties.

The earliest cultivators were the Etruscans who lived in central Italy in pre-Roman times. Despite having a culture that lasted only a few centuries, the Etruscans were the original gourmets of Italy who had a passion for hedonistic multi day and night wine and food feasts.

The modern name of Sangiovese derives from the Latin word sanguis Jovis or "the blood of Jove" and most likely refers to the ruby-red color of wines made from the grape. The first documented mention of Sangiovese was in the late 16th century by the writer Ciriegiulo and by the Renaissance the grape was well-established in many parts of Tuscany and neighboring regions. 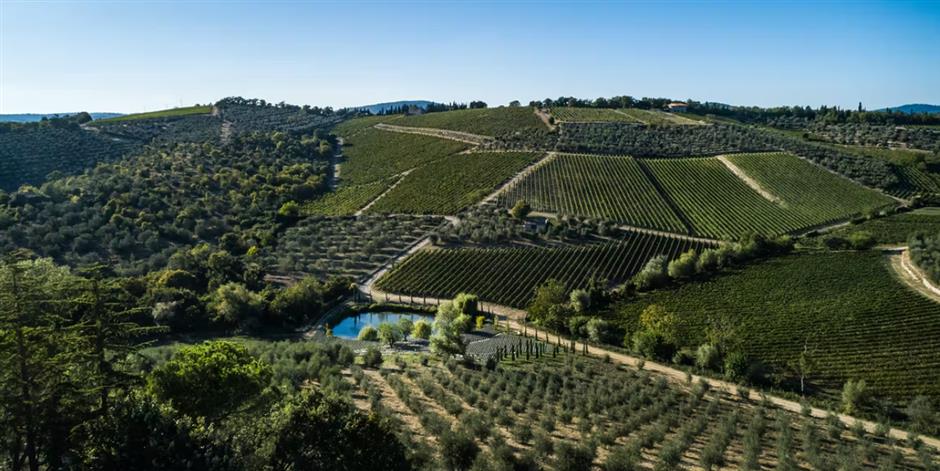 Today the most famous manifestation of the grape is Chianti. With apologies to the more recent highly acclaimed wines of Brunello and some Super Tuscans, Chianti remains the heart and soul of Tuscan winemaking.

One of Italy's most food-friendly red wines, Chianti has all the attributes in Sinatra's famous lyrics; namely, strawberries absolutely, cherries in abundance and an angel's kiss in the form of floral aromas.

The first mention of Chianti was in a 14th-century Mazzei family purchase document. In all likelihood the first Chianti-like wine was made centuries before. Early versions of Chianti ranged for light rose wines to more brutish reds, then in mid 19th century the great Iron Baron Ricasoli created the first official formula for Chianti.

The Baron stipulated that Chianti wines should be mostly Sangiovese with the local varieties Canaiolo and Malvasia also allowed. The great grandson of the Iron Baron, Francesco Ricasoli is still making excellent Chianti, Chianti Classico and other wines today. But the road to success has not been easy.

After the late 19th century phylloxera epidemic and the two World Wars in the first half of the 20th century, many producers emphasized quantity over quality and bottled their wines in squat straw-bound bottles. Italians called these bottles fiasco, which according to the dictionary appropriately means a complete failure.

The damage to the Chianti brand was severe. However, all of this started to change in 1966 with the implementation of the DOC regulations and since then the quality of Chianti wines has improved dramatically. In 1996 Chianti wines achieved the coveted DOCG status.

Over the past few decades the best Chianti producers have been using better-quality, lower-yield Sangiovese clones that are more suitable for their soil and climate and have upgraded their overall winemaking process. According to Italian wine regulations, any wine labeled Chianti must contain at least 75 percent Sangiovese and may contain up to 10 percent Canaiolo grapes or 15 percent of other authorized grapes like Cabernet Sauvignon and Merlot. A growing number of winemakers craft their wines from 100 percent Sangiovese grapes.

Today, Chianti is by far the largest wine region in Tuscany. The quality pyramid starts with light and fresh Chianti DOCG wines, then more serious Chianti Classico and Riserva level wines, then at the apex are Gran Selezione wines. Wines of this latter quite new category are among of Italy's greatest red wines.

The vivacious nature of many Chianti wines, especially young examples, make them very food friendly and natural partners to many of our favorite summer dishes. For example, dishes with tomatoes or tomato sauces are perfect Chianti partners as the intrinsic acidity of the Sangiovese variety naturally mirrors the acidity in the tomato, creating an overall rhythmic harmony on the palate.

The healthy dose of acidity also makes the wines fine companions to a wide range of elegant seafood dishes like grilled tuna, salmon and cod or many fried fish. More substantial and complex Chianti Classico, Riserva and Gran Selezione wines are natural partners to well-aged hard Italian cheeses, grilled and roasted meats as well as ideal wines to enjoy with our beloved Beijing Duck.

Two of my all time favorite Chianti producers are Castello di Ama and Barone Ricasoli. Not only do they make superb wines but they are two of Italy's most stunningly beautiful historic estates. Other recommended producers are Mazzei, Strozzi, Carpeneto, Ruffino and Castello di Querceto. Basic Chianti wines should be served chilled or about 14 degrees Celsius while Riserva and Gran Selezione wines need an hour or more breathing time and should be served no higher than 18 degrees Celsius.

Not sure about you, but this week I'll be joyfully surviving the sweltering heat by sipping Chianti wine with a bountiful summer BBQ spread while listening to vintage Nancy Sinatra tunes. Angel kisses indeed.