If you want to see Shanghai through the eyes of its older citizens, Metro Line 8 will show you the way. The line takes you to laochengxiang, literally “old towns,” where even the most experienced cabbies can get lost and traditions of the past are preserved. Interested in an ancient remnant of the city wall, magic mirrors, secondhand books, bullfrog noodles and the best dumplings in town? Hop aboard!

For a long time, distortion mirrors were a draw card at this 100-year-old entertainment venue.

The site was closed in 2003 for a 14-year restoration but it lost much of its attraction after the makeover. Still, memories of the original site linger.

In the 1930s, Dashijie, a blend of Western and Chinese architectural styles, was a very popular weekend destination for families.

The site, at the time owned by a mob boss, staged opera and acrobatic shows, screened the latest Hollywood movies and introduced thrilling rides. Its 12 distortion mirrors were a novelty never seen before in the city.

After it reopened in 2017, the site never captured the magic of the past.

However, it did become a landmark where visitors could enjoy local folk arts and shows such as acrobatic performances.

Parents nowadays take their children to Dashijie amid memories of their own childhoods. 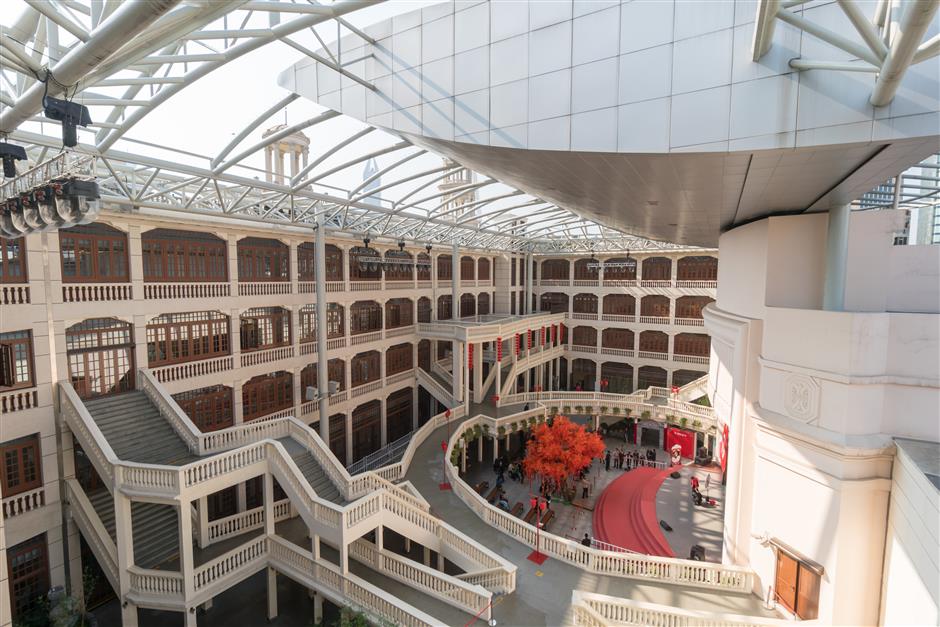 Shanghai Great World has been restored to its original style, including the central theater.

The Haling Bullfrog Noodle had been operated for years before it suddenly became an Internet sensation. After that, business soared and the shop developed to a franchise chain.

The eatery is best known for heaps of bullfrog meat piled on noodles. A sauce of spring onions and ginger flavors the meat and saturates the al dente noodles.

Many visitors who go to Zhaojialou Ancient Town in Minhang are more interested in cuisine than canals. The old watertown is famous for its mutton and pork knuckles. But beyond food, the 800-year-old town has much to offer.

It’s become a tourist destination only in recent years — a living museum, of sorts, of the ancient lifestyle in outlying Shanghai. 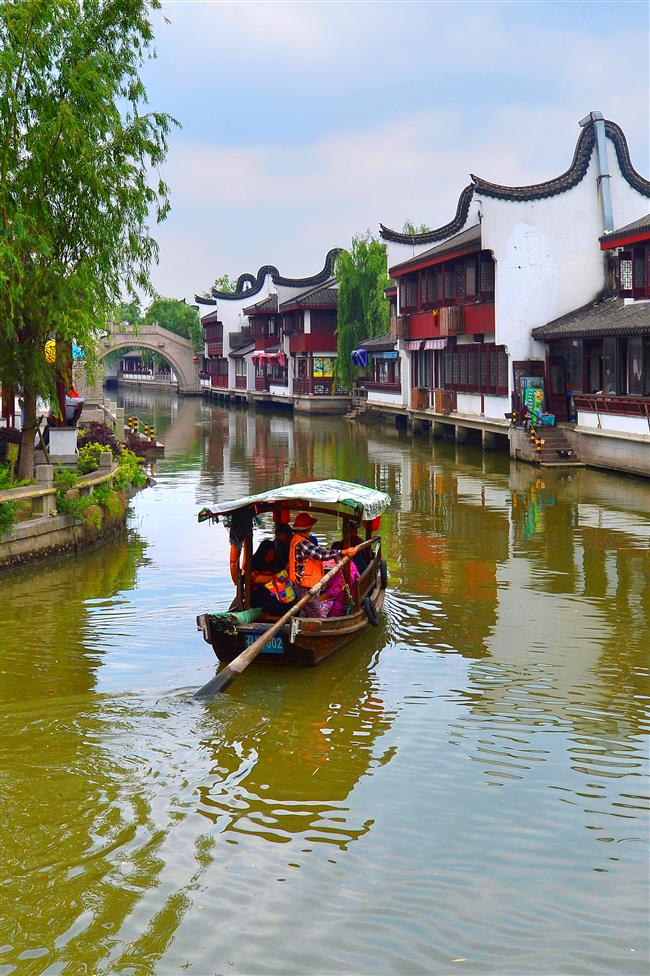 Liyuan Garden is a must-visit spot. The garden has 99 buildings constructed during the Qing Dynasty (1644-1911) and most are still in good condition. Some of the buildings have been modified into small museums of local history. One of them is dedicated to Qin Yubo (1296-1373), a magistrate for what was then Shanghai County. Many people may not know he is the god worshipped in the City God Temple near Yuyuan Garden. Zhaojialou was his hometown. After his death, the emperor canonized him as the guardian god of Shanghai.

Although Zhaojialou Ancient Town is best known for mutton and pork knuckles, the most popular eatery in the town is Wuyouxian Soup Dumpling. Though it is one of the most expensive soup dumpling shops nowadays in Shanghai, loyal customers still drive for an hour from downtown to indulge in a steaming basket of dumplings.

Crab roe and meat dumplings are the most popular.

The shop makes various types of vinegar sauces for dipping different varieties of dumplings. The red bean soup is recommended for dessert after a heavy dumpling meal.

In the history of Chinese literature, author Lu Xun (1881-1936) occupies a special place. Every schoolchild reads his works and memorizes his most famous words.

Luxun Park in Hongkou District reveals much more than textbooks about this celebrated writer, essayist, poet and literary critic. The park is built around the author’s grave, near the area where he lived most of his life.

A museum in the park displays around 20,000 items related to Lu’s career and life. Many recount how he fought for freedom and social justice through his sharp style of writing.

Around the park are other sites of significance in the author’s life. One of them is the former Uchiyama Bookstore, now operating as a bank branch. 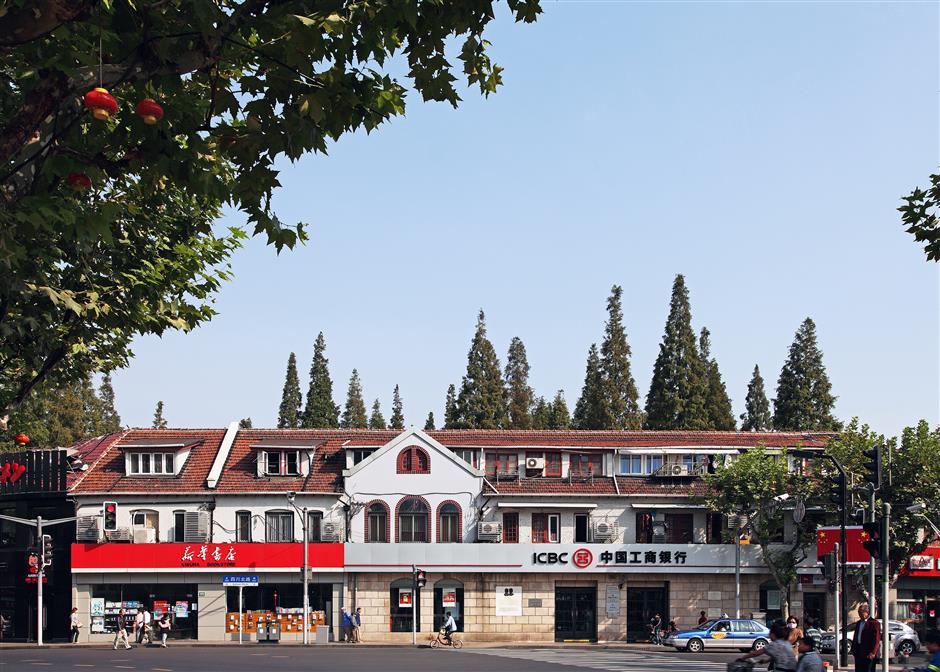 A small section of the bank is devoted to a museum recording the history of the building.

The original bookstore, operated by Japanese couple Kanzo and Miki Uchiyama, opened in 1929. It initially sold Christian books, expanding later to medical tomes and books promoting progressive ideology. When Lu was hunted by agents of the then Kuomintang government, he sometimes hid in the bookstore and was protected by the couple.

On the second floor of the bank, visitors can learn more about China and the Japanese during that turbulent era.

Tenderloin kebab, deep-fried rice cake and deep-fried chicken fillets have been favorite after-school snacks for children for decades, and Xiong’s Sixty-Thousand Kebab is now one of the most popular kebab chains in the city.

The juicy, tender and well-seasoned tenderloin pork is highly recommended.

The Confucius Temple and Dajing Tower

The oldest Confucius Temple in laochengxiang has a history of more than 700 years, but its current layout is credited to the Qing Dynasty.

Confucius is regarded as the teacher of all teachers, leading many people to believe that his blessing will help students taking important exams. That’s why the temple is always super busy every year just ahead of college and high school entrance exams. Parents go to the temple to buy wishing plaques or amulets for their children.

Some schools even organize trips to the temple for students to write their wishes on plaques and tie them to a big tree in the temple yard.

Confucius was also a great scholar, and that legacy lends itself to another activity at the temple. A secondhand book market started up there about 20 years ago. Originally, it was held four times a year, but it was so popular that it became weekly.

Every weekend, up to 9,000 people browsed the more than 200 booths at the market, looking for books often out of print now.

The market now is falling victim to the digital age. Many people now find the old books they want online. The market has remained, however, but the number of sellers has declined to a handful of booths that attract mainly older browsers.

No matter how sparse their numbers, sellers and buyers hold the market dear to their hearts. 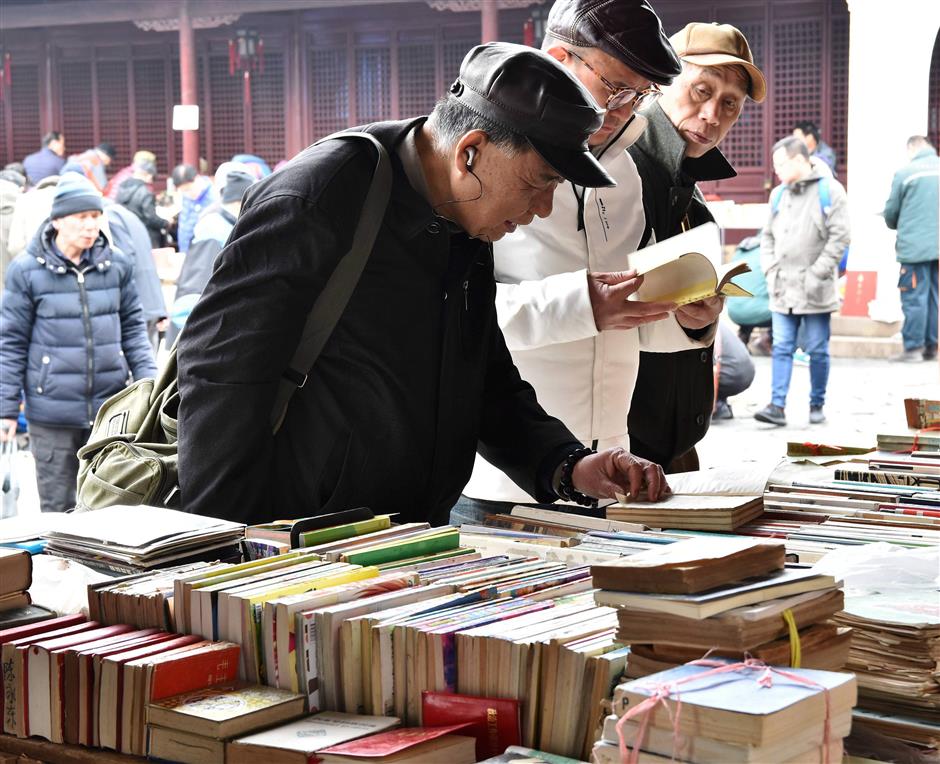 Not far from the temple is an isolated piece of wall that preserves tradition as much as the book sellers. The 30-meter stretch of wall was once part of the city’s larger fortification. Built during the Ming Dynasty (1368-1644), it is the only section of the wall that remains. A temple called Dajing Tower was built at the wall to worship Guan Yu, a general of the Three Kingdoms period (220-265).

Although the temple has been rebuilt many times during its history, the wall itself was never destroyed. There are still repair marks on the bricks left from the Qing Dynasty. 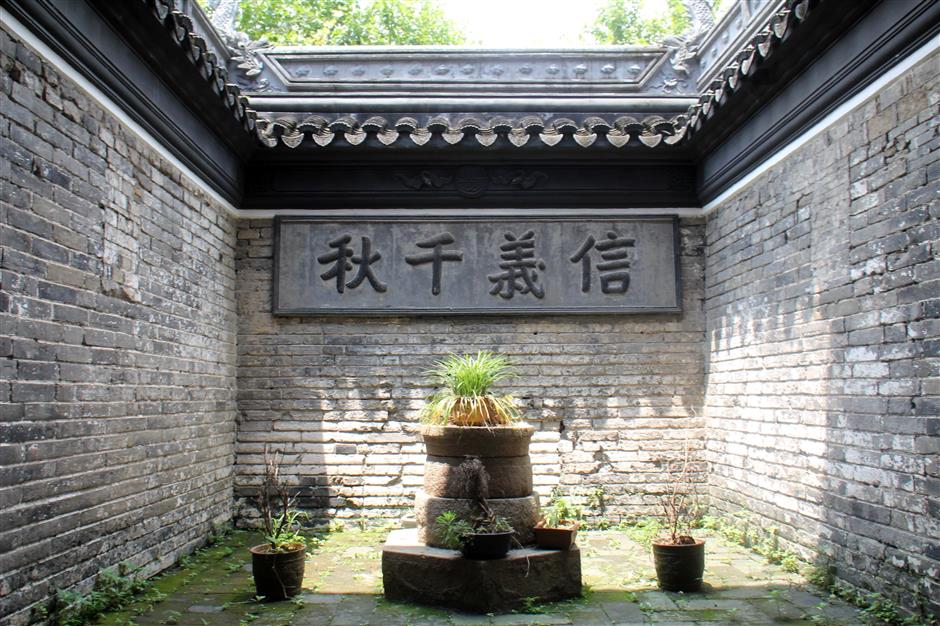 Confucius Temple Food Street provides all the popular snacks of Shanghai, including takoyaki balls, kebabs and fried rice with vegetables and ham.

People living in the vicinity particularly like a small milkshake stall that has been there for more than a decade. The milkshakes there are quite distinctive, a sort of modified version of a sundae.

Customers are offered a choice of toppings for the milkshake, including tapioca balls and coconut jellies.