Getaway amid a dreamscape of rice paddies

Neighboring Zhejiang Province has diverse geography, from plains to high mountains. Most visitors to the province don’t get beyond the attractions of the capital Hangzhou. They are missing much.

The Jinhua-Lishui-Wenzhou Railway takes passengers to less visited areas in the south and west of the province. From Lishui Railway Station, the line extends to Shanghai.

Lishui is really a spot worth a visit.

One of its most attractive scenic sites is the 1,500-year-old mountain terraced landscape called Yunhe Terrace. Farmers grow mainly rice on more than 70 tiers of land, rising from 400 meters to 1,200 meters. Many farmers used to work in a now closed silver mine.

The terrace is called “the beauty of four seasons,” but the most photographed time of the year is probably springtime. That’s when seasonal rainfall gives the whole landscape the appearance of a huge mirror that fell from surrounding mountains and broke into shards. They glitter under the sun, reflecting blue sky and white clouds.

In summer, myriad shades of green blanket the terraces, like a fluffy blanket.

In autumn, green turns gold and zephyrs create waves across the rice fields just prior to harvest. And in winter, snow tucks the terraces to sleep for another year. 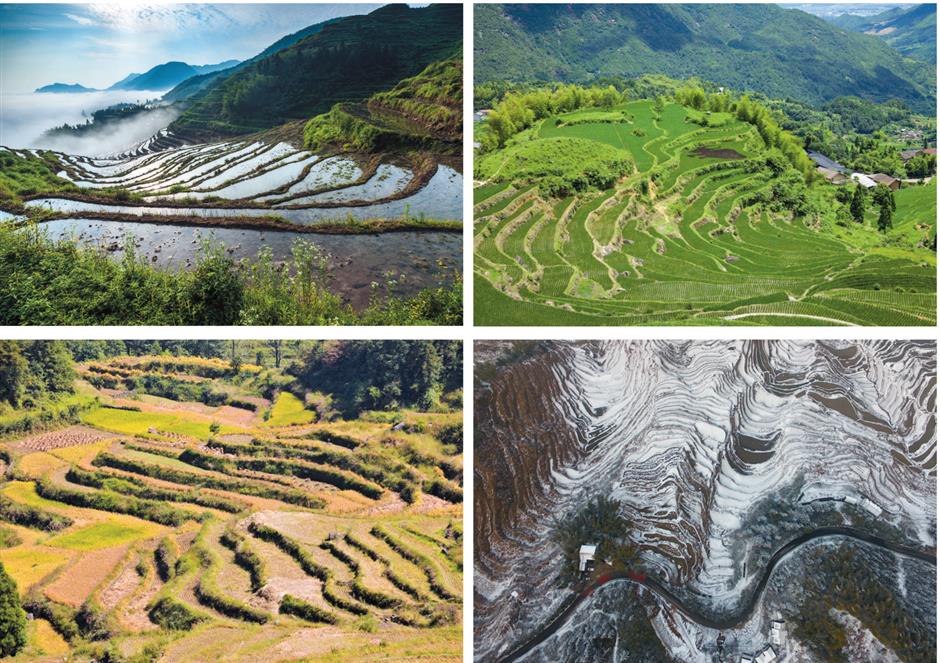 The swirls of Yunhe Terrace in Lishui create breathtaking scenes of beauty in all the seasons, attracting photographers from China and abroad.

The terrace is as much a joy to visitors as it seems to be to local residents. Many of them get up at around 5am — hours before they are due to start work — to watch the first rays of the sun cast a spellbinding glow across the terraces.

Li Cunren, a ticket inspector and amateur photographer, takes pictures of the terrace every day and shares them on his WeChat Moments. His friends call him the “recorder of the terrace.”

“My home is in Zhaoshan Village near the terrace, and I have been watching it since childhood,” he says. “But funnily enough, I didn’t fully realize its beauty until I met some photographers who were fascinated by the views. One of them gave me a camera, and after I learned how to take pictures, I realized how blessed I am to be living here.”

Li recommends that early-bird visitors find accommodation in his village.

Just a decade ago, that would have been a pretty unappealing invitation. Today is different. The village has undergone renovation to transform its shabby yellow mud walls and dingy wood cottages. Many villagers now run guesthouses there.

Although accommodation may be quite basic, a stay there captures the rustic, natural environment. Some rooms face the terrace directly, allowing visitors to watch the sunrise from their balconies. Many guestrooms have en-suite bathrooms, TVs and free Wi-Fi. A single room costs about 100 yuan (US$14).

Meals provided by the guesthouses use fresh, organic ingredients, usually from owners’ home gardens. Newly harvested tomatoes are especially recommended. They give extra flavor to the soups served for dinner.

If visitors speak Chinese, they can negotiate charter transport with the owners. Several guesthouses have reasonably priced vans or cars to take visitors to observation sites that overlook the terrace from different angles.

Guesthouse owners may also provide transport to the area’s now defunct silver mine, which is called Silver Valley, or Baiyingu.

A village in the valley called Kenggen has been in existence for more than 800 years. Most of its buildings are now about a century old. The village has such a primitive look that it could be mistaken for an abandoned site.

The booming tourism of the terraced landscape doesn’t seem to have affected Kenggen at all. Cobblestone passageways and old yellow-stone houses haven’t changed since they first appeared.

A small bridge that was once the only access to the village was built hundreds of years ago during the mining heyday. Locals cherish the bridge, which crosses an often torrential flow of water, as much as their homes.

After reaching Lishui Railway Station by high-speed train, visitors can take a bus to Yunhe County, where buses to the terrace site are available.

Other sites worth visiting in Lishui

Tales go that the Yellow Emperor, one of the Chinese deities and ancestors, practiced alchemy on the peak.

After he crafted an elixir of life with a giant ding, or ancient sacrificial vessel, he summoned a red dragon and ascended to heaven. The ding he left became a lake and thus the peak was named Dinghu, which literally means the lake of ding.

The landform is actually a form of karst. Similar stone pillars can be found in nearby mountains, accessible by a hike of one or two hours.

Visitors can take a high-speed train to Jinyun West Station on the Jinhua-Lishui-Wenzhou Railway, and from there take a bus to the scenic area.

The first thing that visitors notice at the resort is the number of people sketching and painting. The local government has created a center for art students and photographers in the area.

The scenery in the resort is indeed worthy of artworks. Built around an ancient weir more than 1,500 years old, the area itself resembles a Chinese ink wash painting: small rafts drifting on clear waters, an ancient camphor tree shadowing the river bank with its huge crown, and morning mist shrouding tranquil villages of old houses.

Unless you can stand crowds, it’s best to avoid peak seasons. Otherwise, the tranquil scenery of the resort may be marred by jostling rafts full of tourists. Or put another way, it can feel like a painting splashed with extra, unnecessary ink.

Visitors could take a bus from Lishui Railway Station to the resort. 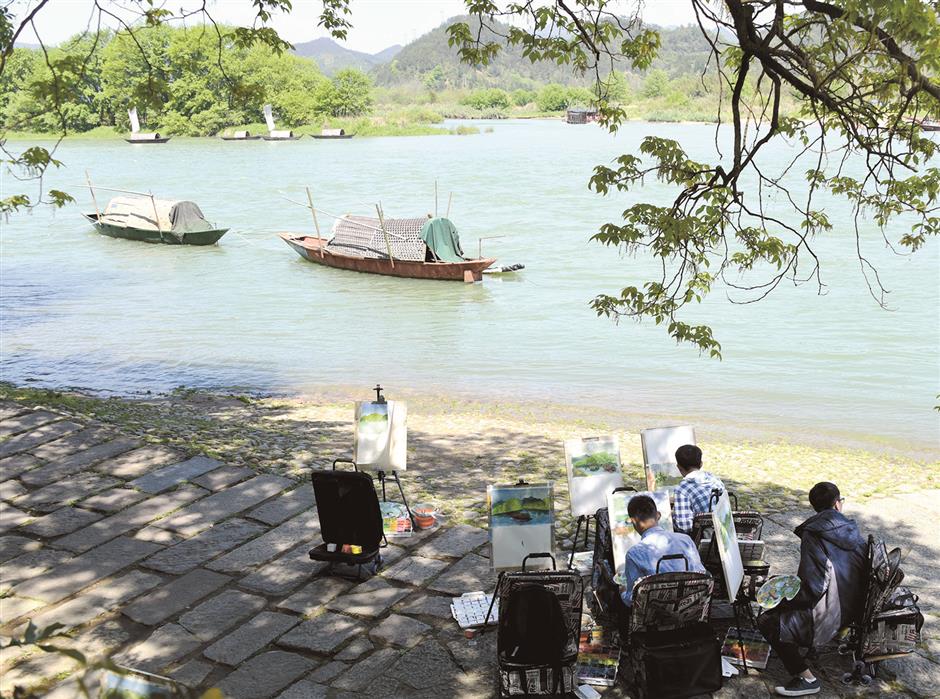 Art students sketch and paint on a riverbank in the Guyan Scenic Resort.

Special Reports
ADVERTISEMENT
61906
,
For a spring break, take a stroll in our beautiful backyard
Been there, done that? Not at these quirky sites
B&Bs in rural areas add artistic flourish to farmland holidays
Xiangshan awakens with arrival of spring
Hangzhou abounds with festival activities
A step back in time in any language in Songjiang
Fudan University founder's home is renewed
Mount Chaoshan celebrates plum blossoms with cultural activities
All aboard for a culinary excursion that will tantalize the taste buds
An excursion that gives us something to think about
EXPLORE SHINE