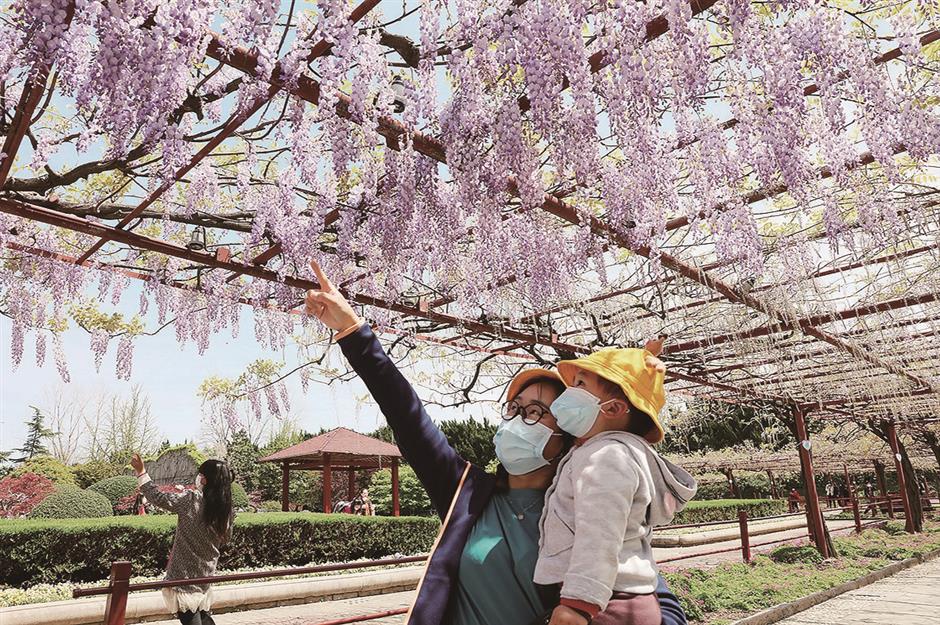 A mother and her child are delighted to find the wisteria in the Wisteria Park in Jiading is in full bloom.

Wisteria becomes wanghong (Internet celebrity) every spring. With the weather getting warmer, it is in full bloom at Wisteria Park in Jiading District with the blossom estimated to last through early May.

The park reflects the friendship between China and Japan after Fujimoto Michio, its founder, brought wisteria from his hometown of Wake in Japan’s Okayama Prefecture to Jiading. The 88-year-old horticulturalist has devoted himself to promoting friendly relations between the two countries over the past 30 years, and he was awarded Shanghai’s Magnolia Gold Award in 1996 for his outstanding endeavors.

During the novel coronavirus epidemic, residents are required to book online before going to the park. They are required to wear masks and show their health QR codes when entering the park which reopened to the public on April 5.

After showing their reservation codes, health QR codes and ID cards, and had their temperatures checked, the Li family entered the park to wander around in the warm sunshine and take pictures of the flowers. They said their 9-month-old daughter was delighted to see such pretty flowers.

As it is the first time the park employs an appointment system, there are security guards around the park to ensure a proper flow of visitors.

To comply with prevention and control measures, only one gate is open to the public, which makes it easier to control the flow of visitors, said Tang Haibo, an official with the district’s landscaping management office.

The park also limits the daily number of visitors to a maximum of 3,000. Regular disinfection work has been intensified, including sterilizing restrooms once a day and benches every two hours.

The park is promoting a 2020 Jiading Wisteria Season activity to enrich visitors’ experience.

A flash mob show organized by the district’s convergence media center attracted many visitors on the opening day. Four artists performed a traditional Chinese dance under the wisteria while a musician played the guzheng (a Chinese plucked string instrument).

“We were taking pictures over there, and came here to see what was happening when we heard music. We were so surprised and glad to see the performance,” said a visitor surnamed Chen.

A medical worker surnamed Huang was attracted by the guzheng music as well. After her involvement in the fight against the novel coronavirus for months, she came to the park for relaxing.

“It was nice to watch this flash mob show. The performance and music made me feel that all the stress has vanished all of a sudden,” Huang said.

Realizing that the flash mob show might cause people to gather, the district’s landscaping department arranged several security guards to maintain order. Visitors watched the show while keeping a distance from each other.

Apart from the dancing and musical performance, activities such as hanfu (traditional Han costume) cosplay are to be promoted soon.

In addition, the Jiading convergence media center is promoting a series of products related to wisteria.

A visitor from Putuo District purchased cultural and creative products with wisteria elements including fans, umbrellas and dolls for his son and daughter.

The Wisteria Livestreaming section on the Shanghai Jiading app has been promoting online flower appreciation for those who are not able to visit the park to enjoy the wisteria.

“With the app, residents can appreciate the beauty of wisteria online in every direction,” said Guo Hongqi, vice Party secretary and editor-in-chief of the media center.

“By combining the cultural and creative products and activities with wisteria patterns we developed, we hope wisteria can become a namecard for the district, attracting more visitors to enjoy the colorful wisteria season.”

With regard to public transport, once the bus-subway transfer station at West Jiading Station has a huge number of people, shuttle buses from the Jiading Bus company will commute between West Jiading Station and Jialuo Highway and Bole Road station, taking visitors to the park directly.

Eighteen parking lots around the park have more than 2,500 spots available. In addition, the parking lots at business centers near the park are open to the public.

There are several other places where people can view wisteria this spring, including the 100-year-old wisteria near Fahua Pagoda on Zhouqiao Old Street, the Ziyun Corridor around Huancheng River near Pantuozi Park and North Water Gate Park. 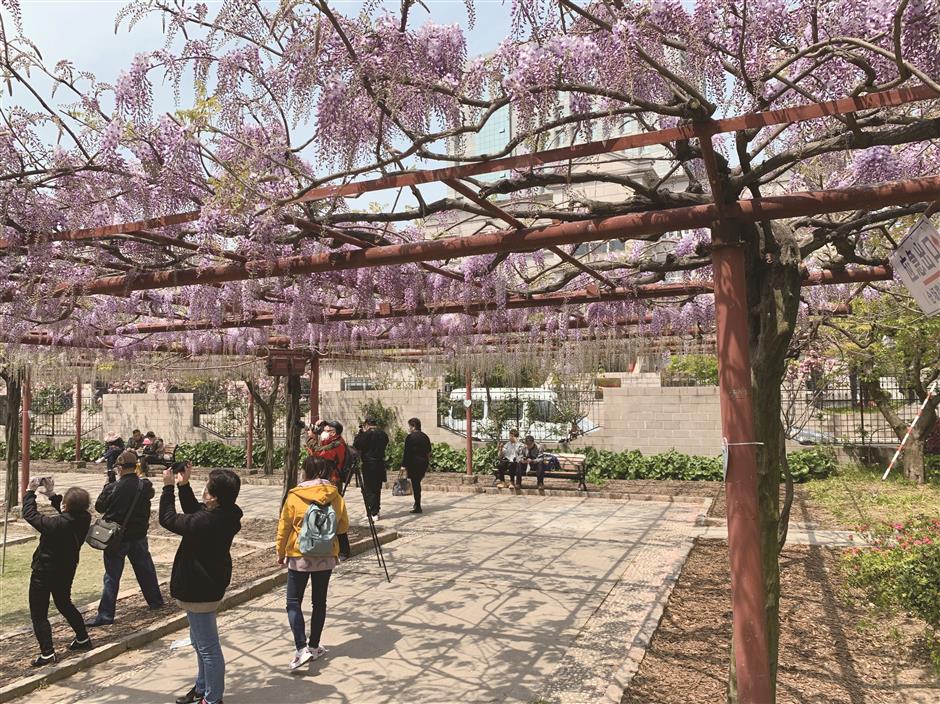 Residents take photos of the beauty of wisteria in the park.

Special Reports
ADVERTISEMENT
61763
,
Wisteria in full bloom amid spring warmth
Taiwan's 'Little Greece' becomes popular attraction
Explore old-fashioned railway stations in western Taiwan
Traditional villages where time stands still
For a spring break, take a stroll in our beautiful backyard
Been there, done that? Not at these quirky sites
B&Bs in rural areas add artistic flourish to farmland holidays
Xiangshan awakens with arrival of spring
Hangzhou abounds with festival activities
A step back in time in any language in Songjiang
EXPLORE SHINE