Lockdown in an exotic locale yields a natural world of biodiversity

Sometimes travel goes beyond a sense of adventure and turns into utter chaos. Then, out of chaos, something beautiful and expected emerges.

Such is the case with a Shanghai traveler and documentary director who calls himself only Chao. He went to Ecuador earlier this year, not expecting the tentacles of the coronavirus pandemic to reach the South American country. Now he’s stuck there.

Chao has had an impressive number of trips that were indeed adventures. He made a documentary about elephant abuse in the elephant-riding business in Thailand. He recorded the deplorable conditions in a Manila slum.

But no doubt his trip to Ecuador, a country that most Chinese people might have trouble quickly finding on a map, will be the most memorable so far.

The first leg of Chao’s journey started last August, when he planned to visit the Middle East, Africa and South America to look for material for new works and to “broaden his vision” of the world.

The original plan called for the trip to end in Egypt in December, but Chao prolonged it several times. On February 17, he entered Ecuador.

World traveler and documentary producer Chao, stuck in a jungle of Ecuador due to the novel coronavirus pandemic, finds endless joy in native flora and fauna.

“Before that, I was in Africa, where I was keeping up with the coronavirus epidemic situation in China, both on Chinese and foreign platforms,” Chao says. “In the beginning I thought it would be like SARS all over again, but then I came to realize that the situation might be worse.”

Still, to Chao, the epidemic was a disaster far away.

When he caught a plane in Madrid to go to Ecuador, flying still seemed pretty routine — except for an airport notice in various languages, including Chinese, saying that people arriving from epidemic areas were instructed to self-isolate at home for 14 days.

By the time he arrived at customs at Ecuador’s Quito International Airport, however, the mood had changed.

“When the custom officials saw my Chinese passport, they went on full alert and asked to take my temperature,” Chao says.

“The electronic thermometer showed that I had a fever. I explained that away by telling them I had walked a long time carrying two large pieces of luggage and I was nervous about all the questions they were asking. I suggested we could try again after a while. But again, the thermometer said my temperature was 38 degrees Celsius. An official took out a face mask and put it on her own face.”

Eventually, a customs official fetched an old-fashioned mercury thermometer and asked Chao to place it in his armpit. He passed the temperature test. Welcome to Quito, capital of Ecuador!

“I stayed in a local B&B, whose owner is an artist,” he says. “At that time, the atmosphere was quite relaxing and he took me on a tour of the city. No one kept a distance from me.”

Not long after, Chao headed to a village deep inside the Amazon rainforest at the invitation of local aborigines. Towns on the verge of the forest — where a child shouted “coronavirus” at him — still had communication with the outside world. But once he went into the dense forest, he completely lost contact.

Chao spent three weeks in the rainforest, immersing himself with natural wildlife: swimming with pink guinea pigs, watching scarlet macaws gather on a tree every day, looking for crocodiles and fishing for piranhas.

“In the rainforest national park, I once spent an hour in an area of just 100 square meters,” he says. “It was full of insects, birds and plant that I had never seen before.”

Preoccupied with such exotic wildlife, Chao didn’t realize that the “outside world,” including Ecuador, was going through a shattering pandemic outbreak. Imagine his shock when he emerged from the wilderness!

“I had felt lucky that I was on the other side of the world when the epidemic broke out in China, but suddenly I realized that you couldn’t escape it,” Chao said. “We were all in it together.”

On March 12, Ecuador declared a state of emergency, and four days later, the country closed all its borders.

“New information seemed to come by the hour about closed borders, suspended transport and so forth,” he says. “There were no flights other than humanitarian ones heading for Europe and the United States. I needed a connecting flight if I wanted to go home, and I couldn’t get on a humanitarian flight.”

Chao needed to make quick decision: tough it out in Quito or go somewhere else to endure the lockdown. Staying in the capital was out of the question because of its high prices.

So Chao fled, taking the last bus of the day to Mindo, a small town near Quito. He knocked on the door of a treehouse B&B with no current guests. The hostess welcomed him in.

A treehouse accommodation is home until Chao can find a flight back.

For the last six weeks, Chao has spent all his time in the town, which is known for its large array of butterflies and birds. The treehouse accommodation is surrounded by thick forest, and his window faces a large verdant valley.

“When I opened my window the morning after arriving, I knew I had made the right decision,” he says.

Chao made friends with the hostess and her family. At first, they made meals for him, but now Chao makes them Chinese food. He sometimes drives to the local market to get provisions.

The stay there has given him an unhurried chance to observe nature. He says that every trip he has ever taken caused him to reflect on something, usually the relationship between man and nature. The nature around Mindo particularly touches him.

“Every day I watch hummingbirds flitting among flowers, and I feel that all creatures on earth are connected and we share the same cycle of life,” he says. 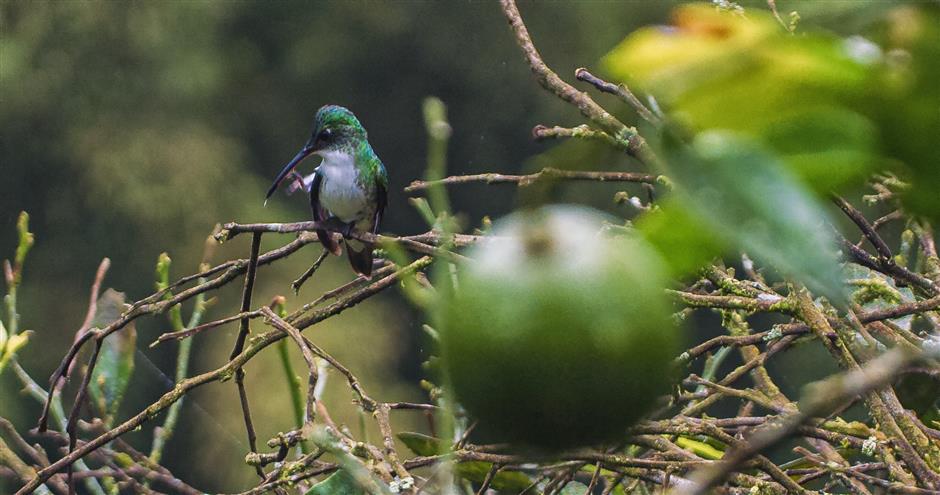 He has taken a lot of footage for future videos and has completed one based on his experience in Ecuador. It’s entitled “One Hundred Days of Solitude” — a takeoff on “One Hundred Years of Solitude,” written by Colombian Nobel Prize winner Gabriel Garcia Marquez, one of South America’s most celebrated authors.

In the video, Chao starts with the words: “This is the 25th day of Ecuador being locked down. The Chinese embassy says that there is no flight home.”

Then the video shows how vibrant Quito was before lockdown, the treehouse where he currently resides and the hummingbirds he has befriended.

He also wrote a song dedicated to the earth and published it online on April 22, the 50th Earth Day. In the song he expresses how humans are now being punished for harming the earth.

“I can see how animals are here without human activities,” he says, “but what we humans are going to do without earth?”

Chao says he will stay in Ecuador until he finds a flight home.

“I think the pandemic has changed our lifestyles,” he says.

“And maybe we should take advantage of that to reflect on what we really want to do with our lives. I hope that my experience will inspire people to do that.”

The valley view from Chao’s treehouse B&B is solace during isolation.

Special Reports
ADVERTISEMENT
Hangzhou attractions make latest 4A list
Taiwan's 'Little Shanghai' revives thanks to surging tourists
Back to the past in Cangcheng with its old residences and bridges
Raise a glass to a lady who knows her beer
Look familiar? A town on the Yangtze that has hints of Shanghai
A bike, a dream and gritty resolve. The odyssey begins
No need to travel far. Great outings are found in our own backyard
Wander among #Instaworthy spots in Penghu
On a tropical island wonderland, tourists on beaches gaze skyward
A festival of color blossoms on Wushan Hill
EXPLORE SHINE