The power of 5 to boost visitor numbers in Songjiang 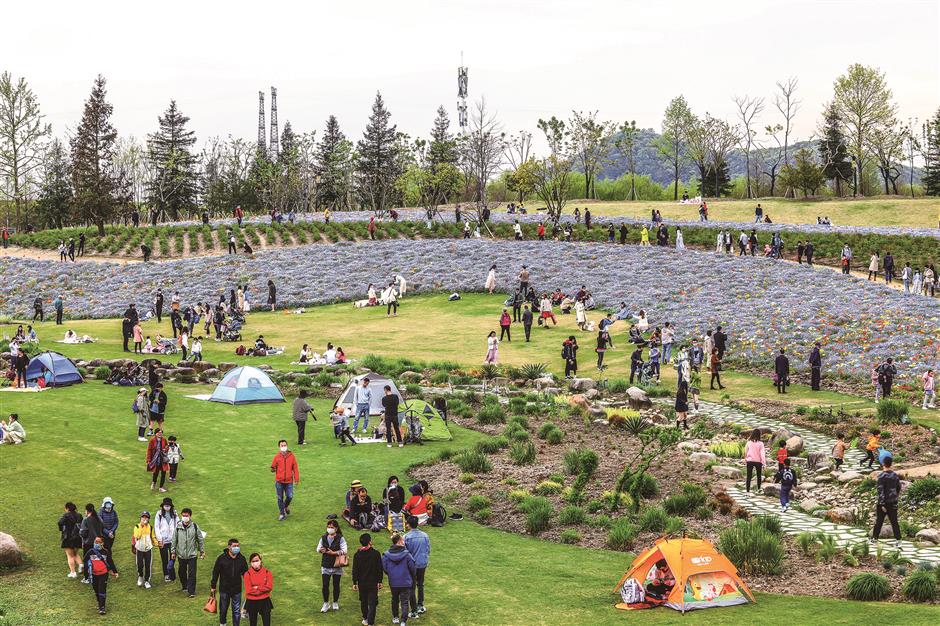 People camp or look at fresh flowers at Chenshan Botanical Garden in Songjiang.

To revitalize the district’s tourism sector after the COVID-19 pandemic, Songjiang is coming up with a “Wu Gu Feng Deng” tourist routes plan and various preferable policies to benefit visitors.

Wugu Fengdeng is a Chinese idiom describing an abundant harvest of all crops and the phrase being used here suggests good fortune and emphasizes the number five.

The route is paved with pastoral wonders and mainly includes the four Songjiang towns in the south of the Huangpu River: Xinbang, Maogang, Yexie and Shihudang. Xinbang Town is renowned for its peonies in spring and lotuses in summer, whereas Maogang Town, intersected with rivers and ponds, is a good place to pick blueberries and cherries. Yexie, a historic town with generations of talent, is also famous for its local cakes, which are now an intangible cultural heritage in Shanghai. Shihudang Town, located near the origin of the Huangpu River, has a legendary pine tree planted by Emperor Qianlong (1711-1799) in the Qing Dynasty (1644-1911).

The route can especially cater to tourists who are fond of the pastoral life. At Wushe Farm in Maogang Town, visitors can pick seasonal vegetables or fruit and taste unique cuisines and snacks made in a farmhouse. The Eighty-eight Mu Farmland in Yexie Town is another good tourist destination to experience a peasant’s life. The tasty rural cuisines and snacks that are a must-try in the area include four-gill basses, Huangpu River crabs, Sheshan bamboo shoots, Cangqiao crystal pears, Guangli zongzi (a pyramid-shaped dumpling made of glutinous rice and wrapped in reed leaves), Maqiao dried bean curds, Yexie cakes and Zhangze goat meat, among others.

The high-tech route allows tourists to witness Songjiang’s science and technology innovation. At the G60 High-tech Corridor Planning Exhibition Hall, visitors can be introduced to the world’s leading high technologies while being showcased with models of Songjiang’s advanced manufacturing clusters. The Jiuzhou Oasis Park in Lingang Songjiang Sci-tech City is both a greenbelt park and a decoration to the huge industrial park. The Lyfen Snack Museum founded by Songjiang snack company Lyfen, has collected thousands of kinds of snacks from countries all over the world. It also introduces the company’s quality control, logistics and storage systems to visitors. Other industrial tourist sites include Babi Food Production Base and Dongjing Artificial Intelligence Base.

People have been confined indoors for a long time due to the COVID-19 pandemic, and this spring they can get some relief at Songjiang’s various entertaining tourist sites. Shanghai Happy Valley, besides its usual thrilling entertainment projects, will hold a spring party that introduces animations and computer games. At the Wonderland Area adjacent to InterContinental Shanghai Wonderland, parents and children can camp and be informed of global architecture wonders, whereas in Fangta Park and Zuibai Pond Park azaleas are in full bloom. Whether visitors want to find respite or have a family tour, the leisure route in Songjiang, including Shanghai Happy Valley, Shanghai Yuehu Sculpture Park, Sheshan National Forest Park, Chenshan Botanical Garden, Wonderland Area, Zuibai Pond Park and Guangfulin Country Park, will fit them perfectly.

Songjiang, a place with rich natural and cultural resources, has been attracting literati and scholars to settle down here since ancient times. Chen Jiru (1558-1639), a man of letters in the Ming Dynasty (1368-1644), led a reclusive life on the east Sheshan Mountain in his later years and wrote: “Whenever I open a book I find a pure land, and whenever I close my doors I feel myself like a hermit.”

The Lu Brothers Reading Platform, another antique site in the area, was where Western Jin Dynasty (AD 265-317) scholars Lu Ji (AD 261-303) and Lu Yun (AD 262-303) spent 10 years reading Chinese classics. Songjiang’s Tang Dynasty Sutra Pillar is the oldest architecture in Shanghai. The Yun Jian Granary Cultural and Creative Park that opened to public in mid-April is a renovation of former factories and barns built between the 1950s and 1990s. And Songjiang Cloth Art Gallery on Cangcheng Old Street allows visitors to see renovated ancient buildings and admire the weaving technology in rural Songjiang in olden times.

Visitors who are keen on soap operas and motion pictures can ride a bike and cross between the district’s Shanghai Film Park, Cangqiao Film Base, Shengqiang Film base, Tames Town and Songjiang University Town where quite a few film crews have shot their motion pictures.

Songjiang’s abundance of hotels are comfortable places to stay and they are proper destinations for visitors wishing to hold business events. The InterContinental Shanghai Wonderland, often dubbed the Pit Hotel, is built into a side wall of an abandoned quarry and is 88 meters below the ground. The Glee Tour Hotel in Shanghai Happy Valley is Spanish-style architecture, while the Yuluxe Sheshan Hotel near Shanghai Yuehu Sculpture Park offers guests the perfect perspective to enjoy wonderful scenery.

Joint tickets that cover multiple scenic spots are on offer and medical staff nationwide can enjoy free entry to some of the tourist sites.

Health QR code, temperature checks, wearing a face mask, a limit on tourist numbers and entry reservations will be enforced to ensure safety.