A festival of color blossoms on Wushan Hill 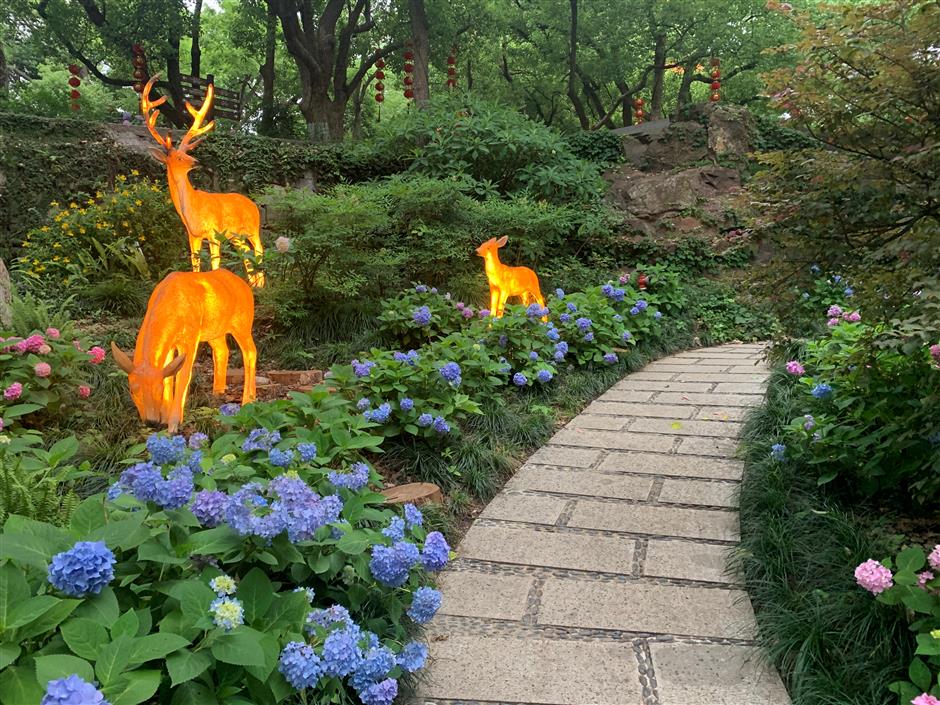 Deer-shaped lanterns are shining amid blue hydrangeas on Wushan Hill.

The traditional Wushan Hill Hydrangeas Festival is now in full swing with the blossom estimated to last through July 1.

Hydrangeas become wanghong (Internet celebrities) every early summer in Hangzhou. Their flowering comes in periods and is usually followed by a drop in the seasonal temperature. The earliest starts from early May while the last blooms could flower as late as early July.

This year, the management committee of the Wushan Hill Scenic Area has introduced new varieties from Italy, the Netherlands and Japan. A total of 90 types from home and abroad, including pink, blue, white and red, have dotted nooks and footpaths in the area.

Hydrangeas in different colors are in full bloom now on Wushan Hill.

In Hangzhou, hydrangeas are some of the most common ornamental flowers in urban areas. People name them ziyang (literally “purple sun” in Chinese) and baxian (literally “eight immortals”) flowers, endowing them with poetic elements.

Common hydrangeas feature two flower arrangements. One is characterized by large round flowerheads that resemble the head of a mop. The other bears flat flowerheads with a center core of subdued flowers surrounded by outer rings of showy flowers.

This year, the festival features Chinese lanterns. Due to COVID-19, the traditional Wushan Hill lantern show was canceled during Chinese New Year, and the flower festival is making up for that.

Organizers have set up conventional dragon, phoenix, deer and floral-shaped lanterns amidst the flowers.

Craftspeople have used bamboo strips to produce lantern frames in various sizes and shapes. These ornate lanterns will light the Wushan area. This may be the most visually stunning view in the city now, as the lanterns create a kaleidoscope of colors.

Chenghuang Pavilion, at the top of Wushan Hill, is considered as the best spot to view the lantern show panorama. At night, the illuminated pavilion is a landmark of Hangzhou. People can enjoy a panoramic view of West Lake as well as the city.

Chenghuang Pavilion, literally translated as “city god pavilion,” is now an epitome of the city’s soul. The seven-story building is home to the past, present and future aspirations of the city.

The pavilion is open at night, so it’s worth checking out for sunsets and night views. It is the best place to enjoy a fresh mountain breeze.

For years, Wushan Hill has been taken as an education center to popularize knowledge of hydrangeas and local crafts. During the flower festival, organizers will invite craftspeople to create paper cuts and knicknacks themed on hydrangeas.

A mix of gorgeous colors to delight visitors on Wushan Hill scenic spot.

The park is also filled with cosmos flowers with pink, purple and white blooms. Just immerse yourself in what appears to be an ocean of flowers. Observe closely and watch butterflies and dragonflies dancing among them.

This park is situated in a marshland nestled between two hills. Previously, the area was packed with sludge dredged from West Lake. With time though, seeds in the sludge began to sprout.

Today, the park boasts some 200 species of plants and 90 types of birds.

Where to enjoy the flower

Hangzhou has a long history of cultivating hydrangeas. Following are some ideal spots covered with vibrant blossoms through July.

Special Reports
ADVERTISEMENT
61761
,
A festival of color blossoms on Wushan Hill
Beds empty, small innkeepers turn to stop-gap measures
Island-hopping among natural wonders in Taiwan
Little Liuqiu has it all: A dive into coral reefs and luscious seafood
Desert kingdom of contradictions is opening up tourism
Getting back outdoors: an elixir and chance to do a bit of sightseeing
Now is the time to get out to enjoy life
Jade Mountain represents Taiwan's spiritual fortress
The power of 5 to boost visitor numbers in Songjiang
Visit the grand canyon in New Taipei City
EXPLORE SHINE