Yesterday, today and tomorrow: the delicate side of urban renewal

After standing for nearly a century on the sites where they were built, five historic buildings located in Shanghai’s largest urban renewal project were on the move in the past week in Jing’an District.

Lifted and loaded, the last building started its journey to a new site about 230 meters away at 10:30am on Thursday. About 100 minutes later, it joined the other four, completing a five-day massive relocation effort.

The brick-and-wood residential structures, built in the 1930s, belong to an aged shikumen (stone-gated) back alley neighborhood on Anqing Road. Their protected status saved them from the wrecking ball when authorities decided to give the area a facelift some years ago.

Under the urban renewal plan, an underground garage will be built on the site vacated by the buildings. When that is completed in two years, the structures will be returned to their original venue.

The temporary relocation was the largest and longest-distance undertaking to date.

One building was shifted 230 meters, far exceeding the 57-meter relocation of Minli Middle School and the 66.5-meter move of Shanghai Concert Hall.

How was it done? Shanghai Daily visited the site on the day the last building was moved to find out. 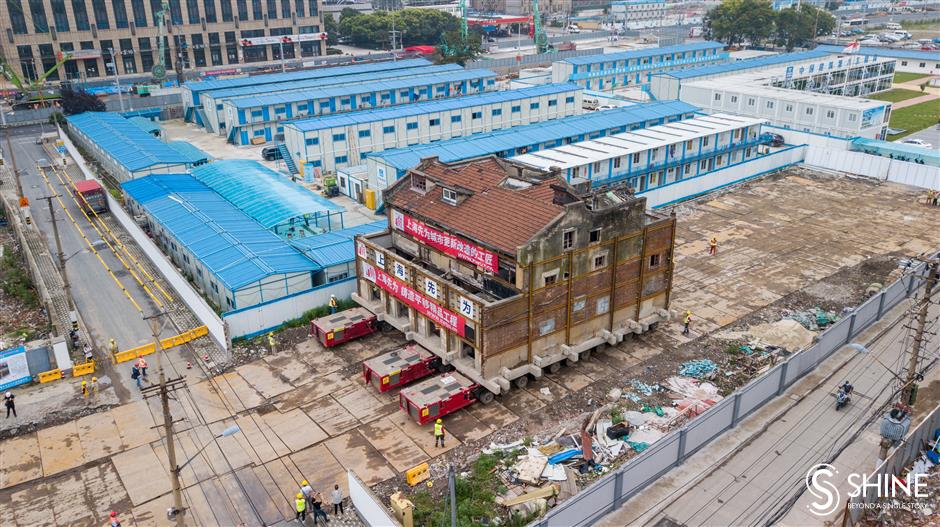 Move of one of the historic buildings

Painstaking preparations and advanced technologies were undertaken, according to Yang Jiangli, who works for the project contractor, Shanghai Xian Wei Civil Engineering Co.

Workers dug and removed gravel and soil underneath the last building, replacing them with a huge concrete slab. After the structure was reinforced by steel, workers cut the slab in two. The lower half was left on the ground, while the upper half and the building itself were raised by lifting jacks.

Then contractors resorted to a self-propelled modular transporter, a platform vehicle sitting on a large array of wheels. Such a transporter is commonly used for massive objects, such as oil-refining equipment and large bridge spans that are beyond the scope of even heavy-duty trucks. 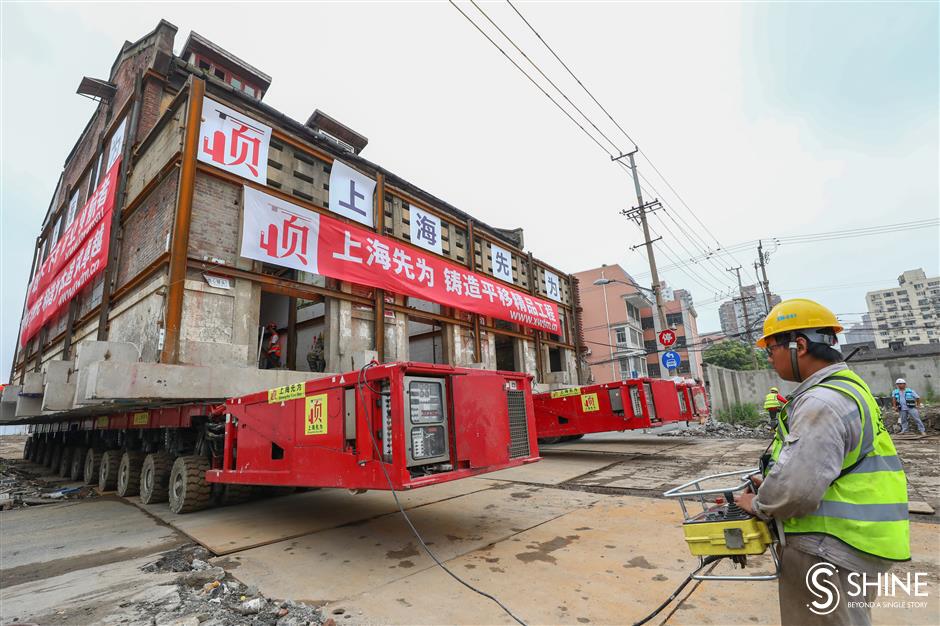 A worker with a hand-held control panel steers the transporters.

Backed by a hydraulic system, the platform can rise and descend by itself, without the help of cranes. A grid of computer-controlled axles can turn and move sideways, evenly distributing the weight of the load and keeping it steady, even over bumpy roads.

“We used three of the transporters to ensure a safe and smooth journey,” Yang said. “A worker with a hand-held control panel in the front steered them, and there were also more than 10 workers inside the building, both upstairs and downstairs, to ensure that no damage was being done during transport.

“Previously, buildings were rolled on rail tracks to new locations, and it took one day to move 10 to 15 meters,” he said. “Under those circumstances, we couldn’t make turns, which played havoc with traffic.”

At their temporary site, the five buildings will be walled off to the public, and security guards will patrol the area, Yang said. 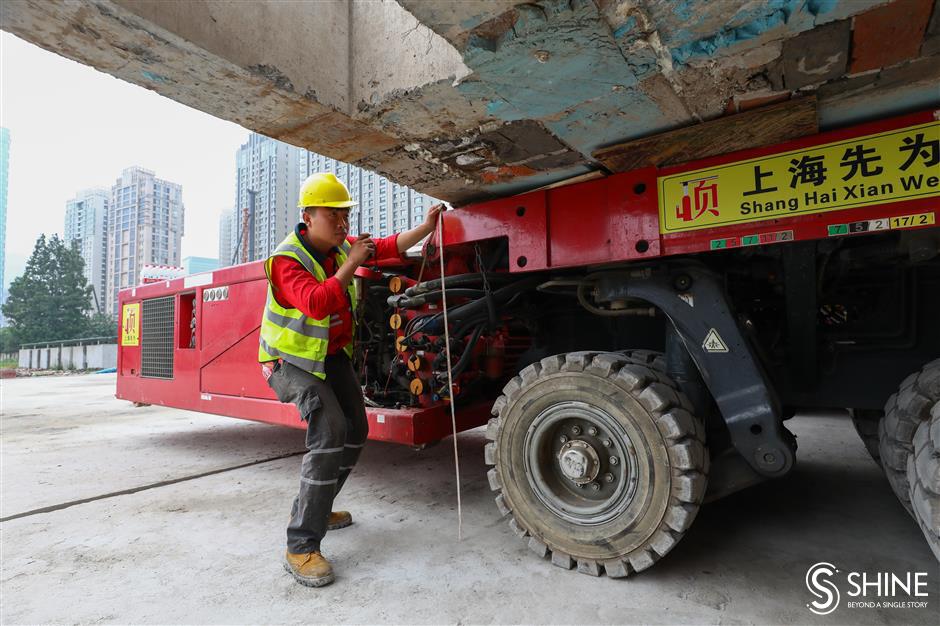 A worker measures the height.

Massive as their move was, the five buildings are just a tiny part of the large Ankangyuan project in the heartland of the Suhe Bay area, an emerging upmarket riverside community that is regaining its former glory days.

It is bounded by Henan Road N. to the east, Zhejiang Road N. to the west, Haining Road to the south and Tianmu Road E. to the north. The project spans two sides of Anqing Road.

The area used to be home to 7,351 families, who had been living for decades in dilapidated houses with shared kitchens and toilets, cracked walls and leaky ceilings. Redevelopment plans began in 2015. 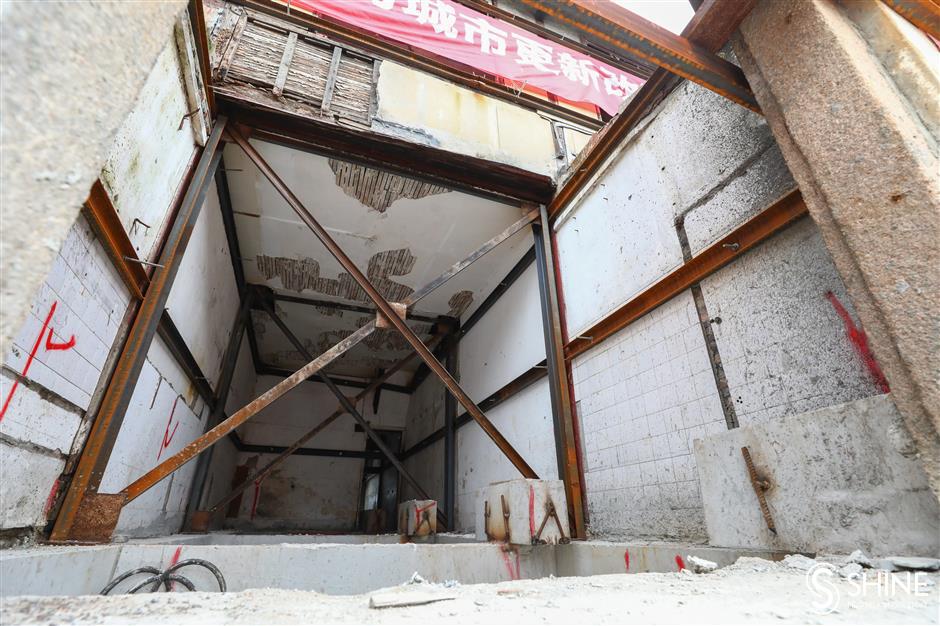 The interior of the building has been reinforced.

“We are going to create a high-end community where residences, commerce and entertainment are perfectly combined, featuring century-old heritage and Shanghai-style scenery,” Dai said.

“Previously, Xintiandi and Fengshengli redevelopments were wholly commercial,” he said “Our project will be the first shikumen-style compound with different functions all in one. The traditional feel that existed in the 1920s and 1930s will coexist with modern elements. Our project will highlight the city’s yesterday, today and tomorrow.”

Dubbed an “open shikumen museum,” the area has buildings of different eras and in different styles. Most of them were preserved as a neighborhood.

They include Spanish-style townhouses inside the Junyili neighborhood, Guangdong-style lane houses in Qianjiang New Village, a garden villa of both Western and Eastern architecture known as Liang’s Residence, and the eclectic-style Shanxi Movie Theater.

Wu, a prominent painter, calligrapher and seal artist, was considered a leading figure in traditional Chinese painting, especially of flowers and birds. He lived with his family in the area from 1913 until his death.

Some buildings will be residences; others will house shops and eateries. The Shanxi Movie Theater and Wu’s former residence will open as cultural venues after renovation, according to the plan.

New buildings will also be erected, including an office complex, a luxury hotel and apartment buildings. 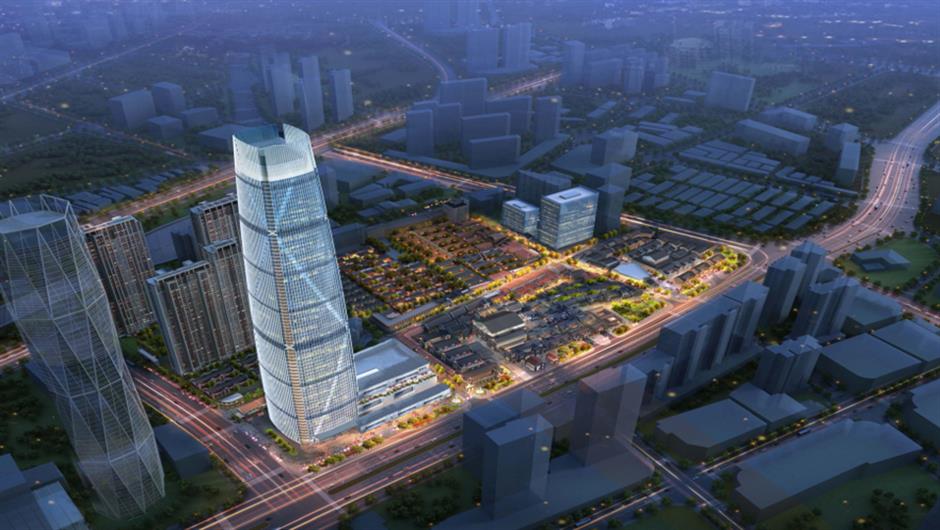 Design of the Ankangyuan project 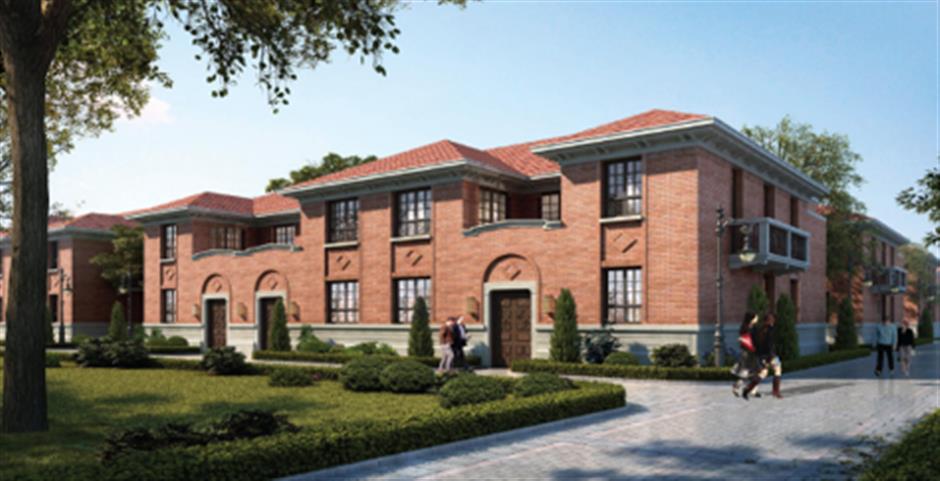 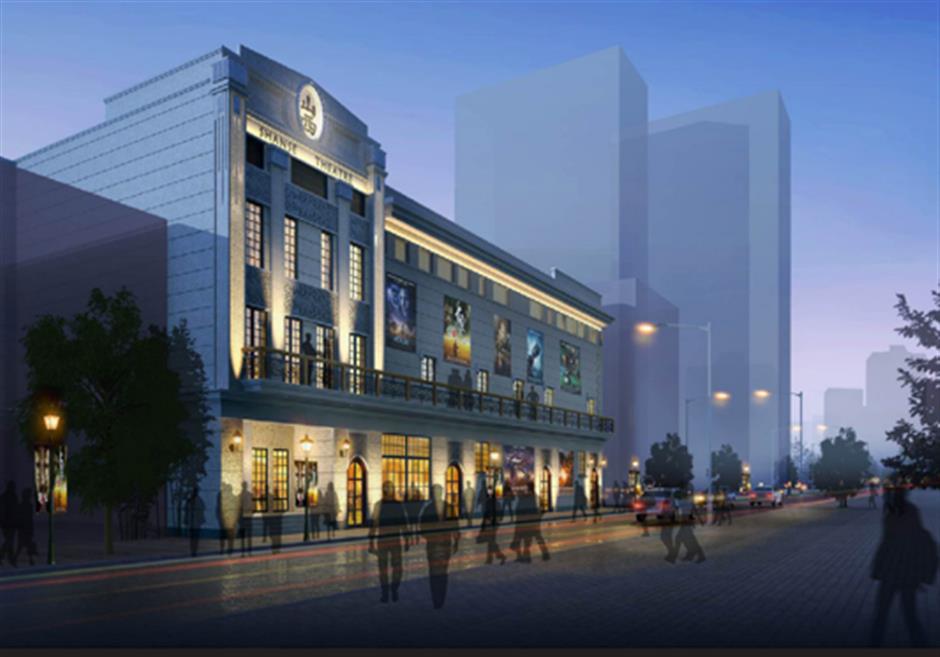 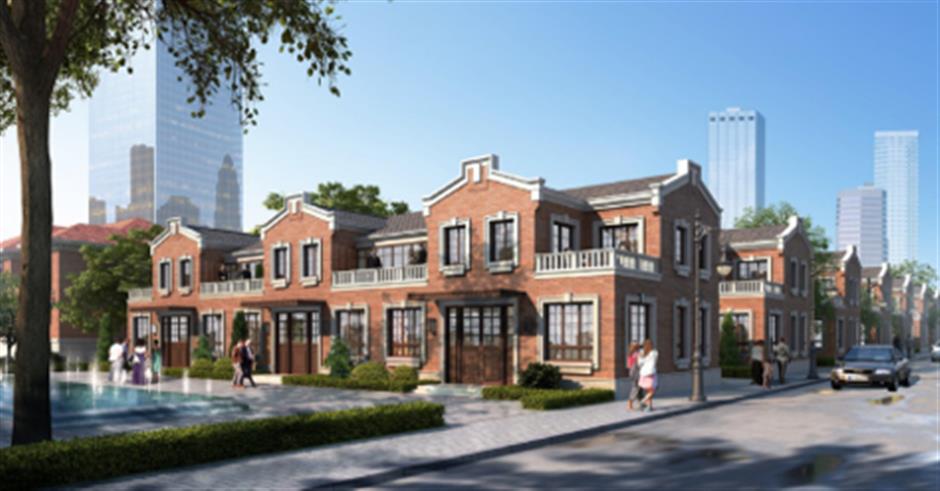 Sites that have been preserved for posterity

An increasing number of historic buildings in Shanghai are being moved to new sites instead of being razed by urban renewal. Here are a few examples:

In 2003, the Shanghai Concert Hall was shifted 66.5 meters and elevated over 3 meters to make way for construction of Yan'an Elevated Road. At the time, it was called a "miracle" of China's construction engineering.

Established in 1930, the hall used to be the best cinema in Shanghai. In 1959, it was transformed to a concert venue.

After the move, it reopened in 2004, fourfold larger in size. The facade was restored to its original look, and marble pillars, chandeliers and other embellishments were added to provide a vintage feel.

The three-floor structure finished its 57-meter-long journey in February 2010 to make room for a commercial project.

It was initially built in 1920 as residence by brothers Qiu Xinshan and Qiu Weiqing, two paint industry tycoons. In 1940, Minli Middle School, then one of the most reputable schools in Shanghai, bought the building from the brothers and turned it into classrooms.

The school moved out of the building after Hong Kong-based HKR International Ltd won the contract to redevelop the area. The structure was renovated and renamed Cha House in honor of company founder Cha Chi Ming.

The building has retained its unique fusion of Chinese and Western architectural styles, making it a standout in local historical garden villas. 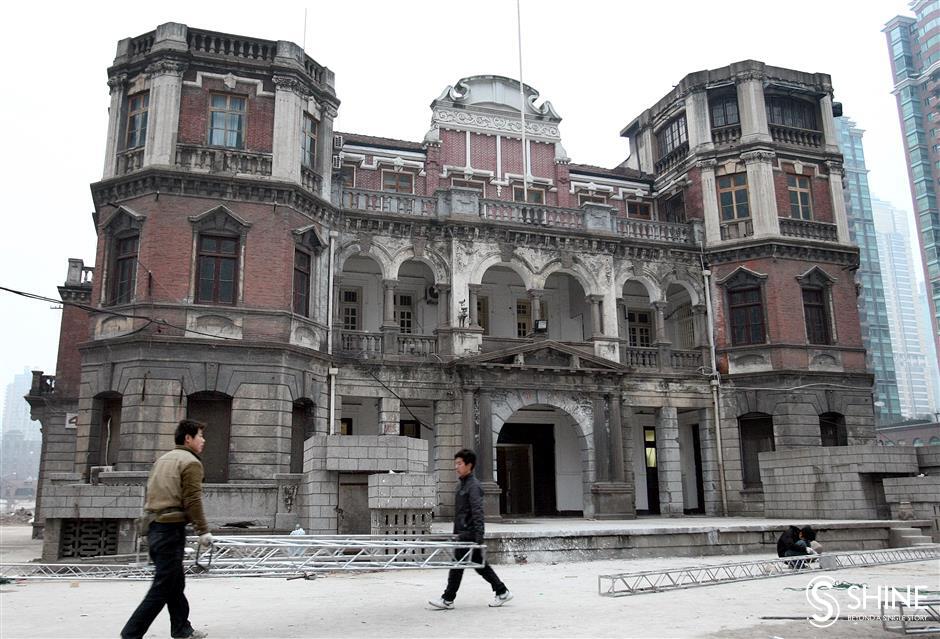 In September 2017, Mahavira Hall, the main pavilion of the Jade Buddha Temple, was shifted 30.7 meters to the north.

Built in 1918, the structure’s move included three giant Buddhist statues and other cultural items as part of temple renovation. The makeover created more room for worshippers and addressed fire and other safety concerns. 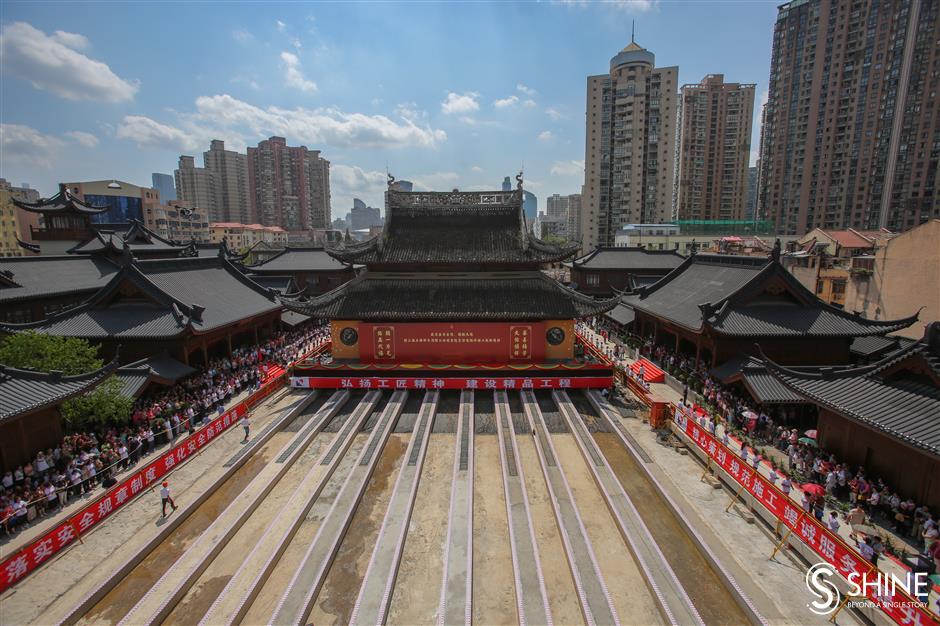 An old housing block, one of the oldest lane-style sites in the city, was moved about 50 meters from its original address at 104 Jiangpu Road to make way for construction of the Jiangpu Road Tunnel beneath the Huangpu River.

The move was completed in January 2019. The block will be relocated back to its original site after completion of the tunnel sometime next year.

The three-story block was one of 28 built in 1902 by the Japanese firm Mitsui Bussan Kaisha to accommodate its senior staff. It is the last of the buildings still standing. 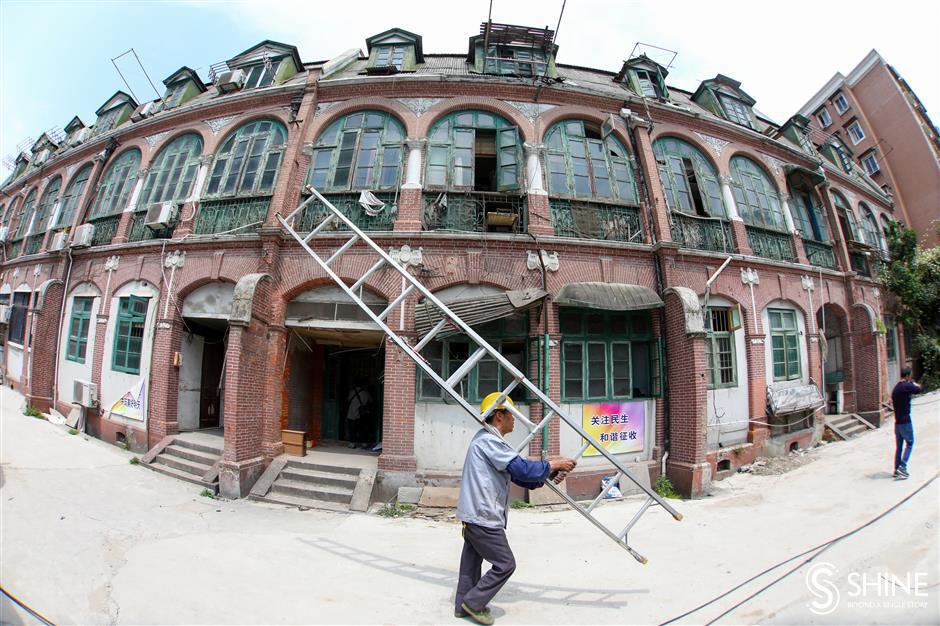