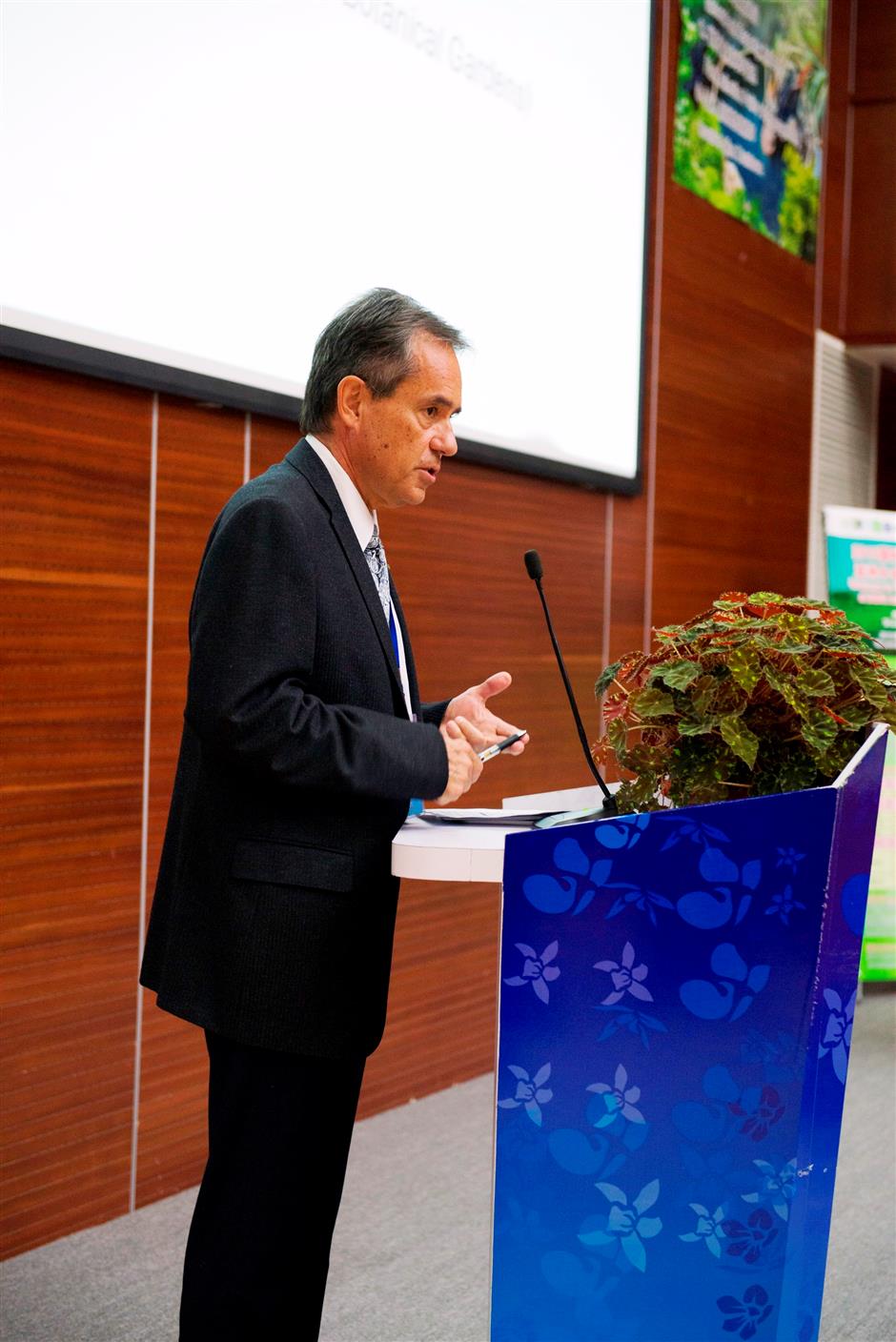 Gilles Vincent, 67, from Montreal in Canada, had many possibilities when he retired, including invitations to become a university researcher or an adviser at major botanical gardens around the world because of his expertise.

He chose to leave his hometown to travel tens of thousands of kilometers to Shanghai to become special adviser to the director of the Chenshan Botanical Garden in Songjiang District.

He was among 50 expats from 19 countries and regions to be given this year's Magnolia Silver Award in recognition of their contributions to Shanghai’s development.

A graduate in biological sciences and botany from the University of Montreal, Vincent specializes in biotechnology, specifically the use of aquatic plants for waste water treatment.

At Chenshan, he was involved in many different development projects, including improvements in the management of the living collections.

He also established the "Ecological Phytoremediation Research Group" which mainly researches how to use plants to solve environmental problems such as water and soil pollution. The work involved collaborations with researchers from the University of Montreal.

Vincent was in charge of the education team at Chenshan and established various programs for both children and adults.

His job also included visiting other botanical gardens in China and delivering lectures on plant conservation, biodiversity, and the different important roles of a botanical garden.

Chenshan, which opened to the public in 2010, may be regarded as a newcomer compared with many world-renowned botanical gardens. But Vincent has never regretted his decision as he saw infinite potentials of the garden from the very beginning.

"After my first trip to China with stops in Beijing, Shanghai, Sichuan and Yunnan in 1992, I fell in love with this country and Chinese people," he said, recalling his first scientific research exchange visit as a member of a delegation after Shanghai and Montreal signed a sister-city relationship in 1985. 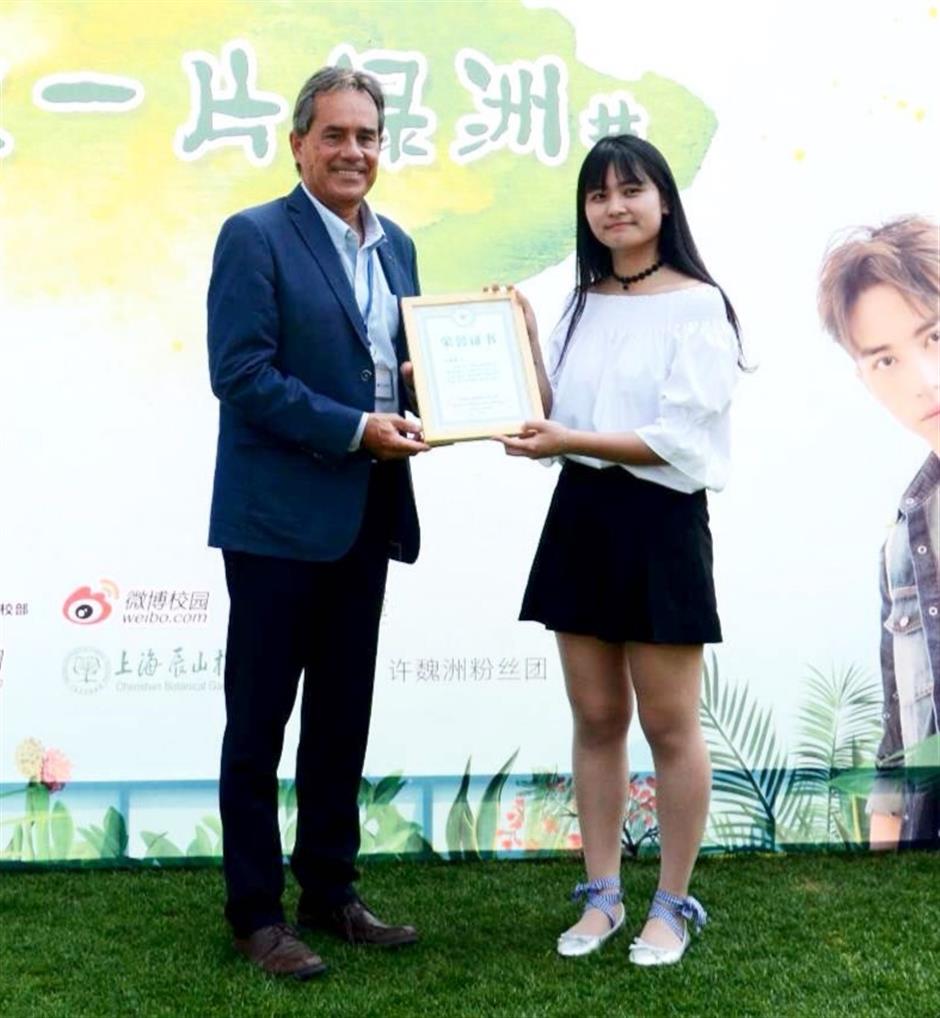 "There are many reasons why I came to work at Chenshan, firstly because of the very close, strong links and sincere friendship existing between Shanghai and Montreal," he said.

"Chenshan Botanical Garden was a new botanical garden, with a lot of possibilities, great future and will become, if it is not already, a key player in the international botanical gardens community," he said.

"I thought it was time for me to share my experience and knowledge of botany, plant conservation, education and science, all this being the main mission of all botanical gardens in the world. At Chenshan, with all these young employees eager to learn, I knew it was the one and only place for me."

When he arrived at Chenshan in 2014, the garden had a number of challenges with regard to soil pollution.

Vincent used his expertise in using plants to purify soil and water to help with the launch of a soil improvement project.

“I was really impressed how big and well established this garden can be four years after its opening, and it has all the main mission of a real botanical garden — research, conservation and education,” he said.

“However, I noticed a few things needed to be improved, mainly about maintenance. Not necessarily big and important things but I always said small things can make a big difference in the quality of a visit by our visitors. Also, some thematic gardens were not necessarily placed in a good surrounding environment.”

Vincent said most botanical gardens are going through very hard times due to a lack of funding, but not in China.

"China has large and important botanical gardens under construction. Especially at this time, citizens need to have a better connection with nature and this is the main mission of a botanical garden." 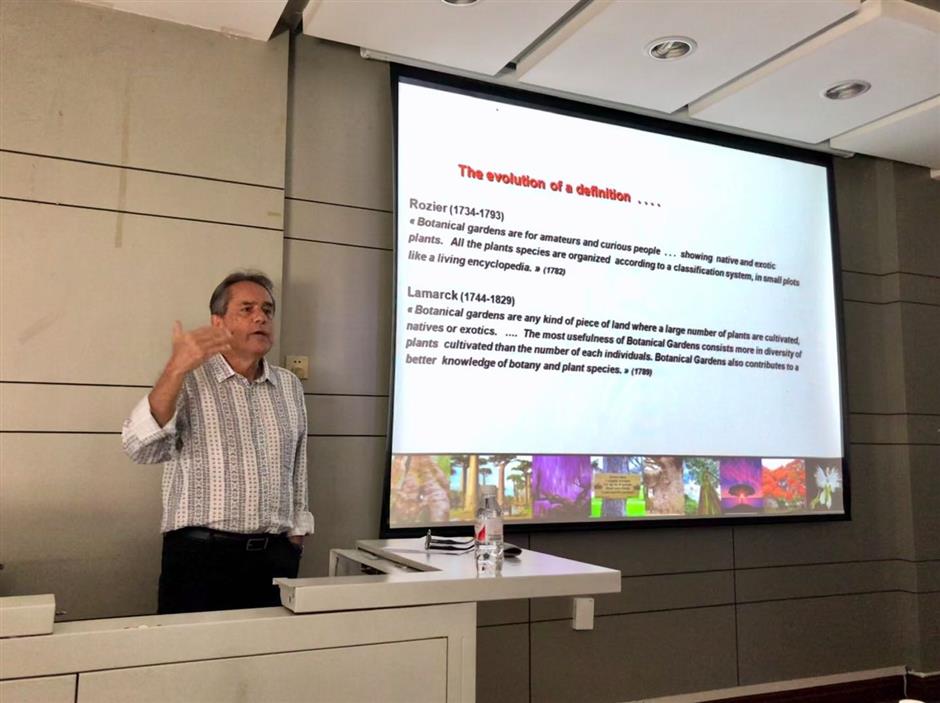 Gilles Vincent delivers a lecture on botanical gardens in Shanghai.

He said he was impressed at how China takes environmental issues seriously.

“The continuous increase in the number of electric cars, the recycling program for household waste, and the solar panel energy production in China are impressive," he said.

Vincent is now a researcher at the University of Montreal and gives lectures on the environment in schools for children aged from 12 to 16.

"Technology is here and there are plenty of good examples of important and positive initiatives regarding the environment, and I share many examples from China," he said. “Our children have many reasons to be optimistic.”

He added: ”I hope the pandemic will not stop international exchanges which are crucial for an international and scientific institution like Chenshan.

"There is no competition between botanical gardens. They all do the same: conservation, research and education."

Vincent is eager to visit Chenshan again. He said COVID-19 had led to many changes.

"I left in December 2019 and the plan was for me to come back in May for an international conference and in September to teach our training programs and to complete some research work with my team," he said.

"Unfortunately COVID-19 changed all these plans but I strongly hope it will be different in 2021.”

Vincent had a memorable experience in Shanghai.

"I especially liked the Bund, Shanghai Zoo and Shanghai Tower, and I received many Canadian friends while I was in Shanghai and they told me I was a perfect guide," he said.

"I had the chance to visit many well-known places such Huangshan Mountain, West Lake, Lijiang and Xitang Ancient Town. But more important were the amazing people I was able to meet. They are always willing to help. Good memories.”