How to make a silk purse out of a sow's ear 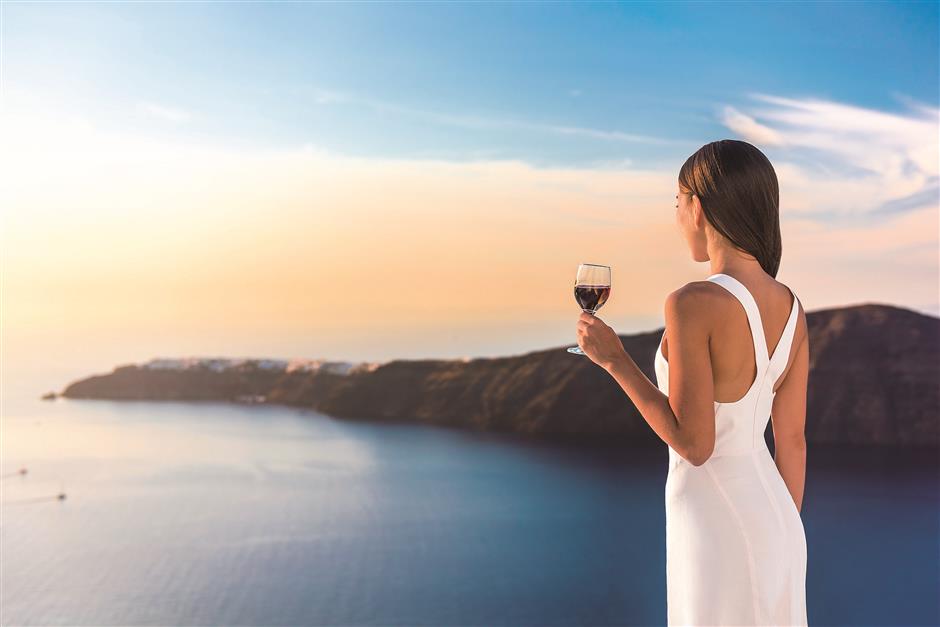 These are the images of a lavish lifestyle, as posted by social media users. But behind the apparent glitz lies the deception of people who want others to think they live more luxuriously than they actually do.

The Chinese blogger, who identifies himself as Li Zhonger, went “undercover” in a WeChat group called “Shanghai Socialites.” His post was retweeted on Sina Weibo. The hashtag “Shanghai Socialites” hauled in more than 1 billion views in less than a day.

It’s a phenomenon called “fake it until you make it.” Although many netizens probably weren’t surprised by such faux celebrity-itis, Li’s post still revealed some jaw-dropping details and the lengths wannabe socialites will go to pass themselves off as high-flyers, including sharing intimate items like a pair of Gucci tights for photos.

Li paid 500 yuan (US$74) to join an invitation-only group chat. Its invitation states that the group is focused on discussions of luxurious designer brands and meeting “high-quality men who work in finance or have studied abroad.”

“I thought I had joined the socialites, but after half a month, I realized it was a just an upgraded version of Pinduoduo,” Li wrote in the post.

Pinduoduo is a Nasdaq-listed Chinese e-commerce platform best known for its team purchases to get lower prices. 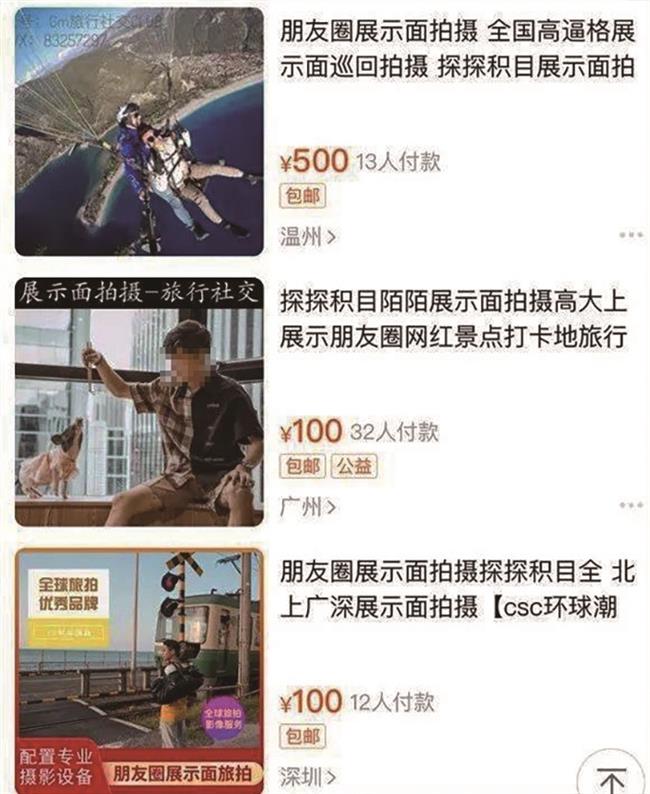 Li went on to list the various team purchases in the group, such as splitting the cost of a 500-yuan high tea for two at the Ritz-Carlton, with five other people; paying 125 yuan to share with 39 others a 5,000-yuan-a-night room at the Bvlgari Shanghai; sharing the cost of renting a 1,500-yuan Hermes handbag for a month among four people; and renting a Ferrari for a day, with 60 people paying the 6,000-yuan cost. The 600-yuan pair of Gucci tights were shared by two women.

Li’s post instantly went viral, with many netizens making ironic comments such as: “Splitting a pancake for tomorrow’s breakfast, anyone?”

Some netizens challenged the blog’s authenticity, especially after the Ritz-Carlton and Bvlgari said they have strict check-in measures to prevent room sharing.

Li hasn’t replied to the suspicions or updated his account.

The post, however, triggered many other posts revealing similar experiences. In one, a group chat exclusively for men released photos of lavish indulgences, with recommended texts to post alongside on social media. The group releases dozens of pictures every day.

For example, a picture of a gift-wrapped Rolex watch is recommended to be matched with the text “a gift to myself.” Wine-tasting photos suggest the text “relax” (in English).

Shanghai Daily searched for keywords like “high-end lifestyle” on e-commerce platforms and lifestyle communities like Taobao and RED, and came up with hundreds of search results. Many were deleted later as Li’s posts kept trending.

One result was a photography studio in Hangzhou, offering different sets of one-day photoshoots of lavish lifestyle pictures. One set was priced at 1,000 yuan, which included pictures with a Ferrari, onboard a cruise and a private room in a night club.

The seller told Shanghai Daily that sales have more than doubled since Li’s posts.

“Everything exists for a reason,” the seller said. “We are simply supplying rising demand. I don’t care what they do with the pictures afterward.”

The cost of impersonating high society is a small investment with possible bigger future returns, according to a 20-something university student based in Shanghai, who identifies herself only as Miranda. She said she joined group chats similar to the one described in Li’s post.

“I haven’t seen anything as ridiculous as sharing a pair of tights, but I did split afternoon tea and hotel rooms with some chat mates,” she told Shanghai Daily. “I’m not interested in hooking a ‘high-quality man,’ but I wouldn’t reject him if the opportunity came along.” 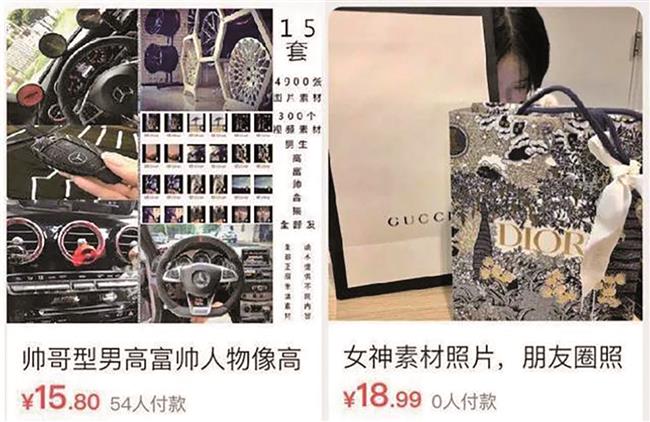 Photos of lavish indulgences, with recommended texts to post on social media, are sold on e-commerce platforms.

She said it was all part of her career plan. She wants to develop the persona of a fashionable, attractive young woman with a good taste. That’s why she posts selfies in art exhibitions, trendy new venues, scenic resorts and other hoity-toity places.

“I can slowly nurture myself into an influencer, and it would help with whatever career I choose,” she said. “I hear that some companies ask how many followers you have in job interviews. Of course, it would be even better if some agency or company saw the photos and turned me into an Internet star. That’s a good job now, isn’t it?”

When asked how she feels about lying on the Internet, Miranda replied, “I did go to these places. I never said I was rich. I can’t control other people’s perceptions, can I?”

The multi-channel network industry, or “influencer economy,” is among the fastest-growing around the world. Last year, Business Insider estimates that brands were ready to spend up to US$15 billion on influencer marketing by 2022.

Many Insta-glam influencers are turning their humble realities into virtual disparities — modest incomes and small rented apartments versus glamorous outings in designer clothes.

It doesn’t always work out as planned. Fake German heiress Anna Delvey, born Anna Sorokin outside Moscow, scammed her way into New York elite by regularly posting pictures of herself in private jets and at lavish banquets and expensive hotels. In the process, she swindled hotels and a private jet firm out of almost US$200,000 and attempted to bilk a US$25 million loan from a hedge fund. She was convicted of swindling by a New York court and sentenced to 12 years in jail.

One Instagram account called BallerBusters, with 87,300 followers is devoted to exposing such con artists by posting contrary evidence such as receipts and crowd-sourced information.

In China, this industry has about 6,500 agencies with a market scale of nearly 11 billion yuan, according to QianZhan (Forecast) Industry Research Firm. The firm’s report said the industry began in 2012 and has skyrocketed since 2017.

Shanghai Daily found one such agency that said it represents about 30 influencers, negotiating them marketing and advertising contracts on various social media platforms. It charges between 500-100,000 yuan per post, depending on the content and the influencer’s number of followers. Commissions are also possible in posts related to shopping.

“Of course, they need to create an online persona to attract and retain fans, and we have the training to do that,” the company said. “But it’s not too far from reality. Who doesn’t have a hidden side? Who really believes that everything posted on social media is true? This is just a business.”