As a big event approaches, eSports flexes its muscles 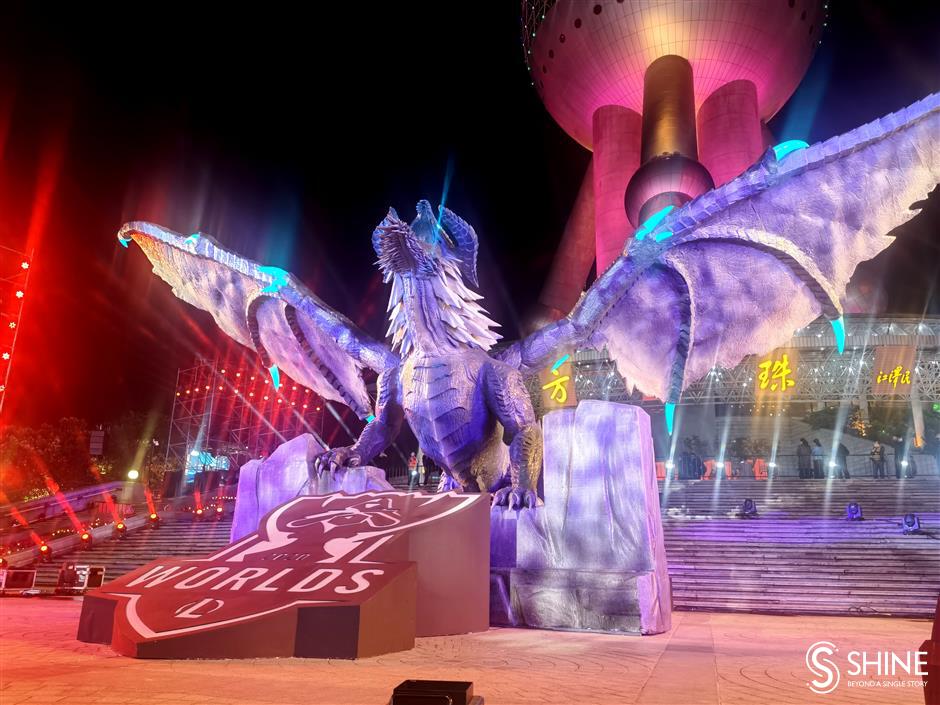 An 8-meter-high dragon sculpture was set up in front of the Oriental Pearl TV Tower for the final of the 2020 League of Legends World Championship.

For online gaming fans, this weekend is as anticipated as the FIFA World Cup or NBA Finals for followers of those sports.

On Saturday, the new Shanghai Pudong Football Stadium will host its debut event — the final of the 10th season of the League of Legends World Championship, also known as S10.

The stadium opened just last month. It is designed to meet the requirements of FIFA A-level competitions and has been designated at a venue for the 2023 AFC Asian Cup.

The 140,000-square-meter stadium has a unique “bowl” design that maximizes the view to the pitch from all the 33,765 seats, while at the same time creating an intimate atmosphere for spectators. For Saturday’s event, only 6,000 spectators will be present in person, in keeping with coronavirus health and safety regulations.

The fact that an eSports championship will be held in such a prestigious sports arena shows how far the online gaming industry has come in a short time. 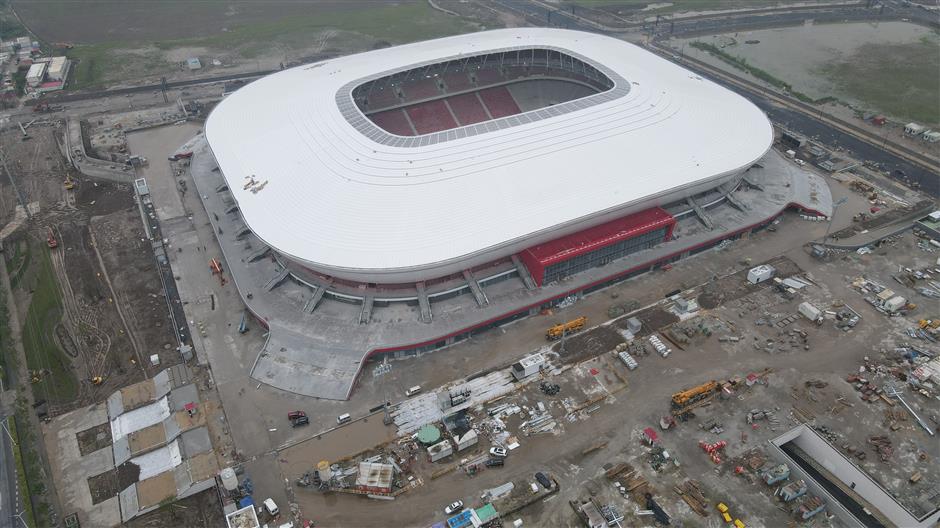 An aerial view taken in September shows the Pudong Football Stadium, where the League of Legends World Championship final will be held, nearing completion.

Yu Qian, a former eSports player who now works as a manager with local eSports venue designer Shanghai YJ Entertainment Co, recalled how he played Blizzard’s “Warcraft Ⅲ” with the other gamers in cyber cafes two decades ago. Those were the only available venues.

“Back then, people in China didn’t have much of an idea about eSports,” he said. “Cyber cafes that held matches, and grassroots master players formed teams to compete.”

No more. The Chinese government is lending its substantial weight to promoting development of eSports. Places especially set up for eSports matches and events are springing up all over the country. Amid the flurry of activity, Shanghai is building a reputation as a “capital of eSports.”

A report issued late last year on China’s eSports industry said Shanghai has about 35 eSports venues and more than 80 percent of the nation’s eSports companies, clubs, teams and livestreaming platforms. The city hosts about a third of eSports matches in China. 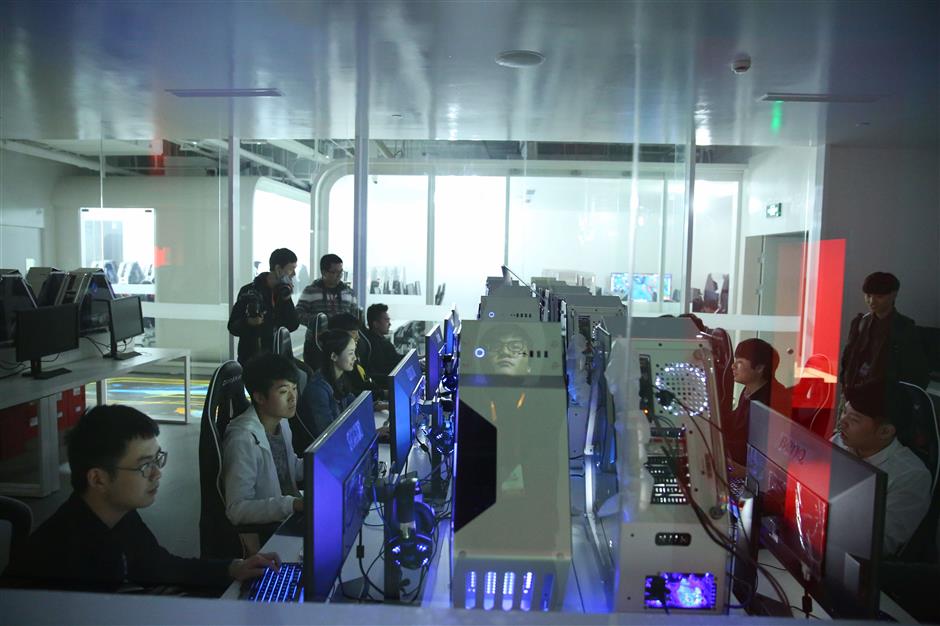 Training rooms are available for eSports teams to practice at the 666 Esports Center in Jing'an Sports Center.

Shanghai has been actively cultivating the industry. eSports has now become a credited major at some colleges. The city also has unveiled guidelines to encourage the construction of eSports venues, setting forth four categories based on size and capacity.

Yu, who is a member with the Shanghai E-Sports Association, participated in drawing up the guidelines. He said he believes the four-tier classification system will encourage construction of smaller as well as large venues.

“Under this system, less well-heeled investors can build eSports venues, which will encourage wider participation,” he said.

Dai Yanmiao, an associate professor specializing in eSports at the Shanghai University of Sport, praised the new guidelines for eSports infrastructure.

“On one hand, they meet the needs of eSports matches of different sizes,” he said. “On the other hand, they can help prevent unnecessary, duplicate construction.”

At the Jing’an Sports Center on Jiangning Road, 666 Esports Center, a third-tier venue among the first 11 approved in Shanghai this year, is one of the city’s earliest sites specializing in eSports. 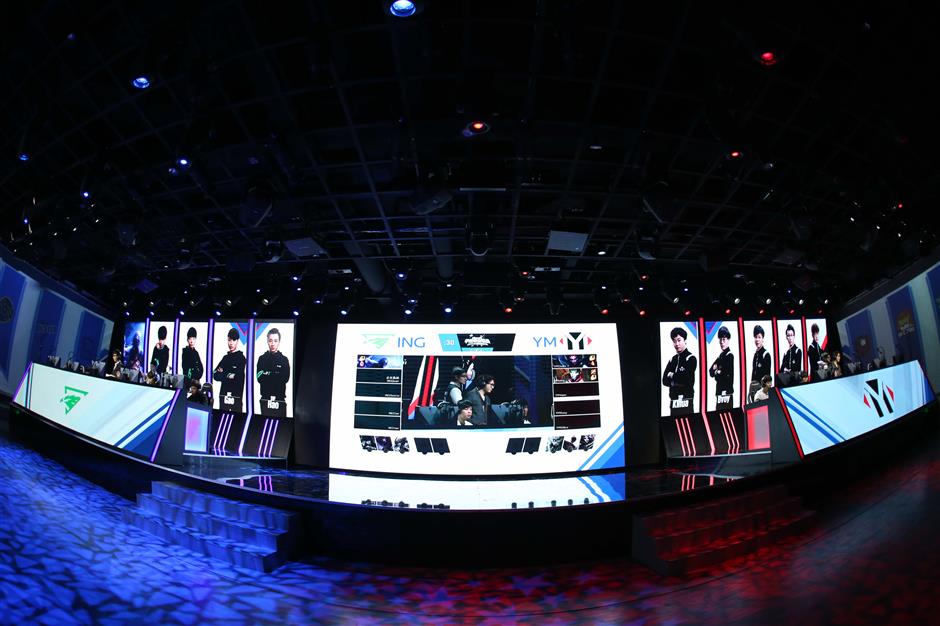 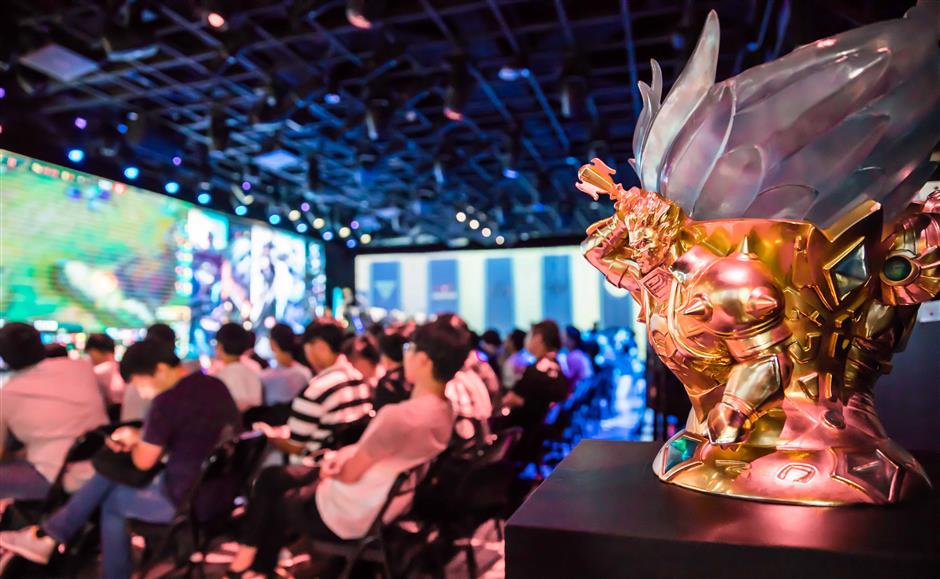 Zone B, the main hall at the 666 Esports Center, has a stage and retractable seating.

Its owner, Shanghai Oh My God (OMG) Sports Co, opened the facility in 2017 after three years of design and construction.

“OMG is an eSports club whose players are active in ‘League of Legends’ matches,” said Ma Kai, general manager of 666 Esports Center. “It’s an offline site for players to practice their skills and for fans to enjoy the matches.”

Ma said the facility is divided into three parts that represent the past, present and future of eSports.

“In Zone A, there are training rooms for eSports teams to practice,” he told Shanghai Daily. “The rooms look very much like the settings of cyber cafes, where players used to congregate.”

Zone B is the main hall, with a stage and rows of seating. The seats and their stairs are retractable so they can be removed if an event needs more space. 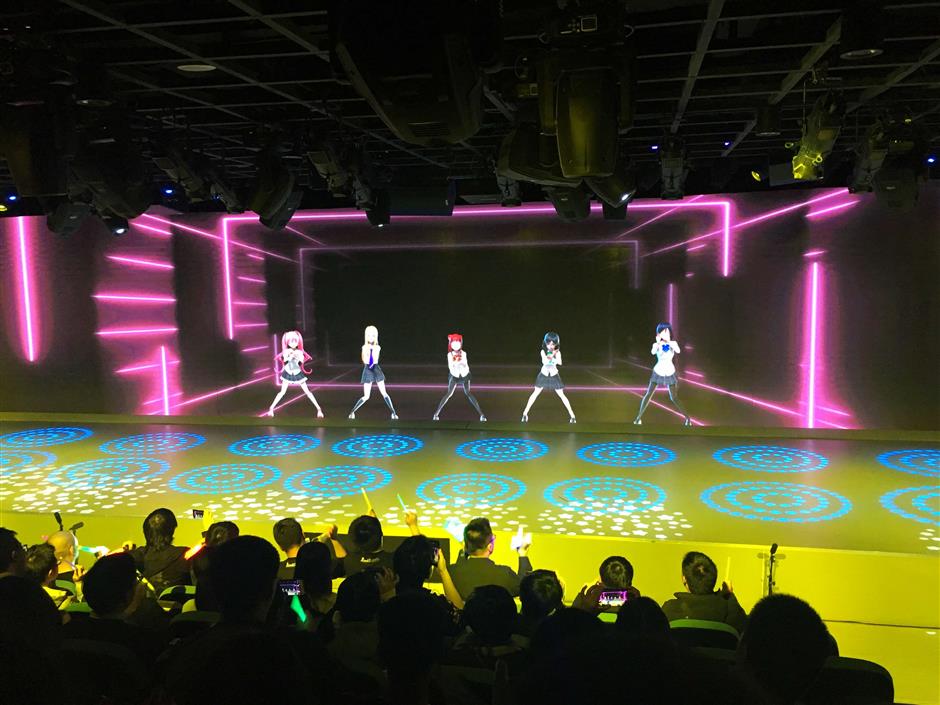 The Electronics Sports Park in Putuo District has the interior vibe of a sci-fi movie. It hosts special events for fans.

“Here we have all the professional workers and facilities needed for an eSports match or event,” Ma said. “That can save an event organizer time, energy and money.”

Zone C, a large cocoon-like structure, encapsulate a vision for the future of eSports.

“In the future, the idea of eSports won’t be restricted to games,” Ma said. “It can include matches with drones or robots. eSports then can be applied to fields like science and technology, national defense and children’s educational development.”

For the present, Ma and his colleagues are striving to promote eSports in a wider variety of channels, including television drama. The center hosted the filming of the TV drama “Go Go Squid,” a popular romantic drama themed on eSports. 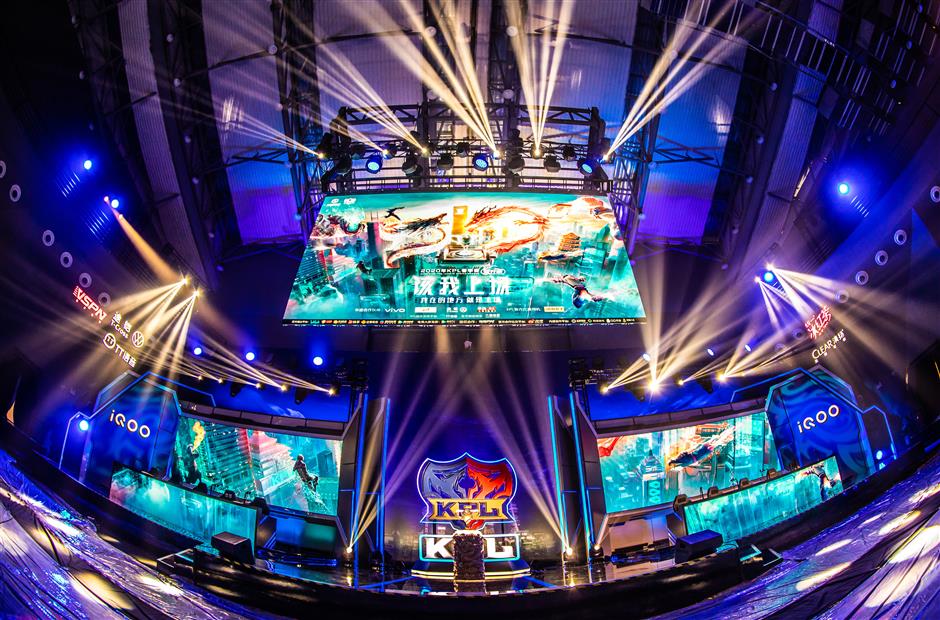 The Electronics Sports Park in Putuo District can accommodate 1,000 spectators.

Ma envisions 666 Esports Center as a future center of “pan-entertainment.”

“Maybe we will introduce things like a restaurant, pub, cinema or other entertainment forms into eSports venues in the future,” he said.

In Putuo District, the Electronics Sports Park on Tongpu Road is an approved second-tier venue that went into operation in late May. It didn’t open to audiences until mid-September because of the coronavirus pandemic.

It’s the city’s first independent facility for professional eSports matches and serves as the home court of the King Pro League, a tournament based on Tencent’s game “Honor of Kings.”

The six-floor venue, which looks like a theater, can accommodate 1,000 spectators at a game. It also has enough room to host special events for fans and related activities. 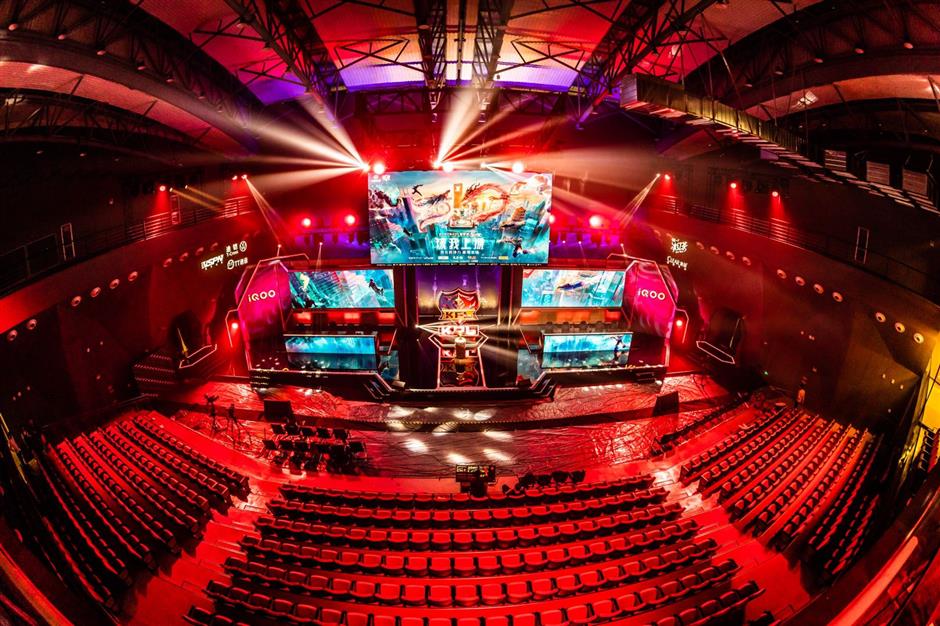 The Electronics Sports Park in Putuo District has enough room to host special events for fans and related activities.

“There are only four local venues rated as second or first tier in Shanghai.” Liu said. “The other three are either cultural or sports centers. Only the Electronics Sports Park venue is exclusively for eSports.”

That will help eliminate the need to hold eSports matches in rented shopping mall sites, where organizers have to dismantle and haul away all the equipment after games.

“We made great efforts on the venue’s design,” Liu said. “We have a huge LED screen, which we have to position very exactly to make sure it shows the action of players on both teams without letting either side see what the other team is doing to prevent possible cheating.”

“You may think that the majority of our spectators are male,” he said, “but, in fact, there are a large number of ladies who also love watching the matches.”

With eSports facilities being built at a faster clip under government support, some in the industry say care must be taken so constructions doesn’t occur where demand is limited.

“If one builds a large eSports venue in a less advanced area, where not many matches will take place, it will be a waste and cause huge losses,” Yu said.

“In the long-term, it’s good to have more venues and, therefore, more events,” he said. “But in short term, the surge in new venues could heighten competition and threaten the very survival of some of them.”