Pandemic aside, Shanghai continues the business of being best

Shanghai’s commerce, though impacted by coronavirus, keeps its forward thrust. Shanghai Daily has selected some of the important business stories of 2020 that showcase the city’s undaunted spirit.

Ant Group's listing was suspended two days before its scheduled start, with the Shanghai Stock Exchange saying the fintech giant may not have met the STAR Market's listing requirements.

Ant was expected to raise 115 billion yuan (US$16.9 billion), without an overallotment option, after setting its offer price at 68.8 yuan a share.

The People’s Bank of China and the China Banking and Insurance Regulatory Commission said in a draft rule one day before the listing suspension that online microlenders should have funds to cover at least 30 percent of any joint loan with financial institutions.

On an industry level, that lowers the risks associated with microlending and its relationships with other institutions.

Moody's Investors Service said it expects the client bases of the microloan subsidiaries of big Internet companies to shrink significantly. It cited a new rule that such businesses will be restricted to borrowers in the province where they are registered, unless they obtain an exemption from regulators.

"Too-big-to-fail" risks were cited by Guo Shuqing, head of the banking and insurance regulator, in a speech at the Singapore Fintech Festival earlier this month.

The micropayment market is currently dominated by a few technology companies, he noted.

"Some big tech platforms operates cross-sector business and conduct financial and technology activities under one roof,” Guo said. “It's necessary to observe the spillover of complex risks and take timely and targeted measures to tackle those risks."

Existing digital services, such as payments, customer management and online promotions remain an attractive chunk of business for Alibaba’s Alipay, providing an important link between offline merchants and services and online population.

Ant's online lending division, which includes short-term lender Huabei and short-term consumer loan provider Jiebei, contributed close to 40 percent of revenue in the first half of the year.

Sun Pengcheng, a partner of Da Cheng Law Firm, said he expects the listing process to resume soon. He said regulatory oversight from the financial watchdog will keep financial services in line and provide the opportunity for leading players with stricter compliance measures to eliminate smaller ones. 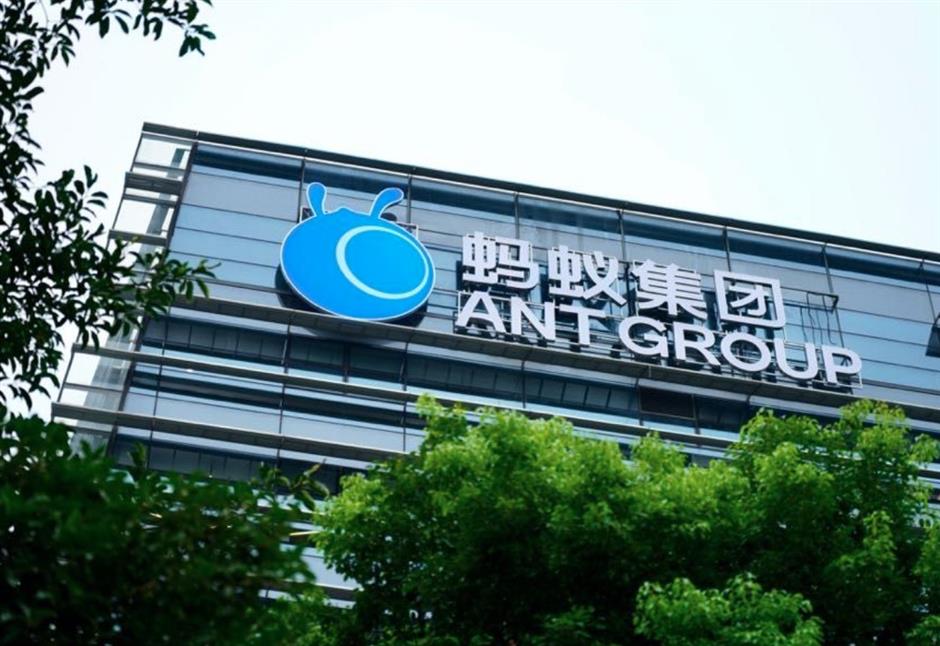 The office building of the Ant Group

In 2020, US electric carmaker Tesla delivered the first group of made-in-China Model 3 sedans to the public in a milestone for the company’s Shanghai Gigafactory.

The US$2 billion plant was turning cars off the assembly line in just 357 days, a record for global automakers in China.

Tesla also announced this year that it plans to build a manufacturing facility for superchargers in Shanghai. It is expected to be operational in the first quarter of 2021.

The 42-million-yuan plant will research, develop and make charging poles for electric cars, with a capacity of 10,000 poles a year, mainly V3 superchargers.

The move is expected to accelerate the popularity of V3 superchargers as an efficient way to give electric cars a range of 250 kilometers after a 15-minute charge.

In addition, the automaker will establish a new research and development center at its Shanghai Gigafactory.

The factory aims to manufacture 150,000 Model 3 sedans this year and has begun exporting vehicles to Europe.

Shanghai worked closely with Tesla to speed up construction of the factory – part of the city’s campaign to bill itself as a good business environment.

The plant integrates Tesla’s most advanced technologies and is hailed as a global example of innovation, efficiency, technology and environmental protection.

Tesla credited the city’s drive for innovation and manufacturing vitality, and its talent pool for the decision to build its first overseas super factory in Shanghai. 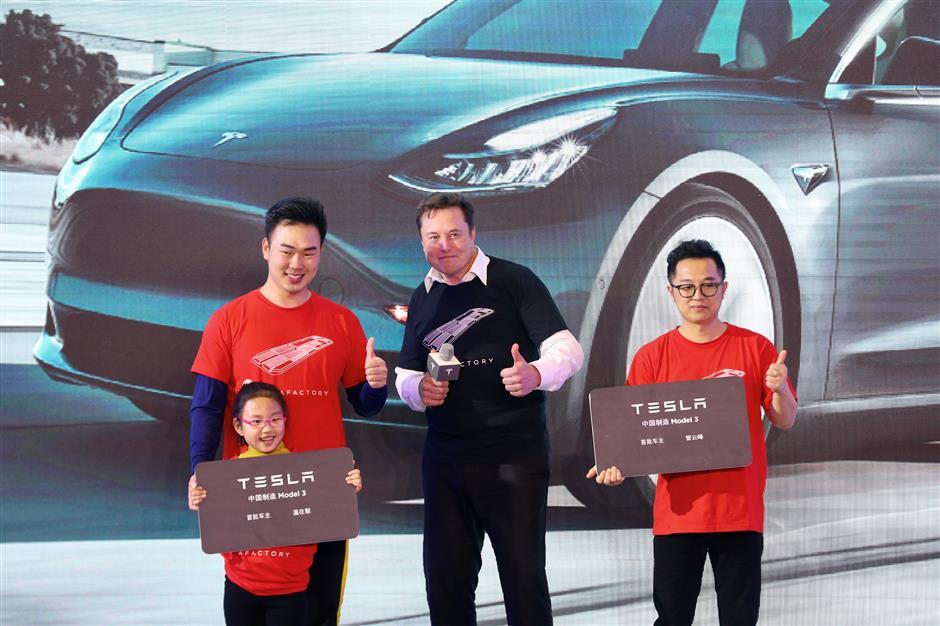 Shanghai basically fulfilled its 2020 goal of becoming an international financial center, and is now trying to build on that success by expanding that achievement into financial technology.

Shanghai leapt to third place among global financial centers, according to the 28th Global Financial Centers Index, which tracks 121 cities.

That honor came despite the continuing uncertainty surrounding international trade amid the COVID-19 pandemic.

“The city is very well-positioned to adapt to changes more quickly and more successfully than many other cities with its strong, efficient financial infrastructure. The trends of digital technology and sustainability will further strengthen its magnetic attraction as a global city,” said Mark Wang, president and chief executive officer of HSBC Bank (China).

In 2019, the trading volume of the city’s financial markets totaled 1,934 trillion yuan (US$259.4 trillion), an almost eightfold increase in just 10 years.

By the end of last year, the number of licensed financial institutions in Shanghai had reached 1,646.

Insurance giant AXA first arrived in China in 1999, choosing Shanghai from the outset to be its headquarters.

“We look forward to continuing to accompany Shanghai on its journey to becoming a truly global magnet for talent, creativity and investment over the years and decades ahead,” said Zhu.

Standard Chartered China said the city has long been a window on the nation’s reform and opening-up policies, and Shanghai will continue its preeminent position.

HSBC cited the establishment of Shanghai Financial Court in 2018 as a major step forward in building a law-based, better business environment for investors.

Christine Lam, chief executive of Citi China, said Shanghai has always been at the heart of the bank’s business in China.

“Policymakers and global businesses are both eager to see Shanghai open up even further,” she noted. “As a leading global bank, we see more opportunities for us in Shanghai.”

Financial technology will be a dominant factor in the future. Shanghai is well-positioned to grasp that challenge, according to the Shanghai Financial Services Office.

Riding on its current achievements, Shanghai will further focus on allocating superior resources, optimizing the business environment and guarding against financial risks to better serve the development of China's economy, it added. 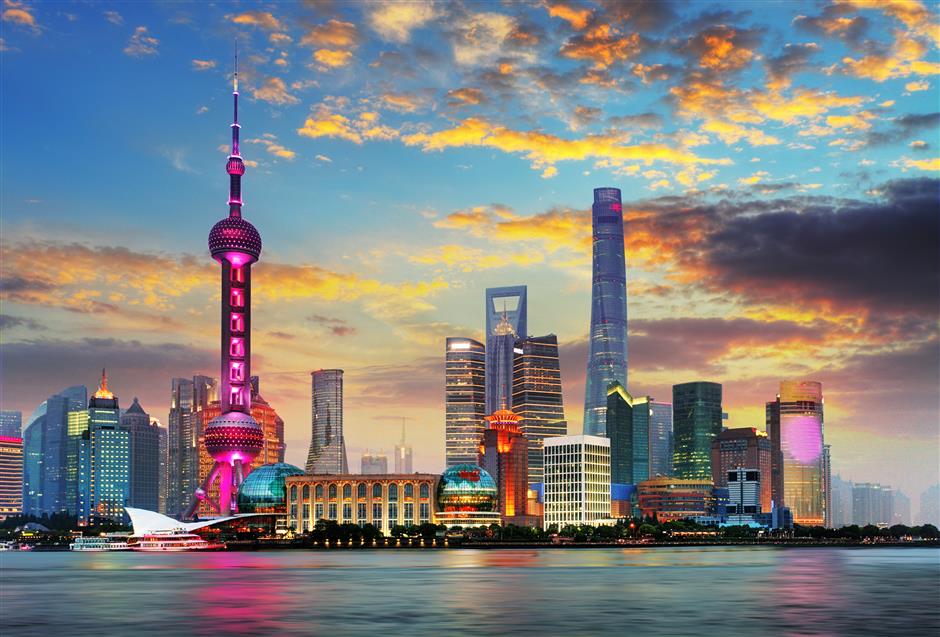 Shanghai held a shopping festival in May and June this year to reboot the economy as the pandemic eased. It offered deals by dozens of retailers, digital platforms and entertainment sites.

The city’s first Double Five Shopping Festival led to sharp increases in online and offline sales. More than 520,000 online merchants and over 100,000 offline businesses participated in the festival, according to the city’s Commission of Commerce.

During the festival, 200 of the largest commercial companies in the city accrued aggregate sales of about 70 billion yuan, an increase of 4.5 percent year on year.

Offline sales reached 284.6 billion yuan over the two months, jumping 12 percent from the prior two months and recovering to the year-earlier level.

"We've stayed at home for too long amid the pandemic, and it feels great to get out and shop again,” said a 39-year-old engineer surnamed Tang, while shopping with his family at a mall in May.

"The big discounts during the Double Five Shopping Festival were no doubt a powerful spur for us to do some shopping,” he explained.

Meanwhile, the number of express shipments arising from online sales in Shanghai totaled 500 million, up more than 20 percent from a year earlier.

The pandemic hastened the integration of online and offline sales, a reflection of the increasing digital presence in retailing.

"The shopping festival sent a strong signal of economic recovery and boosted the confidence of investors at home and abroad," Hua added. 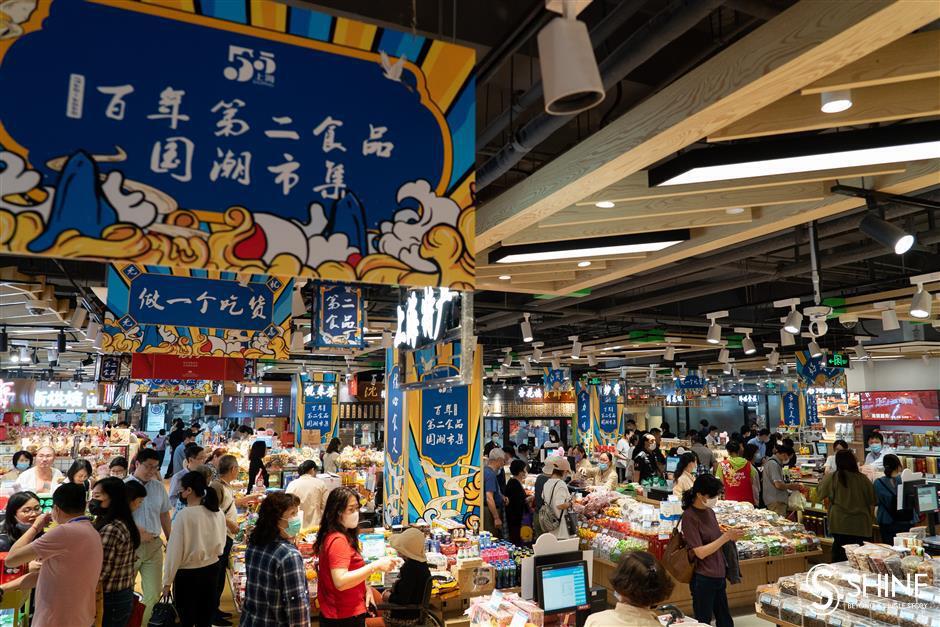 People are seen busy shopping at a food store during the Double Five Shopping Festival in Shanghai.

In the first 10 months of this year, Shanghai reported a paid-in foreign investment of US$17.18 billion, rising 6.2 percent from a year earlier.

Forty-three multinational companies have located their regional headquarters in the city this year, bringing the total to 763. In addition, 16 new research and development centers were set up in Shanghai.

“After the test of the pandemic, companies are even more confident in Shanghai,” said Wu Changfei, head of the Minhang Investment Promotion Center.

He told Shanghai Daily that a technology startup founded by a Chinese entrepreneur and now based in Switzerland has indicated it wants to move its research center and headquarters to Minhang. He didn’t identify the company.

The group cited the city’s endeavors in tackling the pandemic and its development of alternative ways of working.

Shanghai has been accelerating its business reforms and improving its business environment over the past two years. That helped move China from 78th place to 31st in the World Bank’s “Ease of Doing Business” rankings.

China also features among the top 10 economies with the biggest improvements in business environment for two years in a row. In July, the World Bank released a report entitled “China’s Doing Business Success: Divers of Reforms and Opportunities for the Future.”

“Shanghai must constantly improve its business environment to succeed at development initiative, instead of just depending on incentive policies,” Shanghai Party Secretary Li Qiang said during the conference.

It beat China's Suning 3:1 in front of 6,000 on-site fans at the newly opened Pudong Football Stadium.

The match was also broadcast online to about 200 million people, who stayed glued to their digital gadgets for over three hours.

It reinforced the city’s commitment to becoming a global “eSports capital,” despite many world events forced to be cancelled or delayed because of the pandemic. 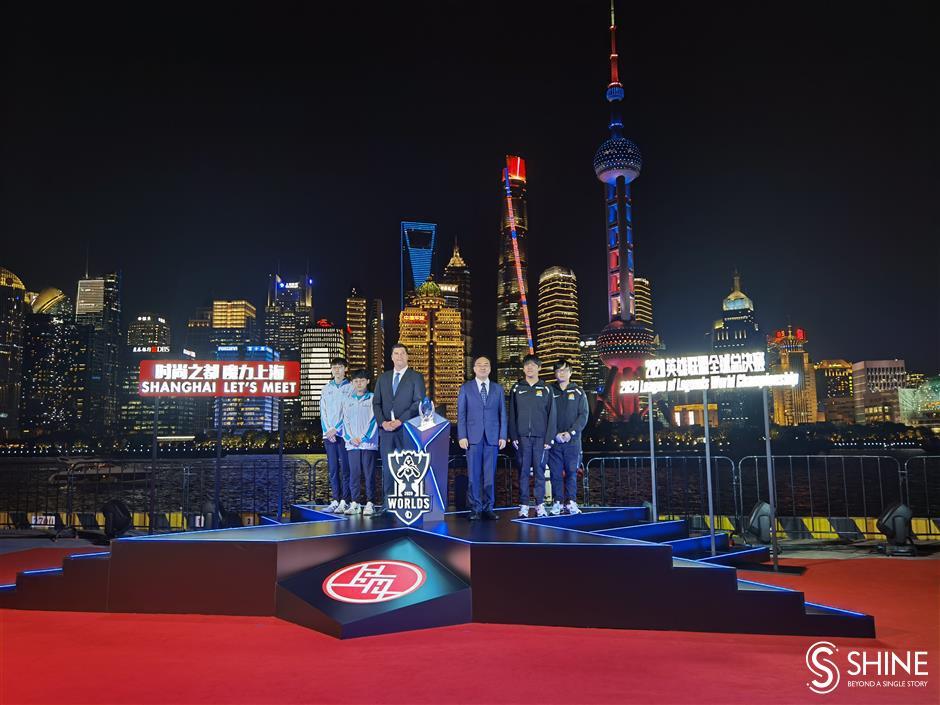 Shanghai Deputy Mayor Chen Tong (third from right) and Riot Game CEO Nicolo Laurent (third from left) light up a crystal symbol of LPL one day ahead of the 2020 League of Legends World Championship, known as S10, in October in Shanghai.

“We can’t think of a better place than Shanghai to hold such an event,” said Riot Games Chief Executive Nicolo Laurent.

Shanghai has undertaken a series of steps to support the eSports industry such as increasing the number of venues, hosting top events and setting up eSports majors in colleges.

Some of the city’s major competition organizers and eSports companies have received government subsidies. The application and approval procedures for eSports-related activities are also being accelerated.

ESports, an integration of games, sports and entertainment, has become a catalyst to boost the digital economy.

In the first half of the year, revenue in the China eSports market reached 71.9 billion yuan (US$10.6 billion), a 55 percent increase from last year. The eSports user base reached 484 million by June, according to industry figures.

During the S10 event, a dragon sculpture, music and dance performances, and various other carnival activities were held in Shanghai. The event also stimulated online traffic for Shanghai-based Bilibili, a major partner and broadcasting platform of S10. It also fueled online sales of e-commerce websites, especially gaming gadgets from computers, graphic cards and screens to keyboards.

Several high-profile eSports events have been held in the city this year.

Semiconductor Manufacturing International Corp, the biggest chipmaker on the Chinese mainland, floated shares in July in the biggest initial public offer to date on the Shanghai STAR Market.

Its capitalization of about 469.6 billion yuan makes it the biggest company by market value on the innovation board.

Also listed in Hong Kong, SMIC sought the domestic listing to boost development of the Chinese semiconductor industry. It became a poster child of China’s campaign to attract more high-tech firms to list domestically, especially on the new STAR Market.

Besides SMIC’s listing, firms related to semiconductor materials and equipment, chip design and integrated circuitry are listing or planning to list on domestic markets, including STAR.

The move comes as the US has tightened controls over technology exports to China.

“The SMIC listing shows the flexibility and innovation of the domestic capital market, as well as the support for key technological innovation,” said Zhou Zixue, SMIC’s chairman.

The rapidly growing STAR Market debuted a year ago. As of December 11, more than 200 technology firms have listed on the market. 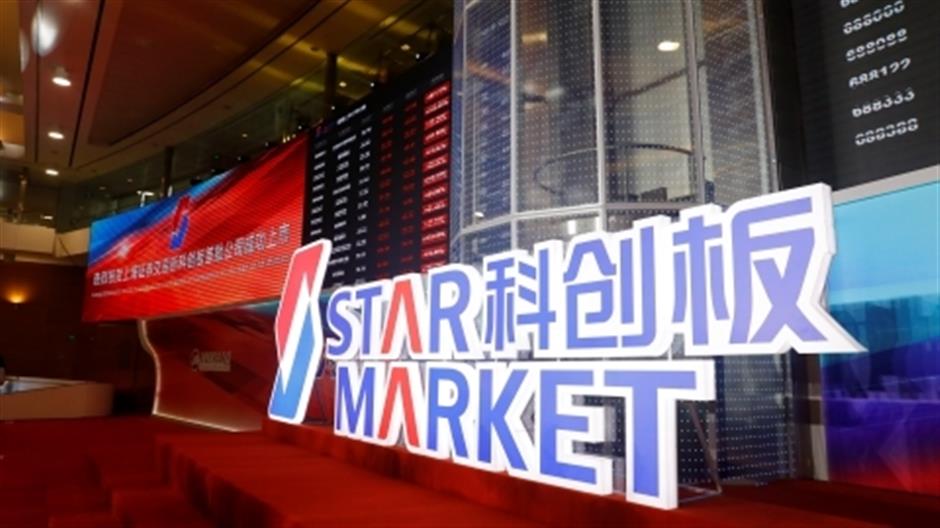