Having spent two years in Beijing, where he was captivated by the Chinese capital's rich architectural heritage, Vasileios Koniakos was not particularly excited at the prospect of working in Shanghai at first.

That was, of course, until the city grew on him as he discovered its many facets.

"Shanghai has something for everyone," said Koniakos, who was appointed as the consul general of Greece in Shanghai in 2019.

The diplomat described the city as a charming mix of old and new. 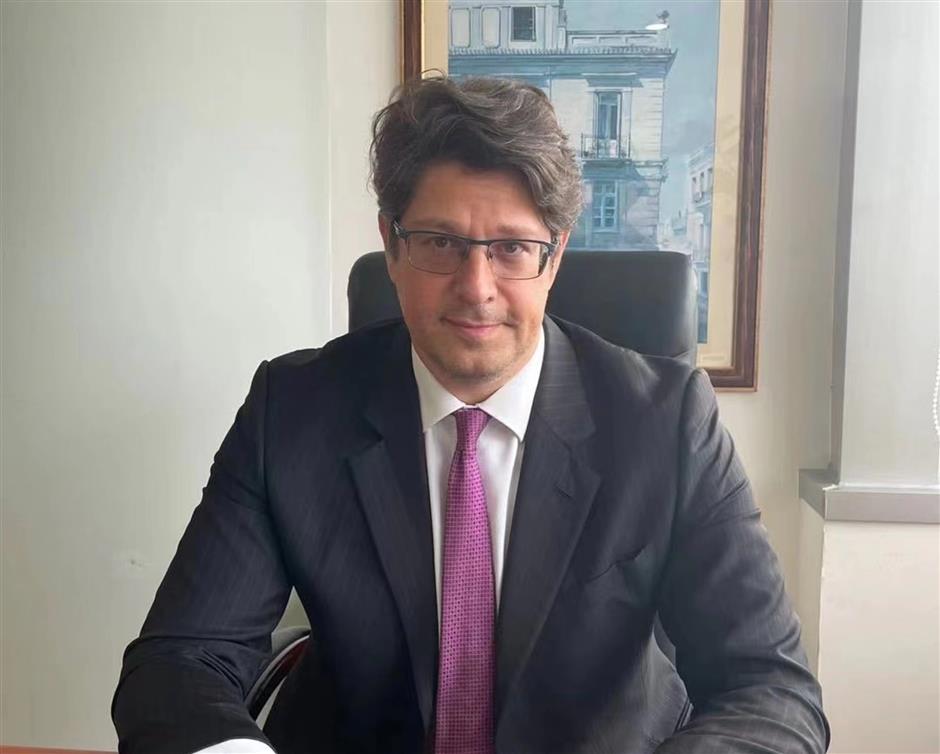 Shanghai has long had sister-city ties with Athens and Piraeus, which has greatly facilitated cultural, educational and cross-border trade.

The annual China International Import Expo has played a significant role in promoting Greek products to the Chinese market.

One of the upcoming collaboration projects is the exhibition "Thalassa. The Sea in Greek Art from Antiquity to the Present," Koniakos said. It is scheduled to open at the Shanghai Museum around mid-July.

This year, China and Greece are marking the 50th anniversary of the establishment of diplomatic relations.

He believes that Greece-China cultural relations are a major player in promoting bilateral cooperation.

The consul general's interest in Chinese history and culture is reflected in his Confucius-influenced Chinese name Kong Nige 孔尼舸. He believes the Chinese philosopher compares very well with the Greek thinker and scholar, Socrates. 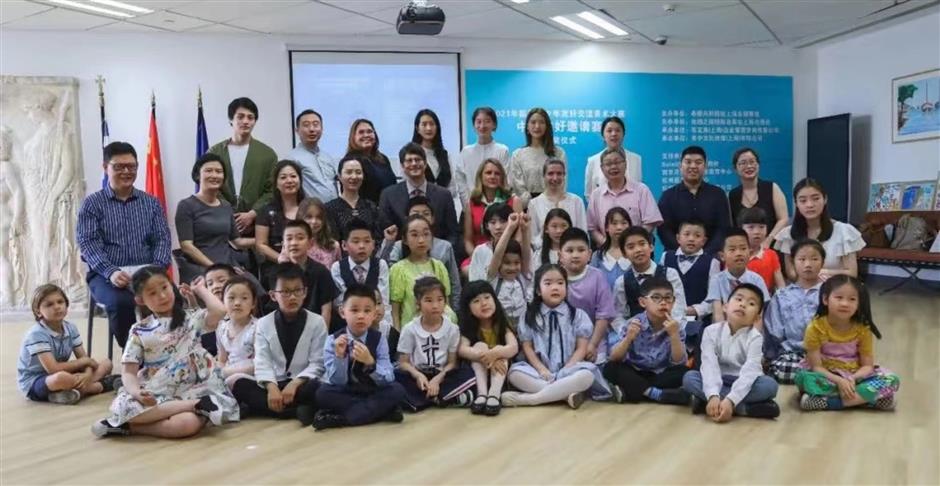 A cultural event held at the Greek Consulate General in Shanghai

Q: When was your first trip to China?

A: My first trip to China was in 2014 when I was posted at the Greek embassy in Beijing. I was always attracted by the idea of immersing myself in the culture of a country with a long history and a great future, and one so influential on the course of humanity. Then I went back to Athens, but I was just unable to shake off my overwhelming desire to return to China and to the very heart of its economy and driver of growth and innovation, which is Shanghai and the Yangtze River Delta region.

Q: How many Chinese cities have you visited?

A: I have traveled extensively in China and have visited more than 20 cities over the past three years. Obviously, they are not nearly enough as I would have liked, but it is still quite a lot, given the current circumstances. I've always been fascinated by the combination of natural beauty and rich culture and history. Very few countries can offer such a comprehensive life experience. 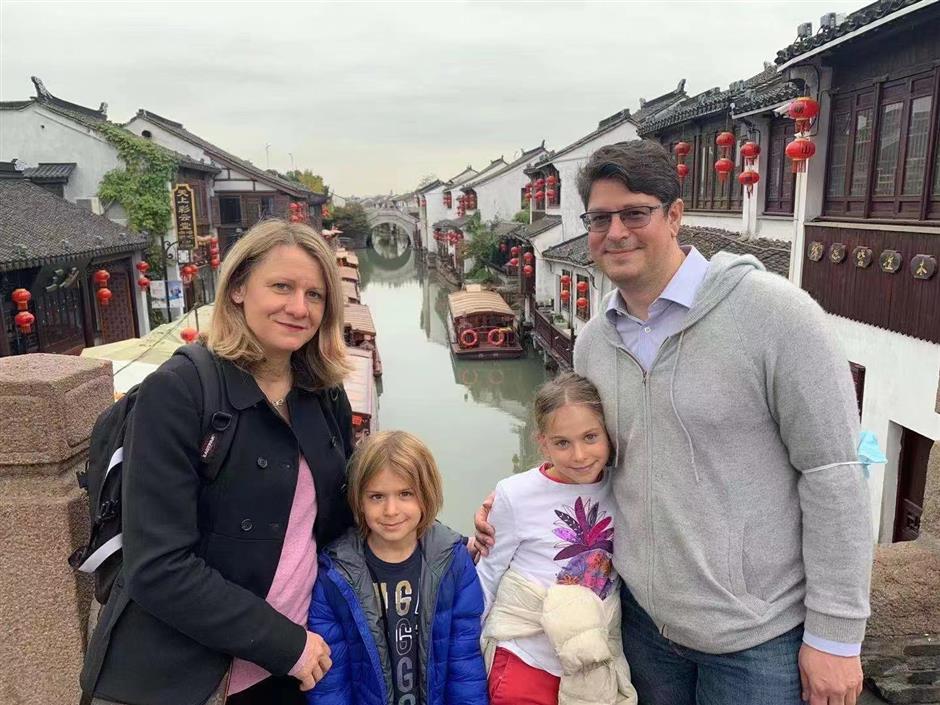 With family on a trip to Suzhou

Q: How is life and work in Shanghai?

A: After living in Beijing, a city with a millennia-long history and landmark ancient monuments, I wasn't blown away by Shanghai when I first arrived here in 2019. But Shanghai grew on me as I learned more about its past, came to appreciate the beauty of its period architecture and its juxtaposition with modern architectural marvels, and met and made friends among its open-minded inhabitants, who were always eager to interact with foreigners and explore new opportunities.

Hongkou District, where the Greek consulate is located, is a dynamic but also sustainable part of Shanghai. Development coupled with respect for the rich traditional architectural stock of Shanghai is the way forward. It is rare to be able to walk out of your office and marvel at an ultra-modern Kengo Kuma building and then continue down on Sichuan Road N. all the way to Duolun Road for a coffee.

There is something for everyone in Shanghai. It has historically had a strong appeal to expats, and I am confident that once the city has triumphed over COVID-19, it will continue to do so in the future. 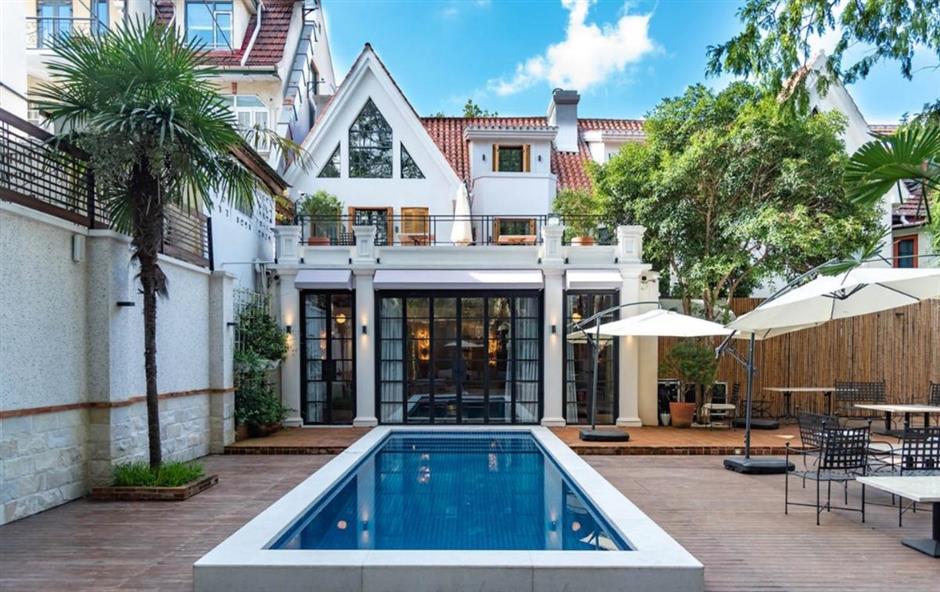 The Hellas House in Shanghai

Q: Any recommendations for locals to experience the Greek lifestyle here in Shanghai?

A: Hellas House is the venue that best embodies the Greek lifestyle in Shanghai, offering a wide range of services ranging from traditional Greek cuisine to event planning in an authentic Greek setting. 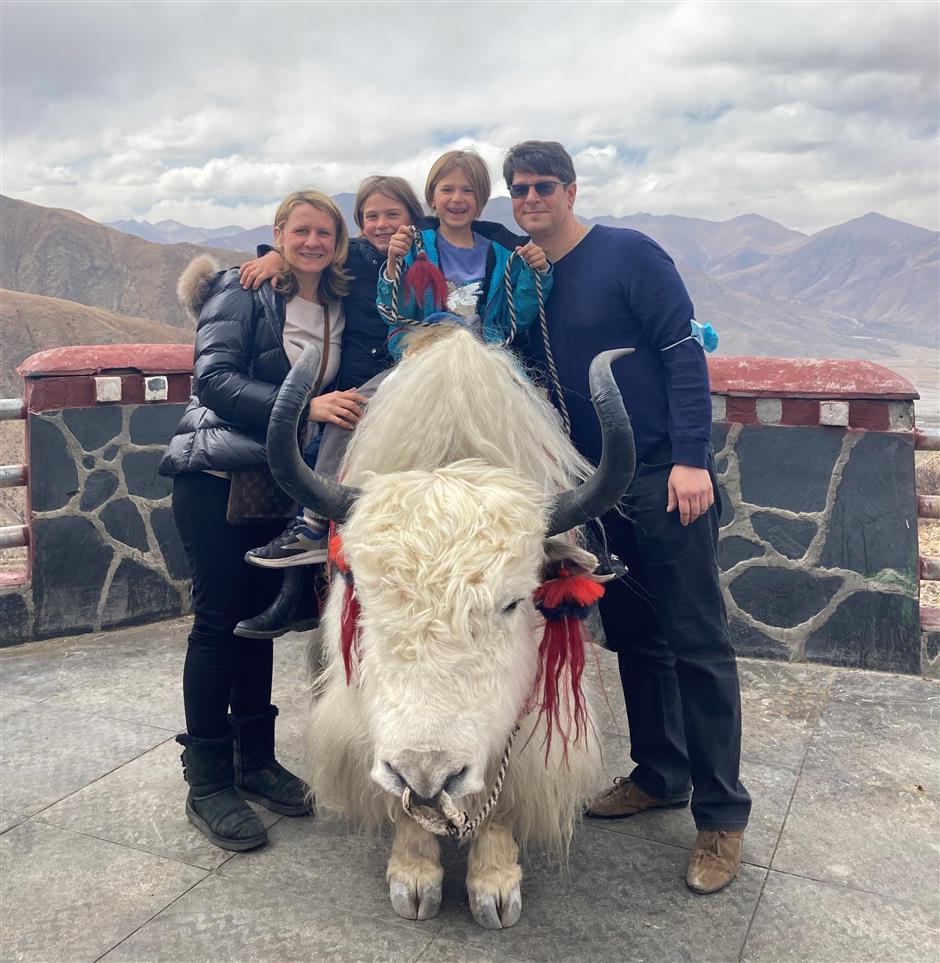 A family trip in Tibet

Q: Where did you get your Chinese name? Is there any significance to it?

A: My Chinese name was given to me by a Chinese intellectual friend, and I believe it is quite successful in merging Greece and China, as was the initial intention.

The first part of the name comes from the full name of the ancient Chinese philosopher Confucius, which is Kong Zhongni in Chinese. Many books have been written on the parallels between the philosophical thought of Confucius and that of the pillar of western philosophy, Socrates.

Like Confucius, Socrates did not pass anything down in writing and despite some opposing views, their philosophy is a practical one, focusing on the organization of everyday life which is the reason they both exercise a tremendous influence till today.

The second part of the name, Ge, means a big ship, probably the one that the ancient Greeks call βάρις. It was included in order to hint at a Greek origin since some Chinese believe that the origin of this type of ship is Greek. 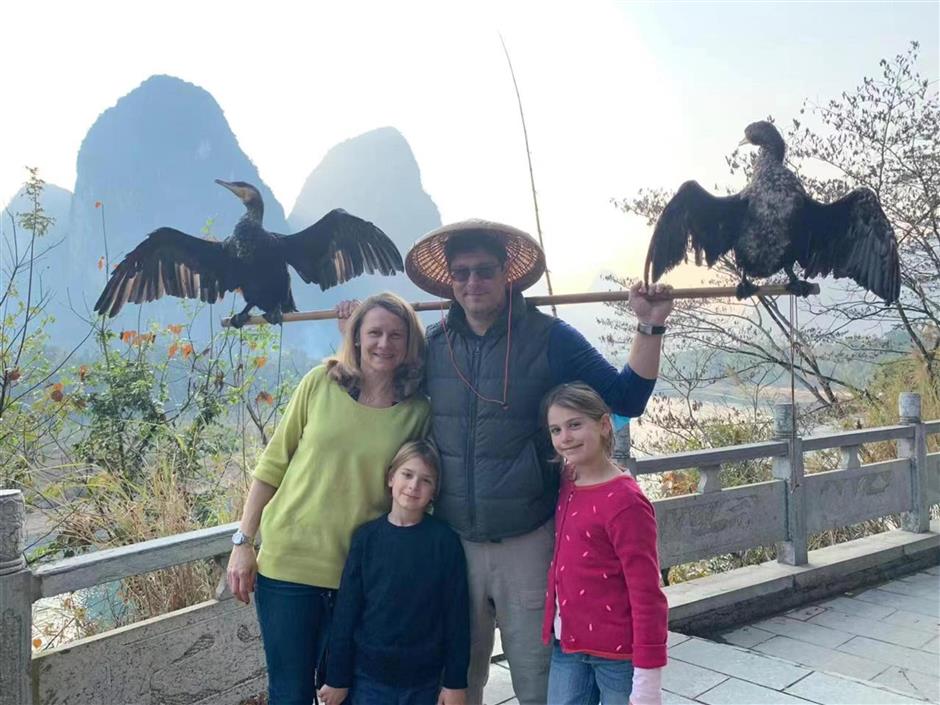 A family trip in Guilin of the Guangxi Zhuang Autonomous Region

Q: Greece and China are two of the oldest civilizations in the world. How would you describe their similarities?

A: Greece and China are two countries far away from each other in terms of geography but substantially close to each other in terms of cultural presence and creative interaction throughout the centuries. Greece and China are the heirs of civilizations that span millennia of continuous rich intellectual and artistic creation and are considered the cradles of Western and Eastern civilizations, respectively.

The cultural relations between Greece and China can be considered a significant competitive advantage of bilateral cooperation. Cultural relations provide a wide range of fields that promote mutually beneficial progress and encourage the creative dialogue of the two ancient civilizations.

I think that this spirit of creative cultural interaction and shared values is vividly highlighted by the bronze sculpture "Socrates and Confucius: A Meeting" that was unveiled at the archeological site of the Ancient Agora near the Acropolis in the center of Athens, the capital of Greece, at the opening ceremony of the "Greece-China Year of Culture & Tourism in 2021," last September.

Made by a Chinese sculptor and curator of the National Art Museum of China (NAMOC), Wu Weishan, the sculpture embodies a "dialogue" between the two ancient philosophers, reflecting the vision of mutually beneficial exchanges between the two civilizations.

I would like to take this opportunity to announce that around mid-July, the exhibition "Thalassa. The Sea in the Greek Art from the Antiquity to the Present" is scheduled to be inaugurated at the Shanghai Museum. Highlighting the sea as a major element of creative inspiration throughout Greek art, the exhibition is the result of a collaboration between the Greek Ministry of Culture and Sports and the prestigious Shanghai Museum. 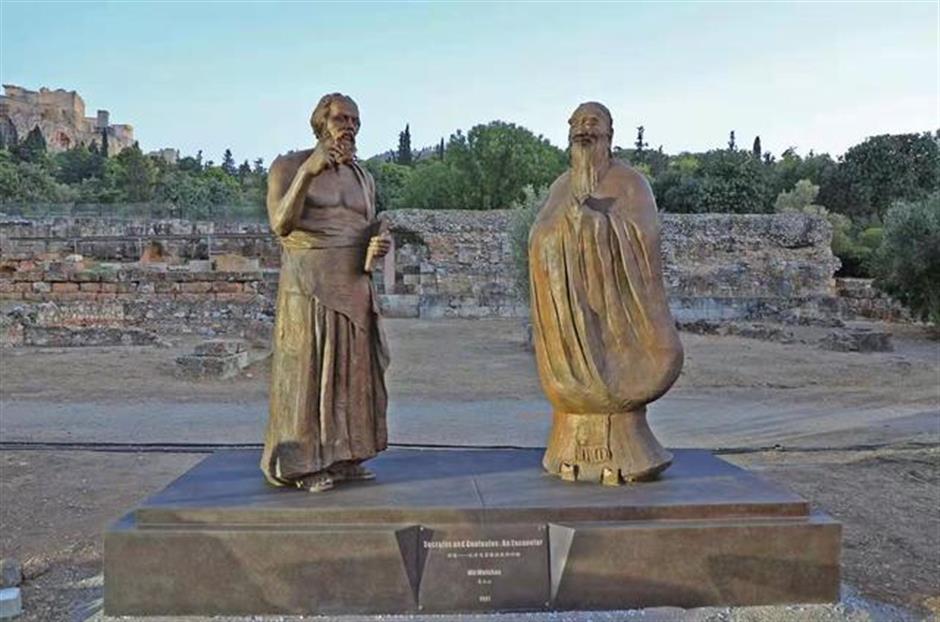 The sculpture "Socrates and Confucius: A Meeting" by Chinese sculptor Wu Weishan in Athens

Q: Greek agricultural products such as olive oil, wine and cheese are becoming increasingly popular in Shanghai. What about their trade in the city?

A: Greek agricultural products are very popular in Shanghai. I think that this popularity can be partly attributed to the consistent and quite successful presence of Greece at the China International Import Expo (CIIE), since its beginning in 2018.

At the 2nd CIIE, in 2019, Greece was a Guest Country of Honor, and Greek Prime Minister Kyriakos Mitsotakis was the head of the delegation that visited the CIIE. Last year, Greece participated in the 4th CIIE not only with a dynamic group of enterprises based in China but also with a virtual National Pavilion. We believe that CIIE has an important role in promoting exports of Greek products in the fields of food, beverages and spirits in the highly competitive and demanding Shanghai market.

In 2020 and in 2021, Enterprise Greece, the official investment and trade promotion agency of the Greek state, operating under the auspices of the Greek Ministry of Foreign Affairs, organized, in collaboration with the Consulate General of Greece in Shanghai, two high-profile Greek wine promotion events. The guests of the events enjoyed the presentation of select Greek high-quality wines and spirits by Chinese Masters of Wine and savored the pairing of Greek wines with fine tastes of Greek gastronomy and with Chinese signature dishes. 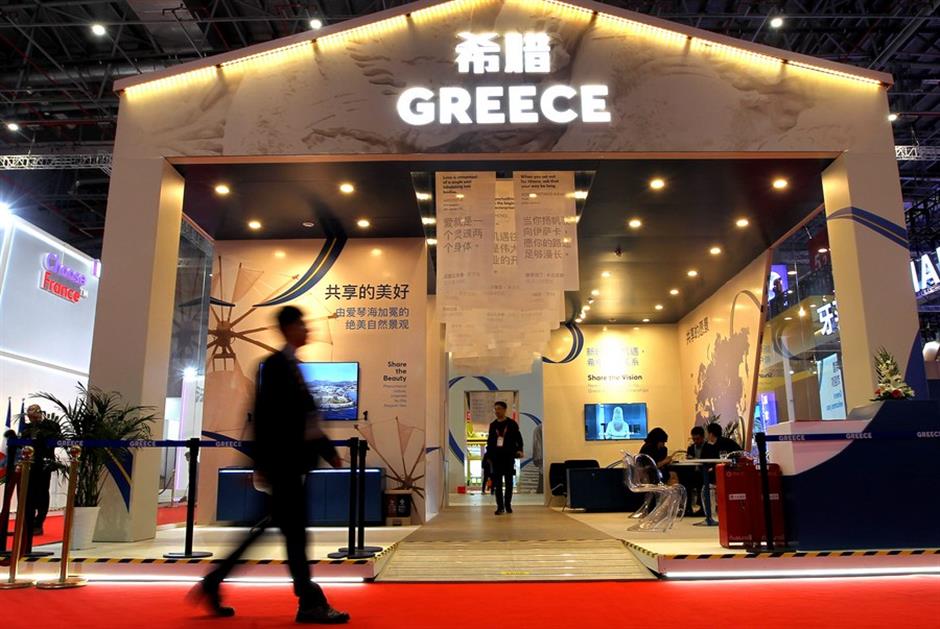 A visitor walks past the Greece pavilion during the second China International Import Expo (CIIE) in Shanghai on November 5, 2019.

Q: Shanghai and Piraeus became sister cities in 1985, and Athens in 2009. Can you tell us about the cooperation projects between Shanghai and these two cities?

A: Athens, Piraeus and Shanghai are three major cities with rich histories and a vibrant present.

The three cities share the traits of extroversion and dynamism.

The sister-city relationship connecting Athens, the capital of Greece, and Piraeus, the largest and most important Greek port, with Shanghai, sets the institutional framework for significant extrovert activities, among which are the development of cultural exchanges and the establishment of educational ties.

The collaboration of the Greek Ministry of Culture and Sports with Piraeus Port Authorities (PPA S.A.) regarding the reconstruction of an old and historic building within the Port into a Museum of Sea Antiquities that will showcase to visitors from all over the world the archeological treasures of the Greek sea can also attest to the multifaceted range of cooperation projects.

The museum will also include exhibition space for Chinese sea antiquities, allowing for even more dialogue between the two ancient civilizations. 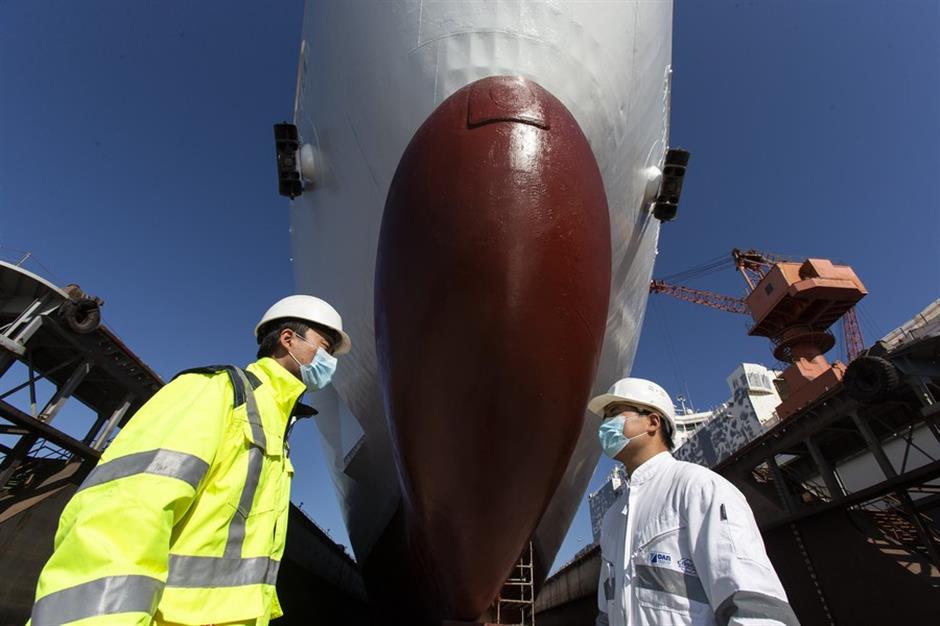 Q: How many Greeks live and work in Shanghai? What work do they do?

A: There are about 200 Greeks who live and work in Shanghai and are an important link between Greece and China.

They work mainly in the shipping industry as well as in multinational companies, and some of them teach at universities. Moreover, two major Greek investments are based in Shanghai and in the wider area of jurisdiction of the Consulate General of Greece, namely the factory of Shanghai Hitec Plastics in Pudong, and the factory of Kleemann elevators in Kunshan, Jiangsu Province.

Q: This year marks the 50th anniversary of diplomatic relations between Greece and China. What are the next steps in bilateral relations?

A: In my opinion, the two countries aim to deepen their traditional relations, expand their cooperation and confirm the bonds of friendship connecting the two peoples. Capitalizing on the achievements of the already fruitful cooperation, Greece and China can explore further opportunities for mutually beneficial synergies and work together to enhance collaboration in many fields.

I strongly believe that the future of Greece-China relations has been built on solid foundations: the warm and sincere friendship between the Greek and the Chinese people, mutual respect, common understanding, and mutual benefit.

To this end, I think that relations between Greek cities and Shanghai can be consolidated and integrated into the plans for the future, so as to expand the relations in new fields.